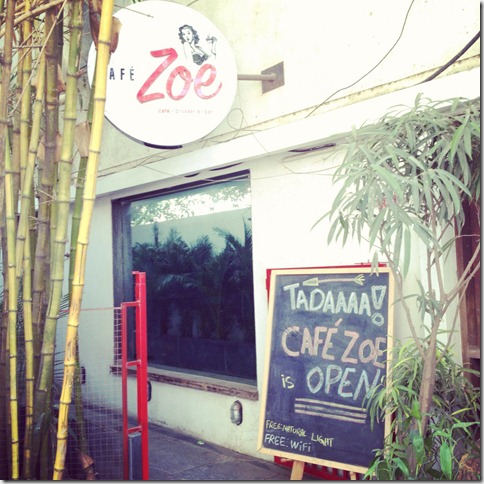 6th June 2012…Today, twenty nine years after my father passed away, I realised that our lunches at Jimmy's Kitchen or AAEI everyday after school, before he headed back to his chambers, are probably why I can never compromise on the quality of my lunch, even on week days

I stepped into Cafe Zoe the other day and fell in love with it immediately.

It seemed so right for a Monday afternoon. Relaxed without trying hard to be so. Sofas that called out to you...offering to soothe your ruffled brows. Chirpy cafe tables. The sun beaming in through the sky windows. Yet so pleasantly cool and colourful. Cosy and quaint. The sort of place where Harry met Sally. Again and Again. A place so far removed from its gritty surroundings. The sort of place that made Mondays seem like Sundays. 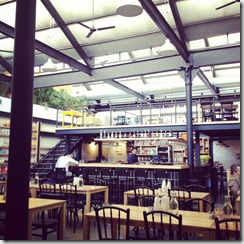 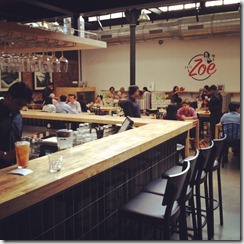 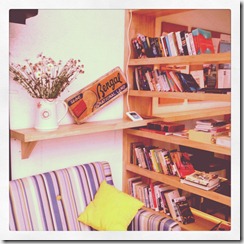 I had heard mixed reviews about Cafe Zoe after it opened.

Recently two of my friends strongly recommended it to me. Both had studied in the same college at Kolkata though they strongly protested when I later pointed out the connection. That has nothing to do with it they said.

I had planned a trip to Cafe Zoe from the moment one of them, Bonnie, told me about the pork belly pasta at Cafe Zoe.

A work meeting at Lower Parel came up and I jumped at the opportunity to check out the place that Bonnie raved about so much. Given her knowledge of food, collection of food books and most importantly the exquisite dishes she makes (hint hint) whenever we visit her and Jit’s place, Bonnie is one lady whose recommendations on food I would follow blindly.

I had a black currant ice tea as I waited nestled happily on a sofa at Cafe Zoe’s. Not too sweet. Quite tangy and refreshing.

Then Bonnie walked in and took charge the way women always do.

You can’t sit on a sofa and have lunch. Let’s head to the table.

Of course we ordered the pork belly pasta. The other order, one that surprised me a bit, were the mini burgers. Seemed a strange thing to order given the lovely range in the menu but Bonnie assured me that this was worth trying out. 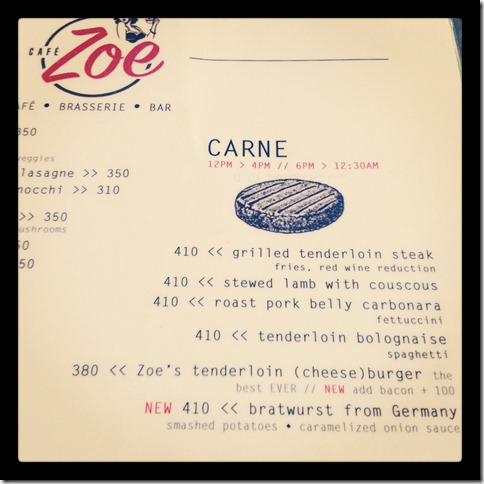 First to arrive was the pork belly fettuccini carbonara.

Slightly different from what I expected. Pork belly conjured visions of chubby bits of pork with fat flapping around them. Instead the pasta was interspersed with shreds of pulled pork belly whose meaty flavours permeated resoundingly through the dish. The carbonara was quite intensely flavoured making each bite memorable. A dish that was full flavoured and full of passion. Didn’t hold anything back. The sort of indulgent decadence which is just what you need on the much maligned day of the week, Monday. Just the sort of the dish to put you in to a zone and prepare you for anything that the week can throw at you. 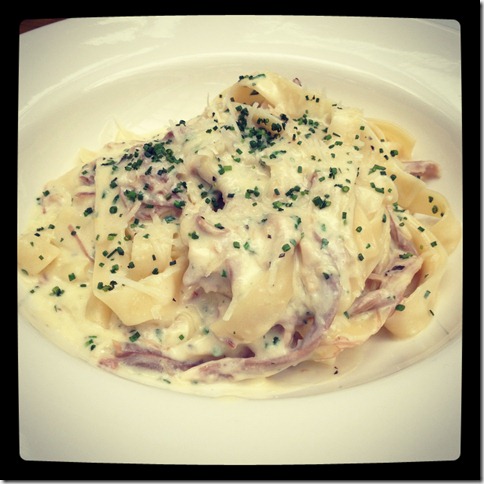 Incidentally Dr Pradeep Rao wrote in when I put up a picture of the carbonara on the Finely Chopped facebook page and said “Couple of my Italian friends think it originated around the second world war to appeal to the taste of the American soldiers who were there. Not a traditional pasta like arrabiata, pesto, amatriciana, ragu (bolognese) etc.”

Sounded like the penne a la vodka which Chef Max told me was invented in Naples after the second word war for the Russian soldiers.

Well, if the stories are true then hats of to the evolution of cuisine and it’s manifestation in a continent far away. The pork belly carbonara at Cafe Zoe with its bewitching balance of flavours touched the spot. This was sheer good food. Etymology could wait.

And then there were the mini burgers. Tiny burgers cut into half and served on a plate. The buns nice and light. Very aware that you wanted to reach the meat as soon as possible and didn’t tax you too much. You cut in through the airy buns and hit the mother lode of meat. The lamb patty primordial…juicy…passionate…done just right…bursting with flavours as the cliche goes…a pleasure to chew on…great meat with just a wee bit of a minty sauce to liven up things. Medium rare with the appropriate touch of pink to woo ones heart.

Suddenly ordering a burger for lunch didn’t seem so strange.

The only, er, fly in the ointment were the odd flies buzzing around who seemed to be fond of the burger too. 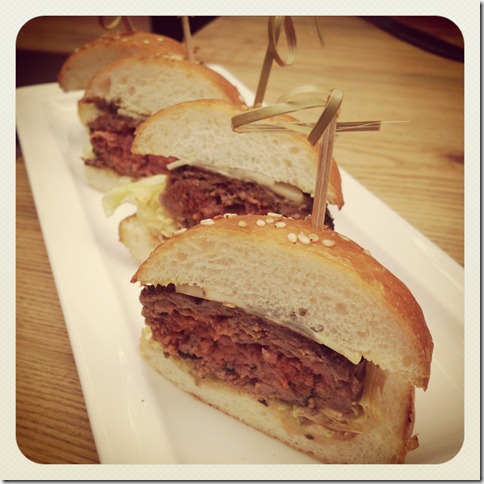 We then went up to the counter to check out the desserts.

We chose a pannacota. I’d never had one before. The pannacota at Cafe Zoe was light, custardish, had few zesty cubes of mango in it and was garnished with sabja (basil seeds) which are put into faloodas at Mumbai. The perfect balm to soothe your soul on a hot Monday afternoon. I took an instant liking to the pannacota here. It didn’t have to ‘grow on you’. 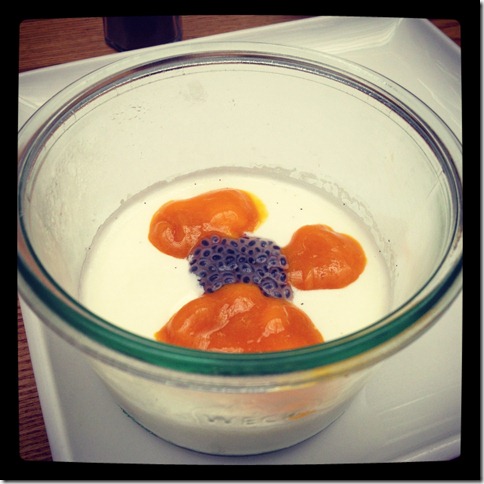 I also chose a hazelnut cupcake to go with my coffee. The cream slightly synthetic said Bonnie and I agree…the cupcake was pleasant, but unlike the pannacota, didn’t really fire up your imagination. 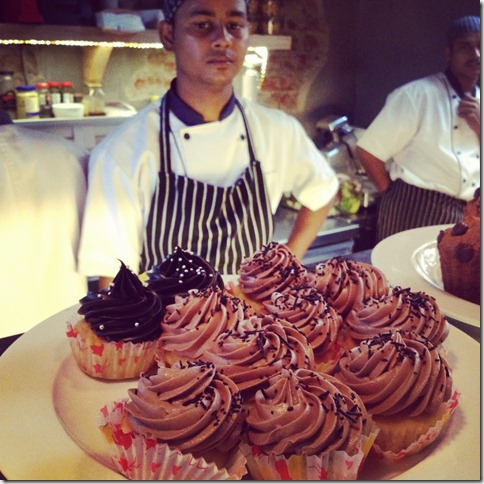 The cappuccino, strong with a clear point of view. Just what one needed to prime one up as one headed back to work in the deepest suburbs of Mumbai.

The only problem with a lunch like this in the beginning of the week is that it makes Tuesday seem like Monday.

The good thing though is that I have some unfinished business at Cafe Zoe. I definitely want to go back there for a leisurely Sunday breakfast. I have a feeling it will be lovely. 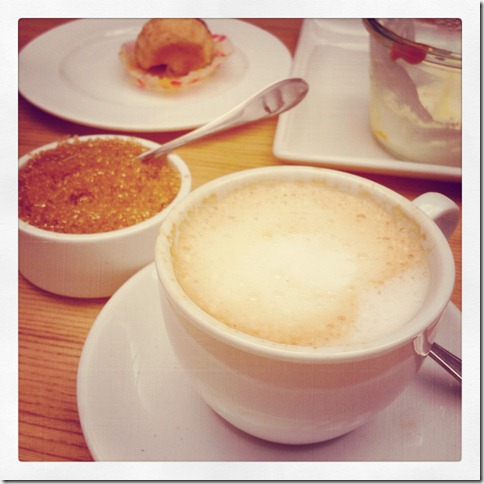 Update: I did go back To Cafe Zoe for breakfast. Even if it was past 1 pm on a Sunday afternoon. The place was quite crowded and the jazz music in the background building creating lively cafe feel.

I started with a nice stiff cappuccino and some pretty warm and pleasant scones which you sliced and slipped in the strawberry crème. Perfect start for a Sunday, I followed this with a luscious egg Benedict with smoked salmon which left that warm fuzzy feeling in the tummy.

For a place that serves a 10 per cent service charge one would have expected them to clear the bit of sugar which I had spilt on the table, give us fresh cutlery for the next course and get our food together and not the pasta (prawn cappeloni which displayed its lovely flavours once it cooled a bit) and eggs separately.

At the next table was film maker Dibakar Banerjee and I did a bit of a fan boy act and chatted up with this very down to earth man…but then his film Shanghai is one of the tautest Hindi films I have seen in a long time. 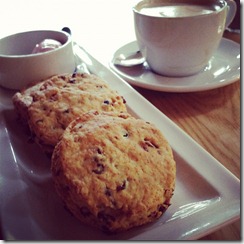 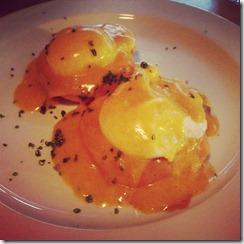 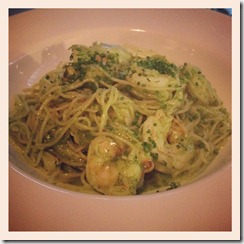 Gaurav said…
been there four times since they opened. the first time was very ordinary and the second was a little better. The third time was just for drinks.

I ended up there once again for a friends birthday dinner and everything, including the cocktails was top notch. So they seem to have found their footing. The ambiance is great too.

By the way Shiro is @ The Bombay Dyeing Mills a little further away. The Todi Mill houses Blue frog, Zinc and Busaba and used to house Zenzi Mills.
6 June 2012 at 16:03

Kalyan Karmakar said…
thanks Gaurav...fixed it...ironically i was at bombay dyeing earlier that day..thought they only had at hrc there
6 June 2012 at 19:33

Gaurav said…
nope, Shiro has always been next door to HRC who have some lunch thing going on nowadays.
8 June 2012 at 12:57

Anonymous said…
Did Dhoble raid Cafe Zoe after reading this review???
Hahahaha I hope he isn't one of your followers!
12 June 2012 at 12:54