on June 24, 2012
l I think that California Pizza Kitchen, or CPK as it’s called, has a bit of an identity problem.

I remember liking the soup and the ice tea the first time I went to the CPK at Mumbai’s Bandra Kurla Complex. Not the excruciatingly sweet pesto pizza though.

Something similar happened when I went to the other CPK at Palladium earlier this week.
We were enthralled by the desserts.

I had a vegetarian pizza when I went to BKC so I decided to be patient till I tried the meat ones.
Tried two this time. Was unimpressed.

The pepperoni pizza had thins slivers of meat which hardly had any flavour. The pepperoni was lost in a film of cheese crust which in itself was quite undistinguished. 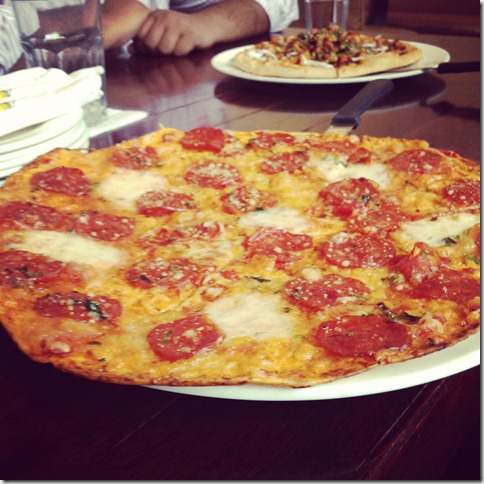 The thin crust was crisp at parts despite my telling the waiter than I didn’t want a crispy base. That I wanted my pizza crust to be supple. The waiter nodded and came back with a half crisp pizza base. So much for the 10 percent service charge thrust on us! I had ordered a pepperoni pizza from Andy’s at Bandra recently and the fact that pizza from there had a stronger meaty flavour and a more pliant thin crust doesn’t say much for an expensive specialist pizza place like CPK.

The other pizza that we ordered, chipotle chicken, was quaint. We asked for a regular crust which seemed a better idea after the crisp thin crust of the pepperoni pizza. The chicken pieces were as tasteless as canned tofu but the black channa chaat topping or ‘beans in salsa’ as the menu described it seemed interesting. It had the familiar touch of the tiffins  that one used to take to school that tugged on the strings of nostalgia. Out of place on a pizza…but then CPK is not really about Italian pizzas is it? 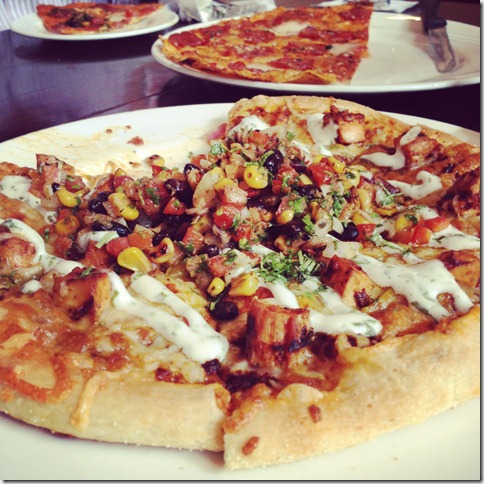 I am told that pizzas were originally peasant food in Italy. A hearty meal of bread topped with fresh and vibrant farm produce. Comfort food. Nourishing food.

Till the Californians made pizzas their own.

We had ordered some veg pizza too. Possibly called sun fire pizza but I am not sure. Slices of eggplant, streaks of mozzarella…promised a lot more than it delivered. The taste once again hazy. 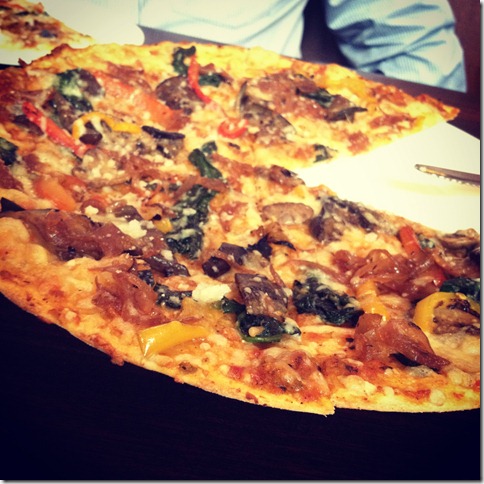 The largely unmemorable pizza ride done I was ready to leave but the 3 kids I was with wanted desserts in the middle of a working Monday afternoon. They called for a tiramisu and a strawberry cheesecake.
I took a bite of the tiramisu after Shriya who called for it cried out happily after the first bite.

I am not a big tiramisu fan but the CPL tiramisu took me back to the one that I had at Fratelli Fresh, Sydney. That I had really liked. It was all boozy and spongy and had coffee written all over. The one at CPK was almost right up there with the tiramisu at Fratelli. As Shubhranshu pointed out when he saw the tiramisu pic on facebook, ‘size does matter’. Yes, one thing that was there about the tiramisu at CPK was that it was mammoth.  Again something in common with the Fratelli Fresh tiramisu and different from the more bambino-like tiramisus available here. The tiramisu at CPK was juicy and was all about unrestrained passion. It had Malena written on every spongy, luscious, boozy, caffeine infused bite. 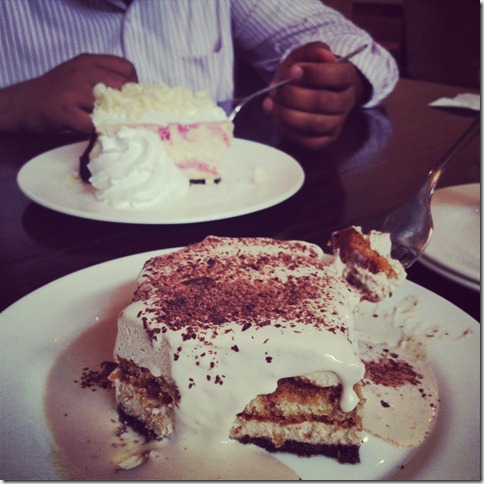 “Mammoth’ described the strawberry cheesecake, which the two boys at the table were demolishing, as well. I shifted my attention to the cheesecake. Sweet, creamy, indulgent…with each bite I realised that I should stop…and then I took another…such was the spell the cheesecake cast on me. If the tiramisu was sinful then strawberry cheesecake was reminiscent of  the proverbial indulgent Italian mamma gathering her brood of kids and cooking happily for them on the movie screens. 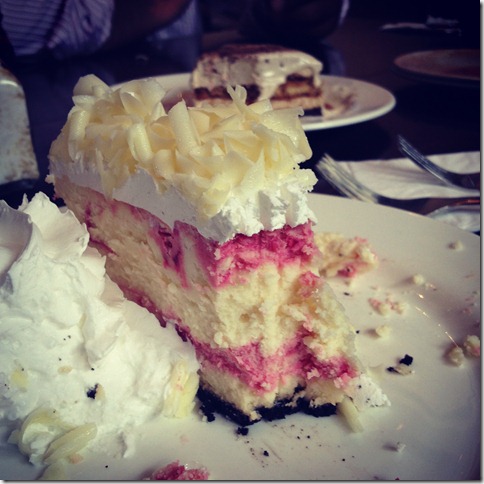 Someone recently asked me on twitter about what one should order at CPK, Palladium.
The desserts of course.

And that was quite an expensive lesson learnt. 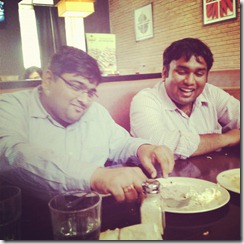 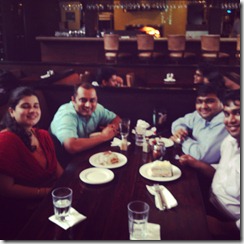 Unknown said…
The CPK’s we have been to in US are decent quality, not authentic and all, but generally they have good fusion pizzas.
You are right, the pizzas in front of you look awful and I can only imagine the taste.
26 June 2012 at 21:28

Lazy Pineapple said…
I felt CPK was way too pricey for the quality of food it served. I have had really good Pizza's at Cafe Mangii in Bandra and now in Pune.
I agree with you on the Dessert's and especially the Tiramisu..they were huge portions and absolutely delectable :)
27 June 2012 at 09:45

Kalyan Karmakar said…
my view on fusion food is the same as that on coktails...i want to experience and appreciate the original first before getting into blends and fusion. And at least when it comes to fusion the food in absolute terms should taste good. Thanks for giving the perspective from the US Ajit
27 June 2012 at 11:39

Unknown said…
Man I hate the new format of this site. It seems like success gone to his head..and he done become a floozy facebook hero
28 June 2012 at 09:05

Sedona Restaurants said…
The pizzas look like they taste absolutely awesome.
2 July 2012 at 12:25

Anonymous said…
I agree about CPK...but then again, I feel this way about all "chain resturants" that try to serve "delicious" ethnic food. Yuck!
13 July 2012 at 18:41

Anonymous said…
The ONLY pizza worth eating at CPK is the barbeque chicken one. Everything else, pizza or otherwise sucks to the core.
9 January 2013 at 23:59