A bad back’s kept me away from the keyboard for a while hence the silence in case you are wondering.

There are about five posts, if not more, that I want to write so perhaps like Plum, in case you have read his hilarious collection of essays, I should get a stenographer.

I read this article on brand blogging in The Times of India today. Talks about how brands are using bloggers as an important avenue to promote themselves. It talks of the phenomenon of bloggers doing reviews for ‘small gifts’.

I guess the lines between mass media and social media are blurring in India. It’s Animal Farm all over again.

Manisha Pandit, food blogger from the US, writes about the FTC regulations there while discussing this on the Finely Chopped Facebook page.

She writes, ‘Bloggers are required by law to disclose their relationship with advertisers. The FTC has published guidelines that bloggers must follow, and that includes social media. There are penalties for not disclosing this information as it misleads the reader into believing that it is an unbiased opinion.

It all started with the reach of mommy bloggers. They started promoting products by writing reviews, without disclosing that they were paid to do it or that the product was free. Win-win, right? Bloggers could monetize their opinions and companies could reduce advertising costs. However, readers of those blogs didn't know they were reading paid endorsements. It's deceptive advertising. Advertising is regulated in the US by the FTC. Isn't there any similar agency in India?”

Well it is a bit of Wild West here. No regulation. No ASCI equivalent.

Cafe Basilico at Bandra belongs to a time before that of social media food experts. The second one to open after the first branch at Colaba. With Pot Pourri and the curiously named Shatranj Napoli consigned to the annals of history, places like the decade old Basilico and Out of The Blue have inherited the mantle of classic continental restaurants at Bandra.

The fact that they seems to be doing well means that they have definitely got something right.

I made a couple of visits to Basilico recently which showed what. 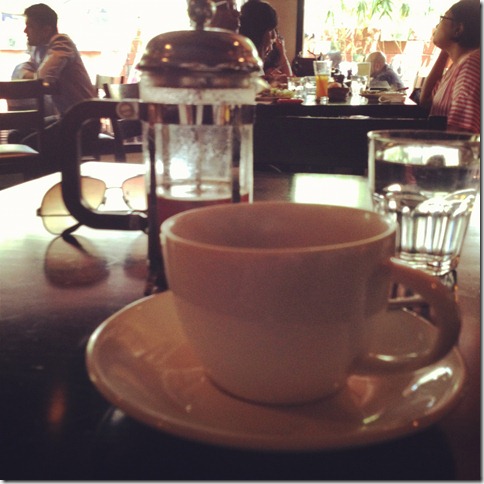 Once was for breakfast when there was a bandh at Mumbai recently. Yes, biryani and rolls are not the only thing we Calcuttans have enlightened Mumbai to.

Indigo Deli (whose thoughtful half-closed facade the BMC has broken on license issues. So what if the honking, pollution & dust makes a fresco seating torturous in Bandra) was shut. As was Candies!

So Basilico was a compromise. A happy one as it turned out.

The relaxed, instagram infused cafe feel, and a plate of luscious Egg Benedict which I got once I convinced the waiter to give the plate to me, and some pretty nice scrambles eggs, juice and French Press coffee and one was pretty close to mid-week breakfast perfection. 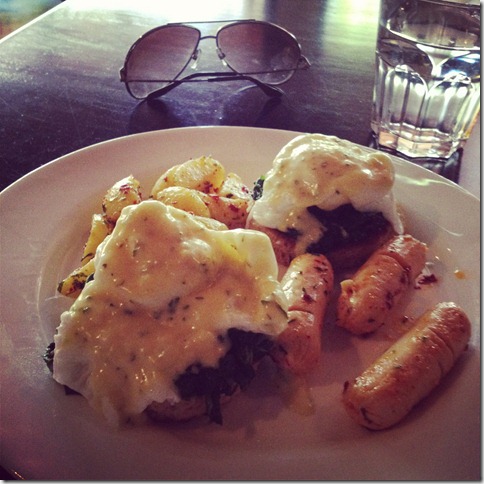 And then recently for dinner on a rainy night after an art film moment in a focus group where I was surrounded by food with ‘nor a bite to eat’. The young waiters at Salam Bombay anyone?

The first thing I called for at Basilico that night, inspired by the stuff in the group, was garlic bread with mozzarella. This frankly was unimpressive with the plasticky layer of cheese. The bread was good though. 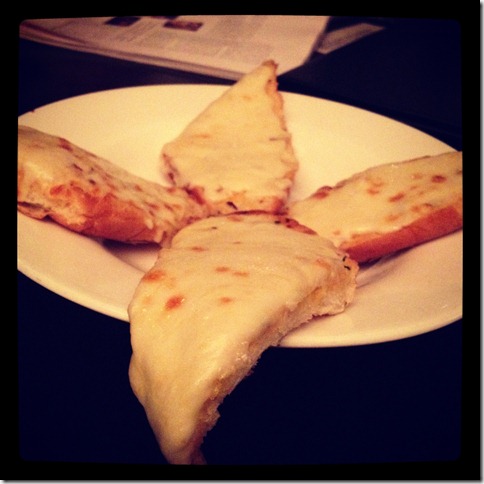 The mains were mind blowing though.

K had a grilled king prawn with lemon sage cream. The flavours intense, the sort that light up a wet stormy evening. The prawns grilled to perfection. Lively and not charred to death. 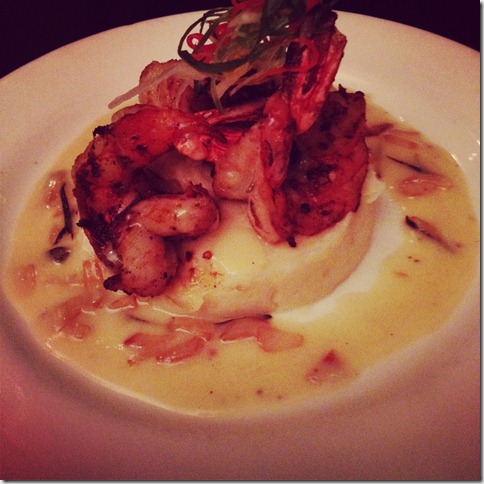 I had a pan fried T Bone steak. Medium rare. I often find steaks too much to finish. No such problems with the one at Basilico. It was juicier than the Mumbai Monsoon at its fiercest with a lovely inherent headiness of wine to make it special. 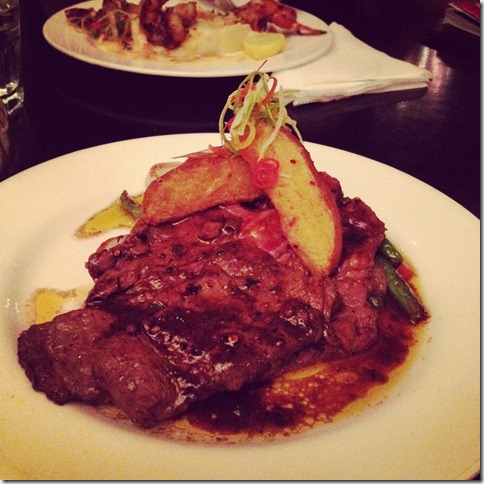 Both dishes the sort that make you want to jump into the screen when you watch Food Safari on Fox Network, Masterchef Australia or Nigella’s Kitchen.

The cheesecake was warmed and served which was a bit strange but the consistency and sweetness of the Philly cheesecake reminded me of nights when we would cross the road from home for desserts at Basilico. 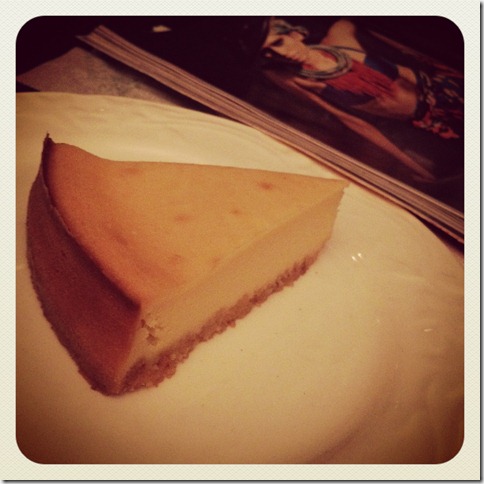 Cafe Basilico Bandra is one classic act which doesn’t really need to hold a blogger’s dinner if you ask me.

Pity, given it is so close.

1. On wine pairing with Indian food in the Mid day which coincidentally was followed by the a dinner on the same at Rahul Akerkar’s Neel. Wine pairing is something I plan to write about when I am not bent double. 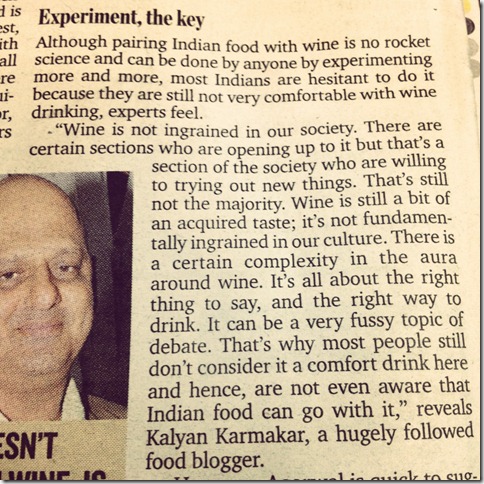 2. A mention in Elle which I was later told is not a fashion mag but a comprehensive magazine for women. Well, all I can say is that I am happy to feature in the same issue as Don Draper. The pic is from my visit to Guylian, Sydney 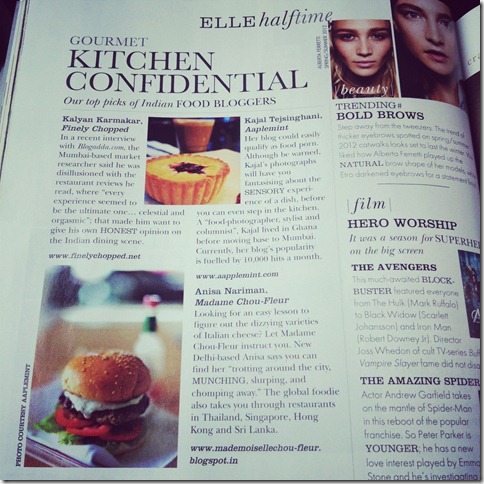 Unknown said…
Thanks for the mention! I appreciate the regulations in the US because, even if the opinion is that of the blogger, I know that it's a paid review. There are many bloggers who will not review a product if they are not happy with it. Over time, one knows whose opinion to trust, regardless of whether it is a sponsored post or not. I must say I'm surprised there isn't more discussion on this topic, both in the media as well as blogs (Indian).

Kalyan Karmakar said…
@June, you should

@Manisha...i actually quoted the FTC example in a digital presentation at work recently and they found the perspective very interesting. As a blogger this is something that interests me a lot specially as I begun blogging put off by advertorial-like stuff on mass media