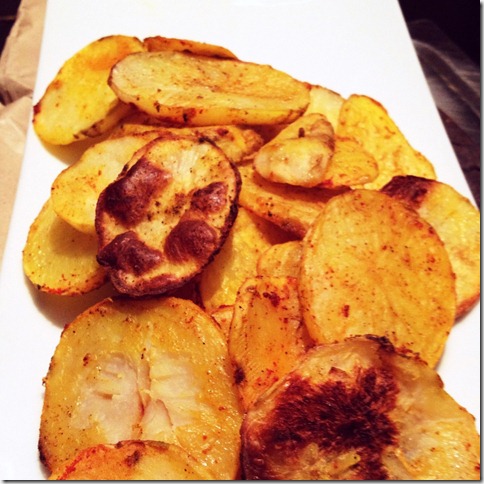 The other day I came back from work and was faced with a rather boring dinner.

It was a dinner of my choosing but then I thought I could be a bit less strict on myself.

I decided to bake some potatoes to go with dinner. I peeled potatoes and was about to cube them and sprinkle some salt and pepper when I suddenly remembered something from my growing up days.

The alu chips that Didu, my maternal grandmother, used to make when we stayed at my grandparents’ place for a while.

She would slice potatoes, smear them with masalas and deep fry them and you had crunchy home made potato chips to go with dinner.

That gave me an idea on what I could do that night.

Then I took the tray out, carefully turned each potato slice over and put the tray in for another 8 minutes at 150 C.

The chips were done. I opened the oven and took out the tray and let it be in the open for about 5 minutes so that the potatoes became firm and slightly crisp. 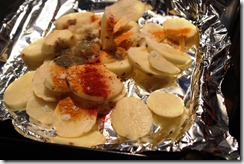 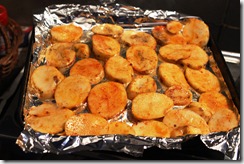 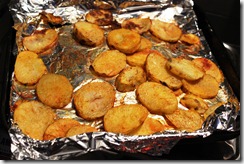 And there, I had made Didu’s alu chips in the oven.
The end effect…crisp on the outside and lovingly soft and starchy and grandmomish inside with a distinct taste of Didu’s cooking even if I say so many many years after I had last had these chips.

Of course the thinner the slices of potatoes the crisper it will be. Someone saw the pic on twitter and said her granny used to make this too. She also pointed out that our grannies used to soak the sliced potatoes in salt and turmeric water for a while for the potatoes to be crisper.

You could try that.

Talking of Didu, did you see the 86 year old Queen of England come to the opening ceremony at the Olympics with James Bond?

Well Didu is 84 now and I am sure she would look quite dapper walking down with Daniel Craig too. 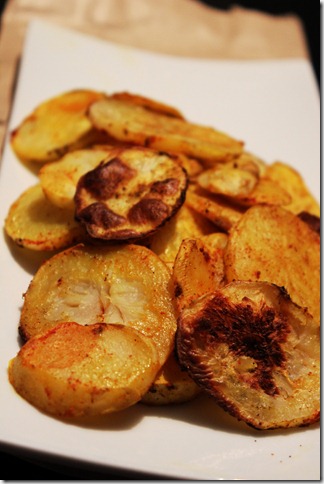 Caveat: I have no idea how Didu used to actually make them so I am guessing. Will call and ask her.

Vidya Vaidyanathan said…
Whoever said eat healthy has no clue what they are missing out on
2 August 2012 at 13:14

SC said…
The chips look wonderful. I am definitely making these each and every time I only have bhaat-dal for dinner. Your Didu is simply awesome :) Please pass on my thanks to her.

ps. Having seen pictures of your Didu on your blog, I agree she would have looked great walking down with Daniel Craig too :D
2 August 2012 at 22:31