Much ado about alu posto 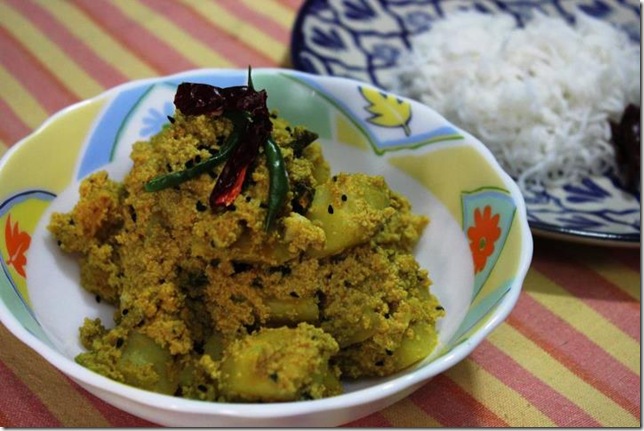 This post first appeared on The Chopping Board, my space on The Times Of India blogs

Hot Potato… The search for authenticity in recipes

The other day I sat down for lunch at Bijoli Grill at Mumbai and heard folks order an ‘alu posto’ at the next table.

I called the waiter as he went past me and asked if the cooks put holud (turmeric) in their alu posto.

The waiter went to the kitchen, checked, came back, smiled and told me ‘hya, ektu dai’ (Yes, a bit).

Now, asking your waiter about what the folks at the next table have ordered is not part of the necessary etiquette for a Bengali meal. There was a reason behind my question.

A few days back I had shared my alu posto recipe on facebook and mentioned that I had used turmeric when I cooked it this time.

This led to some pretty strong Bong-rage …the common refrain was ‘How could you use holud in alu posto? What were you smoking?’

The point of view being that alu posto should be cooked ideally just with posto (crushed poppy seeds) with very little seasoning…as virginal as possible.

I quickly retracted my stand and made the following statement on my facebook blog page:

“Since some buses have been burnt because I have used turmeric in alu posto I must stress once again that most of my recipes are built on instinct, inspired by what I see around me and my taste preferences. They are NOT text book versions of dishes.
To clarify I use cumin or occasionally even onions in alu posto because I like the flavours of both. I didn't use turmeric earlier but started doing so after seeing yellow alu postos served in Mumbai Bengali restaurants.
No one has taught me this version, it is my version of alu posto and not the quintessential alu posto and it works for me.
So follow the recipe at your own risk.”

That was the end of the story I thought. Except comments then began to pour in.

“Even I add a pinch of holud…looks better”, “I add turmeric too”, “I vote for holud” and so on.

The discussion continued, some said they didn’t add turmeric but they added paanch phoron (Bengali five spice), one said she added neither but hesitatingly admitted that she added garlic (shocked silence) to the posto, most said ‘skip the cumin and onion’, the verdict on kalo jeere (Nigella seeds) was hung …it was much ado about posto after all.

Which set me thinking… can there ever be an authentic Bengali recipe? The ultimate way of cooking things? The Netaji, Tagore, Ray and Suchitra Sen approved way?

Kurush, a Parsi married to a Bengali, a caterer and an archeologist, once told me that though he can make it (‘eating is believing,’ Kurush), he will never prepare kosha mangsho for a Bengali client.

Well this is not just a Bengali problem.

I have come across Parsi dhansaks which are of different hues of brown depending on whose house or which restaurant you are having it at. Dosas that range from the razor sharp plasticky Frisbees of Mumbai’s Shetty restaurants to soft cuddly security blanket-like dosas that I have had cooked by folks’ moms. As someone pointed out recently the Gujarati, Sindhi and Maharashtrian kaadis are different. And the only thing that I remember from Pankaj Mishra’s ‘Butter Chicken in Ludhiana’, a book I read in high school, is the claim that no two butter chickens are the same.

We don’t really have a formal culinary tradition in India do we?

Like the Vedas, the Indian cooking tradition is more oral than literary…handed down across generations…adapted by each new recipient. There is a certain laissez fare to our kitchens with measures being approximate, cooking times amorphous, methods as well.

It is probably now with the explosion of cooking content in media, and blogs where folks are documenting and sharing recipes, that one’s getting some method to the madness. The danger of course is that the gay abandon that characterizes the Indian cooking idiom could turn monochromatic and dull.

But that’s a long long way ahead. Till then one can not but feel for folks who set up Indian restaurants and have to feed folks like us with our calipers of food memories and point of view on how things should be cooked.

Or is culinary absolutism only a Bengali thing?

Maybe I will just skip the holud next time I make alu posto.

Lazy Pineapple said…
You had a tough time there with so many different opinions about a single dish. Indians truly are passionate about their food.

I have had Aloo Posto without the turmeric. I guess even with turmeric it would taste nice :)

Tampha said…
Hear hear for the intrepid foodie :) I was actually searching for aloo posto recipe online when i chanced upon your blog. Thoroughly enjoyed reading it & completely relate to the whole 'version' discussion :-D
20 December 2012 at 18:09