It’s so difficult to get a nice creamy soup at Bandra these days.

The cream of chicken/ tomato/ asparagus soup of yore which you would get at the Gaylords, Mocambos and Kwalitys  of the world. The sort you would otherwise get in buffets which feature butter chicken, dal makhni, veg augratin, jalfrezi, Goan fish curry, jalebi, ice cream and gulab jamun.

I mean French onion soup, gazpacho, mom’s broths with tomato juice, barley & whole grains are good but not when you have a sore of the throat and you need a bit of the creamy milk of human kindness to mollycoddle you.

Thankfully got some hearty soup last evening at the Temperance India cafe at Bandra.

We went to Dr Miranda for my sore throat and sudden bout of fever (gone this morning in case my mom is reading this). Dr M’s quaint bungalow and her cheery demeanour is a big part of her treatment and always buoys one up.

I suddenly remembered that Temperance India, which is next door next to Rizvi Catering College beside St Anne’s Church and behind Bagel Shop, had some nice creamy soups when I went there earlier.

My first visit to Temperance was for a tasting at the new cafe. We later conducted a weekend workshop there for a client at work. Perfect place for a workshop. It’s at Bandra next to home so I can get out of bed and tumble in without waking up early.

Very different from the average closed hotel basement hall where one does these workshops. Big windows which looked on to trees and a terrace garden…it even drizzled a bit on cue when we did the workshops. The participants seemed energised all through and the open surroundings kept the ideas and creativity flowing. Highly recommended as a workshop venue. And I have seen many in my time and all over the world.

Temperance India is an interesting concept. A huge bungalow in the middle of Bandra on which two cousins have let their dreams go wild. They plan to make it a sort of a cultural hub from what I understand. There are fitness classes – yoga, kick boxing…dancing as well. They have also held sessions on swirling dervishes and yesterday I saw they also had book club, movie club and a whole lot of other stuff written on the walls of this 3 or 4 storied property which has a lovely space of space and serenity bang in the middle of manic Mumbai

They also have a restaurant and that’s where we headed last evening.

Yet, there was a bit of magic in the air with candlesticks on the table (difficult to read the menus though), big windows, high backed chairs with a touch of velvet, ornate lamps, windows looking onto trees outside and little fairy lights twinkling through the dark.

Took us back to our dinners at The Cave Hotel at Cappadocia and The Veranda in the Forest at Matheran.

Yes they had creamy soups that evening at Temperance.

Cream of broccoli and cream of chicken.

I went for the latter.

No pics as I wasn’t planning to blog but the cream of chicken soup at Temperance India was just what Dr Miranda would have approved of. Bursting with flavours cheering your fever dulled palate and urging your tired senses to come out to play. Warm, nourishing, soothing…patiently coaxing your throat…don’t worry if you can’t swallow the food, I’ll wait with you, see you through, it will all be good…touches of Florence Nightingale and yet it wasn’t a sick man’s broth…the firm and juicy bites of chicken would make the sternest of epicures smile. As would the beautiful hearty texture of the soup.

We also had a double chicken Panini. Interesting flavours with a sharp base of pesto and odd bursts of very good cheese which, as K pointed out, embellished but didn’t drown all other tastes. She quite liked it and the fries which she said were perfect - ‘crisp outside and soft inside’. With my sore throat I showed extreme discipline and skipped the fries even as K kept praising them. Though I can tell you with full authority that the coleslaw was pretty good and fresh with the just the little bit of sweetness required. Frankly I could have done with a bit more moisture in the sandwich though K just loved it as it were.

From my earlier visits there I remember particularly liking the roast chicken, which was surprisingly juicy and delectable for a chicken breast, and the mixed bean (yes) salad. Was happy to know that they open by 11 am so I think we will head there once for the hearty omelette (4 egg whites & olives) or waffles with cappuccino breakfast.

When I went to Temperance last evening I remembered I had 3 vouchers for yoga, kickboxing or dance classes from the tasting.

Perhaps I should do all three and become Agent Vinod.

Pics from the tasting and the workshop. I think I spotted a pic of the soup too: 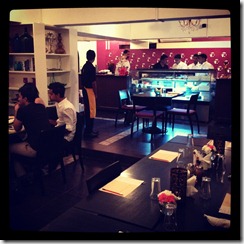 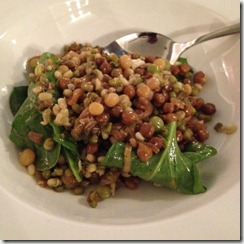 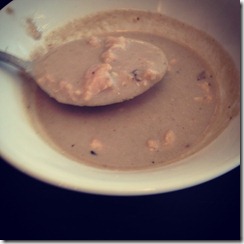 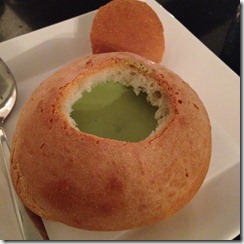 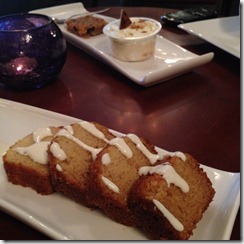 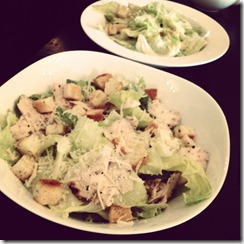 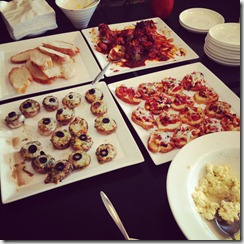 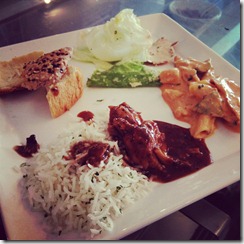 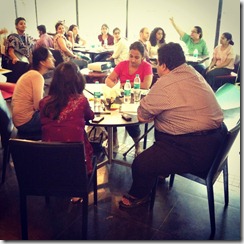 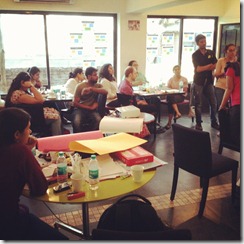 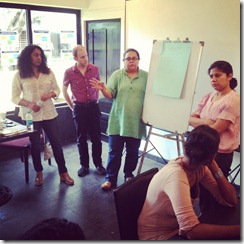 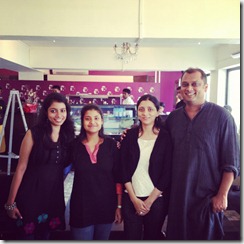 Well it was rainy and grey this morning so we did go to Temperance for breakfast.

Realised a couple of things which you have to keep in mind if you go there.

First, you should be fine with a place which is completely empty.

Which honestly worked for us because with the greens outside and sense of space it did seem as if we were in the dining hall of a resort out of town. Very Veranda in the Forest or Cave Hotel as I had said earlier. So a 2 minute drive or a ten minute walk, we chose the former, to feel that one was one out of Mumbai.

The other thing is that you have to be willing to give a very wide allowance to things not being right or more importantly shouldn’t be too hungry and shouldn’t have gone there just to eat.

I remember the owners of Temperance telling me that they are making a slow start in terms of publicity before they get their act right and the fact that the cafe is part of the overall offer and not meant to be standalone restaurant.

This morning we saw why.

We started off by ordering a healthy hearty omelette made with 4 egg whites, spinach, olives, capsicum and in olive oil and served with multigrain bread according to the menu. 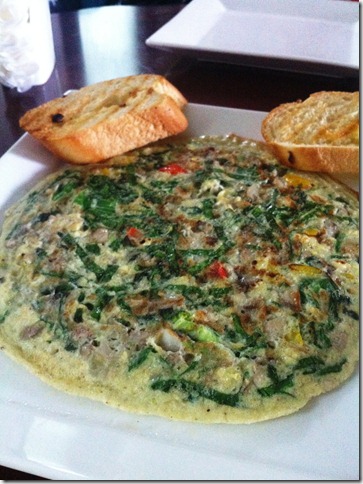 The omelette didn’t take too long.

The omelette was nice and tasted like something one would make it home. Slightly under-seasoned but that was easily fixed.

The high point was the bread. It tasted so wickedly sensuous…golden with butter, lovely tasted garlic flavoured hues, soft, white…very obviously not multigrain and definitely didn’t belong to the healthy breakfast section of the menu that we had ordered from.

We also wanted waffles and the smiling waiter promised to get it for us with our cappuccinos.

Then another waiter came back.

“Would you like it with chocolate, Nutella, butter or maple syrup…tastes very good Nutella”.

I first said yes to Nutella then sobered down and said maple and butter.

Soon after the omelette the aromas of the waffle began wafting through the restaurant and my smile of anticipation grew wider.

Then the waiter got the cappuccinos which were frothy and competent.

A bit later he came up to us.

“The waffles have got burnt. A fresh one will take twenty minutes. Do you want to cancel your order?”

Well we were in a nice relaxed holiday mood and you would expect this sort of thing in a small resort far away from home. So even though we were in a cafe in the middle of Bandra I soaked in the same spirit, smiled, and asked for another waffle.

“Sir, the chef made 3 attempts. The waffles not coming out right. The machine’s not working. Sorry we can’t make it today”

Sort of explains why the place is empty I guess.

See the pictures below and you will realise why I hope they fix things soon. 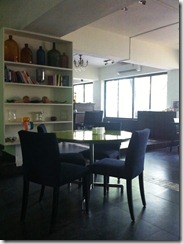 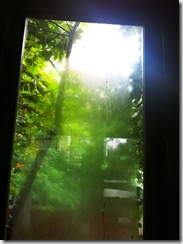 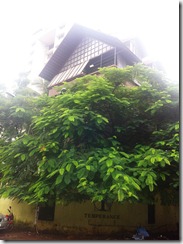 Culinary Muse said…
Kalyan, i love soups and the one we had a Temperance during the workshop was delicious! Think I need to make my next trip :)
20 August 2012 at 12:46

Kalyan Karmakar said…
well the soup was really good Sunayan and it was great to have you at the workshop
20 August 2012 at 14:51