This is the story of a genius cake which was conceived through a twitter brief.

Not just any cake. A Macaron cake!

It all started at about 11 in the morning when inspiration struck me and I tweeted Pooja Dhingra of le 15 Patisserie. 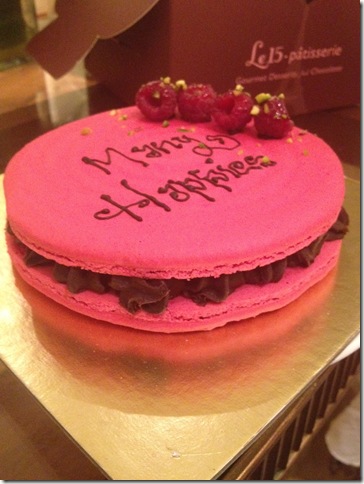 We then moved on to DM.

Now it is not good form to make private messages public but I think that we will make an exception here.

Wife's bd Tom. Wondered if one cd order a small macaron cake which I can pick at Phoenix this eve or too little time (Le 15 patisserie has an outlet at Palladium at Phoenix Mills Mumbai)

hmmm what time would you like it? If I start making it right now it could be ready by 6-7

6 at Phoenix? She has discovered a love for macarons after Cannes so anything small around that. A dark choc no alcohol cake? Not a party just 2 of us so small

The cake was ready when I went to Palladium at 6 pm. I did a double take when I saw it. Fitted the brief in a way I could not even imagine. 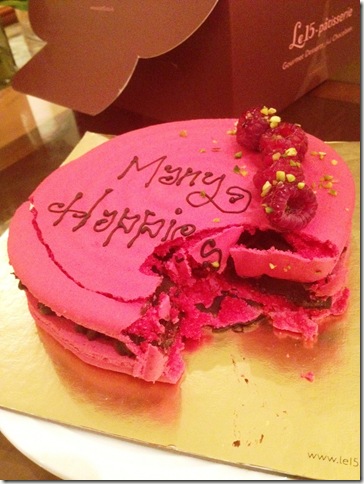 Well here’s the feedback that I tweeted to Pooja later:

Kalyan Karmakar ‏@Finelychopped : @poojadhingraa 'I have no words to describe how happy I am after this cake' in between 'oh man' 'oho' (for the cake that is)

Chocoholic said…
macarons are good, but a macaron cake, just great! what an awesome idea!

Pinku said…
that looks so very tempting... my eldest daughter loves cakes, has a big sweet tooth and loves the colour pink. This seems so so right for her.

Adam Clak said…
Most you don't learn What is needed of any invention with order for The idea to be able to have a patent. Here can be a effortless explanation connected with what a good recent invention Requirements without your confusing legal lingo.
20 August 2014 at 17:10