Banu bunked for the last couple of days.

The house was in a mess and the kitchen too. Cooking was out of the questions. Our options, order in or go out to eat.

And then the first set of my cooking videos came up on the India Food Network on YouTube. A bit of a celebration seemed in order. So going out then. The usual choice of Moshe’s? But nothing to drink there. Salt Water Cafe? But I didn’t want to drive. And then suddenly, why not Poco Loco down the road at Pali Naka. The new Spanish restaurant.

Walked down and went in. The place seemed larger and brighter than what one expected. This is just beside Toto’s. Place was reasonably full with a table of boisterous expats giving it the Spanish tavern feel.

We got a couple of bar stools with no back rest. Sat there tentatively as my back was down again. Turned out be fairly comfy and cosy. I looked up at the soft board in front.

There it was. A newspaper article from The Mid Day with a quote of mine on Spanish cuisine and a pic too.

A friend and journalist had told me about going to Poco Loco and coming across the article. One knew it was there and it was at the back of mind when I decided on the place.

But what were the chances of getting a chair just in front of the pic?!

I tried a green apple and white wine sangria and later a red rosso one. Refreshing, with a decent kick later.

No beers here. Only wine and wine cocktails though apparently the Spanish are quite into beer as well.

My only yardstick on Spanish food was the dinner I had at Arola at Juhu a few weeks back.The focus there was on the simplicity of ingredients. I was interested to see how it turned out here. The newspaper article did say that the Chef at Poco Loco is a local Bengali who had developed the menu through research. Not sure if he had been to Spain and the food in the reviews was described as an ‘Indian take on Spain’ at Poco Loco.

We started with smoked salmon – layers of smoked salmon and caper. Delicious and very simple with the dish consisting just of layers of salmons and some capers to break the taste. This was indeed about natural produce.

They had probably just sliced the smoked salmon and served it. Which, for us, is never a problem given our fondness for smoked salmon. 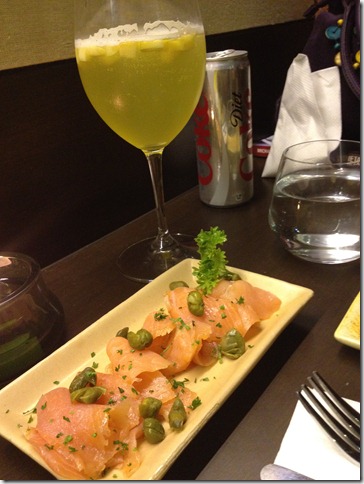 Next up were the chorizo pimente. Grilled slices of sharp chorizo and regular franks served with bell papers. A very very intensely flavoured dish which made us very happy about our choice of place. It was the sort of dish that lit up the surroundings with its riot of colours and the taste lived up to the expectations it aroused. 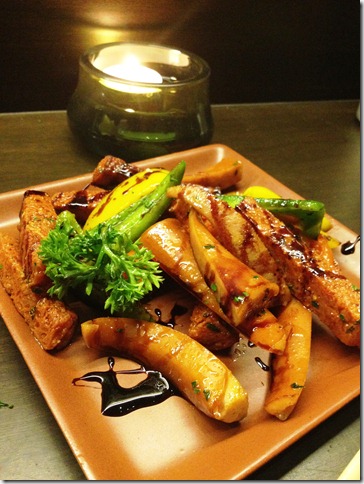 The gambas ajlio olio was a bit disappointing. Prawns grilled with olive oil and chopped garlic. The prawns were a tad over cooked but when combined with the oil and garlic tasted pretty decent but not awe inspiring like the prawns at Aorola. 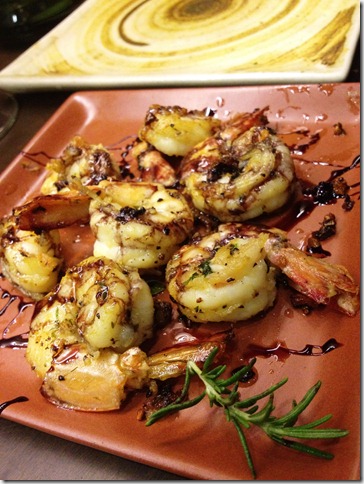 For our mains, one more tapas. A delectably soft lamb with braised onions. 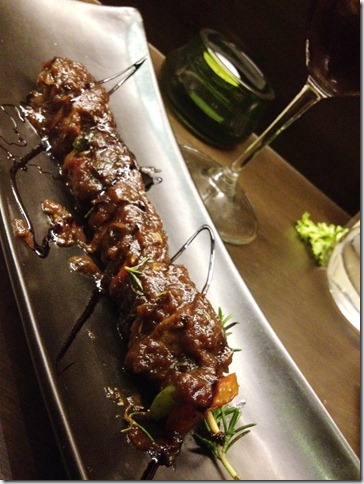 And a seafood paella. This was too much for one person but the prawns, clams and squids combined pretty well with the Arborio rice which was brought alive by a sweet touch of saffron. the paella had a lot of heat as the dish was filled with red chilli flakes making me wonder how ‘Spanish’ the dish was but in absolute terms I quite enjoyed it. 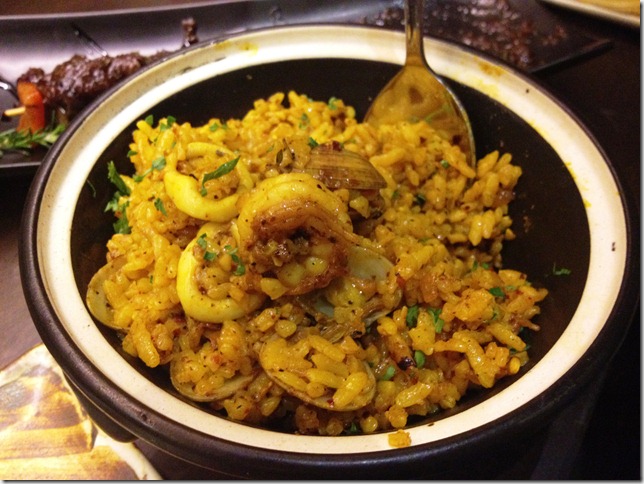 All in all the evening at Poco Loco was very nice, even though the waiters would occasionally hustle one (can I take your plate, would you like to place an order etc).

A nice relaxed place to hang out at and I will try to go there once again while the photo is till up ;) 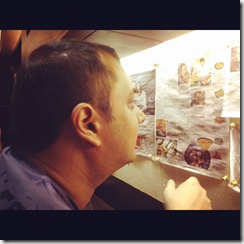 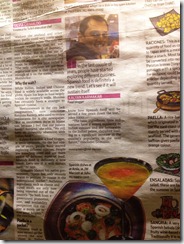 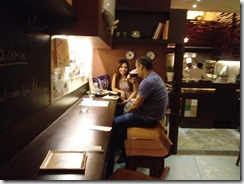 vandana rajesh said…
Nicewrite up as usual.Poco Loco definitely looks like an interesting place to be and so say all these delicious food pics. Congrats on the videos..watched the Kosha Mangsho video and this is on my to try list soon..will get back with the feedback on it.

I mean sitting across a newspaper clip with ur own face on it...

the food looks good..but those chairs seem hardly the place where u would want to have a laid back time.
19 September 2012 at 13:23

Kalyan Karmakar said…
thank you so much for your feedback Vandana. Over the moon right now :)
19 September 2012 at 18:31