on September 04, 2012
Just heard about the Metro bridge that has collapsed at Chakala. This is terrible. Lives lost. People trapped. Hope the rescue operations are successful and those responsible are brought to book.

In my last post I wrote about the romance of the Mumbai rains and the joys of driving thought it.

The romance turned sour last evening as our drive back from Kandivli to Bandra, via a stop at the end at Hyatt and then Arsalan (guys I love the welcome but you have to stop fobbing me off with chicken breasts when I ask for legs), took us four and a half hour down the highway thanks to the rains. I was in the car with some folks from work and while the four and a half hour trip was arduous we were still a lot luckier than many who were struggling on the roads.

The horror stories from last evening are endless.

Such is the story of Mumbai and coming home to a bit of Arsalan and Jameson restoration last night did help.
I got to try out a bit more of Faaso’s during the day yesterday. Something I had promised the guys at Faaso’s that I would at some point.

Faaso’s is a Pune based wrap company which is now at Mumbai too. Gets spoken about quite a bit on social media and lots of folks order from them. I tried ordering once from office and my order never turned up. To be honest I was bit sceptical given the distance but they said they would deliver. They didn’t and later apologized on twitter offering to send me something free the next time I ordered.

Then a Faaso’s outlet opened at Pali Naka at Bandra and I picked up an egg roll/ wrap from there one evening. The paratha in the wrap was too thin and lacked texture, the egg hadn’t cooked properly, was moist and had an unpleasant mouth feel.

It didn’t work for me and I tweeted that. The folks from Faaso’s tweeted back saying that I should try it again. They said they wanted my perspective as a Calcuttan on the wraps. They said I must come and try the mutton wrap on the house.

With Hangla around to satisfy my mutton roll cravings I didn’t get to take Faaso’s on their offer.

Did get a chance yesterday to try them as I was at Kandivli Thakur Village on work. I was given the option of  Subway for lunch when I remembered seeing a Faaso’s outlet as we drove in through the blinding rain. I find Subs too messy. The big bites required for a sub put me off and the taste is too all over the place for me.
So we called from Faaso’s. Some paneer stuff for the vegetarian and a prawn and a mutton wrap for me along with some cold drinks and some weird thing which came which I thought was a raita but seemed like a sabudana kheer.

This time the order reached us fairly quickly despite the rain.

I started with the prawn tikka roll first.

I took a bite and flinched.

The paratha once again was very thin and plasticky even though made with flour (maida). This straight away kills it for a Calcuttan as the parathas in  our rolls are a lot heartier and full bodied. The Calcutta rolls are sautéed in oil on a flat wok and are a lot more robust. There is a certain voluptuousness to the Calcutta paratha which was missing in the very Plain Jane Faasos one. The latter was cloyee and nagging and lacked the free-spiritedness of the Cal parathas. Even the parathas at places like Nizam at Calcutta, which are thinner than those in the other roll shops there, have character which was missing in the Faaso’s one.

The paratha in the Faasos wrap was a pale imitation of what a good roll paratha could be. 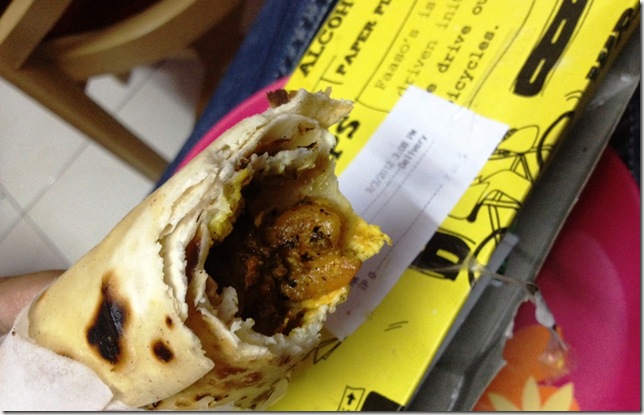 The prawn tikka had the the texture of hardened rubber but the spice was interesting and this time the egg was cooked properly.

The other roll was the mutton boti one which they had suggested at Faaso’s as an alternate to mutton rolls.
Well, apart from the cardboard paratha, which is not a Calcutta mutton roll trait, the mutton in the Faaso’s wrap was curried and not the kaathi kebabs sauteed on a wok which is the Calcutta version. The mutton in the Faaso’s wrap admittedly was  quite tender and reminiscent of mutton from a nice kosha (slow cooked mutton) mangsho.

The only thing is you don’t tell a Bengali to try the mutton boti wrap as a substitute to a mutton roll! 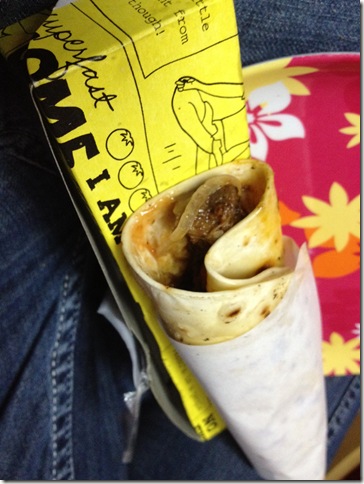 The late lunch of the two rolls served me well when I was traffacked on the way back but if I look for an alternate to rolls at Mumbai then I would either go for a shwarma, which is completely different, or an egg Frankie which has strains of a Calcutta egg roll.

If I was to try a Faasos wrap again it would not be as a roll substitute.

My Experiments with Food said…
I have ordered from Faasos (Pune) on atleast 5 different occasions, and unfortunately have always been disappointed. On 2 occassions, my stomach was impacted (my husband has had the same experience). So no Faasos for us now. But I do know people who like it and are regular customers.
5 September 2012 at 00:10

Pinku said…
I am wondering what Faaso will offer to do for you now ;)

some places are like that, while others keep praising them it never does quite work for you.
5 September 2012 at 10:49

Rhea Mitra Dalal said…
OMG! You said Frankie!!
I haven't tried Faaso's yet but K orders from them off and on at Kalina. I guess they are quite pedestrian because he's never raved about them...
7 September 2012 at 19:28

intelshwets said…
It is surprising. I used to eat at Faasos when I was in Pune (but this was 5 years ago) and used to absolutely love them. Beyond comparison. They has simple food - nutritious, cheap, hip.
But again, this was 5 years ago. Maybe 6.
14 September 2012 at 02:48