Italy on the house … Botticino, The Trident, BKC with Chef Davide Rebeccato

Suprio Guha Thakurta ‏@eastbengal :Mother Nature is the true artist and the more u do to food the more u take away from it - Marco Pierre @Finelychopped (from twitter) 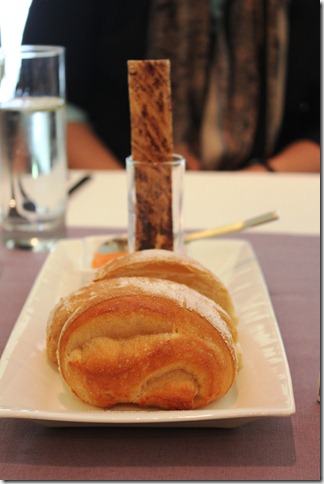 Recently I wrote about my Spanish dinner at Arola and about being enthralled by the simplicity of cooking and subtlety of flavours there.

A few days later, yes I can hear a few of you say ‘you sold out’, I had a similar experience over a meal hosted by another five star cooked by another European chef.

Once again it was all about delicacy and finesse and this time artistry too given that these were plated dishes.

This was at Botticino, the Italian restaurant in the newly opened Trident in the Bandra Kurla Complex. A hotel that has a semi-circular facade and open space in front that reminded me of the hotels in Singapore or Thailand.

The lunch was a wine pairing lunch and we had Giorgia Nanut, the sommelier, talking us through the whites and the red. Which, as you know, unfortunately is all you will get to know about here. Oh yes, all of us instinctively liked the red the most and seemed to be nice and warm and full bodied to me. The sparkling at the start had people quite excited too. 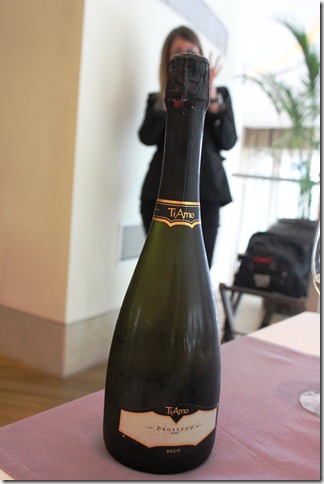 The lunch was put together by chef Davide Rebeccato, who had come over from Travertino in the Oberoi New Delhi, to design a special menu for Botticino.

There were five or six of us at the lunch. An interesting mix of folks.

A trend forecaster, a food freelance writer, a couple of journalists from NYC and a wine and lifestyle writer from Mumbai. The conversation was interesting and reflected different perspectives and experiences with chef Davide coming out in between courses to help us select from the menu and talk us through the dishes, get our feedback and take our questions.

Chef Davide spoke of the subtlety of the Italian cooking regardless of whether it comes from the North or the South. While he does spice or sauce up things if guests request, he said that the food here is otherwise is similar to what one would get in Italy. While the fish and vegetable are local, the meats and cheeses are imported.

The menu was quite a visual and gastronomic treat.

Take the amuse bouche for example. Half a grape covered with a nut encrusted goat cheese shell. Just close your eyes and imagine the taste and texture explosion of the tart of grapes then the sharp saltiness of the cheese and then the noble crunch of nuts. How elegant is that? It had the same fascination for me that my beloved kheer and posto enrobed roshogolla, Bengali sweet of kheer kodom, has for many.

It takes a deep love for food to dream up of such lovely combinations. 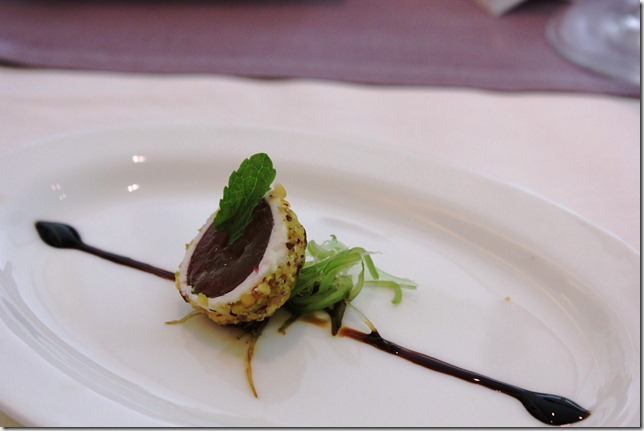 We had some crusty hearty ciabata to chew on in between courses and apart from olive oil and balsamic on the side, this came with a pumpkin dip which had some pretty deep flavours of bell pepper swirling through it

We had to choose our appetisers and since I was still groggy I went for something brunchish. 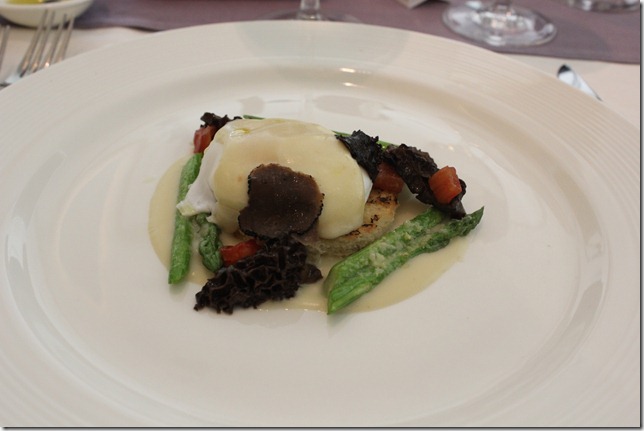 The sheer creaminess of the poached egg which burst on to the home-style toasted bread brought back memories of an age before mechanical toasters. Of mornings of hand toasted bread and half boiled eggs in egg cups. Yes, this was sheer chubby growing up days pyjama food served in a very aristocratic way that pleased the eyes.

For my mains I went for what they call ‘protein’ these days.

Slow cooked for over 6 hours at about 70 degrees or so. A dish which was an example of great teamwork on the plate.

Yes, when the meat is good, the experience is quite carnal. 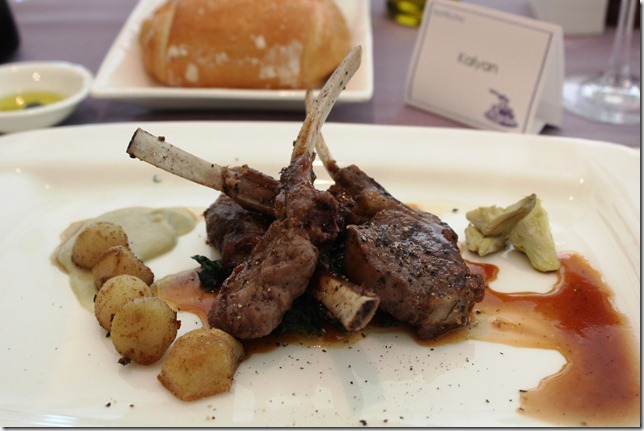 And then just the thing to cool down the passions aroused by the lamb chops.

My chosen dessert of the Cassis Sorbet. I chose this over the tiramisu and semi-fredo.

You took one one bite and felt a surge of blackcurrant-infused goodness refresh, restore and rejuvenate you. The flavours of black currant in each bite was concentrated and demanded your full attention. It jolted you with its pure flavours and made you smile as if you were stretched out on a bench at Eden. There were a couple of mint-leaves in between and the experience of biting into their iciness in between the blackcurrant haze is probably the closest I would ever come to mountain rafting. 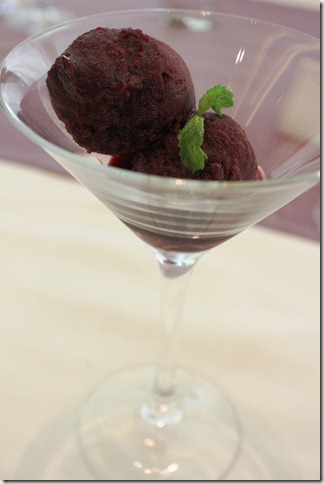 Once again, as in the Arola dinner, the lunch at Botticino is one that I would remember because of the produce.

The tastes of the bell pepper in the pumpkin dip, the poached egg enshrouding the simple toast, the full bodied sensuous chops, the bite of the artichokes, and the fruity vitality of the blackcurrant and the mint leaves.

It was all about the produce as the lead, backed up by condiments. Not the other way round.

One thing which bothered me about the Arola dinner was that I didn’t know what it would have cost as a paying customer. So this time I checked with the folks at The Trident.

Which sort of meant that both the experience of eating at Botticino as will as reading the post would be an equivalent of sitting in a fashion show.

Unless you are a banker with an expense account.

Or a food journalist.

This is not an anonymous review and the lunch was hosted by Botticino. 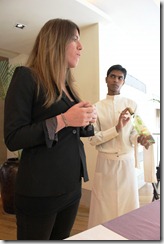 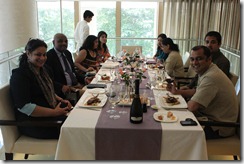 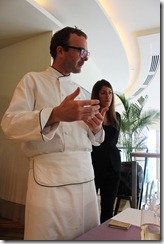 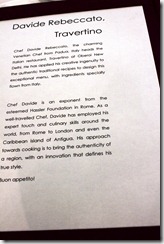 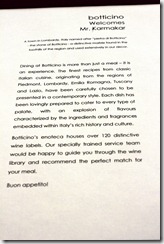 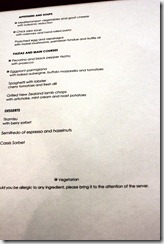 the food does look very enticing though....and the idea of the produce taking lead sounds very nice and refreshing.

Just wish the prices were more meant for us...clearly it isnt.

Kriti said…
Kalyan, I love your blog but I hate your use of prepositions. At and in are not interchangeable.

Kalyan Karmakar said…
@Kriti well you brought back memories of our principal at school. thanks for the link

VindalooandVanilla said…
Great post! I loved Botticino! Had the Valentine's Day dinner, was a 6 course dinner and it came to Rs. 3500 for two excluding taxes. Not to forget the free flowing Prosecco throughout the meal! We were quite lucky to find this offer now that I read the prices of the dishes on your post! Quite an offer don't you think?
28 February 2013 at 20:08

Kalyan Karmakar said…
that's a steal...were the dishes good...am a bit wary of these set meals as they don't put the best dishes...but at least makes is realistic
1 March 2013 at 13:40