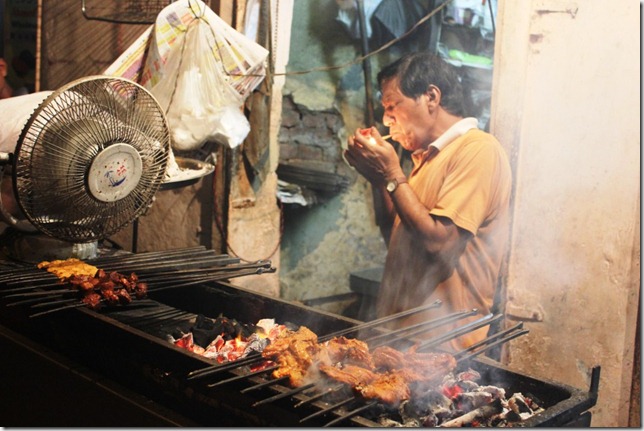 “Well you only live once”.

Anurag and I had just finished our Dilli 6 walk.

We then took the Metro, which Delhi’ites are rightly proud of, from the Chawri Bazar Station at Old Delhi. We got off at Patel Chowk. Anurag’s car and driver were waiting for us there. Easier to park there than at Rajiv Chowk said Anurag.

It was raining heavily and we scampered into the car. Grimy and muddy and yet beaming like two eight year olds coming back home from a game of football in the rains. We were stuffed to gills after three hours of eating in Dilli 6 but there were boti kebabs at Nizamuddin which Anurag felt I should try.

“Well you only live once” said Anurag.

He then called up his wife, Promila.

“We are done with Delhi 6. Thought of taking Kalyan to Nizamuddin. What do you think? We will get a bit late though. It’s raining”

Silence for a while in the car while Anurag listened.

Then finally “Yes, I will get you some kebabs” and he hung up and looked at me and said “She said I should take you there”.

So we drove down the rain soaked manicured roads of Delhi…there was the India Gate in the corner which made our good old Gateway of India in Mumbai seem like a mini me and then there we were at our destination. 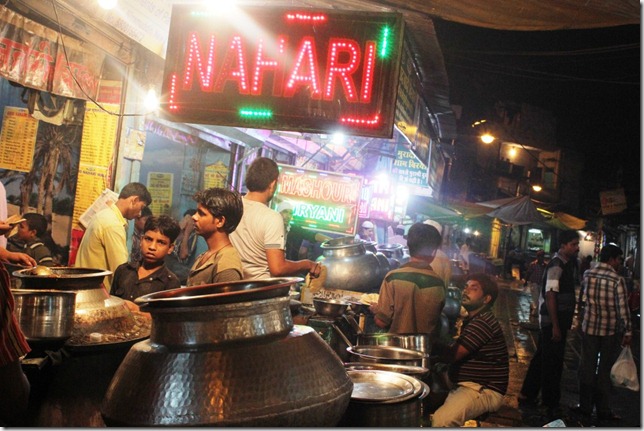 Now Nizamuddin has a Karim’s too. I had once picked food from there. That wouldn’t do for Anurag though. Nor the lane with a series of biryani shops and cinema verite like signs flashing the word ‘Nahari’ one after the the other. This could have been straight out of Fellini’s La Dolce Vita. A kebab track.

“This is for tourists or people from South Delhi who just might come to eat kebabs so that they can talk about it. The real deal is in the adjacent lane” 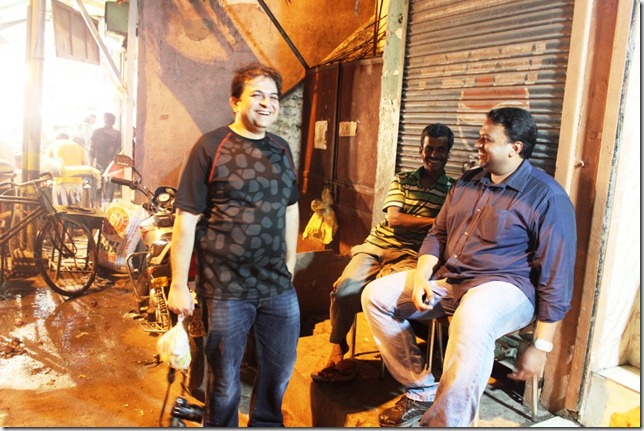 And so we walked down past a bearded gentleman in a Nihari shop by walls with peeling plaster, and rotis being made in the background. I stopped to take a photo. The setting looked so Nat Geo.

“Click from the other side. You will get a patch of blue in the yellow”.

I changed sides, looked through the lens, saw what he meant and complimented Anurag.

Does this man ever take credit for anything?! 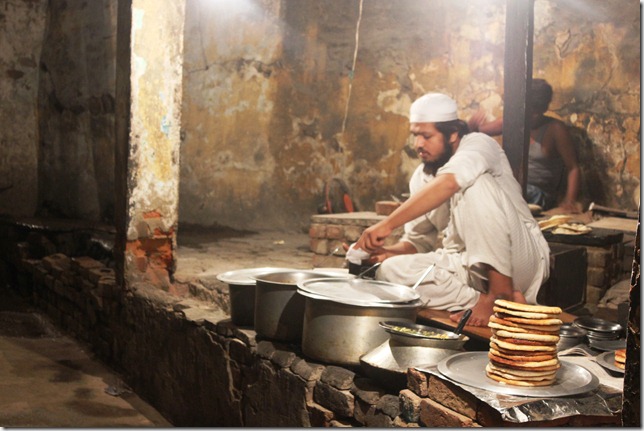 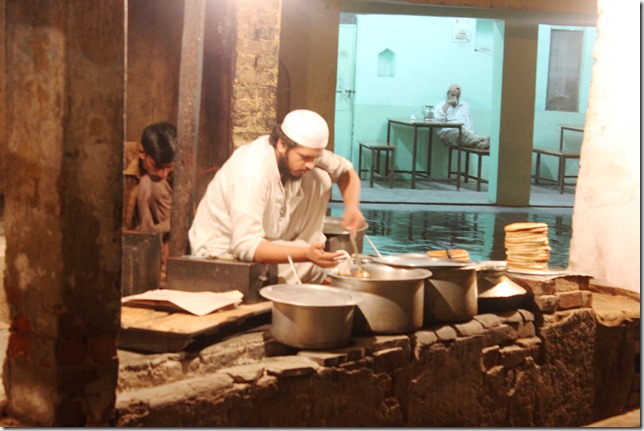 We then walked on as Anurag briefed me.

“We are headed to Ghalib’s. They make this boti kebab and there is a story to it which I will tell you only after you have eaten them. They have apparently won a kebab making contest at the Maurya Sheraton. I have no idea what the context was.  Also keep a look out for the guy who makes them. He is the Clint Eastwood of Nizamuddin. A stud. Takes out a biri and lights it as he makes the kebabs. Oozes attitude. Keep your camera ready” 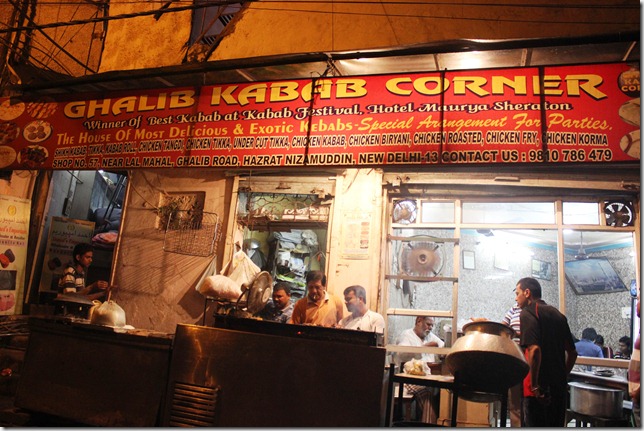 Well we were at Ghalib’s after less than half a minute. I didn’t need to really rush and prime myself up with the camera. Like Ustaad, the jelebiwallah at Fort, the Ustaad Kebabwallah at Ghalib’s loved the camera. He happily lit up and gave a few 50’s black and white Bollywood poses once the DSLRs were out. 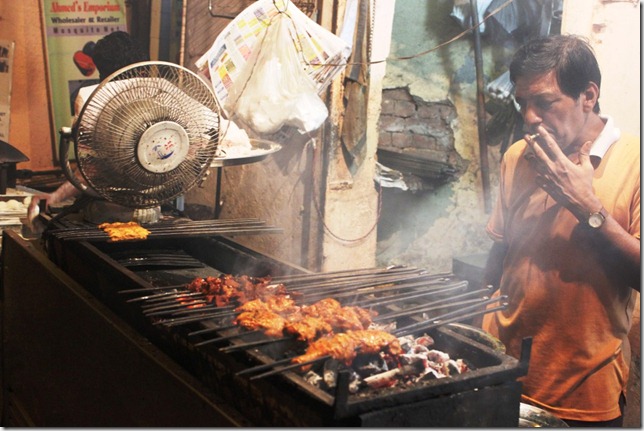 There was a small section inside at Ghalib’s but the weather was so nice that I preferred to sit on the chairs outside with the rain just easing up.

The kebabs arrived. A plate of botis.

I took one bite and broke into a big big smile. These was sheer poetry in meat. The texture of the meat bouncy with a slight scrunchiness. The flavours of the spices very delicate and bringing alive the robust taste of what seemed like organ meat. Meat which really packed in a punch and swirled through your palate. This was heady stuff.

Ghalib, the poet, would have approved.

The feelings evoked by the boti at Ghalib’s that evening best captured  by the song kun faya kun in Rockstar. Strong, intense, melodious, devotional….leaving you with that deep sense of peace and happiness. The sort of food you tapped your feet in beat to.

“It’s made with the heart of buffalo. All beef in Delhi is buffalo by the way.”

“Aah that explains it.”

The boti at Ghalib’s at Nizamuddin was just the sort of blockbuster dish that was fit to be the finale of that magical evening which had seen some great food featuring it. This was the dish that summed up the evening and held its diverse strains together. The dish whose rhythms and symphony accompanied me on the way back home.

Next morning, I cleared the mud on my sneakers as I got ready to leave for the airport when I suddenly saw that the canvas in the sneaker had split.

Yes, Delhi was an expedition that I was proud of and the stories have just begun. 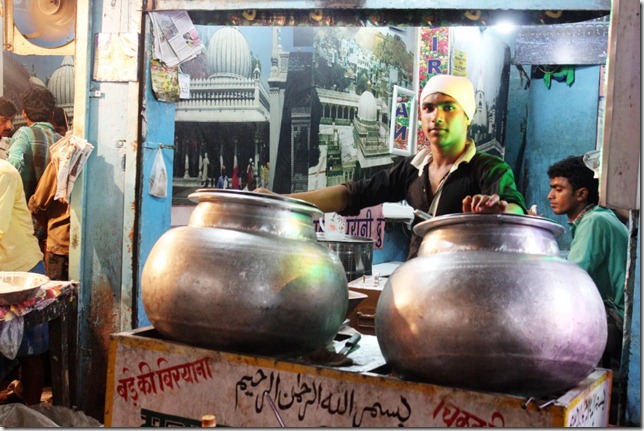 The first of the cooking videos that I did for the India Food Network on YouTube are up here. These are the Bengali recipes. The food fix channel is coming up tomorrow I believe there. Do take a look and let me know how you found it.

Pinku said…
:) am just so glad to know you got to experience Delhi so well in such a short visit.

Kalyan Karmakar said…
thanks Pinku...I really maxed this trip of Delhi and was looking forward to it for so long...live up to its billing
24 September 2012 at 11:56

Anonymous said…
discovered the secret to ghalib's boti kebabback in 1989..when it used to be Rs 4 a plate..!! the sheekh and roomali was about Rs 5.
We always wondered why the boti had no gristle or chewy fibres..what marinade were they using... finally one night i opened the white chest freezer at the back of the seating area and found a few kilos of beef/buffalo hearts...!!!
15 December 2013 at 10:21