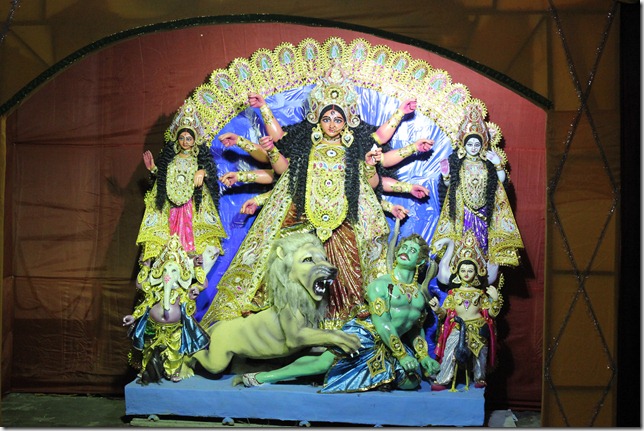 The first hints of Pujos drifted in this year as I called Didu, not once but twice, to get tips on how to make the bhoger khichudi and then shot the same for the India Food Network Pujo special. Coming soon here as the blurb on the page says.

Then I fried some korkore ilish for lunch the day before which someone pointed out was a great start to the Pujo season. 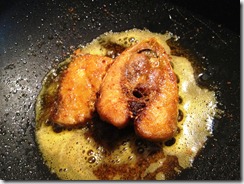 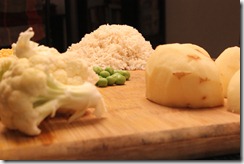 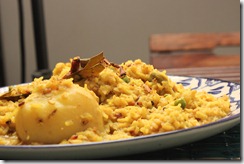 Yesterday at Oh Calcutta, Andheri, with visitors from the UK & Singapore, a Malayali colleague from Mumbai and a non Bong- Bong from South Delhi. Fish fry, mochar chop, golda chingri malai curry, luchi, kosha mangsho and then roshogollar payes, nolen guded shondesh and malpua courtesy the lovely folks at Oh Cal and even a bottle of wine to take back. Post which, my lunch mates said they would take me along wherever they went out to eat. Oh yes, they loved the food too. 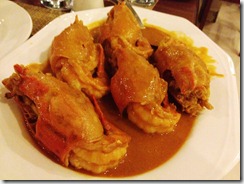 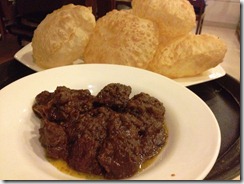 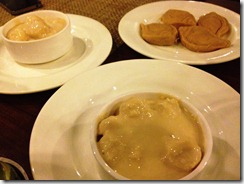 At Oh Calcutta was the playback singer Abhijeet looking as hassled as Pujo organiser should be three days before the pujo starts. He is famous for organising the Lokhandwala Pujo at Mumbai. I went and wished him luck.

Later at night, last minute shopping at Shoppers Bandra on an empty floor for notun jama…far from the madding crowds of Gariahat

And then today I was in an airport packed with folks talking in Bangla in Mumbai. I boarded the craft and noticed that the guy ahead of me was carrying Pamuk’s ‘The Black Book’ and not some management self help book or IIT fiction.

The gentleman beside me in the flight told someone on the phone that he was going to Cambodia and enquired about that person’s thryoid. After which we chatted through the flight. Salt and pepper moustachio’ed Mr Santanu from Oman told me about his soul numbing experience in Auschwitz. The joys of discovering the street food in the alleys of Ho Chi Min..about his fishing trips in the empty beaches in Muscat…experiences of eating snakes and frogs and steam boats…and then intense discussions on corruption from a multi- cultural perspective. The usual stuff Bengali men talk about.

Then Sudeshna, from the next seat, joined in. She is returning to Calcutta after ages for a longish vacation right up to Jogoshattri pujo. In full excitement she told me about the the 3 shops that sell fresh water fish in Thakur Village and like any good Bengali girl took off on vada paos. “Nothing like chops, tele bhaajas, peyajis”. Naturals coconut ice cream, which she was carrying to Calcutta, she loves though.

The flight landed and I got into the coach and noticed men getting up at various corners and giving their seats to ladies.

Got into the car and smiled blissfully as I saw Pujo lights and pandals and then the surreal Rajarhat drive followed. Breakfast plans were being made through twitter, facebook, text and phone, as the miles passed by. Banchharam and Tasty Corner at Gol Park one day. RCGC perhaps on another.

And then exhaustion kicked in and I began to yawn as the car drove in past the gates of our building.

I jumped out off the car, left the bags and ran to the pandal in our building garage suddenly feeling thirty years younger. 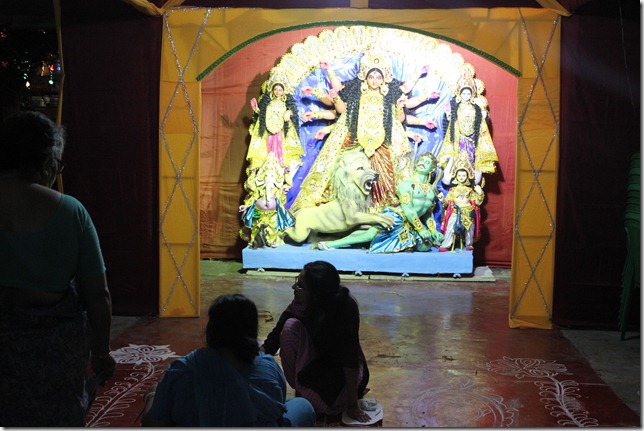 I am in Calcutta for a few days on work and otherwise. Mom has already fed me some fresh alu bhaaja, daal, bhaat and fish curry.

Could feel your excitement seep through the screen.

I wish I could go back to my choto belar pujo too....my father was part of the core team that started the Pujo and he was the secretary for the first year.

Its wonderful that you are spending the pujo at home...with the entire family.

Happy bonding and yes happy pujo to all of you!!

Sassy Fork said…
Hey!!! U forgot to mention the spectacled lady in the trolley area who recognized Finely Chopped!!
19 October 2012 at 21:34

Kalyan Karmakar said…
thanks for your wishes Pinku, Debjani, Somoo, Sassy Fork..was travelling so couldn't answer but had a great time at home
25 October 2012 at 11:53