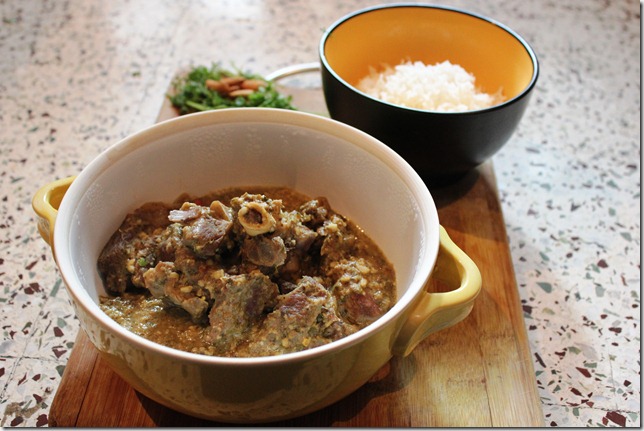 I was in school when the Late Rajiv Gandhi was killed. Shops began to shut down in Kolkata as the news came in. My mother sent me to buy some food from the market. Staples and spices were there at home of course.

Much to her chagrin I returned with just a whole dressed chicken and a kilo of onions. I don’t think there were any other shops open. Or perhaps I had shut off the veggie and fruit shops off from my frame of reference.

Yesterday we happened to be around Pali Market, Bandra, just after the news of the Late Bal Thackeray’s death was announced.

Traffic piled up as cars drove in. I could see a rush of people shopping as the shops began to lower shutters. One shopkeeper, one of our regulars, said that he was amazed by the fact that noone had asked them to shut shop but yet everyone was shutting down.

I decided to join in. 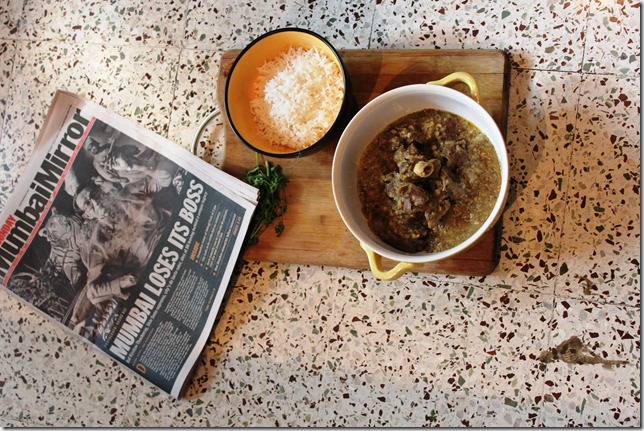 What did I buy this time?

No onions, for I knew we had those at home.

Eggs, chicken legs, chicken mince, bacon, mutton, milk, a pack of noodles, tissues, are what I picked and we rented two DVDs.

Yes, this time I had the sense not to just buy a whole chicken. Plus we only like the leg pieces.

The last two days saw a lot of cooking on my part with Banu not coming to work. She began bunking two days before all this happened.

Tragedy struck this morning when I saw that in the melee they had missed putting in the bacon! Still we did pretty well. A lot of low fuss and high variety dishes.

On K’s suggestion made the chicken legs in the Hainanese chicken paste that Arati had sent us from Singapore la. I used the oven and added the stock to the rice. Took out my Chiang Mai cleaver to chop the chicken legs. Next morning. slightly stale bread from the fridge for a savoury Indian French toasts with coffee breakfast. I went out for a stroll in the evening. Saw Pali Market had opened. The carts largely. Fruits, veggies, paneer stalls but not meat shops, the chemists who stock lot of other stuff in any case, the corner shop too but not the other grocers, shops, cafes and restaurants here. Picked up some carrots, cabbage, capsicum, corn to add colour and texture to the minced meat ginger stir fried noodles that I made for dinner. Again a simple recipe - oil. ginger pieces. soy + chili sauces. minced meat. egg. noodles. salt. veggies. squeeze of lime. stir at each point - Low effort cooking. 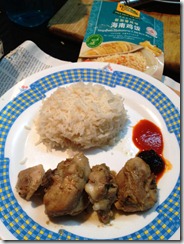 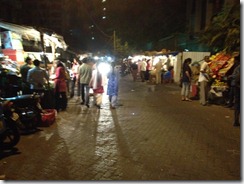 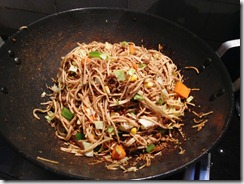 Restaurant, cafes, takeaways were largely shut. Made me wonder what would people who couldn’t cook, or who hadn’t stocked up, would do.

Best to know a bit of cooking as Jamie Oliver says.

What I want to share here though, is my lunch. Quite kicked with it. A bit of a pantry invention test.

My brief to myself…a dish that is not spicy (sore throats and all), quick to cook (can’t spend the weekend cooking), uses minimum dishes (we got a a temp maid to wash the dishes and I wanted to do the cooking before she came to work so that she could wash the vessels).

The other day Simon Majumdar and I were talking about how we don’t really follow recipes to the T. At the most cooking techniques and traditions which we get inspired by. That is what happened this afternoon. As always when I cook.

I am not a good guy to ask for recipes. I don’t think in milligrams. At times while cooking I forget a step or two of what I had planned and make up things as I go along.
At the end cooking is all about whether it gave you pleasure. Was it worth the effort? Worse, did it take too much effort?

So what was the plot this afternoon?

Well there was mutton which I bought yesterday from Meghan Argo's. Their stuff is pricey but good. Still can’t get over how juicy the prawns I picked from them were on Kali Pogo when I cooked the Malay curry.

In my book overcooked prawns are a crime against humanity.

There were your usual spices and onions in the pantry and curd in the fridge. I decided to use some of the almonds that we got in Dalai dry fruit boxes at work. After all, if I was going to hold back on spices then I wanted body.

As I opened the fridge to take out tomatoes, I saw some coriander leaves and took them out.

The recipe then wrote itself out. 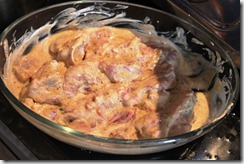 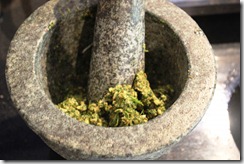 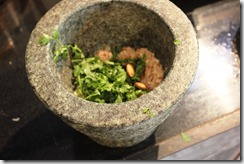 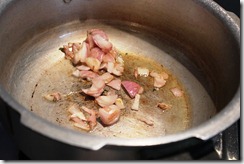 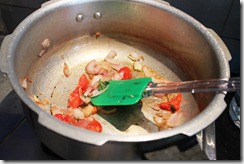 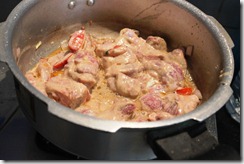 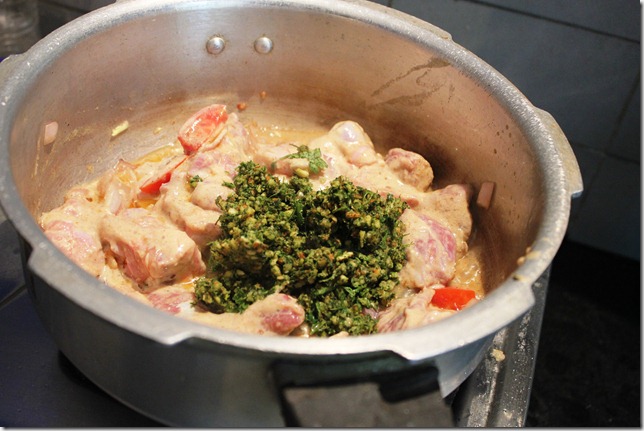 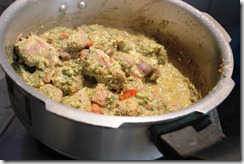 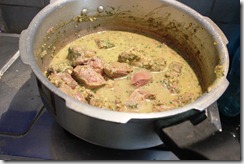 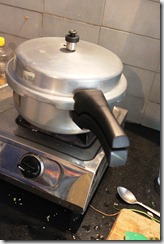 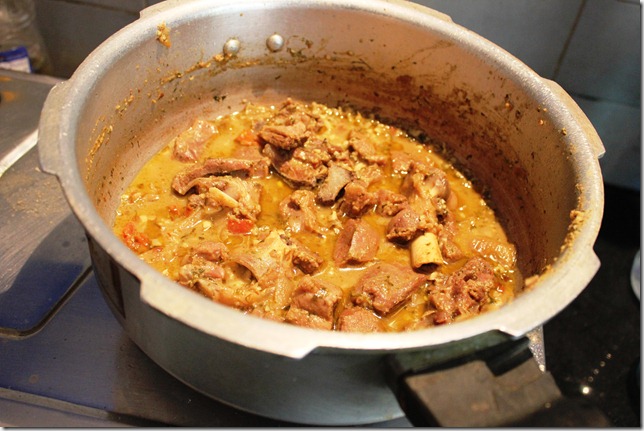 The dominant flavours in the sauce was that of the mutton and coriander and the tanginess of curd. The broken bits of almond gave a beautiful nutty bite all through.

Seven whistles and then twenty minutes in the pressure pan ensured that the mutton turned out to be really soft. 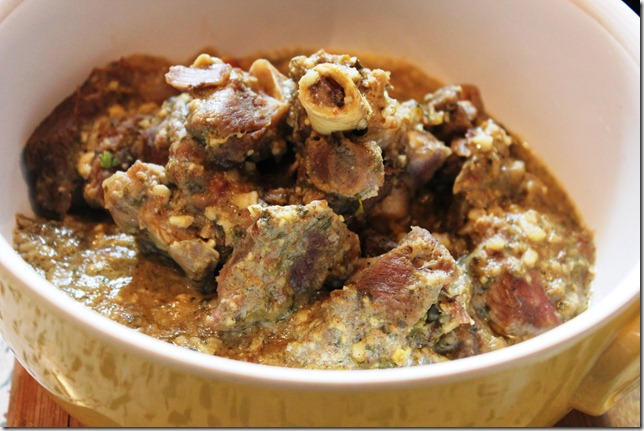 I ate this dish with steamed rice.

In retrospect wish I had picked some frozen parathas though to go with it. Would pair better. Will add it to my list.

Till the next civic crisis then.

What are your favourite quick fix recipes? Has anyone cooked mutton (goat) in an oven? How long would 500 go take and at what temperature?
For Mumbai folks here, what did you stock up with this weekend? Did you cook? What did you eat?
Hope you were not stranded. 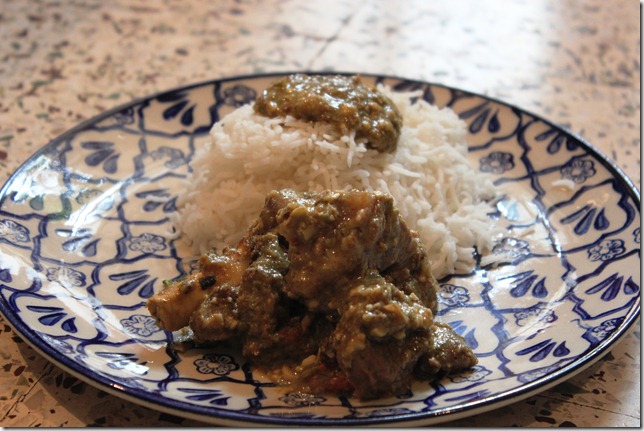 rm said…
Hey Kalyan, I made your chingri malai curry recipe this weekend. Worked out beautifully. The flavours came through brilliantly! Thanks.
19 November 2012 at 14:16