I love luchi… another breakfast with Didu 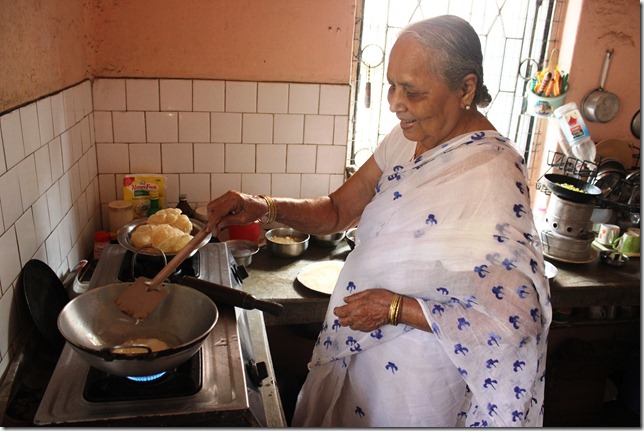 ‘Didu’ is a Bengali term of endearment for ‘Didima’ or maternal grandmother.

What do you do when an octogenarian, who can barely cook these days, sets her walking stick aside and cooks you a four course breakfast, and then as you sit to eat asks you if she should switch on the gas and fry you some more luchis?

If I asked for a couple more luchis that morning, after already having had five or six, if not more, it was not out of deference to Didu’s age, or to make her feel good, or out of social niceties, or because I didn’t know when I would again get her to make me breakfast. It was not because I was leaving for Mumbai later that day. A land far away from her kitchen. It was not because Didu’s luchis were the the first, and only, ‘Indian food’ that I agreed to have for a while I came to India as a spoilt first born. 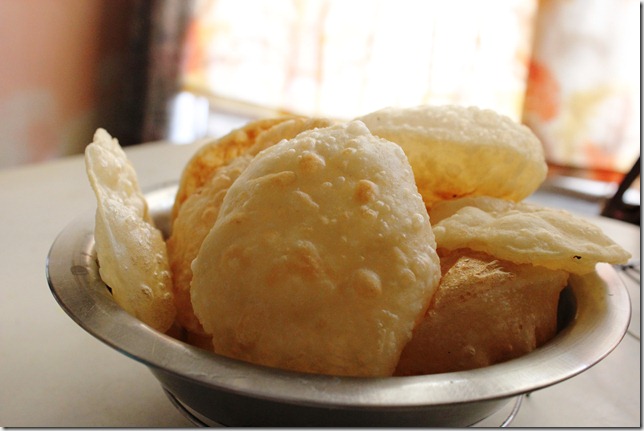 I didn’t ask her to make me two more luchis because I was being polite. I asked her to make them for me because they were so damn good.

As someone who has read and seen enough food books and food TV over the years I can, without thinking, tell you about textural contrast between the crunch of the crust of the luchis and the flowery indulgent goodness of the skin which burst alive when dipped into the simple, rustic, yet full flavoured potato curry, punctuated by sharp burst of snake gourd tossed in chopped onions with a very Bengali touch of Nigela seeds. Enshrouded with the robust and yet demure bites of aubergine fritters enrobed in a crusty gram flour batter finished with simple, innocent rasgullas from the unpretentious, unsung, neighbourhood shop. 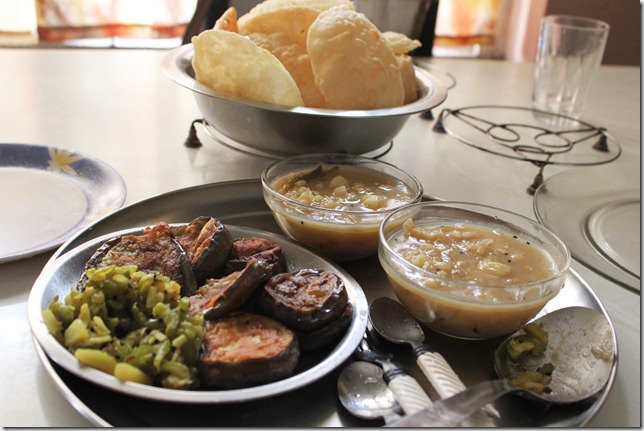 I can prattle away, without giving it a second thought, or I can just tell you that her luchis that morning made me feel like a chubby three year old who for some reason would move around in a three piece suit and bow ties when he came to India.

I asked Didu for the recipe for the potato curry oh alur jhol. Here’s the basic plot.

Saute some split green chillies, nigela seeds or kalo jeere, a teaspoon of finely chopped onions in oil. Add a few skinned and boiled potatoes to it. Gently break the potato into pieces as you stir them in the pan. Add some water. Salt. lime juice. Cover the pan. Let the contents simmer for a while.

At the end you will get this amazing flavoured potato curry where the broth is starchy and delightfully flavoured.

Incidentally ‘I love luchi’ is a wry pun didu made when we lived in her house for a year in the early 80s, after my father passed away, and used to watch I Love Lucy on TV.

Some of you saw Didu’s pics on facebook and asked me how she is. The thing is, even if she is emotionally or physically down, and there are enough reasons for that, we will never get an inkling of that.

So, to answer your questions, she is all good.

That’s what she would say.

This is the link to a post on another breakfast by Didu two years back. Check the Bourdain quote at the end. Uncanny 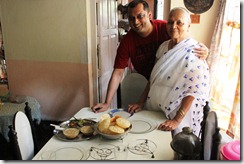 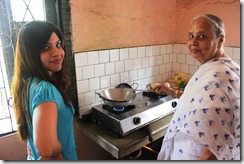 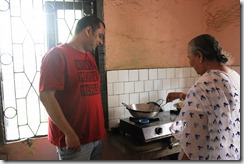 Awry... said…
Lucky you :), i can imagine what beautiful and fascinating flavours can come out of those hands that cook for the family for generations. Luchi, allor torkari and begun bhaja :) you must have had the best breakfast for a while :) ... Suddenly remembered my Didu :) Where ever she is I guess she's smiling down at me for always wanting kacha lonka in my cholaar daal ...
11 November 2012 at 10:29

Kalyan Karmakar said…
@awry well I guess your didu will smile even more for I want a kacha lonka too when she is ready with her chholar daal :)
11 November 2012 at 14:15

k said…
The way she took joint-aching effort to fry each luchi, then turned to smile like it was no effort at all - that's where the real flavour comes from
11 November 2012 at 14:33

rita roy said…
I think it is the pleasure of your company which brings out her happiness....

SRG said…
You're so lucky to have your grandmother around! Here's wishing her many more years of good health.
12 November 2012 at 01:28

Pinku said…
God bless Didu...for her smile, for her spirit and for her Luchi.

I hope you have the pleasure of having many many more such breakfasts at her table, both of you.
12 November 2012 at 10:29

Kalyan Karmakar said…
thank you so much SRG and Pinku for your wonderful wishes
12 November 2012 at 10:54