on November 02, 2012
(wrote this post while on a rather hot Jet flight from Mumbai to Kolkata)

After a crazy yet exciting day jetting across the city I finally settled down in the Jet flight to Kolkata from Mumbai and promptly fell asleep.

Woke up only when the food cart came. The steward in Jet Airways handed us our meals. K's low cal pack had some nice chicken tikkas with an unidentifiable green debris on the side.

I opened mine and got a sense of deja vu.

Last night I read the first ever blog post that I had written on finely chopped. Five years back. It was about the gelatinous faux Thai curry in kingfisher.

Today's tray in Jet looked even more gruesome with limp noodles, orange muck and little boulders. The chicken barely edible, the noodles enough to make anyone do a Didi and storm out. The emergency exit looked so tempting. There was garam masala in the lukewarm monstrosity.

They don't serve desserts in Jet any more. Just fruits. The veg trays looked better in the next aisle.

I was quietly putting the food back when k called for the steward.

'Can you give him a veg tray? He couldn't eat this'

'What happened?' said the steward with a look of genuine concern.

'It's inedible. The noodles has garama masala.' I piped in

The steward looked flummoxed. This is new and I have never eaten it sir but I will change it' which he did promptly

To be fair, the veg tray, which was a dry lubia with raisins and a sort of masala potato puff on the side, was a lot better.

But that tray of hideous bilge.... Guys in Jet that's so not on. Very disappointed.

Btw had a lovely ultimate iced mocha in the Mumbai airport Coffee Bean and Tea Leaf. Pure chilled melted chocolate the way Nigella meant it to be 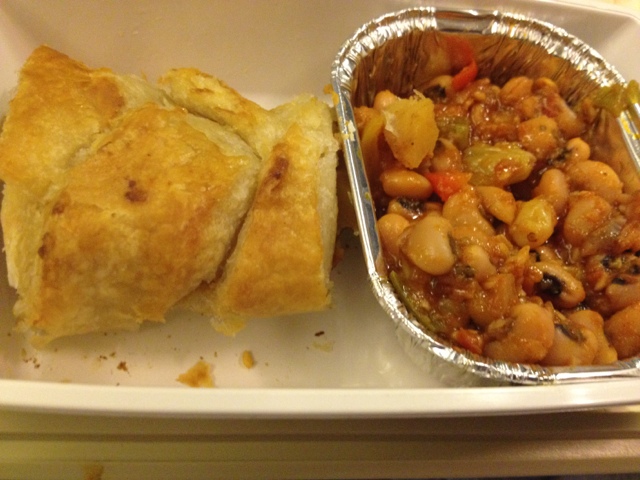 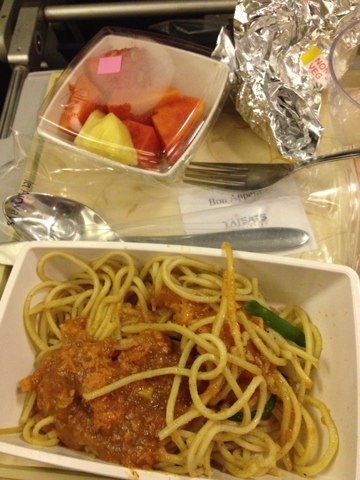 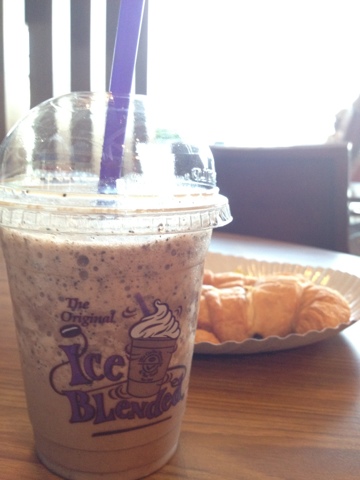 Atanu Dey said…
With KF becoming the king of bad times and Jet dropping its standards, airlines travel is certainly not the same any more
2 November 2012 at 22:42

Anonymous said…
Does it occur to the author that perhaps Jet Airways was competing on margins (food, towels, prices) that have eventually proved far too expensive too maintain? That the crappy food and raised prices are a result of undertaking an unsustainable "business model"?

Airlines should concentrate on getting you from A to B and at best offer snacks/tea/coffee. Airports could take up the business of food and drink. Indeed, that combination only makes sense. Unless you're flying for more than 3 hours.

Amitabha said…
In fact my recent travels on AI / Spicejet / Indigo has changed my opinion on service and in-flight food. All three of them have very good food service (the later two more). Ofcourse, no flight is a cheap airline anymore ... all cost the same as far as ticket prices are concerned :)
3 November 2012 at 08:57

Kalyan Karmakar said…
At anon, my point is if you call yourself a full service airline and charge for food then it has to be edible. Simple
3 November 2012 at 10:31

Kalyan Karmakar said…
Amitabha, you are quite right. There's not much Obama difference in fares between full fare and so calle low cost. I've traveled a fair bit on indigo of late and I like the punctuality, efficient service and their sandwiches taste way better than the nonsense one has had on jet of late
3 November 2012 at 10:33

Poorna Banerjee said…
On another note, last year I flew down to Kol in Air India and the food, though veg, was awesome (i.e. Polao, alu dum and paneer mattar, a packet of flavored yogurt and gulab jamun) and piping hot. Followed by coffee, which was slightly bland, but still doable.

I flew Kingfisher last year as well, and the food was a cold veg sandwich, which was, however, quite edible (lots of veg with mayo and a soft french bread). So I think I am quite sad that Jet gave this to you. Make up, please, by eating bucketloads of food in Kol.
3 November 2012 at 18:54

Anonymous said…
Agree with you totally. And the thing is we complain for Jet doing this because it started the whole awesome flying experience. I remember the days of feeling so welcome, with great unlimited food and beverages option etc. Now when its service feels worse than so called low cost, you feel let down.

simi said…
My husband was a big fan of Jet airways. Last few trips he has been so disappointed with the food that he has stopped flying jet altogether. He prefers flying LC airlines and paying for better food! Sad state!
6 November 2012 at 21:30

Kurush F Dalal said…
Sad to hear how far the mighty have fallen .... have stopped flying anyone but Indigo ... love their food which one has to buy and where one can choose that which one wishes.
8 November 2012 at 15:13

Kalyan Karmakar said…
@sime the LC are not that LC thoug...which is sad...hardly any price diff

@kurush the indigo sandwiches are pretty good even when it was part of my last ticket...jet needs to wake up...this is the airline where i once refused a snack as I had an angsty tummy and the steward found some dhoklas and got me and said I MUST eat something at least
9 November 2012 at 12:18

indosungod said…
I remember after the sad trans continental food Jet Airways's food was a pleasure. These days it is better to fly an airline that does not serve food. I used to be so proud to say how Indian Airlines (meaning the airlines flying in India not the namesake) had the best airline food. not anymore. Food for the times I guess.
16 November 2012 at 19:29

Rajvi Bhow @ Straight talk said…
I had a similar experience on Jet and in the Bombay - Kolkatta flight. And this time it was the veg meal that was unappetizing. They served lain paratha and chana dal for breakfast!!

The dal was not even properly cooked. Forget the taste, even the selection of items is not appropriate. I mean who eats dal for breakfast? And when you are travelling on a hungry stomach (read early morning flights) you do look upto some nice warm food.

Unknown said…
Delhi is well connected with direct flights to all or any the key cities in Bharat and also the world. There square measure frequent flights from Delhi to Chennai center to metropolis. roughly all the national airlines take direct cheaper flight to MAA.