Tales from The Pantry 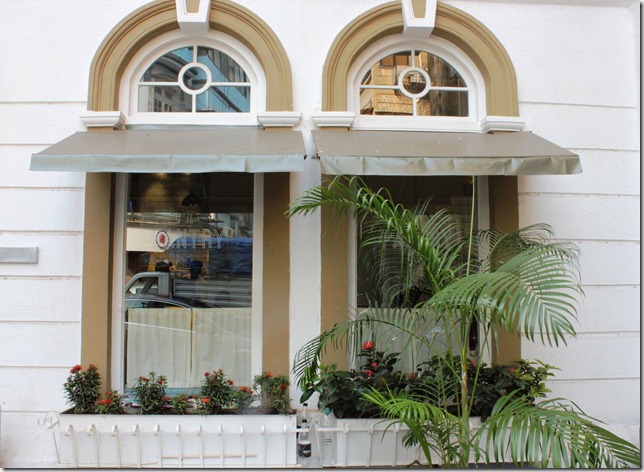 There are some mornings when you wake up basking in the sun. You want to jump up and seize the initiative. Make things happen. Turn over a new leaf. Carpe diem and all that jazz.

I am talking of trying out a new breakfast place on a Sunday of course.

I had heard lot of good things about the newly opened The Pantry in Kalaghoda and had seen some pretty pictures of it on facebook. Seemed like a good place to try out.

So we drove off a bit after noon, down the Sea Link which has become so fashionable to photograph and upload on twitter, into the loving warm maternal welcoming arms of Fort in South Mumbai. A  little bit of driving around its inner lanes, past the Blue Synagogue and the Kalaghoda Café and there we were at The Pantry. Got parking in the narrow lanes in front easily as it was a Sunday. 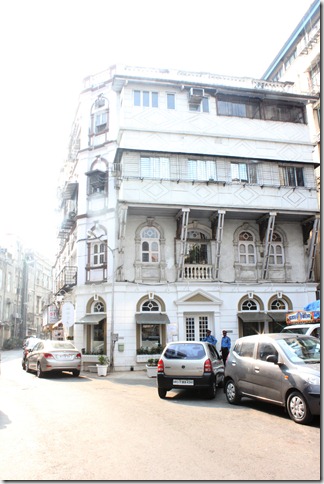 We walked in and saw that the place was packed. The cheerful white décor and the sunny buzz reminded me of Bill’s at Surey Hills, Sydney, where I had a great breakfast.

One difference was that folks waiting at Bill’s had queued up outside. The Pantry was more chaotic with people waiting inside the restaurant eyeing the tables which were full. The Pantry guys didn’t even take the names of the folks waiting. It was a free for all. That is when all the table grabbing training at Candies on a Sunday came to use. I saw journalist Neeta Kolhatkar there at Pantry, a twitter friend. We chatted for a bit and then as I saw that they were getting done I dashed in and took their table much to the chagrin of those waiting before us. When it’s close to 2 pm and I have yet to have had breakfast then I can be the king of the jungle. Or the class bully. 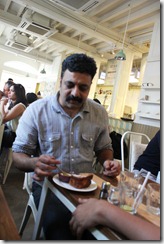 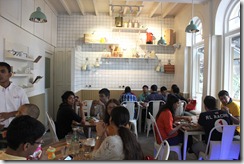 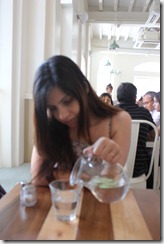 We had got ourselves a nice table by the window and once settled were made to feel comfortable by the smiling waiter who welcomed us with a jug of water with cucumber slices floating in it. There was a big sign exhorting people not to be in a hurry unlike the cafe next door whose menu said that the waiters had the right to ask you to leave if you took too much time. 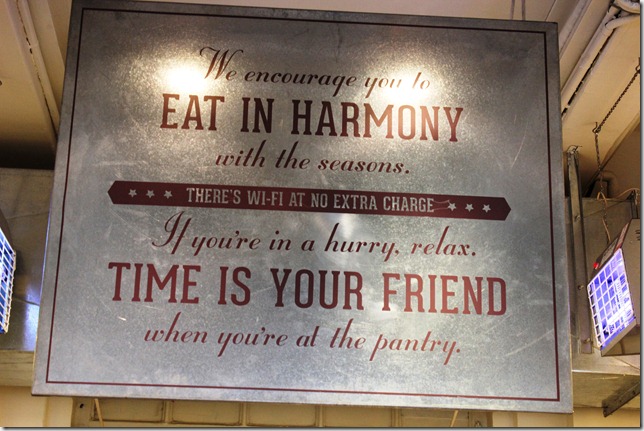 I started off with a nice refreshing drink of pomegranate and sweet lime juice which had a lovely balance of tanginess and sweet which was like an oasis in the sultry sunny afternoon. The mixture of juices a throwback to the ‘maramaris’ and ‘ganga jamunas’ of Mumbai’s juicewallahs.

Everyone around me seem to be having the home-made lemonade and adding sugar syrup to it. 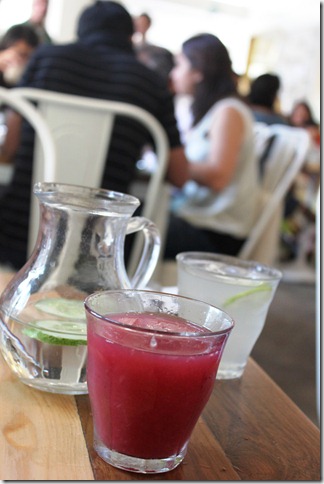 We tried the Sammy. A pulled pork brioche. The brioche was indulgent just as the pork was decadent. The over-riding flavours Asian…char siu…sweet. One luscious mouthful after another.

The apple and gorgonzola sandwich was recommended by friends on twitter but then an apple is best in my book when put in the mouth of an Obelix special roast boar. So I skipped it this time. 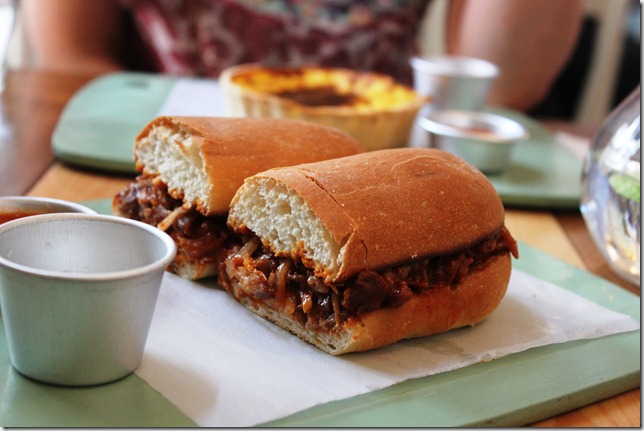 The quiche Lorraine was the queen of the show by miles. Possibly even the empress.

It had the ‘inner thigh wobble’ which Nigella famously wanted her cheesecakes to have. Worked beautifully in the quiche too. The refrains of egg, cheese, ham…separate, distinct…and yet coming together in harmony. 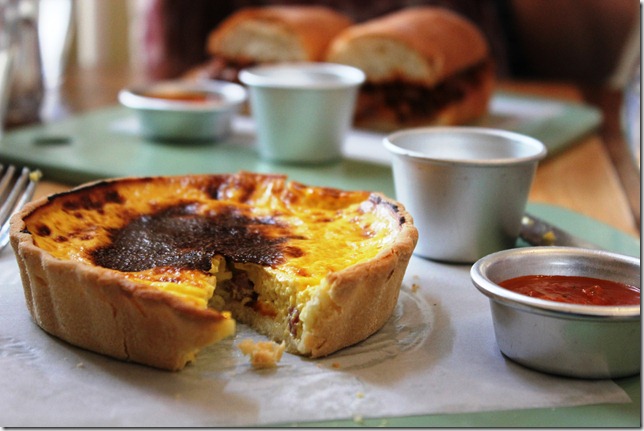 This was cooking which ‘respected the produce’ and produce is what pantries are about right? In fact in The Pantry they showcase the name of their suppliers, most of whom are local.

Both dishes were served with ketchup and a very potent house mustard. 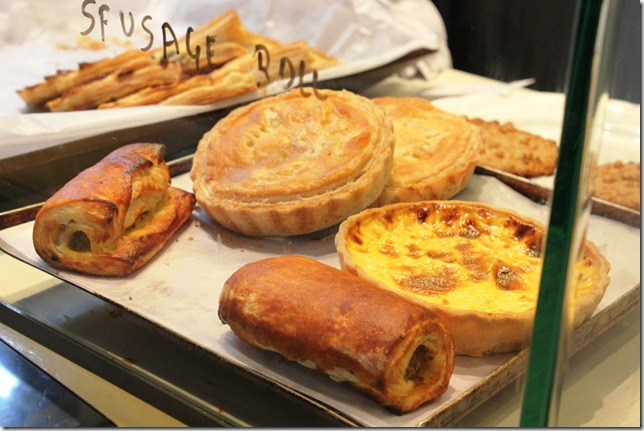 I have spent many afternoons eating in small, old, eateries in Fort, chatting with strangers around me and that’s what happened in The Pantry too. Next to us were a couple who turned out to live close to where we do at Bandra. Like K, Javed is a copy writer. And a trained chef, who told me that most red meats in India are organic unlike chicken. ‘Organic’ came into play as we realised that his wife, Jennifer, and him are planning to set up an organic cafe at Bandra very soon. She already supplies organic desserts to the Bagel Shop and sells her stuff at the Farmer’s market. Bandra, advertising, food…there were lot of connections going and that’s how the mood was at The Pantry. 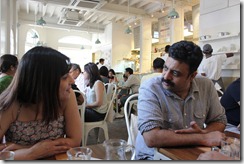 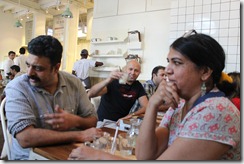 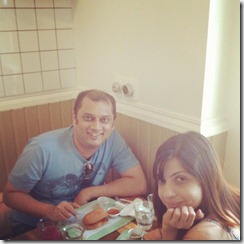 I shored myself for the long drive with a coffee and bread pudding which was a tad thick and dry but had an interesting crisp crust to it. 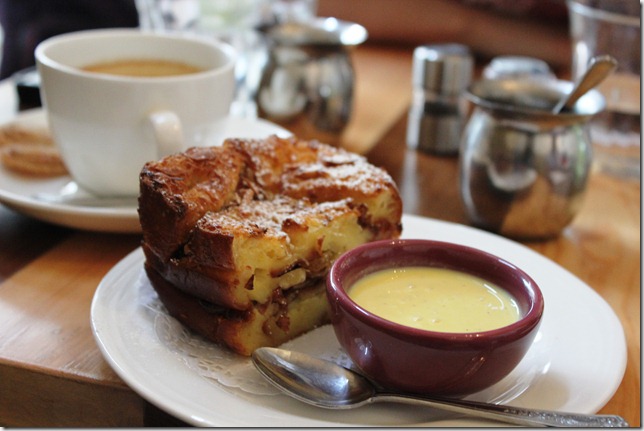 We did pick up some bread from Kalaghoda Cafe next door. At 95 Rs I thought I would have to wear a tux to eat it. The bread has turned out to be pretty good though.

We drove down to the new Starbucks. There was still a queue though so we took some touristy Starbucks Darshan pics and left.

Nothing compares with a Sunday in town. 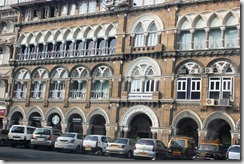 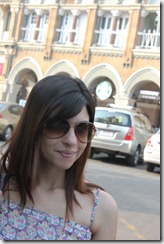 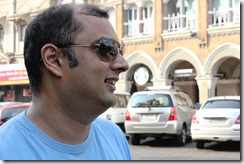 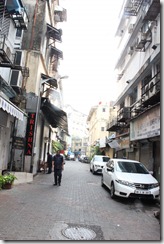 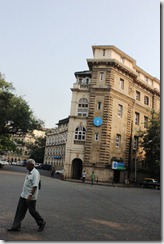 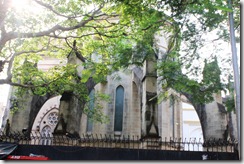 vandana rajesh said…
Very nice post as always..the perfect way to spend a Sunday. The Kala Ghoda and fort area always has so much in store, one can go back there again and again and still not have enough. Is The Pantry somewhere near Trishna?
1 November 2012 at 14:15

Kalyan Karmakar said…
thanks Vandana...completely agree with you on Fort. yes Pantry is very close to trishna
1 November 2012 at 15:22

~j~ said…
Ah! I had walked past this place in August when work was still on. I looked at those lovely white windows and wondered what was going to get housed there.

Great post, Kalyan. I miss town and fondly remember all the wonderful times spent at Sundance, Universal, Britannia, Mondegar, Gaylords, Mocha, and so many others across the 2 years, 3 months and 23 days that I worked in Churchgate/Ballard Estate.
1 November 2012 at 16:38

Kalyan Karmakar said…
Thanks J. so glad you liked it...the five months I spent working in Fort where one of the highlights of my time in Mumbai
1 November 2012 at 17:03

F said…
My friends and I visited the pantry a few days after it opened. For students on an allowance the Pantry was like a dream! Beautiful decor, tasty food and overall it leaves you with a happy feeling that takes a while to wear off :)
Do try the Banoffie Pie next time, and the Roast Chicken with Thyme and Anna potatoes. We really enjoyed these.
8 November 2012 at 21:28

Kalyan Karmakar said…
Thanks for the tips F and the prices were rather nice indeed for the place
12 November 2012 at 11:17