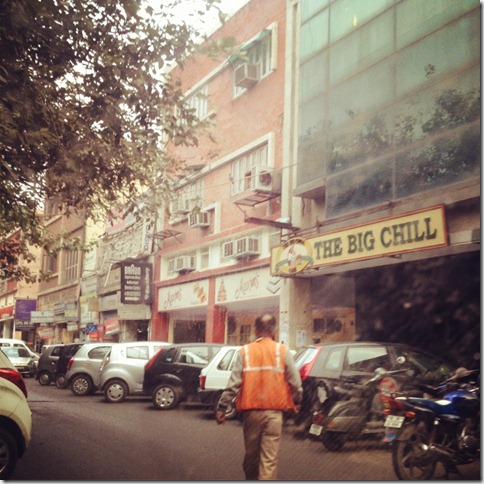 A big thank you to those of you on twitter and facebook who suggested Big Chill Cafe to me yesterday.

I was in Delhi for a short work trip. Landed at about ten in the morning. Grey, windy, chilly, Delhi from the tarmac looked more Bourne than India. It rained later and the weather was a pleasant change from Mumbai and I suddenly didn’t feel that silly about my red hoodie. 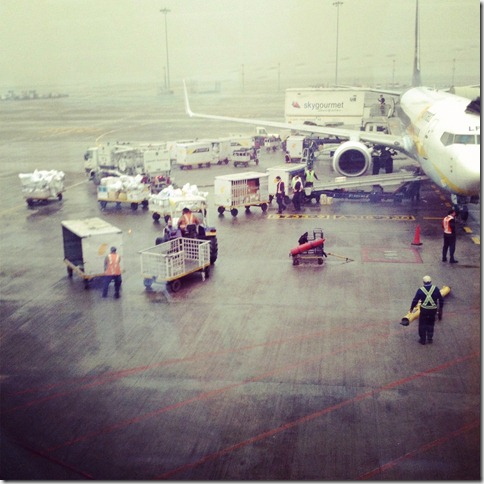 I had to got to East of Kailash which was about an hour’s drive from the T3 terminal which made me wonder why people complained about distances in Mumbai.

The other recos one got were Al Kauser for kakori kebabs and Nagpal’s for rajma chawal.

We stepped out for lunch during a break at work. Hearing about our food plans the car driver first took us to a rajma chawal place which he knew of…only to find out that it was now a McDonald. My lunch mate too turned out to be the sort who prefers to try out the local cuisine while travelling rather than go to an amorphous upscale restaurant. Well, going by the number of recos, Big Chill could be counted as a Delhi classic I reasoned.

We reached Kailash Nagar market which looked so beautifully laid back in the mist. Sagar, originally from Amravati in Maharashtra, now based in Mumbai noted that the locality seemed to have relaxed, full of life, feel which he often missed in frenetic Mumbai. In fact our conversation over lunch turned out to be pretty interesting as Sagar told me that in his opinion Maharashtrian cuisine…home cooked and street food…is a lot of richer than the Maharashtrian food that one gets in Mumbai. The much lauded vada pao, he pointed out, more more a Mumbai and Pune thing than pan Maharashtrian. He felt that Mumbai often doesn’t show the sort of love for food which the rest of the state does. He lamented the fact that one could rarely get hold of classics like the yin and yang pandara and tambara rassa or the hearty masalas of varli baigan in restaurants here. As we both sat and talked, in between a break from our jobs, Sagar shared his dreams and plans to someday, somehow harness the glory of home cooked Indian, and specifically Maharashtrian food, for those who don’t have access to it. Hopefully someday his love for food and life will find some outlet. 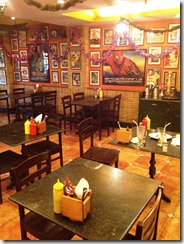 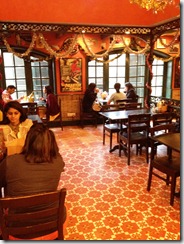 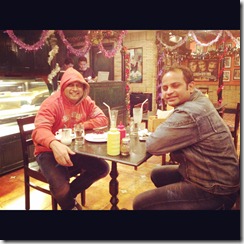 Big Chill has four branches in Delhi I was told. The one at the Kailash Colony market, the eldest, about 12 years old.

Three stories with an American deli feel and Hollywood posters strewn all over…the sort of space that is so rare in Mumbai as Sagar pointed out.

The feel inside, very relaxed, a warm buzz flowing from across the tables. 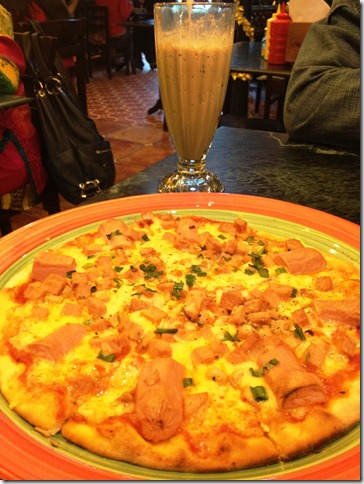 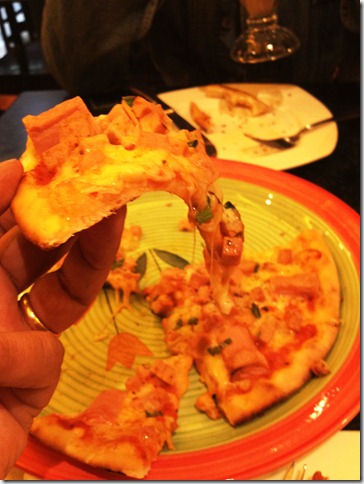 We started with a pizza. Went for the chicken one instead of chorizo as Sagar doesn’t eat pork. The thin crust beautifully supple. Passed what I call ‘The Knife’s Bend Test’. Sagar found the cheese a bit excessive but was it nice on a cold afternoon if you ask me.

The other dish that we tried were the lamb chops that I think Antara suggested on facebook. There were a number of options so I went for the blue cheese one.

The dish was a classic. Chops beaten fine, succulent, charcoaled, the flavours of the blue cheese sauce seductively intense…packing so much flavour. A dish that suddenly added bursts of colour to the very grey afternoon. The lamb chops in cheese sauce alone were worth coming to Big Chill for. 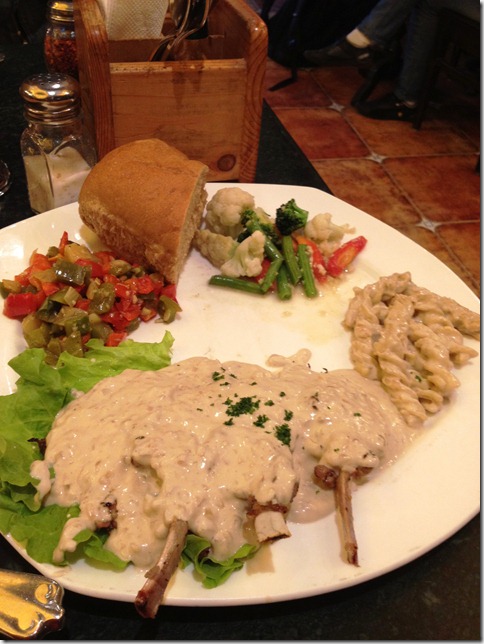 Loads of folks recommended the blueberry cheesecake. Wouldn’t have ordered a dessert if I was alone. Since I had company I ordered the cheesecake.

For the record I had 3/4th of the cheesecake. The flavours were beautifully balanced, not too sweet, the consistency that of the ‘inner thigh wobble’ that Nigella says cheesecakes should have. The actual bites of blueberry like fireworks on Diwali night. 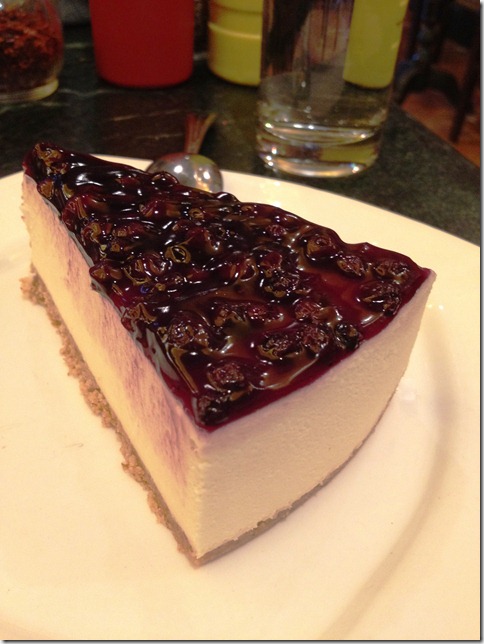 Spurred me to pick some more desserts and I later saw the warm folks at Big Chill folks had slipped in a chocolate mousse on the house.

The chocolate decadence was pretty phenomenal too and tasted so good back home in Mumbai too.

Here’s the facebook chat on the Finely Chopped page:

Dilliwalo any 'must eat' near east of kailash. Here for a short work trip. Might not be able to step out but still...

For those interested, Jet served a nice omelette for breakfast and landed ahead of time. My return flight with Air India was chaotic with not even the steward knowing when it would take it, the food… atake it or leave it inedible veg dinner…the aircon not switched on so that we get acclimatised to the heat before landing in Mumbai perhaps?

Incidentally my good natured heckling at the launch of Vikas Khanna’s new book at the Literary Festival made it to The Times of India the other day. This is also where, ahem, someone asked me for an autograph for the first time ever. Thanks Shreya. That felt special. 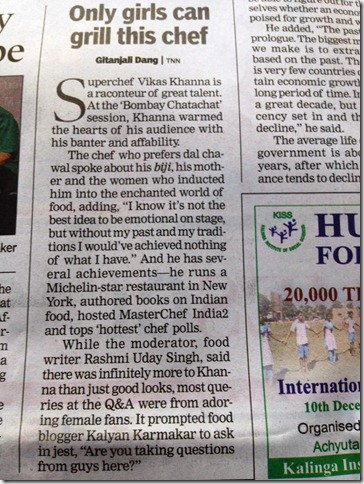 Poorna Banerjee said…
Ah for God's sake, this place is such a treat! Mostly packed full, mindyou, at least on those times I went. However, I have been told it is pretty crowded most of the times.
12 December 2012 at 23:38

k said…
Big chill is a big mistake if you are dieting, like me. However the dark chocolate mousse has my respect.
13 December 2012 at 00:59

indrani said…
Lovely piece on one of my all time favourite restaurants. Fortunately, we lived in East of Kailash for 2 years and Big Chill is the one place we would take all our guests to. Some of of my favourites included their frozen yogurt and their frozen yogurt smoothies. Happy to be reminded of the warmth of Big Chill once again...brings back fond memories. Thanks Kalyan :)
13 December 2012 at 13:39

Kalyan Karmakar said…
Indrani, tons of people have been telling me that Big Chill is/ was their favourite from Delhi...and I am not surprised...it's a happy place
13 December 2012 at 22:16

evolvingtastes said…
'Yaay' to your co-worker Sagar. Look forward to more from him about Maharashtrian food!
21 December 2012 at 23:23