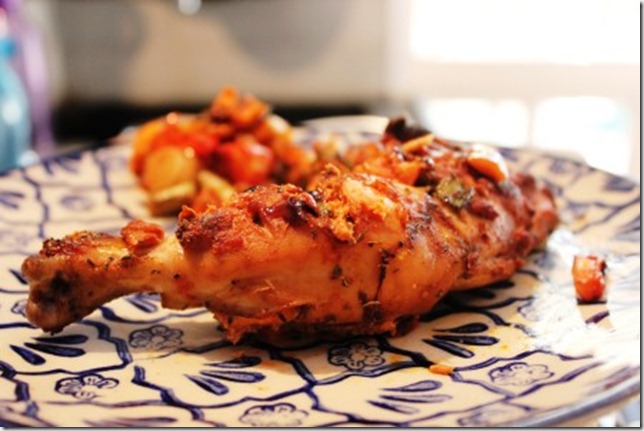 If I remember right the last season of Masterchef Australia had a ‘dude food’ challenge.

I missed that episode but I guess ‘dude food’ would involve meat, grills, simple and uncomplicated recipes, forages of what’s at home without looking at dictats of recipe books. Similar to what I made yesterday afternoon.

Bored with two underwhelming Bengali dabbas from two different people I made some hakka noodles day before night. Yesterday I wanted to make something even simpler. I called up Meghna Agro at Pali Naka who, god bless them, send even a chicken leg within ten minutes of calling them.

I took the chicken leg, washed it and scored it (slashed it with a knife). I am a big believer in scoring meat. This allows the flavour of the marinade, herbs, spices used permeate into the meat. You should specially use the stronger flavours in your recipes for this.

The plan was to roast the chicken on a small bed of vegetables which would take in the flavours of the meat and the marinade and forma nice side salad.

The marinade was pretty wild. 1 chicken leg smeared with 1 tablespoon each of African Mamma’s habanero sauce, hot sauce from Ellipsis, some salt, a liberal dousing of balsamic vinegar and then as a last minute thought slapped some of the amazing choriz and cream cheese dip, that Anil of Bagel Shop gave me, onto the chicken. 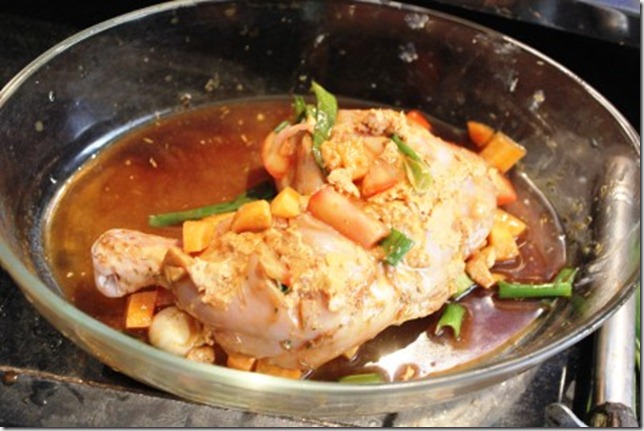 I put this in the fridge for about 20 minutes and then preheated the OTG (a must buy for any lazy cook) for 10 min at 200 C.

I then took the chicken out of the fridge, spoon the marinade from the sides of the dish and put it on the chicken and put the chicken into the pre-heated oven. I didn’t cover the chicken because I wanted a bit of the crinkle. 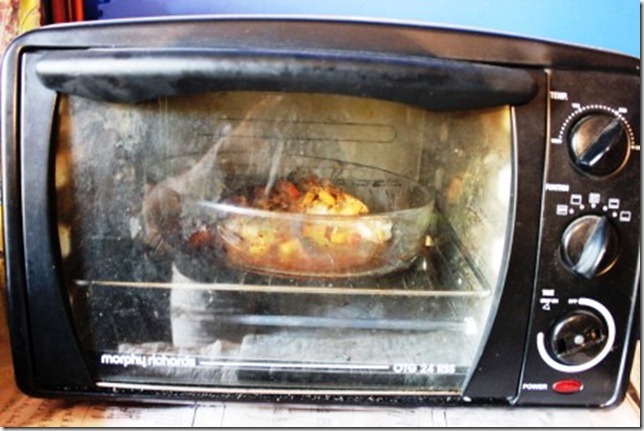 30 min at 200 C and we were done. I let it rest for 10 minutes for the juices to settle down. Tried to photograph in  a cluttered kitchen and then had lunch. The habanero, hot sauce, ginger bits had combined well to give a deep heat kick through the chicken. The dip spread gave a nice lingering taste of choriz and cream cheese on the surface of the chicken making the taste quite layered. The ‘veggies’ dressed in the marinade and juices of the chicken were ready to join the party. I had kept some slice bread to go with it but the chicken and the salad made for a complete meal. 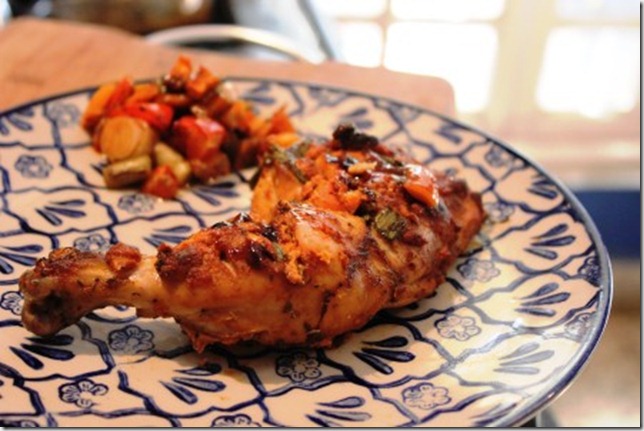 Deliciously Directionless said…
That looks delicious! Must try some time. better yet, try to get the husband to make it ;)
17 December 2012 at 13:01

Kalyan Karmakar said…
@Prachi I should get an award for women's empowerment or something then :)
17 December 2012 at 13:08