Jet Airways... Time to wake up

on December 05, 2012
My bad run with food on Jet Airways continues.

This time I bough a mangalorean veg sukka dosa on the flight back to Mumbai from Jaipur.

The dosa was plasticky & a far cry from the 'soft thin dosa' the flier promised. The ice cold vegetables in some very strong coconut paste which just revolted the palate. Two bites and I left it despite paying for it.

Why waste stomach space on bilge when there is a nice meal of chicken grilled in Asian Gourmet House Thai barbecue sauce & Mama's Tom Yum cup noodles waiting at home?

I came to jaipur by Air India. Took an AI flight after ages. They actually served a nice hot breakfast of upma, idli, bun butter jam, fruits. Tea, coffee too.

In good old AI style they plonked the pack on the tray.

But the food was good.

You ate. You slept. You disembarked .

What more could a man ask?

Time to figure out where my AI frequent flier card is

Where Jet still wins though is service On seeing that I had left my roll unfinished the steward & the air hostess asked me what the problem was. Voluntarily returned the money though I hadn't asked for it. Also asked me to give my feedback so that they could give it to their base. This is a new introduction apparently. 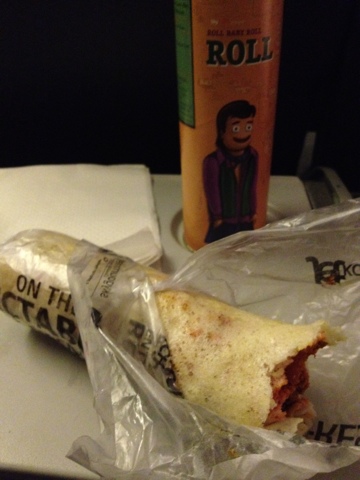 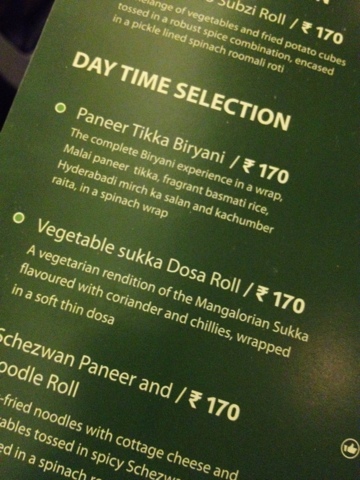 Ant said…
Been sad for quite a while with the decline of Jet's food quality. Used to love their English breakfast, sausages, eggs et al. Used to specifically insist on the evening Chennai-Kol Jet flight at one point to get a hand on amazing idiappam and chicken chettinad I had once had in that sector. Good ol' times
6 December 2012 at 01:38

Kapil Bahl said…
There was a time when Jet had the best food, it is sad that they have fallen to such times because of revenue only.

Poorna Banerjee said…
I have recently had a great AI flight experience... and I WAS asked if I wanted Veg or Non Veg food (Yay!). I generally opt for Veg, so I ordered it. A package of moti pulao was served with a paneer dish and curd and salad, a gulabjamun and a very edible chholey. Everything was piping hot, and afterwards, the stewardess beamed at me when she saw I had finished everything on my plate and proceeded to pour a big cup of coffee.
6 December 2012 at 03:13

The Bride said…
I too had a bad experience with Jet food on my flight to India in October. I am one of those who is thought of as insane because I look forward to eating on a flight. And Jet was one of those where I really looked forward to the food. But it wasn't good this time, and I left food which is unusual for me.
6 December 2012 at 11:58

Anonymous said…
The cardboard tube it comes packed in is hilarious! Did you have a look at it? Too bad the food is crappy though!! -L
6 December 2012 at 14:24

Kalyan Karmakar said…
felt hungry reading this...there might not have been options on my flight as it was a sub 2 hr flight
6 December 2012 at 17:52

Kalyan Karmakar said…
other's have come up with this quip with food thing...indigo too...incidentally there was no lid to the tube and the steward apologised
6 December 2012 at 17:53

Amitabha said…
At one time I remember having dinner on a BOM-CCU flight prepared under Jiggs Kalra with a personal note on the dessert ... that was 2003! Today the food on Indigo or Spicejet is way better than Jet. AI ofcourse remains a mix bag of experience ... BTW, did you notice that AI has taken the 2nd position in the domestic market from Jet?
7 December 2012 at 08:43

Rajvi Bhow @ Straight talk said…
I had a very different food experience this time when I travelled Jet. It was during evening and the food selection was really good unlike the breakfast meal I had the last time around. They served (in Veg) a cheese corn tart, some tandoori aloo with chutney and spinach corn patties. Alongwith a fruit plate. It all tasted nice and was very warm too
17 December 2012 at 12:49