If you follow my twitter or facebook feed then you would have noticed that we spend a lot of time at Bandra’s The Bagel Shop these days.

The Bagel Shop, which was set up by the guys who started the now shut Zenzi is a about 5 years or so old. I had written about it a few times in 2009, 2010 on the blog. We weren't regulars though and had not been to The Bagel Shop for a while since then.

The place had a consistent buzz about it though. I would always see folks lounging at The Bagel Shop  when I walk past it on the way to Carter Road. yet for us there was nothing compelling about The Bagel Shop and we had other favourite haunts in bandra.

Then, a few weeks back, looking for a less crowded option close to home we dropped in at The Bagel Shop. Tried the Goan sausage bagel that I had heard about from fellow pork lovers Kurush and Rhea. Plus my guiding light to Delhi 6, Anurag, had told me that the folks at The Bagel Shop get their sausages from a  special place at Goa and that they were different from the average Goan choriz that one gets locally. He was right.

A bage that we had that evening was a beautifully bouncy bagel with an incredibly well flavoured, sharp, saucy Goan Choriz mix.

We had the smoked pork bagel the next day.

The smoked flavours so incredible that you could see yourself sitting by the fireside in a cottage on the mountains as you bit into the bagel. The very delicate layers of great meat, caressed by this incredible smoke flavouring was a work of art and was enrobed in a bagel that had risen to the occasion to match up to the noble pork.

Over a few visits I got to meet, and then became friends with the owner, Anil Kably. He lands up at the shop every morning and occasionally in the evenings too. On one such lucky evening I was the lucky guinea pig, no pun intended, for his very successful Goan Choriz and cream cheese  dip experiment. We sat and mulled over this result of sheer genius over their house baked lavash crackers.

Anil later told me that his wife, who also runs a sushi delivery service, Sushi Koi, is the one who smokes the pork in their house at Bandra. The bagels, which I since then have found to be consistently good, are baked in a little space just opposite Bagel Shop every morning till evening. The recipe given by one of the original Dutch partners, Matan, who is now back In Amsterdam.

We discovered more about The bagel Shop since. The fact that they are one of the few places around to serve decaf and that too fairly good ones. Such a blessing in the evenings.

They also stock organic and gluten free desserts made by Jennifer of Electra whom we had met at The Pantry by chance. Words like vegan, organic, gluten free normally scare me but the chocolate muffins and the oat and resin cookies here are really good. The chocolate, pretty dark and intense in the muffin. The soft granola-like cookie has become a regular accompaniment to my coffee here.

Talking of coffee, it’s so difficult to get coffee and a light bite at the same place in Mumbai. The hummus bagels or even the tuna pesto bagel work at The Bagel Shop work for me at such times though I would find a single bagel too much.

Of the various bagel options I like the multi grain one the most followed by the poppy seed one. Anil tells me that their bagels have less gluten than the classic New York Bagel.

I feel that their quality has improved and some folks whom I have met at Bagel Shop recently too feel that the stuff now is a lot better than before here.

I quizzed Anil about this the other day and he did agree that this is possible. He said that he has become pretty hands on with all aspects of The Bagel Shop since about two years back. Right from the produce used, to the food, the chairs, the cleanliness of the loo…in fact I have often seen him point out dirty messy tables to his waiters.

Yes, this post reads like an advertorial but over many visits packed in a short time I can vouch for what Anil says. And, to be honest, we've become good friends. He'd offered to put up the Bohri Mohalla walk poster when I asked him before we had even met and has some roast turkey and Christmas cake for us today I believe.

So whether it’s for an offsite meeting with my team, or to meet people to work out holiday plans, or to just unwind at the end of the day…you will often find us at The Bagel Shop these days.

You will find us looking as relaxed and as at home as everyone at The Bagel Shop seem to look…including the two kids many evenings back who were intensely discussing Masterchef Oz, dissecting the pastas on their plates and giving the dessert counter a critical look while their parents enjoyed Children's Day on the cane sofas outside.

A state of life that the Goans call ‘susegad’ I believe. 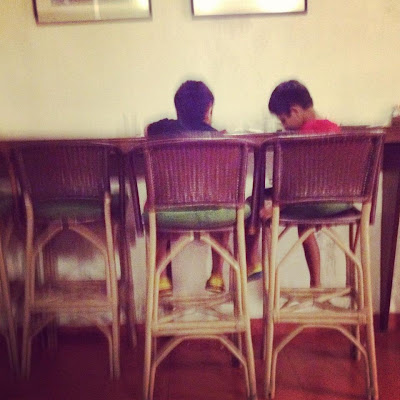 Anonymous said…
wow!!! thankyou so much Kalyan....i hardly feel worthy of such kind words.it is a pleasure to talk about food and especially Bombay's food legacy....... the "food walks" that you have initiated are an incredible way to explore the amazingly diverse options still available in this city.
my Partner Matan Schabracq is still a partner,he started the bagel shop,but now lives and works in Amsterdam where he now owns two successful bars.
once again thankyou for these kind words.....now lets get to that Turkey Roast,shall we?? ;)
20 December 2012 at 08:20

Kalyan Karmakar said…
Anil, it was an absolute pleasure to write this post. Finely Chopped is like a diary of what's happening in our lives and right now The bagel Shop features pretty frequently there. It has been great getting to know you and chatting with you Anil and now for some turkey :)
20 December 2012 at 11:57

Kalyan Karmakar said…
As always Kurush, you are da man. Had your reco in the back of my mind when I returned to Bagel shop. Try out the coffee now...i think it has improved
20 December 2012 at 16:57

Anonymous said…
Interesting review! The fresh juices at Bagel Shop are also very good. By the way, I think you meant "raisin" cookies, and not "resin"!
31 December 2012 at 18:41

dhivya said…
Really nice post Kalyan.. Makes me crave for a bagel.. I was introduced to Bagle during my recent visit to Prague, Czech republic and have been dreaming abt bagels since.. .. next time I visit Mumbai will surely visit the The Bagel shop..
29 May 2013 at 18:20

Kalyan Karmakar said…
Hey Thanks Divhya and hope you like The Bagel when you go there. My closest experience to a traditional bagel was recently at the Biegel (sic) Bake in London's Brick Lane
5 June 2013 at 17:39