Fixing the fish…roast pomfret with babaganoush on the side 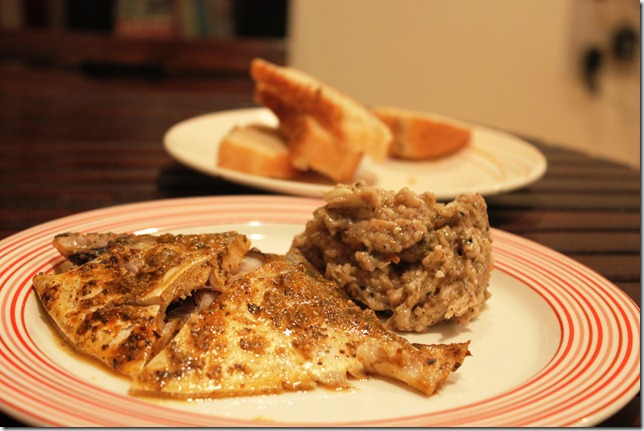 Sometime back I had asked you to help me fix the betki that I grilled last time.

The betki had turned out to be too dry and had a fishy smell to it and was quite tasteless.

Many of you commented and some of the more popular suggestions were:

I did all of that. The fish admittedly was different. Tonight we used pomfret instead of betki. Both bought during the same trip to Khar market a couple of weeks back.

K had marinated the fish in salt & pink mustard that i2cook had given us. To this I came back and added some lime juice which I squeezed over both sides of the fish and a liberal pour of African Mama’s Zulu chilli mint sauce. About 5 tablespoons of sauce over 2 pomfrets & K had used that much mustard. I then poured some of the chardonnay still remaining in the fridge on to the baking tray and sealed it with a cooking foil. I poked a few holes in the foil with a fork for the steam to go out.

I took out the fish and left the excess the liquid in the tray behind. The fish was well cooked. Juicy. The dominant flavour mustard with a bit of tangy heat in the background.

A relief after the dry betki

As a side I tried something different from the mash that we are fond of or chopped vegetable salad. I can’t find the link right now but Prachi had blogged about babaganoush recently. The Mediterranean cousin of Bengal’s Begun Pora. Smoked aubergine lies in the heart of both. Mustard oil, raw onions and chopped chillies are added the Bengali version. Babaganoush on the other hand has garlic, tahini and olive oil I think. I had been planning to make one for a while and Prachi’s post finally got me going.

I asked Banu to smoke a baigan on the gas top and then keep it in the fridge.

I came back and heated the aubergine for a minute in the micro. Then I took 6,7 garlic cloves and then after some scrounging & innovating, 5,6 bottled olives and 5,6 mixed nuts – almonds, cashews, walnuts .- and pounded them in the mortar and pestle. I then added the aubergine & gently pounded it all together. Then I added some salt and sumac powder, blended it with a spoon and then poured some extra virgin olive oil on top. The babaganoush was ready. 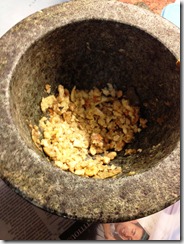 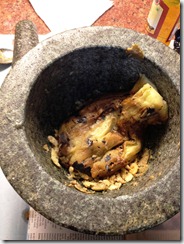 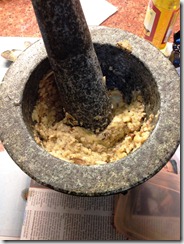 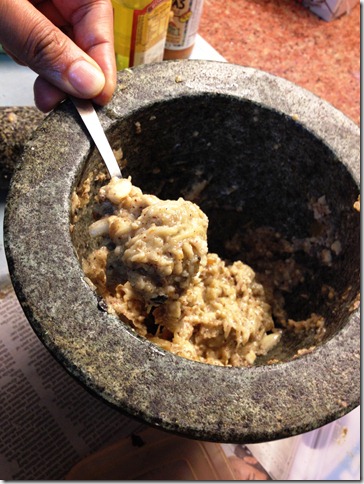 I knew I took some liberties with the recipe but the bites of nuts were a robust counterpoint in taste and texture to the sharp flavours of fresh garlic. A very morally pleasing meal – no red meat, no frying etc – and quite tasty too.

Yes, I could have just blogged about how awesome all the food one makes is. But sharing a kitchen mishap with you guys did help one pick up some new tricks.

That’s not a bad thing.

So what have we learnt today? 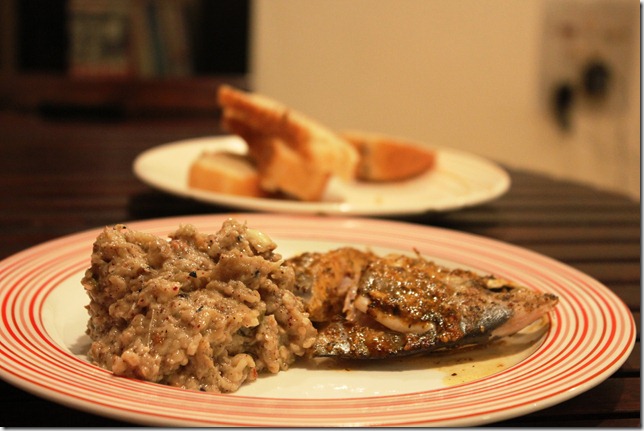 Brian Keith Carvalho said…
Have made the babaghanoush before. I reckon its also called 'moutabel', as thats how we order it in Oman and the UAE. But I use the blender approach for making it smooth enough for a dip. I prefer a combo between tahini and a little yoghurt for consistency.

kaniska said…
nice take on baba ghanoush. makes me feel like doing some. may be over the weekend. out of vegetables and groceries at home though. so shopping first.
17 January 2013 at 11:04

Kalyan Karmakar said…
Brian, I had heard of moutabel didn't realise its the same. Yogurt would be a good idea. I was tempted to crumble in some cheese. Mom said that in Iran they apparently used to break an egg on hot roasted aubergine

Anonymous said…
Since my Dad is here and because of his diabetes we are trying to do low Carb diets. This would be a great idea :) I think he is tired of the Baingan Bharta that we keep making for him :)
22 January 2013 at 23:17

Anonymous said…
Love the Mortar and Pestle idea...I think the coarse texture would go well on bread as well! Isn't it wonderful to see how a humble vegetable like aubergine or 'begun' as we Bongs call it (literally translating into 'bina koi gun' or without any benefit)is so popular in Indian, Arabic, Maghrebian, East-European and Mediterranean cuisines? the roasted version tops all and gorgeously mixes with onions, tomatoes, red peppers, garlic, olive oil, nuts to give us the likes of Baingan Bharta, Begun Pora, Chokha, Babaghanoush, Moutabel, Salata de vinete cu ceapa, Vinetta, Ajivar, Zacuscă, Ljutenica etc.!
25 January 2013 at 07:21

Kalyan Karmakar said…
It's amazing how food travels isn't it. Thanks for writing in. I tried oven roasting the begun, the pun had slipped my mind :), that didn't work. Was not soft enough and had to use blender apart mortar and pestle. Oven roasting was perfect though for m and p
25 January 2013 at 16:44