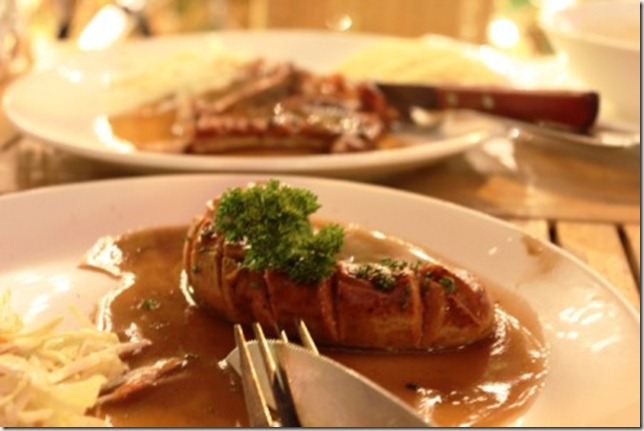 It’s a late December night in Mumbai. There is a slight nip in the air but not enough to warrant woollens. The scene is set in one of the alleys in Bandra. A boy and a girl are sitting in the courtyard in front of a small restaurant. There is another couple in the next table. Inside the restaurant are the kitchen staff and a table with guests. The street is empty otherwise. No cars passing by. No people walking by, even though just a few buildings separate the lane from the frenetic traffic of Hill Road. A girl walks in and joins the boy and girl sitting at the first table.

The guy: Ah you found the place finally

New girl: Yes. Quite a walk though. I am really hungry.

The guy: Bruce, can you take the order from our friend please

New girl: Anything in veg

Bruce (looking perplexed): But we don’t have much in veg. How about some chorize rice…I can make it with egg and choriz flavour

Bruce (thinks for a while): Fries….mash?

Puzzled silence sets in and then suddenly the guy in the next table, a food blogger, butts in with a bit of an impish smile: Why don’t you order from Shiv Sagar

Her friends burst out laughing: Yeah or Balaji….great idea…we can call for an idli for you

Well Bruce does refer to Imbiss, the new restaurant that he has set up in Bandra’s Waroda Road as a ‘meating point’. His bemusement understandable.

Imbiss is place that Bruce has set up with his relatives in Al Farms. Al Farms is the brand of cold cuts available in Mumbai which offer some of the best locally produced stuff that I have come across in meats. We’ve been buying these since more than a decade.

Imbiss is a little eatery which focuses on meat and just meat cooked in simple, old school, non foamed or ketchup bottle make upped, ‘continental food’…the recipe for most dishes are simple…red meat, pure meat…grilled, fried, roasted…served in ‘brown sauce’ and jus. Cooked in a little open kitchen with recipes built with the Al Farm guys. Apparently there are some sausages here which the Al Farm folks supply just to Imbiss and are not available in shops.

Imbiss is about 3 months old and I had passed it by while house hunting on the streets of Bandra sometime back. Then someone wrote to me on twitter to the effect ‘check out this new spare ribs place at Bazar road. I saw people eating there and they looked happy’. Then Sassy Fork told me about it and soon I saw loads of folks tweeting about Imbiss.

So a few days after Christmas, tired after a day of house shifting we decided to go and check out Imbiss. It was a day needed some good food for salvation.

I parked near A1 Bakery at Hill Road, and then, following directions, walked down Waroda Road past Spice Tree. It was past ten at night. The lane was empty. There was a mild chill in the air. Street dogs frolicking in the lights. And bungalows, so un-concrete jungle Mumbai-like, lining the walk…lit up with Christmas lights, stars, crosses and sheltering nativity tableaus. 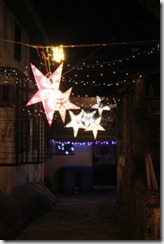 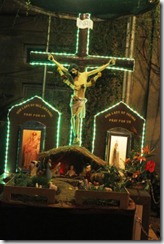 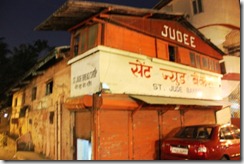 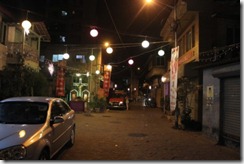 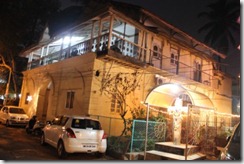 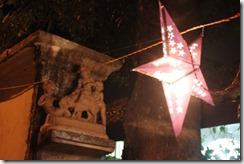 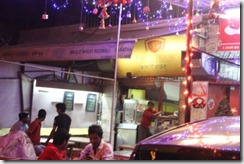 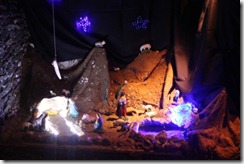 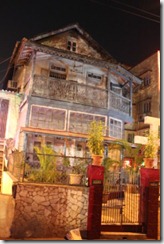 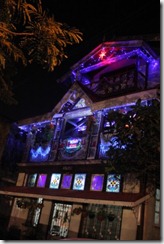 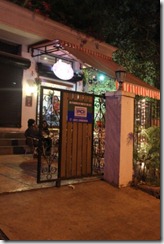 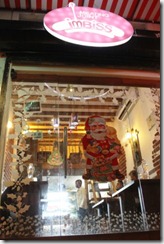 At the end of a longish and very pleasant walk we were at Imbiss. While there was seating inside, we took advantage of the rare pleasant weather and sat out. Yes, it could have been Baga with its gardens jewelled by fairy lights by our side.

Choosing from the encyclopaedia of meat-like menu was tough. 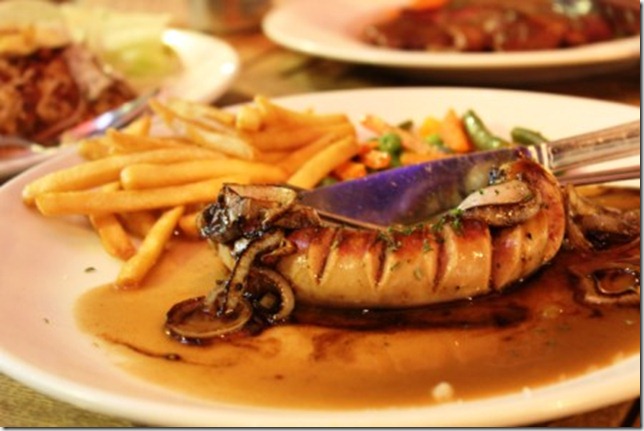 If the bratwurst smacked of raw passion then the smoked pork shoulder that we ordered was redolent of the grace and poetry of courtesans. Exquisite and delicate smoked tastes flowed through the bed of rich meat with bites of fat which made you a gurgle like a baby at the sight of its favourite rattle. 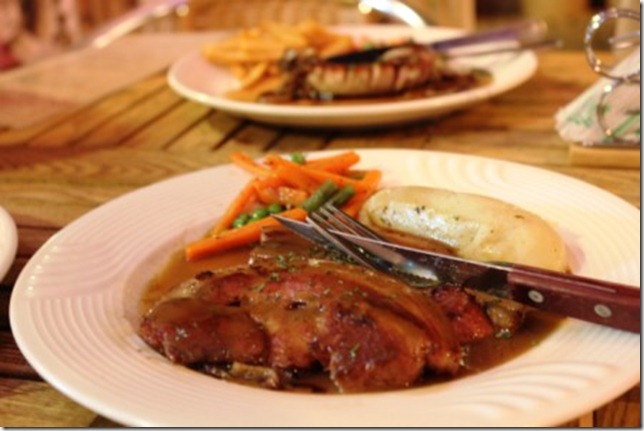 And then there was the Spanish chorizo rice which gave delight with its understated elegance…starch balanced by sharp piled protein and a nice fried egg to boot. The simple, uncomplicated pleasures of life. 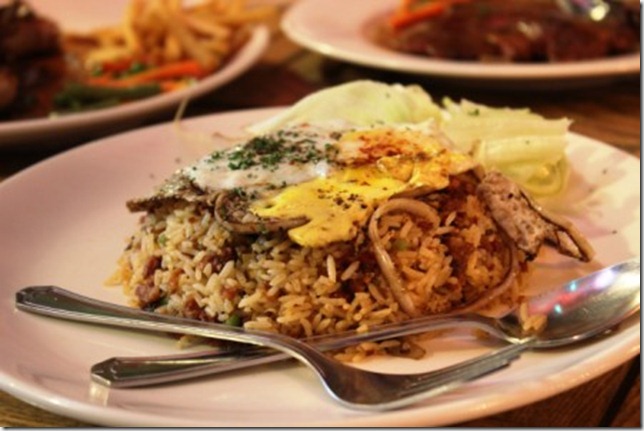 All of this and a diet cola for about 500 Rs or 10 USD. As I always say, you don’t have to pay a king’s ransom for the best food in this city.

A few days later we went back. This time I decided to skip the romance of the night and drive down the deserted streets of Waroda lane and park opposite Imbiss. Seven days of packing, shifting, unpacking, supervising can really wear you down.

We walked in later this time than last time. Past 11 pm. Last orders were being taken. Good old Bruce was himself having a burger from the restaurant. Always a good sign when a restaurant owner is not only manning the premises but eating there too.

K and I shared a beef goulash first. The nourishing warm broth sitting out on the pleasantly cool Mumbai night was just the rejuvenation one needed. The pieces of beef firm and packed with meaty flavours. A broth that poured the life back into you. 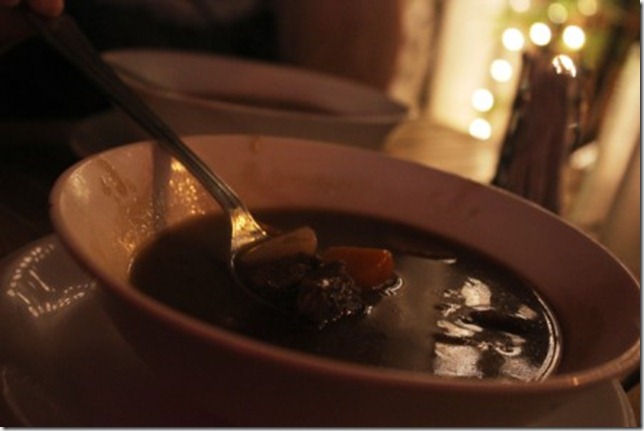 For our mains we chose a duck sausage which was an interesting cross between the juicy vibrancy of pork and the more subtle tastes of a chicken sausage. We had asked for ‘something different’ and Bruce’s recommendation fitted the bill. On request we got some baby fat soft bread buns. Our other order, the kassler, a roasted cut of bacon or cured and smoked pork chop is the stuff of dreams that you don’t want to wake up from. The good thing was here, no matter how much someone pinched you, you were indeed in meat heaven. 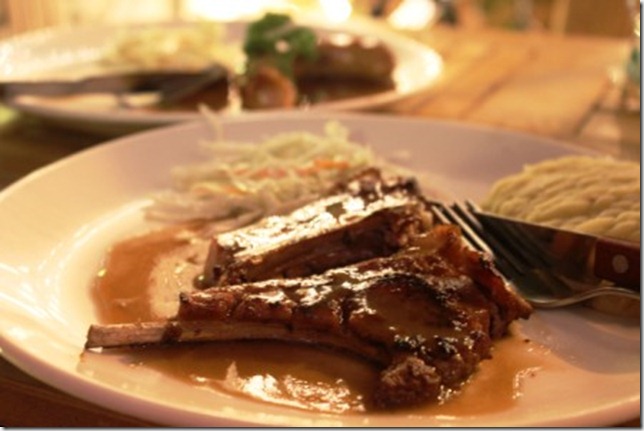 Imbiss has the odd chicken dish no doubt on its menu but can still claim to be the meat lover’s temple.

PS: 5 jan 2013 Went to Imbiss again last night. Had the barbeque baby ribs. If you know your food you won’t ask me to add ‘pork’ as a qualifier. The meat was silken. I also had the bacon and fried eggs with bacon oil. The bacon velvety and beautifully fried. K’s pork shoulder was a bit dry. When we told Bruce he immediately said that this could be possible. Apparently the cut was different and another customer had complaint too. Bruce immediately replaced it with a kassler which was pretty marvellous. I am talking of the meat as well as the gesture. By the way something for veggies, the garlic bread was really good and we called for a second plate. 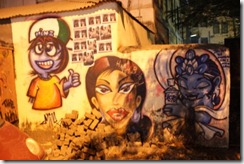 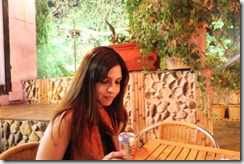 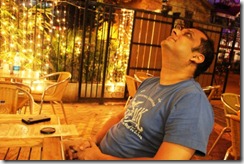 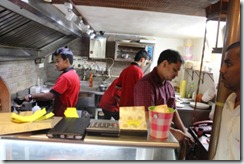 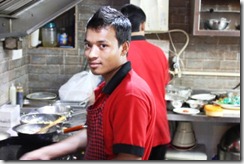 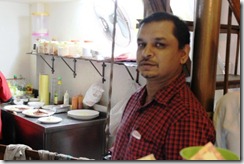 Shish said…
Hahahahaha! I KNEW THAT WAS YOU!
Well written as usual! Supremely tickled to see myself featured albeit as a junior artiste! ;-)
-First girl at the table.
3 January 2013 at 05:40

Home Cooked Oriya Food said…
So well written and love that comment from the reader above!
A meat lover's place - I would be at a loss too!
3 January 2013 at 06:35

Sassy Fork said…
Hahahahahaha.....so the vegetarian follows your blog and was first to comment!!
Loved the Goulash too.Yes,the place is oh so Goa!
I have bumped into people from Twitter whenever I have been there
3 January 2013 at 14:39

Pagli Chef said…
Papai is going to be so disappointed at not having been there when we were in India!
3 January 2013 at 18:19

Rhea Mitra Dalal said…
K went there yesterday and brought back a doggy bag for me. The Chorizo rice was quite good considering I was having it warmed up in the mw, the next day. I believe it will be worth the journey all the way to Bandra to have it fresh!
4 January 2013 at 17:39

Kalyan Karmakar said…
yes you must make the trip and the weather's perfect right now
8 January 2013 at 15:54

Delnavaz said…
Love the way you dig out these "meaty jewels" in the city..
Was in paradise eating the Barbeque ribs, Sausage platter and Chorizo rice..
15 February 2013 at 12:36

Kalyan Karmakar said…
hey thanks for writing...i owe this discovery myself to others :)

btw I as at your office when k was there but in another meeting...actually had chicken biryani in your canteen for lunch :)
16 February 2013 at 02:16

DelnavazM said…
Oh..Just missed out on an opportunity to meet you. Would love to catch up the next time you plan to have lunch in the canteen.
I'm sure without the potatoes the Biryani doesn't feel the same:)
17 February 2013 at 18:00