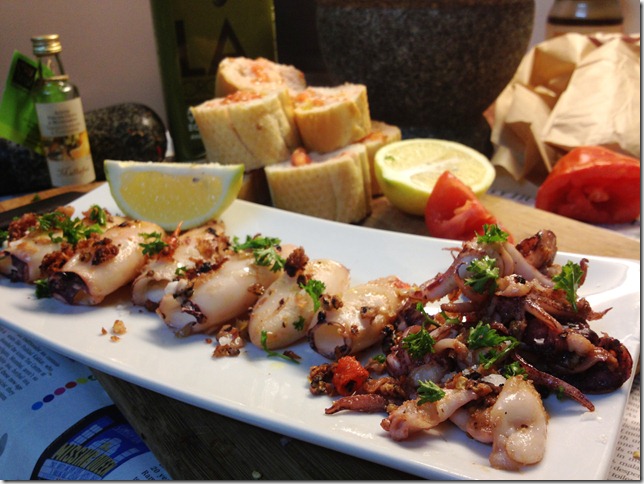 There are few things as satisfying as coming back from a lovely holiday and then recreating your taste memories from it in your kitchen.

This story starts at Mercada San Miguel in Madrid. Not really a ‘market’ as the concierge in our hotel, Catalonia Plaza Mayor (great place, especially if you get a room with a view, and great location too), told us. He explained that it was more a collection of small restaurants and shops selling food.

We walked in to Mercado San Miguel the next morning and my face broke into a huge grin.

A huge square with a shed covering it. Loads of neat stalls, each selling different things – seafood tapas – cured or frittered, shops just selling olives and ham, paella of course, then there was a stall selling mini hot dogs or bocadillos with some very evolved sausages, juices with fruits that packed so much flavour that you felt that you were in the Garden of Eden, a stall selling various types of croquettes, sherry bars, hot chocolate shops, coffee shops, chocolate, macaron and cupcake shops, heladerias or ice cream shops, mozzarella shops…true I have lost all the pictures that I took with the camera but you can figure out from what I just described as to why we decided to have lunch there the moment we stepped into the place.

It’s the sort of place that made you feel like a kid in a candy shop. Or like me in Mercada San Miguel.

My hunch when I saw the place was proved right. Everything that we ate there was memorable. The cured anchovy tapas, olives with anchovies, squid ink chorizo paella or arroz, the mini sausage hot dogs, the soft hearted cheesy ham croquette, the coffee the macarons and even the fresh fruit juice for God’s sake. Everything tasted really good. 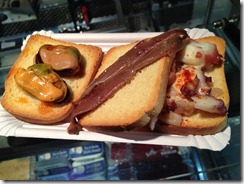 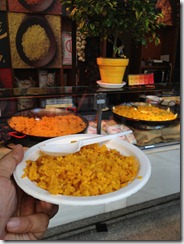 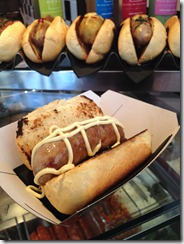 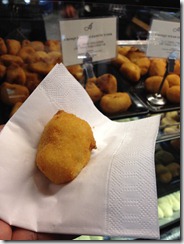 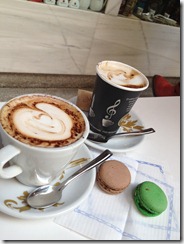 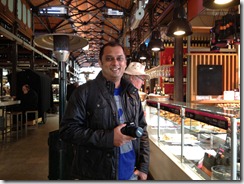 However, what stood out the most was the first dish that we tried…barbequed chiperones or small squids.
We had just entered the market and were wondering what to order when I noticed the first stall where a young lady was grilling what looked like squids, prawns and so on. About 5 euros a plate I think. We ordered a plate. Waited for about 5 minutes as she put it together on her flat barbeque like grill & added some rock salt and lime juice to it…not sure if she added some wine as well. 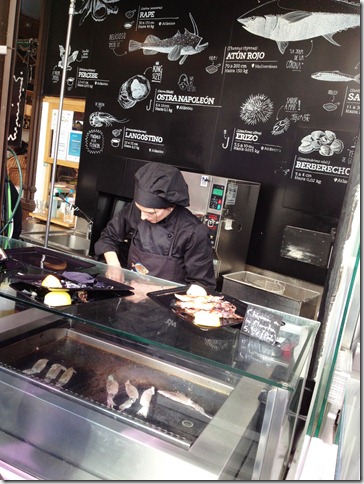 She then put it on a plastic plate and gave it to us. K and I stood in a corner and dug in to the treasures from the sea. The squids were cooked so perfectly that we cut them easily with just a plastic fork and knife. The squids spelt succulence. They oozed flavour.

We loved the squids so much that we ordered a second plate even though we had planned to go across the stalls and try many dishes in the market.

Cut to the second part of the story. This is set back in Mumbai. Starts at Khar Market where I had gone with Sue and Nathan to buy fish. My first interaction with  Sue & Nathan, before we knew each other, was on how to buy fish in Mumbai. Since then we had met, become friends, eaten out together, visited each other’s homes, but we hadn’t been to the fish market.

It was about time we went out for to the market. After a lovely, though noisy, thanks to parents telling their kids ‘the world is your drawing room, breakfast at Salt Water Café, we headed to Poonam and Sangeeta’s stall in the middle of the Khar fish market. 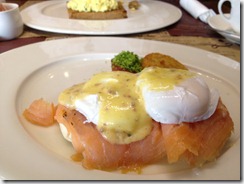 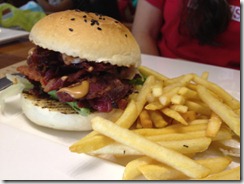 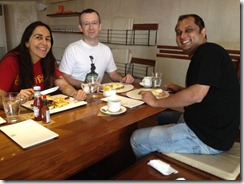 I picked a large rui, prawns, pomfret for home and some Bombay duck for the in laws when I saw squids at the shop. I asked Poonam to clean and pack 500 g (Rs 125) for me. Sue was quite excited to see them clean the squids as she was used to having to do this at home in the West. I was about to ask Poonam to chop the squids into rings. My plan was to make my usual butter pepper garlic squids when suddenly a vision of Mercada San Miguel flashed in front of me.

I stopped and told Poonam not to slice the squids. 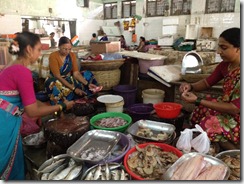 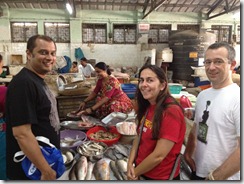 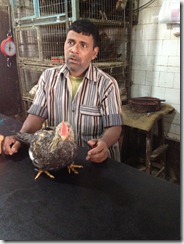 Now let’s move to the kitchen for the rest of the story. I had requested K to pick up a large lemon (Rs 50 each) from Lalu’s at Pali market for me. They had used that in Mercada San Miguel in the grills. K picked up a baguette from Candies for me. I had a plan for that too. 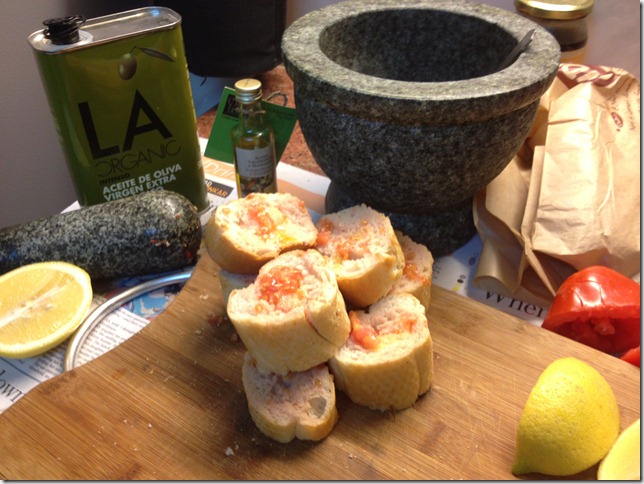 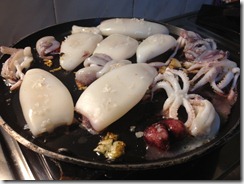 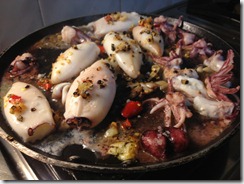 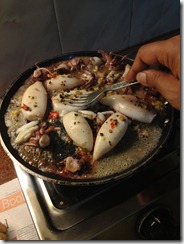 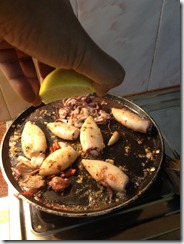 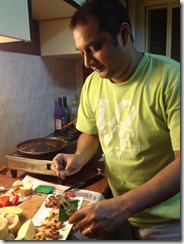 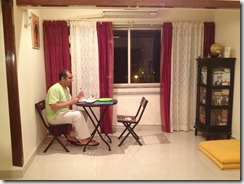 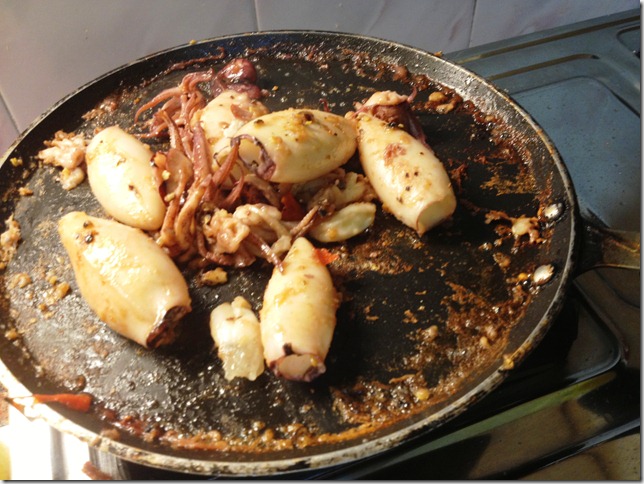 To eate with the squids I made some some pan con tomate or the tomato bread that they so love in Spain. It is very easy to make and I picked this method up from Alajandra in Espai Boisa.

Cut a tomato in to half. Rub it on a thick slice of bread so that a bit of the pulp comes on to the bread. Add some rock salt and extra virgin oil to it. I used the other little bottle of extra virgin olive oil that they gave us at Espai Boisa. This was chilli flavoured.That’s it.

You could also rub some garlic as Sergi Arola had showed us in his restaurant.

We sat down for dinner. I cut a squid with a knife and fork. It cut cleanly. The flavours …a mix of zest and chilli, rock salt and the very good quality olive oils…all had spread evenly through the squids.

There was a distinct taste of Mercado San Miguel in the dish. K said these were the best squids I had made till date. I agreed fully. I was very very happy with the results.

Yes, it had a been a good day in the kitchen. 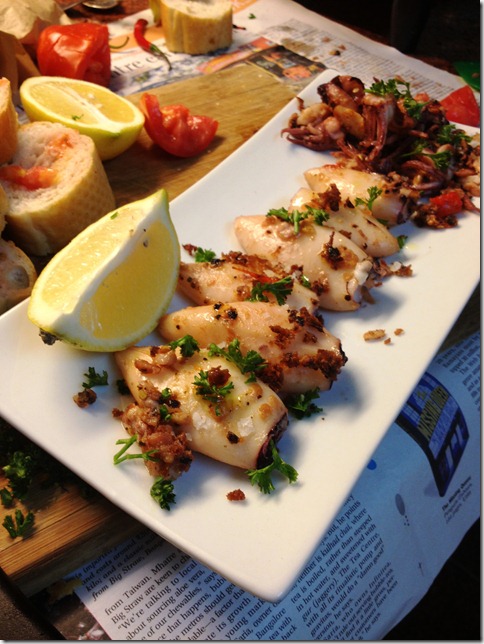 Rujuta said…
Yummy and lovely...
Thanks for sharing the recipe...Squids with tomato bread sounds very very tempting and must have tasted amazing...
27 February 2013 at 10:33

Kalyan Karmakar said…
love your willingness to try out new things...was chatting with a firend yesterday and we agreed that it's so important to have an open mind to learn new things...gain new experiences
27 February 2013 at 11:40

Unknown said…
Interesting looks yum!! The Squid looks so yummy and tasty...You can try this dish with mouth-watering German Sausages also :)
31 December 2013 at 13:37