This is not an anonymous review and the dinner was hosted by The Taj Land’s End. This was my first taste of Kashmiri cooking 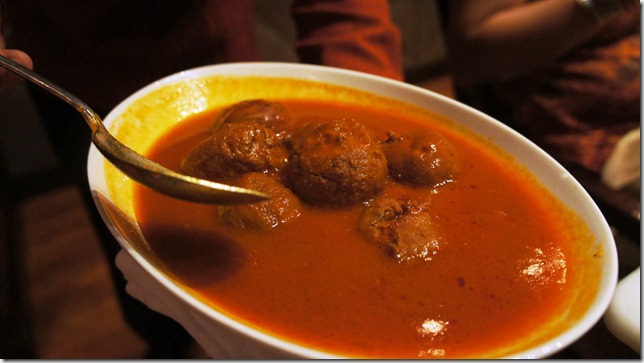 Today is the last day of the Wazwan festival at the Masala Bay in The Taj Land’s End.

It is a part of their ‘Windows of India’ programme initiated by the Kafka quoting, Kava quaffing, media shy Executive Chef of the Taj Land’s End, Anirudhya Roy.

Anirudhya decided to to ‘come out’ from the confines of his kitchen to host a few of us bloggers at a chef’s table at the Taj Land’s End a few evenings back. This was apparently one of the few times that this behind the scenes operator was interacting with the ‘media’. In today’s localised world of hospitality reporting, Bloggers and social media content generators are now included in media outreach plans. Chef later told us that he thought the evening would be ‘a pain’. Apparently we were able to change his mind or so he said.

Chef Roy didn’t subscribe to the chef at the front of house school that is so prevalent these days. In fact he took pains to make it clear, as he spoke to us, that he wasn’t the one who had put the dinner together. “I am here because I speak good English” he said with disarming Mahinder Singh Dhoni like non grandstanding honesty.

They had flown in two chefs from Kashmir who were the men behind the dinner. A dinner so exquisite that we gave a standing ovation at the end when Chef Roy got one of the chefs to meet us. 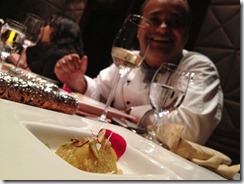 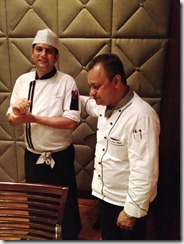 I rarely go to five stars to eat and that too for Indian food. If at all I pay and go to 5 stars, it is to try out cuisines that one doesn’t get exposed to otherwise here. Which is where The Windows of India programme caught my attention. They had earlier featured cuisines that included the Keralite Moplah and the Uttar Pradeshi Banarasi Satvik and after the Kashmiri Wazwan one are toying with North Eastern cuisines. None of these Indian regional cuisines are available in Mumbai but then Mumbai is a city which doesn’t have a Kohli restaurant that features the food of the local fisher folk. The modern fine dining food scene here unfortunately is more about Italian, French, Spanish, Far Eastern and not so much about richness and diversity of Indian food. There is more focus on discovering Indian cuisine in London than in Mumbai for sure.

In this context I found the Windows of India of the Taj to be an interesting concept. In this case it helped whet my curiosity about Wazwan food which was aroused by the last Rushdie book that I was able to finish reading, Shailmar The Clown. 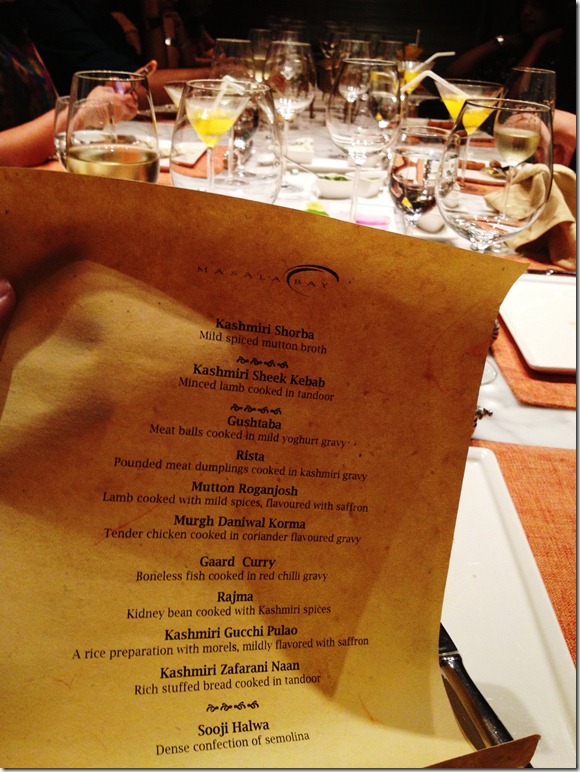 What we got to try at the Chef’s Table was a taste of all the dishes in the festival. For paying guests it is available as part of the a la carte menu at Masala Bay till this evening. 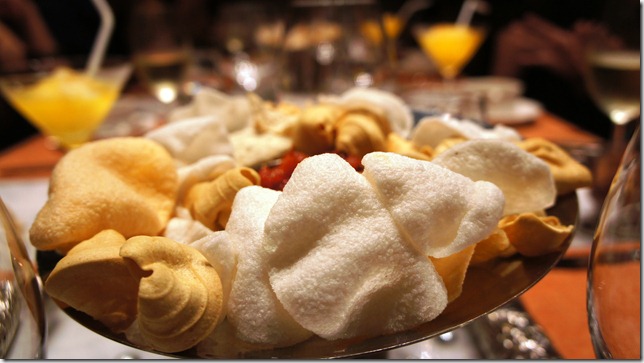 What stood out for me in the food was purity of the taste of the produce in some very complex preparations. I am a big believer these days in simplicity in cooking which allows the essence of the ingredients come out. The beauty of the Wazwan fare at the Taj lay in the fact that though the preparations were intricate and the ingredients manifold, there was a certain innocence and beauty that one associates with the valley which came through in the menu.

It was all about ‘respecting the produce’, whether it was in the robust flavours of lamb in the mild Kashmiri Shorba or the bewitching flavours of saffron in the juicy yet tight textured mutton sheekhs. 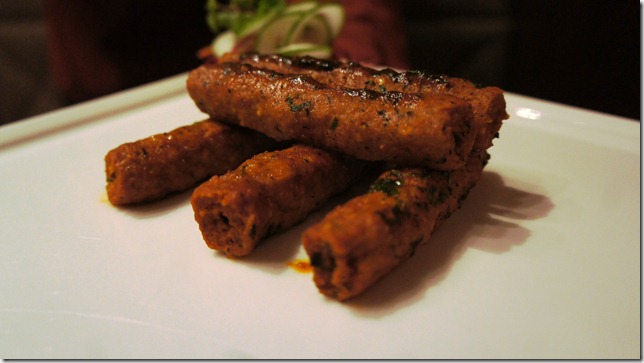 There were croquettes made with lotus stems brought in from the valley which had a woody texture and taste to them which was just so pure. 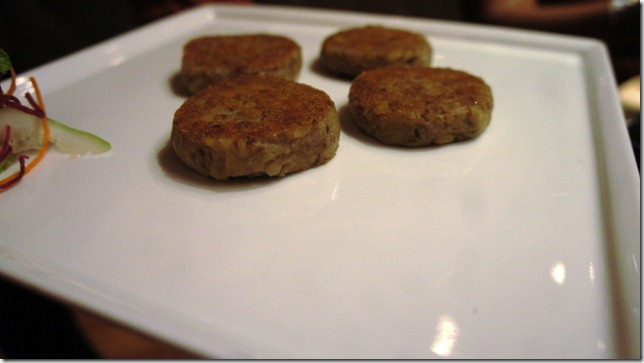 The chefs and the lotus stems are not the only thing that the Taj has flown in from the Kashmir Valley for the festival. Once every three days, chef Roy told me, they flow in the wood pounded meat for the luncheon meat textured meatball of Rista & Gustaba…names which sound straight out of Arabian Nights tales and stand for meatballs in a red chilli based sauce and a yogurt based tangy sauce. Both very different preparations and yet starting with a very similar meat base. The flavours of lamb quite dominant in both sauces. Then there was the ‘tandoori chicken’ equivalent of Kashmir, the much traumatised and bastardised ‘rogan josh’. The one at the Taj was a dictionary definition of ‘fall of the bone’. There was a rajma too, very common across North India, but the red beans here were slightly smaller and a lot fresher in taste.

I’ve had morel or guchhi biryani twice before and was completely unimpressed by those experiences. In both those places despite there being very famous Mumbai chefs in charge I was left wondering what these mushrooms added to the rice. The morel biryani in the Taj Masala Bay was a work of art with the flavours of finely chopped morels enshrouding the rice and gently kissing each grain of basmati. Chef explained that the doyens of Wazwan would actually store morels with rice before cooking so that the flavours would get intricately mixed. This apparently is not commercially viable anymore. 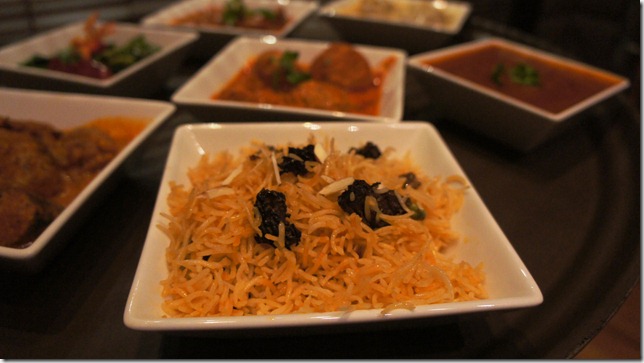 After the long grained rice in the guchhi pulao, the Chef insisted we try out the short grained rice which they had flown in from Kashmir and which is apparently hardly used there too. The rice looked sticky but was surprisingly light and bouncy and did combine beautifully with the sharp, crunchy textured Kashmiri river trout curry. 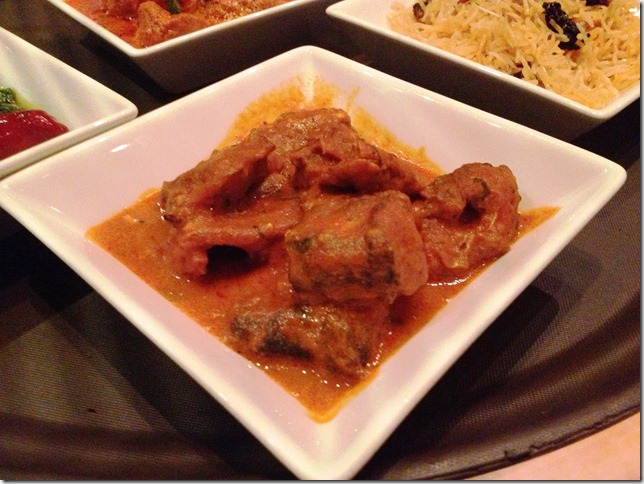 And there was a very soft, near Bengali shoojir payesh textured, suji halwa with desserts and some Kava to wash it down with.

If you though that was a lot of food, then you are right. It’s the sort of meal that left you feeling like Rocky at the end of a movie, victorious but exhausted. 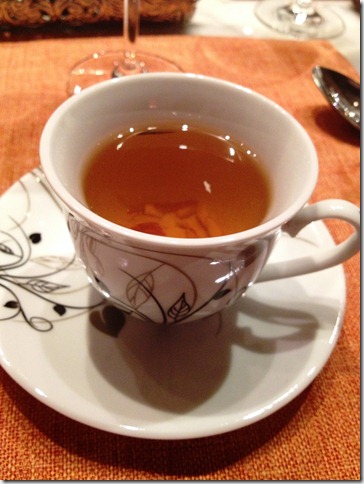 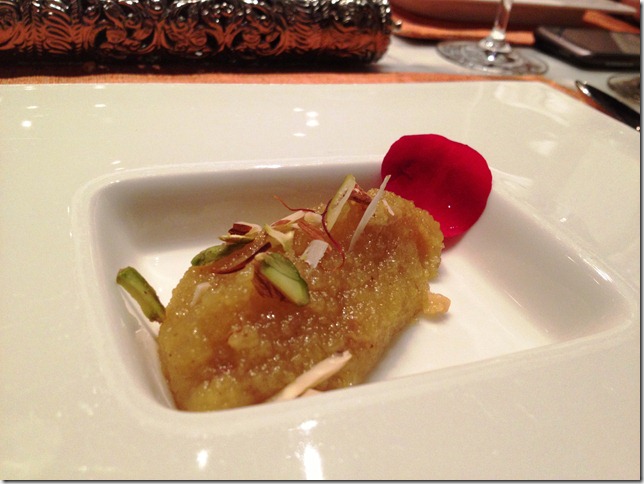 Apparently they have 36 or more courses in a Wazwan meal! 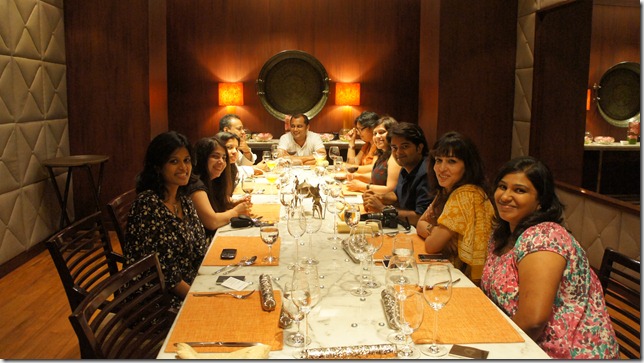 Shaivi said…
Looks yum! Reminds me of some amazing Kashmiri food I once had at Chor Bizarre, Delhi.
1 April 2013 at 00:06

Kalyan Karmakar said…
Thanks. The closest that I came to Kashmiri food was in Delhi Haat. They had a Wazwan festival going on when I went there. Unfortunately I had just had lunch
1 April 2013 at 10:53

Anurag Mehrotra said…
You look happy and satiated like a kashmiri godfather!
1 April 2013 at 12:13

Kalyan Karmakar said…
Kashmiri Godfather. Now that's a thought. I was just happy not to be given the bill specially since I was sitting at the head of the table :)
1 April 2013 at 12:57

uncannybal said…
Excellent ! How much do they normally charge for this meal?

Kalyan Karmakar said…
That unfortunately is a problem of an invite like this. I am not sure if the dishes are there now as the promo is over but perhaps you could call up the Taj. Sorry, couldn't be of help
2 April 2013 at 13:41

desh said…
Wazwan my friends have had in Kashmir was served on a single hot platter. People share and eat together. Don't know how close this was to that.

There was a kashmiri place which had opened couple of years back in verso a. Don't know if it still survives.
4 April 2013 at 00:29

Kalyan Karmakar said…
That sounds like a Bohri Thaal..no, this was served from serving dishes into individual plates
4 April 2013 at 14:04

Subhorup Dasgupta said…
The Wazwan is a true symbol of all that Kashmiri gentleness and love of life stands for. It is sad that the valley and its people are going through unnecessary strife. Karma of the land, as they say. I wrote a poem that plays on Kashmiri food (and design) to communicate the grief of Kashmir. Thought a link here would be of interest to those who enjoy this post. Zero Sum: A Song for Kashmir
5 April 2013 at 12:04

Anurag Mehrotra said…
Desh is correct, the dish is called a Tarami and same concept as Bohri thali. If I am not mistaken a Tarami is shared by 4 diners, while a Bohri thaal accommodates more (due to the size of the thaal).
7 April 2013 at 08:08