If you do meet Rashmi don't tell her that I called her the 'Grand dame' of restaurant reviewing in Mumbai. She prefers it if I call her 'Marilyn'. She is even willing to call me Marlon (Corleone ref) in return if I do that. Yes, neither of us belong to the 'Twilight' generation as you can figure out from our cinematic references. 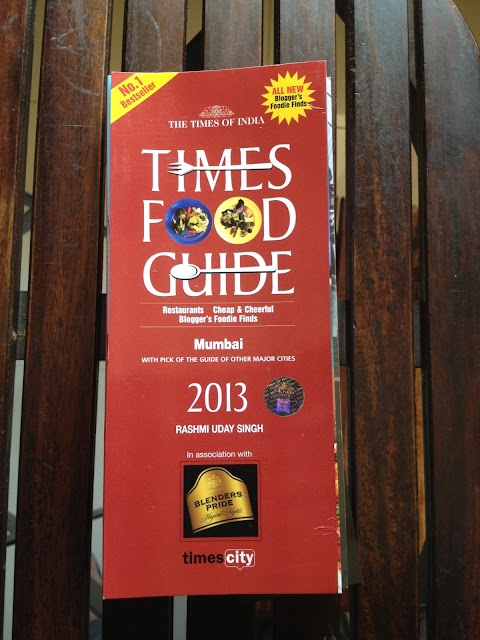 A year back my masi in law had gifted me The Times Food Guide, Mumbai, on my birthday.

A set of three books by Rashmi Uday Singh which would seem to be an obvious choice to give as a gift to someone know who loves food.

Little did I know that less than a year later I would suddenly receive a call from the grand dame of food writing in Mumbai, Rashmi Uday Singh, herself and that the next day we would go out eating together. Since then I have come to know Rashmi as one of the most positive and warmest and kindest human beings that I have come across.

Imagine the look of joy on my face couple of days back when K got me the latest Good Food Guide and I saw my name (albeit with an extra r) in the acknowledgments in Rashmi's 'My knights in shining armour and family section'. 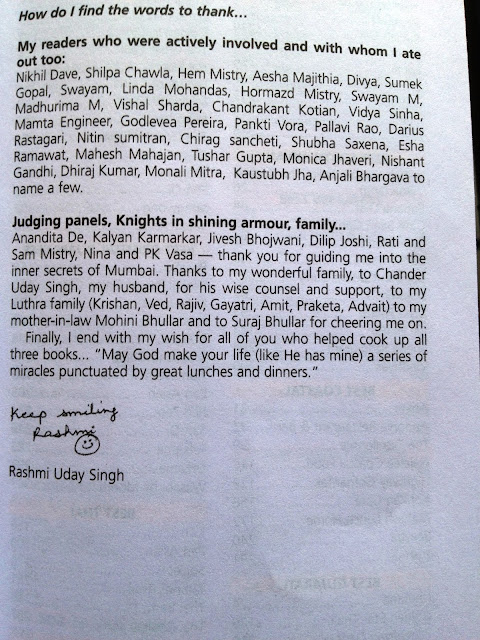 And a few pages later once again in the section on 'Bhojohori Manna'.

This is one lady in mass media who believes in crediting her sources. In fact if you read her column on Fridays in the Bombay Times, you will notice that she always writes about the folks she went to a place with and about what their reactions were. As she says, and as I have seen, Rashmi drops in unannounced in the places she covers and pays for the meals. 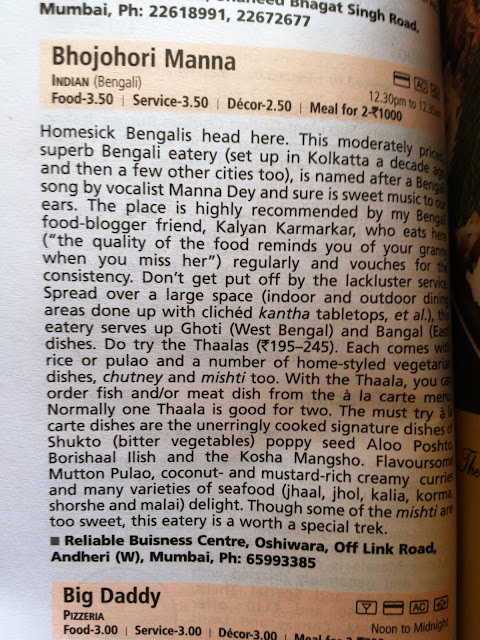 A few more pages down and one reaches the newly introduced section on 'Foodie Finds of Top Food Bloggers'.

The section is a very significant one as it is a recognition of the role of bloggers by Rashmi, one of the city's first mass media restaurant reviewers, and the Times Group, one of the India's largest mass media groups. 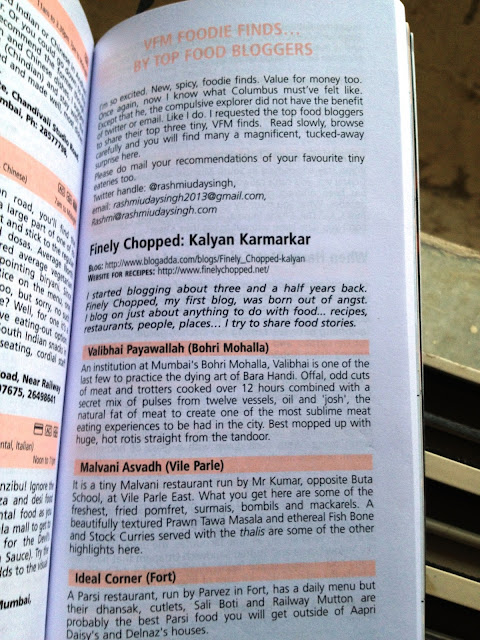 When I receive mails from PR folks where one is  part of a 'media list' I often question the use of the word 'media'.

I think what Rashmi and The Times have reminded us is that 'media' can take various shapes...mass as well as social...and that both can coexist.

Do pick copy of the guide and look up recos including those from Rushina Munshaw Ghildayal, Nikhil Merchant, Gaurav Jain, Adarsh Munjal, Snigha Manchanda Bilkola...some of the first set of Mumbai bloggers that one has known. Sunayan and food enthusiast Jarna Gandh whom one has met recently and many others and one whom I have not met yet including aapri Roxanne Bamboat or the 'Tiny Taster' whose earnestness and freshness makes her's one of my favourite blogs to follow.

As good old Rashmi says, 'May God make your life (like He has made mine) a series of miracles punctuated by great lunches and dinner'.

Thanks for the warm wishes and encouragement Marilyn,

You are the best. 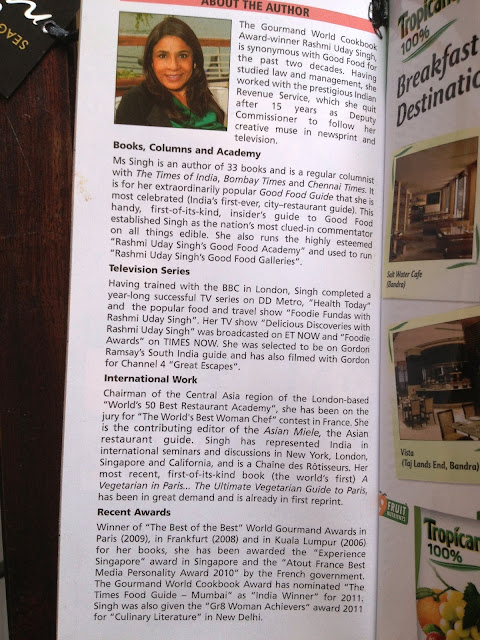 Gourmet Chef said…
Rashmi is indeed the Goddess of Restaurant reviewing especially in Aamchi Mumbai, predecessor ed by no one except the late Busybee (Behram Contractor) who had his own way of calling a spade a spade through his honest, simple n witty food columns in the 80 s & 90s.
As i see from the Times food guide cut outs, you have already made your presence felt in the big scene in a shot n sweet way. I sincerely hope that you would also be making it into their league in the near future. Kalyan, Please dont lose your originality & continue doing this noble work of spreading happiness in people s life through those yummy & finger licking food displayed in ur blogs attached by some wonderful photos which i rarely see these days in the so called umpteen food blogs/columns. Bravo....Viel Gluck....
5 March 2013 at 01:07

Sassy Fork said…
Rashmi's got so many people interested in good food with her column in Bombay Times.I like the fact that she writes about small places too with just as much enthusiasm.Congrats Kalyan!
5 March 2013 at 10:57

Kalyan Karmakar said…
Thank you so much. Comments like these are really fuel for a blogger. Yes, it's been an amazing ride. Had no idea of what could have happened when I started 5 years back. Will definitely continue to give the blog the best shot. Thanks for your feedback on the photos. Right now am camera-less unfortunately so it's the iPhone to the rescue...kalyan
5 March 2013 at 12:30

Kalyan Karmakar said…
was as excited to see your name in the book last year Kurush as I was this year. Thank you Dr Dalal
5 March 2013 at 20:10

Pinku said…
First of all Congrats...this is really something.

Secondly while its nice of you to say we should pick up a copy of the Times Guide...I hope you do understand that for many of us the finely chopped pages are just that...a lovely, personalized space to figure out worthy eating joints in Bombay. ;)

Kalyan Karmakar said…
tahnks so much Pinku and thanks for sticking on over all these years
6 March 2013 at 14:50

Unknown said…
Oh my gosh ! Thank you Kalyan for such a sweet mention :)I had the chance to finally meet Rashmi and I adore her! It's safe to say you and Rashmi are my fav foodies, and when I get this wonderful encouragement from my favourites it means more than you will ever know. Thank you :)
7 March 2013 at 21:01

Kalyan Karmakar said…
Pleasure's mine Tiny taster and thank YOU Roxanne...it's been such a pleasure to read your posts...thanks for taking the time and effort to write them for us...Kalyan
8 March 2013 at 00:50