Navroz …when food is at its most festive. Feat: Katy’s Kitchen, Zinobia Schroff, Le 15 Patisserie Bandra

On the one hand I tell folks that I am not a very ‘festive’ person, on the other hand I love festivals.

No, not the trappings, customs, rituals, decibels and camaraderie of festivals. I don’t relate to most of that. Festival food though, I love and there are very few that compare with the Parsis when it comes to festive food.

Yesterday, 21st March was Navroz, the spring festival of the middle east and I am still reeling, happily, from all the food. 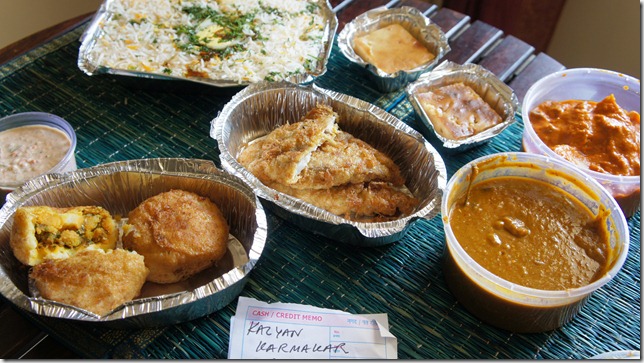 What could be lovelier than a gift of a special Navroz Bhonu sent by Rhea and Kurush Dalal who are carrying on the great work done by the late Katy Dalal. An amazing lady who can’t be better described than she is by her daughter in law, Rhea’s, loving words in this blog post.

We sat down for lunch and I could feel the love in every bite we took. Katy Maai up there would be so proud of what her son and daughter in law were up to. 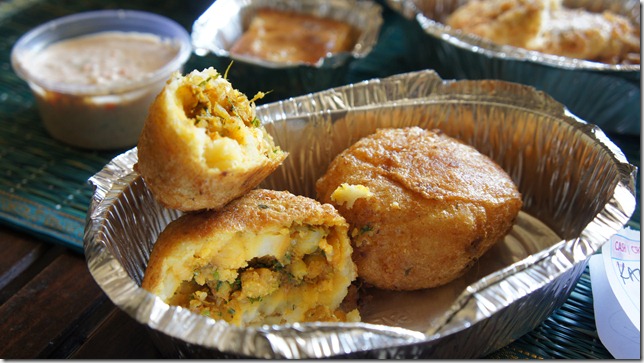 The prawn pattice full of juicy bites of shrimp enveloped in a well flavoured, soft as a baby’s cheek, masala potato mash. The fish fillet juicy and pairing well with the tartare sauce. The day before Kurush gleefully told me about the fish fillets he had got from the market. I got an inkling of what this means to Parsis when I described the bhonu to my mom in law who squealed in excitement, ‘there were two seafood dishes!!!!!!” 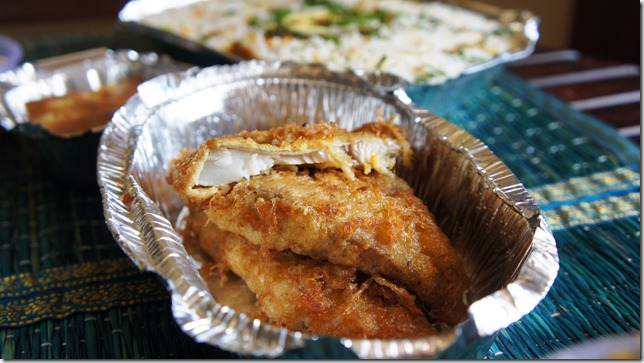 Then there was pissela badam ni gosht or succulent mutton cooked in a very majestic almond sauce. Parsis love dry fruits. The remains of their Persian DNA I guess. I remember having loads of pistas when we used to live in Iran. K’s Mamma was fond of dry fruits and used to have them even while clinging on to her last tooth. Don’t ask me how. I think they used to soak the dry fruits in milk and give them to her. On the other hand, if I give dry fruits to Didu, my Bengali grandmother, she stores it for times she would make payesh. Talking of the ladies in my life, K just loved the fried slices of potatoes in the curry. “Only Parsis add this” she exclaimed gleefully. Well, as Kurush told me later, this is his mother’s recipe. 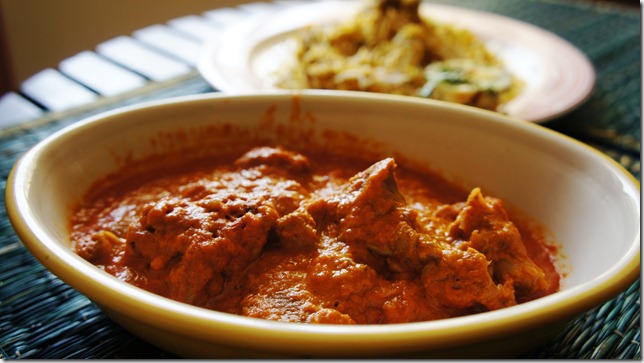 Then there was mutton pulao and masala daal. Time for me to show off my knowledge acquired by marrying into the community.

Two, you will never get dhaansaak in any auspicious occasion be it a new year, navroz, a lagan (wedding) or a Navjot (Parsi coming of age ceremony). That’s because dhansaak is associated with the post funeral rituals. The only ‘happy’ occasion on which dhansaak is served is any Sunday afternoon. Usually with chilled beer and followed with a nap.

I loved the flavours of the pulao that Kurush had sent, the firm grained rice and the masala kissed meat and of course the boiled egg. 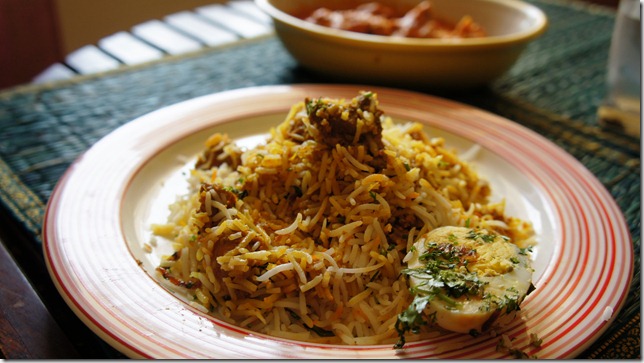 The thick masala daal, similar to the daal of dhansaak but sans meat, was robust, had a great body and within its thickness was the sharp interplay of intense flavours of methi and a residual kick of the heat chillies, Quite operatic. K mopped the daal up while I passed my erudite comments on the daal. 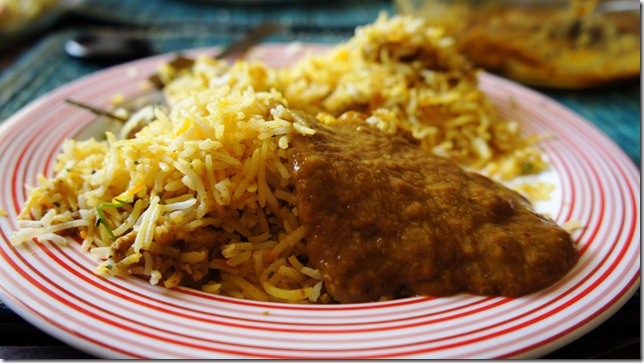 Then there was laganu custard but to know how that was, let’s cut to the evening.

The in laws had come over. A boisterous, festive meal done there was a happy well fed silence around the room. I suddenly remembered that I had saved some of the custard for my in laws and took the laganu custards out. 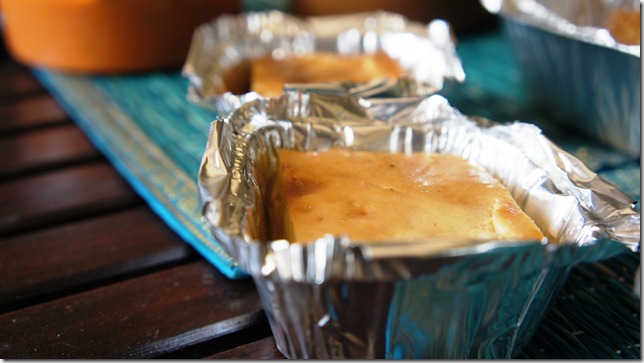 “This laganu custard, I like, this is real custard” said my father in law, a man of few words, normally happy solving his sudoku puzzles in a corner, till he comes across ice creams or laganu custard.

“You are carrying Katy Aunty’s tradition forward Kurush”, my mother in law told him when I phoned the big man to thank him at the end of what must have been a gruelling day for him.

He later told me that the entire community used to refer to the Late Dr Dalal as Katie Auntie. 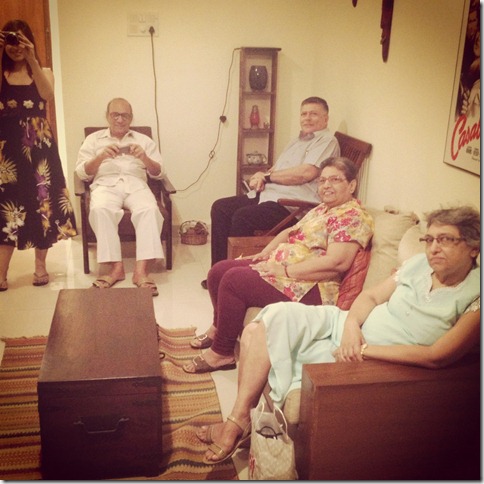 My mom in law had got us a bhonu (Parsi for ‘feast”) which she had ordered from Zinobia Schroff of Dadar Parsi Colony. 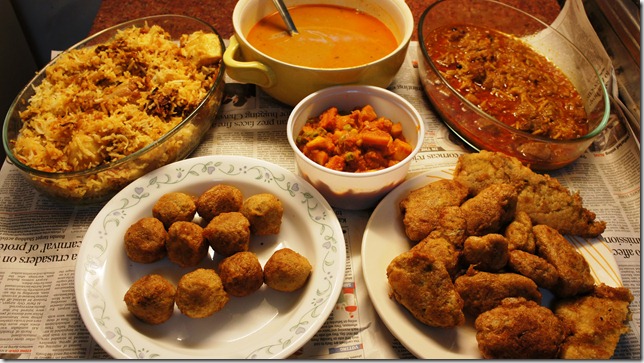 This Bhonu had exquisite bheja or goat brain cutlets which floated in your mouth thanks to their ethereal texture. Very intensely flavoured mutton kebabs. A home styled sali mutton with mutton that was very tender and a gravy which was thin, home styled and had the right. balance of sweet and salt. Wish the sali was given separately though and not in the gravy when packed as it got soggy.

There was also a raisin enrobed pulao and a thinner version of masala daal (each house has its own version) and a very home styled caramel custard meets creme brulee textured custard which I quite liked. 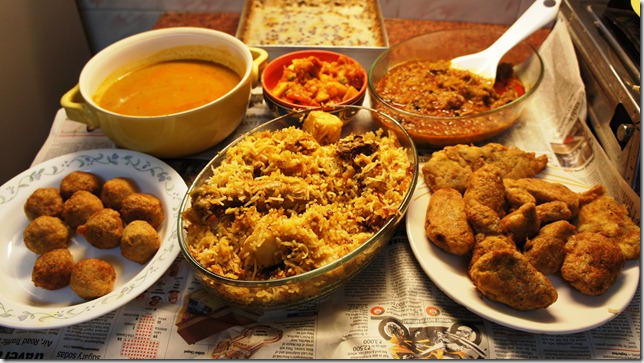 K and I gave each other got our gifts of new clothes and then we received another very special gift.

Pooja Dhingra of Le 15 Patisserie opened her first full fledged store. That too in Bandra. I often used to tell Pooja that she should open a store in Bandra.

She said she would and she did. She opened her store on Navroz in Bandra’s Ambedkar road, opposite Sweet Bengal & Brownie Point. K and I happily went to welcome her to the hood and had some hazelnut macarons and Oreo cookies. I finished the last macaron so you know whom to blame if you went and didn’t get any macarons.

We also bumped into Kajal, my neighbour from the Times Life spread from what seems like another life time.

Great to see Pooja grow over the years and she deserves every bit of of what she has achieved. Here’s wishing all the best to the young Macaron Queen of Mumbai. 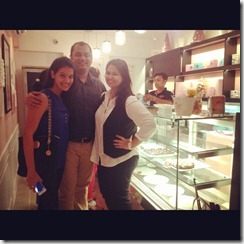 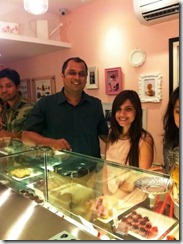 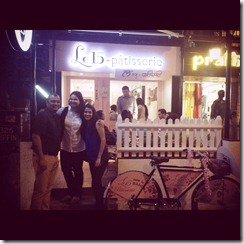 PS I bought a second hand lens for the the good old Sony Nex. These pics are largely from that. Kurush’s bhonu was a gift to us, I can vouch for the descriptions though. This is Kurush’s no is you ever want to order from him…9820136511. My MIl gave me Zinobia’s number. It is 9869914472

The Bride said…
Does Kurush take small orders too? My dad (bandra based) likes to occasionally order dhansak and those pattice(s?) looked yummy. I can pass him the contact.
22 March 2013 at 07:25

Anonymous said…
"This Bhonu had exquisite bheja or goat brain cutlets which floated in your mouth thanks to their ethereal texture"
"The prawn pattice full of juicy bites of shrimp enveloped in a well flavoured, soft as a baby’s cheek, masala potato mash. "

My stomach just did a double flip. Thanks for sharing. The post does a great job of making one appreciate..no, crave Parsi food. And thanks for the introduction to Zinobia Schroff Caterers. Will now have to start plotting an excuse to call them.

Anurag Mehrotra said…
Awesome, really enjoyed this one and I missing Parsi bhonu!
22 March 2013 at 10:24

Soumya said…
Minimum order with maximum taste! We still talk about the food you catered at my brother's and the fact that the minority vegetarians loved their special dishes too. -soumya
22 March 2013 at 16:00

Gourmet Chef said…
Has Kurush maintained the same quality & taste which Katie Aunty was following it to the T for so many years??
31 March 2013 at 22:30

Kalyan Karmakar said…
Well to be honest I have not had the fortune of having food from Katie Auntie's kitchen but the food in her son and daughter in law's is pretty good
1 April 2013 at 10:46

Kalyan Karmakar said…
Great to have finally met you Reshmy and tasted your amazing bakes too...hopefully will be able to introduce you to more Parsi delights soon
1 April 2013 at 10:49