Of Bandra Burgers & some hands on Mumbai restaurateurs

The other day Sue, Nathan and I were at Salt Water Cafe, one of my favourite delis around Bandra, for breakfast.

I had a delectable eggs benedict with smoked salmon but what caught my eyes was the bacon burger on our table. Turned out that I was at Salt Water Cafe the next evening and I straight away ordered the bacon burger to go with my sangria. The burger looked as raunchy it did the previous day. 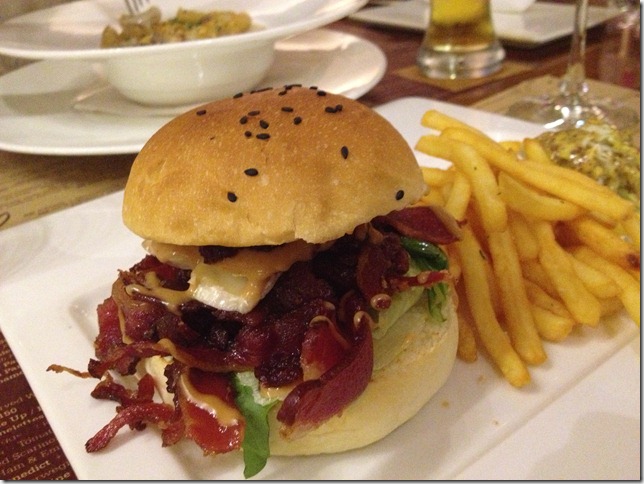 While the bacon burger was full of promise, it had a basic problem. The bacon was fried too crisp. For the burger to live up to its potential I feel that the bacon needed to be fried a bit less so that the its inherent juicy, fattiness could come into play. Perhaps I should have ordered the Asian flavoured pulled pork burger at SWC which I am quite fond of.

A few days later we went to Indigo Deli in Bandra in the evening. It’s pretty hard to get a table there so evening’s a good idea. The exhaust was getting fixed though and the place was hot and smoky. We changed three tables looking for respite. A bit bugging when you pay such high prices.

Thankfully though, the product justified the price. There was a decaf cappuccino with spunk (could more cafes stock decaf in this city of insomniacs?) and a rather phenomenal tenderloin burger. 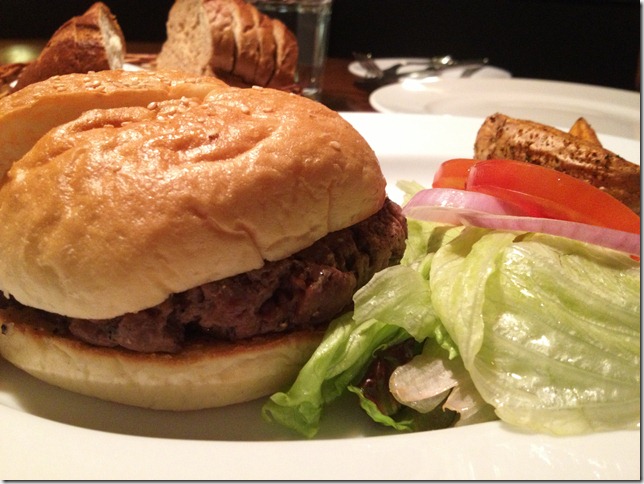 We said ‘medium rare’ when asked how we wanted our meat. Bourdain wouldn’t have us do otherwise.

The meat turned out to be delightfully pink inside and everything was just right…including the bun which didn’t crumple. It’s so easy for burgers to turn messy. No such problems here at Indigo Deli. A dialectic mix of finesse and robustness on the plate and at Rs 400 plus (8 USD) fairly gourmet. K and I shared the burger. I don’t think I would be able to handle the whole burger. That would be a meat overdose that would kill the enjoyment in my books. Thanks to our recent Spain trip I have gone the tapas way I think when it comes to portions. 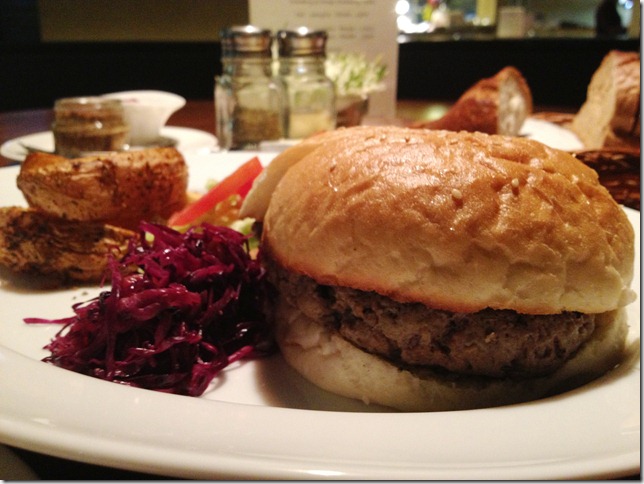 Talking of burgers, our love for the beef burger at Gostana has become even stronger. They make steamed beef burger patties here. Purists might question the moistness of the beef mince and point out that it’s not really a fried or seared patty. No, this is not your Mac Burger stuff…but the intensity of flavours with a hit of caramelised onions & chilli adding a faint Indian touch…no  garam masala though in case you were worried…and the palate enchanting steamed beef mince gives us lots and lots of pleasure. 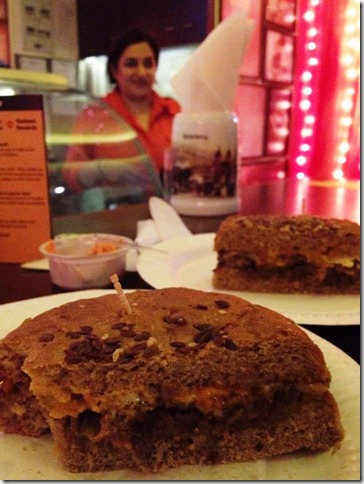 The one thing that connects Salt Water Cafe, Indigo Deli and Gostana is the temperament of the folks behind them. I have often said that owner driven places are what turn me on versus faceless chains.

Riyaz Amlani, is the man behind the Impressario group which includes Salt Water Cafe. Each of his restaurants have a distinct character to it. Some of our other favs from his chain are Mocho Mojo at Bandra for breakfast, The Tasting Room & Smoke House Deli. I have not met Riyaz yet but I did tweet to him about bacon. He immediately mailed back to me, assured me that he would look into and then folks from the restaurant called me up to. Great to see the owner and the folks who run the restaurant being so hands on and receptive to feedback. Specially since they run places which you like going back to. I guess this owner involvement explains why one keeps going back. Riaz is not a chef but I am told that he is pretty hands on when it comes to the running of his restaurants. ‘Hand crafted restaurants’ I is apparently his motto and it shows.

Ditto with Mumbai legend Chef Rahul Akerkar who owns the group that runs Indigo Deli. I’ve met him at a couple of restaurant events and he turned out to be a great guy to talk to and fairly approachable despite his celebrity status. I dm’d him on twitter about the exhaust fan when we were boiling at Indigo Deli the other other day and he and his team were on the ball and towards the end things became better.

Things go wrong. That’s a fact of life. How you address them is what matters. And these two gentlemen seem to be on top of their game.

Far away from these celeb restaurateur and chefs, are Arpana and Chef L who run Gostana. A tiny restaurant today in comparison to Riyaz’s and Rahul’s empires but definitely a very happy place with a great future. Arpana is almost always there when you step into Gostana and she and Chef L constantly take feedback on their products, new and existing. The results show in both what they serve as well as in the loyalty of their clientele.

So there you have …Riyaz, Rahul, Arpana & Chef L…four restaurateurs of very different skills and scale…united by their very hands on approach to their restaurants.

Talking of chefs who are hands on, Chef Jehangir Mehta from NYC was in town recently. He did a pop up restaurant in The Tasting Room and Riyaz invited us to it.

Do check out the very pretty, Royal Palais worthy, crockery from Good Earth that the served the food on and the newspaper turned table mats 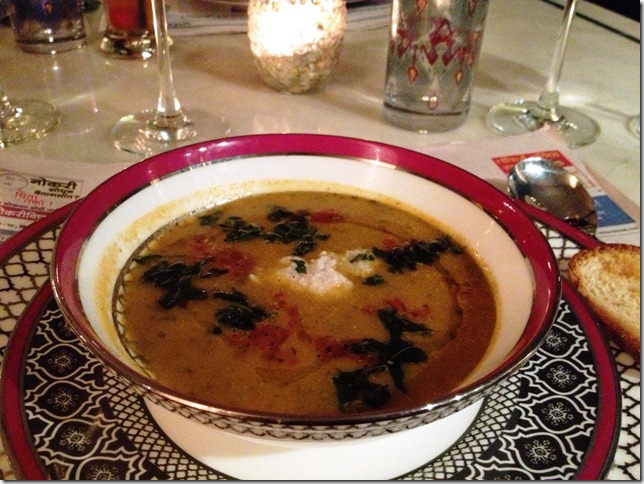 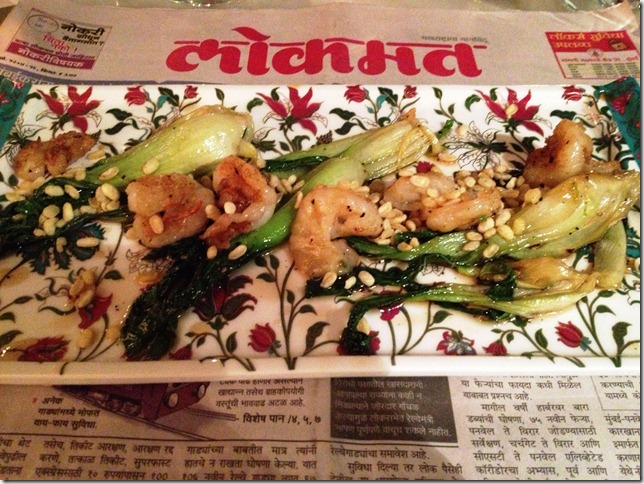 Then there was my favourite that night of the slightly gamey duck meat which combined celestially with some intense goat cheese & meaty porcini. This was followed by K’s fav of the chocolate creme pot which had a contrast of salted popcorn which worked well for me. 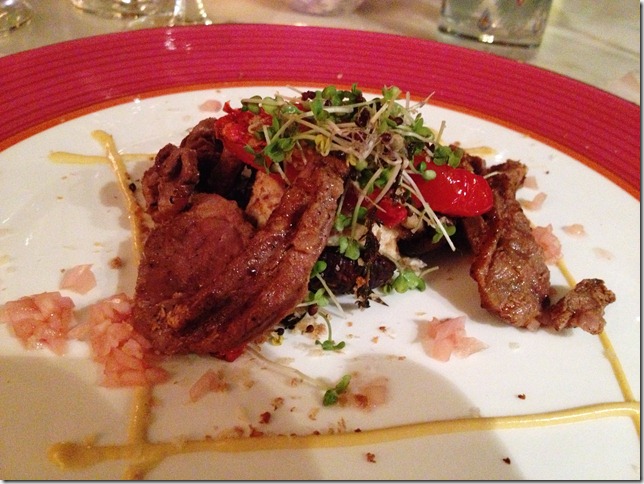 What struck me about Jehangir Mehta was that he was on his feet the entire time that we were there, plating and checking each dish that went out and later chatting with guests who wanted to talk to him in so disarming a manner that you would feel that you were chatting about bikes with one of the young Parsis in Navroze Baug and not with a much lauded New York restaurateur. No wonder Simon Majumdar commented on my facebook pic with Mehta that he found Jehangir to be  very ‘genuine’ when they met on the sets of the Next Iron Chef. 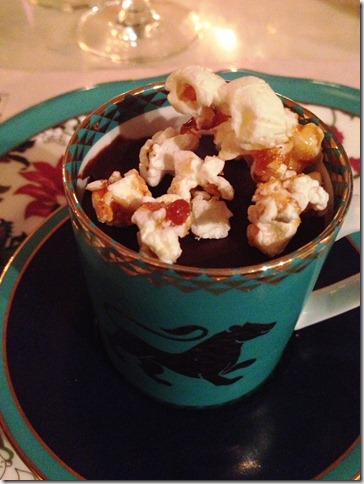 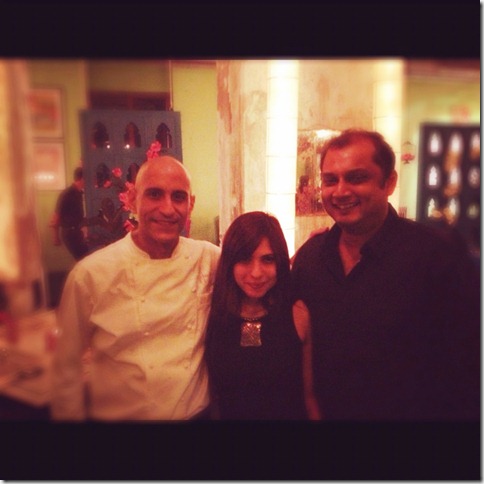 Since I have rambled into restaurateurs from burgers then do check up the Mumbai Mirror article on 5h March on chefs and how they balance out all the tasting that the ‘poor souls’ needs to do. One of the folks featured is Pooja Dhingra who sent us a box of the Le 15 Patisserie tarts, cookies and macarons yesterday for us to share her ‘load’ and taste and give feedback. And yes, she is another restaurateur whose hard work and involvement shows in the quality of what comes out of her bakery. 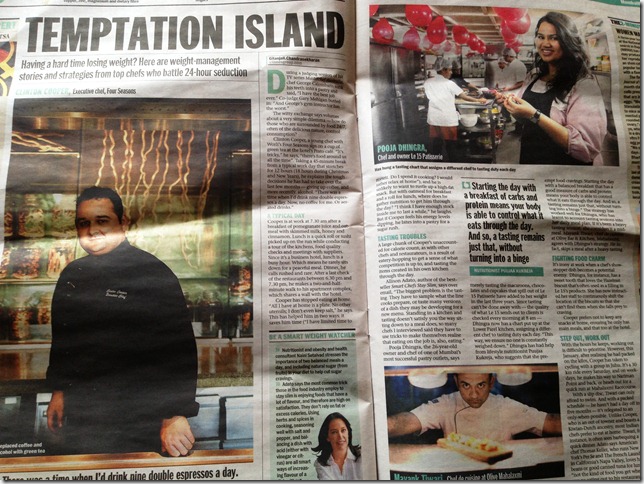 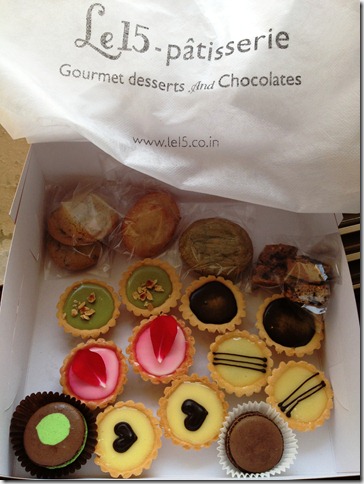 Yes, I do love chefs and restaurateurs. In fact I don’t know if this makes sense but I like their stories possibly even more than what they serve on a plate.

After all what’s a good meal without a good yarn to go with it?

Gobri said…
Talking of burgers, when you are in KL next, you should try MyBurgerLab. They use charcoal burgers, juicy meats, excellent sauces accompanied by lovely fries.
http://eatdrinkkl.blogspot.com/2012/07/myburgerlab-sea-park.html
6 March 2013 at 16:32