A Dollop of Sunshine…Between Breads, Bandra 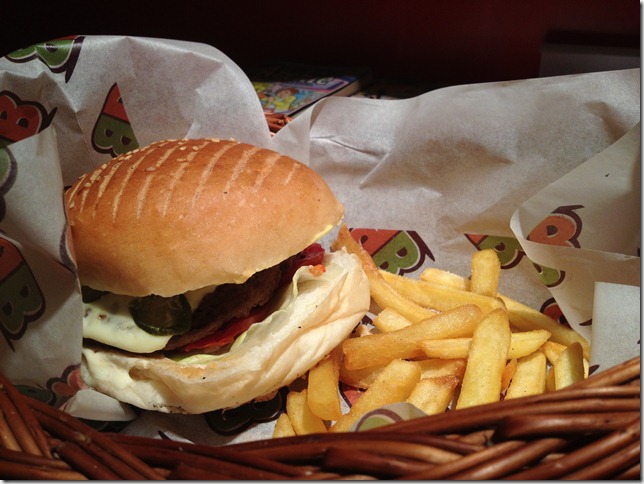 I must tell you about Between Breads, the new place we just went to, in Bandra.

It’s near 16th Road. In between Khane Khas and Hawaiian Shack. Kurush went there and went ballistic with his praise and Kurush knows his meat. Like Imbiss, a few months back, Between Breads too has generated a positive buzz on twitter.

We went to Between Breads at about 11 pm on Friday night but they were already sold out. Landed up there this evening around 8.30 pm. A last minute decision while out for burgers. One of those unplanned moments that define the history of mankind. Or fix a desultory evening at least.

Between Breads is a small place with about 10 bucket bar stools. The look, a bit of a throwback to Pop Tate’s, a point highlighted by the Archies Digests strewn on the tables. The place lit well enough for good iPhone pics.

Two of the three friends who started the place were around just as they were when went to BB the previous night. They were taking the orders, clearing the tables. Always a good sign. Nice to see small places started by young, first gen restaurateurs, that embody the spirit of the proprietor run eating places of old Mumbai, coming up in the suburbs too. I was told that the mood that they were trying to get in the Between Breads was that of a simple, casual fast food joint that was, in their opinion, missing in Bandra. Well, they do serve stuff that give unabashed pleasure here…no lean steamed meat, multigrain breads, or protein wheys here. Bandra has plenty of those. Like Imbiss, Between Breads is about eating for joy. It is not about the Protestant Ethic that Max Weber spoke of. This is the closest to spring break that food can get. In fact one of the owners told me that they plan to serve the sort of food you see in US based fast food programmes that are aired on TLC.

Hopefully with Indian portions though as some of those American servings on TLCs gross me out. In my book, it should be ‘food for man’ and not ‘man versus food’.

I wanted to go for a milk shake but K looked sternly at me so we settled for a lemonade based ice tea that they have. Pretty refreshing on a grimy evening.

We zeroed in on the beef cheese burger and requested them to cut it into half. We did plan to have dinner later.

The beef patty is well done and you cannot ask for medium rare here. That said, the patty was moist, pink, packed with juice, seductively tasty to a point which breached public propriety and all dictums of middle class morality. Served with crisp, crunchy fries.

The food is designed by a chef I am told who drops in occasionally with the regular kitchen cooks keeping things going otherwise. Well, the man had done a good job as we found out from the food. 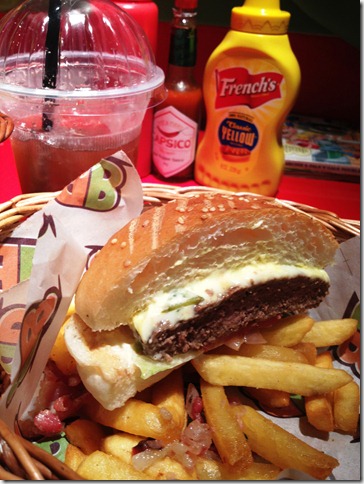 Each table had ketchup, mustard, relish & thoughtfully, a hand cleanser. You didn’t need any of the sauces though as the meat, mayo, pickle and gouda in the burger came together to give a very complete taste experience. Reminded me a bit of the Meat & Wine Company in Sydney where I had ordered a cheese dip to go with my steak and later realised that I didn’t need the dip.

The only thing I used from the table was the hand cleanser at the end, and that too barely, as the burger wasn’t really messy. In fact we were so engrossed in the food that I didn’t even look at the Archies Digests.

Oh yes, we had the bacon fries as well. Bits of plump, luscious, very good quality bacon strewn in the fries. The smoked flavour of the bacon soaked into the fries. A dish so perfect that K told me that I should not even think of instagramming the dish. 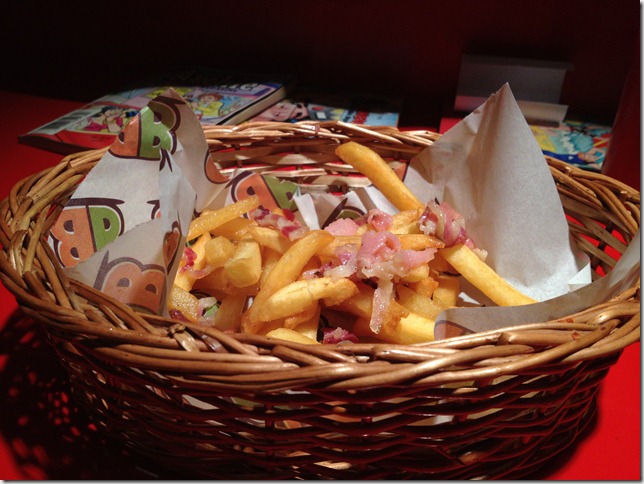 The burger was good no doubt, but the bacon fries were evil.

Between Breads is the sort of place that packs in a dollop of full fat sunshine in your plate.

If you are the sort that worries about calories, cholesterol and kilograms while eating then you might want to leave the seats at Between Breads  for those of us who simply like to eat. 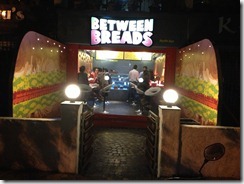 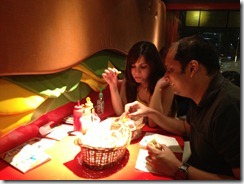 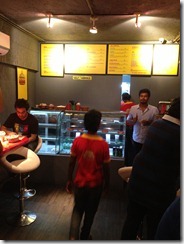 Unknown said…
oh you should have tried the milkshake..specially the banana coffee shake..i tried it and wrote about...evil like you said!!
9 April 2013 at 23:33

Ravi syal said…
am glad you guys like my food ....yes i am the chef u mentioned drops in occasionally ...i am actually their consultant...and the guy who made the whole menu.......and i do def drop in more than occasionally....cheers....thks for the appreciation
20 April 2013 at 23:47

~j~ said…
Visited BB last week. Loved everything we tried (except the coffee-banana milkshake, but then I'm not a milkshake person at all). One of the co-owners happens to be an ex-colleague. I was quite impressed!
21 May 2013 at 11:37