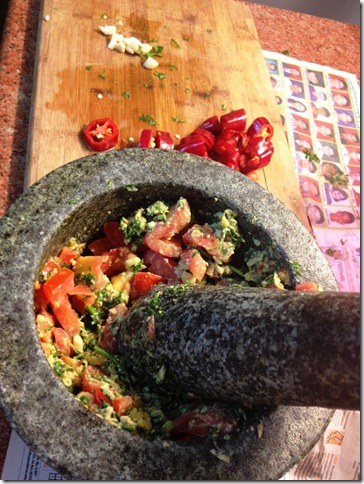 They say that necessity is the mother of invention and, as I found out, there is no better time than a Friday evening with friends to test out an old saying.

I had just come back home from a customised & exclusive (yes, you can get those too) Finely Chopped Fort Walk with Anita Breland & Tom Fakler of Anita’s Feast, Chef Joel D’Souza & Baking Sorceress Reshmy on Friday evening when some friends of ours dropped home after ages. Dhruti and Kaushik who had brought a shirt they had got specially Tailored ® for me.  Dhruti, a convert to non vegetarianism through marriage, was reminiscing about the veg Thai curry I had made when she had come over last. She said, “I hope you cook for us today”. 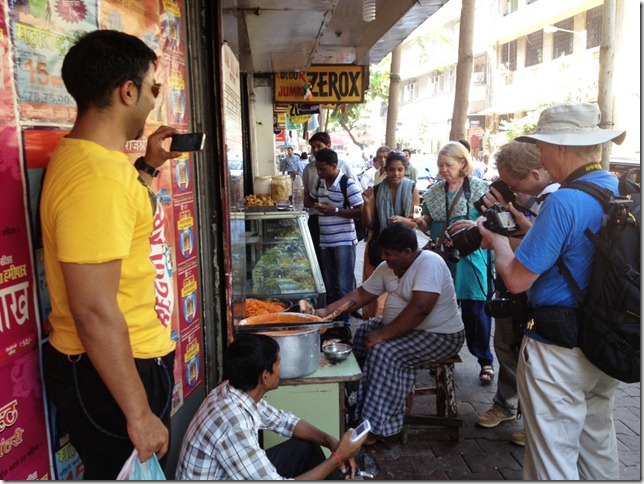 Well, few things charge me up at the end of a tiring day as the idea of cooking for people so i readily shook my weariness away and entered the kitchen. We had another friend, Harshad, dropping by who had converted to vegetarianism so I knew that I had a challenging brief for the night. While bacon, pork belly, mutton and prawns would work for our usual guests, I had to think green this time.

I was about to order some vegetables from the market and checked with D, “do you eat mushrooms?”…”no”…”do you eat baigan?”….”no”. Much later I figured out chicken would work for her.

So this is what I cooked up. Thought I will share the recipes if you wanted ideas for vegetarian dishes that are quick to put together.

Pasta in Catalan Romesco sauce (for 4-5) 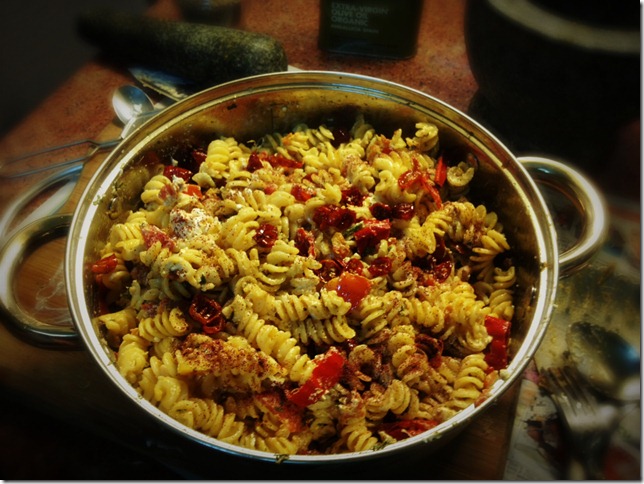 Now I had already called for some brinjal before Dhruti said no. I was planning to call for portabella too but by then I knew she was not into mushrooms. Vegetarians, even quasi ones, can be picky. 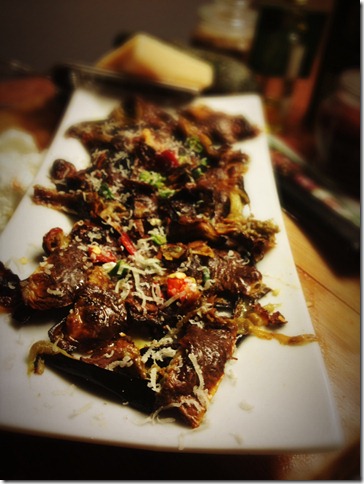 In case you are regular reader and are worried, don’t be. I added some jamon to the pasta of  us non vegetarians 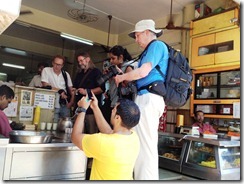 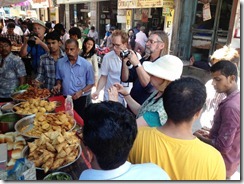 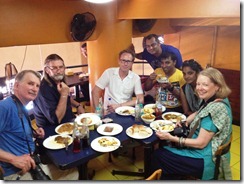 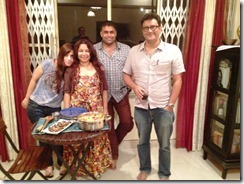 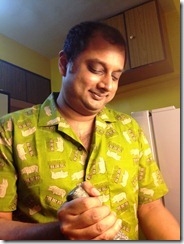 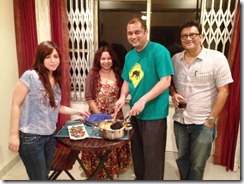 Anonymous said…
for the grilled eggplant, if you stick bits of garlic into it, and even some herbs, it will perfume the flesh.

if you don't have too much garlic just rubbing it will do.

I would also season it - salt and pepper - before baking.

Kalyan Karmakar said…
Will try this out but won't the garlic flavor be too strong for thin slices? Perhaps just rubbing it will do. I didn't season as I used cheese and the slices were thin
8 April 2013 at 12:10

kaniska said…
love the picture of your going at the mortar and pestle. you look happiest. keep smiling.
8 April 2013 at 13:32

Anonymous said…
small pieces, say a cut up a clove into 5/6 pieces.

cheese is fine, but i love to surprise people with the eggplant flesh scooped out, then ask well what do you think, their response "that's pretty good what is it", and I say "baingan" the look on the faces ha ha

IshitaUnblogged said…
For once your Mortar and Pestle shot looked like the one that I've just used in Thailand to make the Red Thai Curry. Current food trend discourages heating up EVOO - any thoughts on that? Both the dishes look fabulous!
16 April 2013 at 23:43

Kalyan Karmakar said…
In fact I bought this after my cooking class in chiang mai :)

I asked about the EVOO thing in Spain. They said they EVOO to cook as they cook on a low flame. I am not an expert of course and even I used to avoid using EVOO before this
17 April 2013 at 11:44