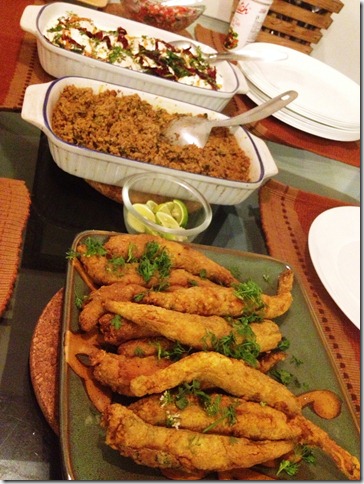 This post is about a dinner at a friend’s place

Last night I realised that there is a lot that I am yet to discover about Indian food. A realisation that made me so happy.

A few days back fellow ex-Bansdroni boy with Borishal roots, financial journo and food friend, Arijit Barman, and I chatted about how the Bengali palate has a greater natural affinity to Oriental cuisines than other Indian cuisines as our cooking philosophy is more understated and demure than many of the more robust and fiery ones of the North or South India. Keralite, with its avials and ishtews, being an exception. Whether rajma chawal or alu posto daal bhaat is your comfort food depends entirely on the social milieu in which you were raised we concluded.

Yes, we’d had a couple of beers at the Gulab Gang Wrap party and our dinner chat at Bong Bong post that was getting a bit quintessentially intellectual or ‘aatel’. * Last night’s dinner showed me that there is a lot more to Indian food than we think of. Bohri and Khoja cooking for example.

We had gone over to Anil and Nooresha’s for dinner. Some of you might know Anil Kably as part of the Bagel Shop, and erstwhile Zenzi, founder owners.  Anil’s all around great guy and a wonderful host. We’d dropped into his place last night for a long pending dinner.

As Anil, poured out our drinks from the bar he said, “today’s dinner is all Nooresha (his wife). I just drove around and shopped”.

Well, here’s what we had last night…cucumber and carrot sticks with a refreshing dip and then some really bouncy cocktail kebabs with a mustard sauce which livened up the evening.

Nooresha then laid out the table. To start with there was a soup. A Bohri Soup. A cold soup.

Now, while Spanish gazpachos have made cold soups fashionable in Mumbai, the Bohri cold soup that Nooresh served turned out to be a real pleasure. I am sure the Spaniards would get as besotted with it as we seem to be with Gazpachos. The Bohri cold soup, which was yogurt and sprout based was smoked too and had a mystical Sufi ballad like taste and flavour to it which was so delightfully calming. It was just what Mumbai needs in its muggiest best and that cold soup is the sort of stuff which could help one attain moksha. As I remembered last night’s dinner this evening I so craved for a barrel of the soup. I think Anil should definitely stock it in the Bagel Shop.

Then there were bombils or Bombay Duck fried in the Bohri “style”. In other words, the water wasn’t squeezed out before frying unlike in the flat crisp versions. Instead, you had Bombay ducks which were crisp outside and plump and juicy inside. We kept lifting one Bombay Duck after the other from our plate and stuffing them into our mouths. This was not the time to be polite. 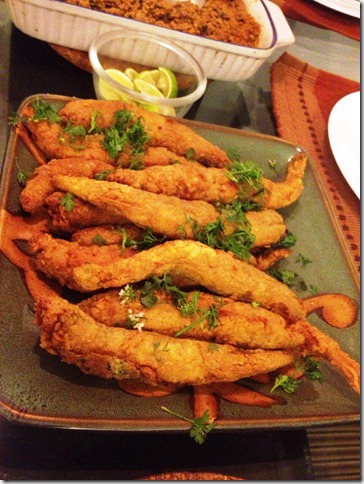 Nooresha had made a dahi vada which was flavoured enticingly with fried chillies, mustard seeds and the odd curry leaves. The sort of stuff that the Roca Brothers had in mind when they announced their Gastronomique Opera in London’s Mandarin Oriental a few hours before their restaurant in Spain was declared number 1 in the World 50 Best list. They had showed a video which included a bit about looking to Indian spices for inspiration. Nooresha’s dahi vadas would have given them plenty of food for thought.

Then there was a prawn curry which she made which was a tribute to the Khoja side of Nooresha’s family. Juicy prawns in a very well balanced, light and multi flavoured and textured gramflour based curry with drumsticks in them. This is meant to be had with khichdi but I took a big bowl of curry and had it straight out of it the way I would have a poetic Thai or Malai curry. 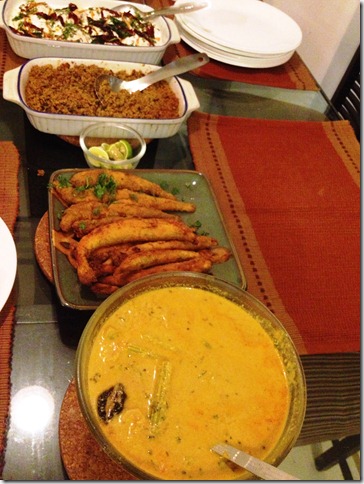 Nooresha had also made a goat’s mince meat ‘kheema chaap’ which looked dry and was yet so full of life and soul. The abundance of mint leaves giving a cooling balance to the solidity of real red meat. Yes, don’t let Indian restaurants fool you, Indian dishes too can give the world a lot to think about with their intricacies and balance…this was ‘beyond garam masala cooking’ at its best. 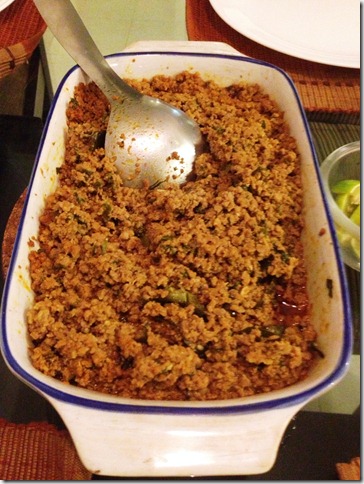 I believe that the famous Bohri thaal meal has sweets in between meals. At Anil and Nooresha’s we had desserts at end of the meal. The most delectable caramel custard which Nooresha had baked which I kept digging into and then a Bohri dry fruit adorned firni. Torn between both the desserts I kept piling them on to my plate. It’s been a while since I have eaten with such gay abandon as I did last night. Of course, I was feeling at home and I am sure some of that warmth had infused into the food but the food was, in absolute terms, the sort which defines the word ‘epic’. I hadn’t taken my camera because I hadn’t planned to blog about it but sorry Anil and Nooresha, this story I have to share.

So how do you get a taste of Nooresha’s cooking?

Well, you can’t really unless you get lucky the way we did and and get invited to their home for dinner. Could be a bit tough otherwise.

Nooresha is a caterer but from what I understand she only caters the world cuisine stuff that Zenzi used to serve and sushi through Sushi Koi. When I asked her why she doesn’t cater the sort of food we were privy to last night, Nooresha said “but who would be interested?”

Well I think, loads of folks would be. Folks who are hungry to discover more about Indian food. And folks who like and appreciate good food. Plus with Nooresha and Anil’s understanding of the modern urban psyche I am sure they would do a great job in unearthing traditional Bohri and Khoja cuisines and make them accessible to us.

So guys, I am happy to come over and have more meals at your place, but for the making the universe a better place, Nooresha and Anil you should definitely go public with this. 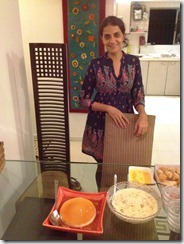 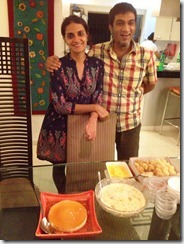 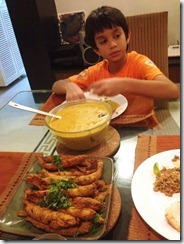 PS: Just back from an amazing trip of Barcelona and London. Have loads to write about. To start with, here’s what welcomed me when I returned, Rashmi Uday Singh’s update from London.

Rashmi had actually come to meet me at the Chowzters Awards Ceremony, which I was part of the jury of, as she had come for the World’s 50 Best Restaurants which she was part of the jury of (so proud of you Rashmi). Next day she got me on the list of the Roca Brothers event. Still speechless with joy from her kind words. Rashmi, you are really the best and the most big hearted person that I know of and I am so honoured and flattered to read this. You are too kind and made my day and year. 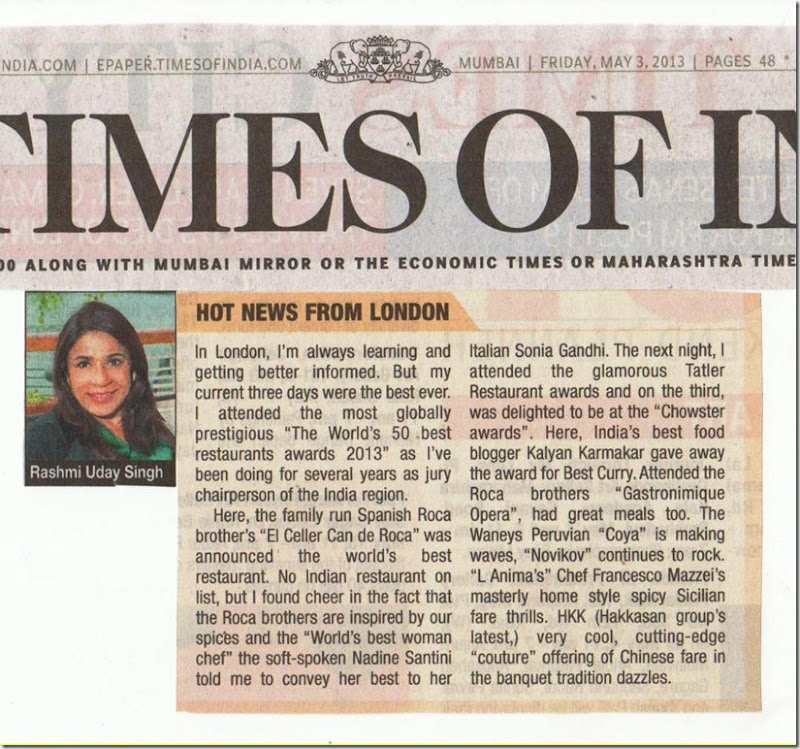 * The high point of the Gulab Gang party was sharing the same frame as the face from the collages on the wall from my teenage years…fond as I am of Soumik Sen, the director of Gulab Gang, I have to photoshop him out of this frame

Anonymous said…
Nooresha's khana must be exceptional for you to reckon it'd impress the winners of The World's 50 Best! And Nooresha, please heed Kalyan's comments - I, for one, would be one of those very interested folks...: )
6 May 2013 at 15:51

kaniska said…
in calcutta we don't get to sample much beyond your usual "chinese", mughlai and the ilk. lovely to hear you try khoja cuisine. had bohri food at someone's place and been a fan since. wish we would have such delicacies here too. and fantastic being called best food blogger by none other than rashmi uday singh. kudos. proud of you, always.
6 May 2013 at 16:16

Kalyan Karmakar said…
@Ketan: I did have a wonderful time :)

@Kanishka coming to Mumbai has broadened my horizons and thanks for the wishes bondhu
7 May 2013 at 13:14

Pinku said…
Its so good to see the comments section back.

hardika said…
Hi Kalyan
I was wondering if Nooresha takes orders on occasion? I would be a happy patron.Please let me know ! Thanks
20 June 2013 at 22:11