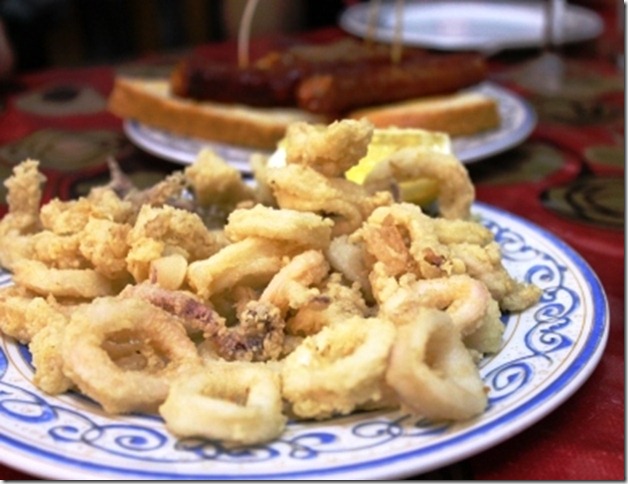 I had just got back to the Hotel Melia after the first day of Casa Asia’s International Congress of Asian Tourism when my phone caught the wifi and a twitter dm came in.

“Hi Kalyan, if you are free tomorrow then I would like to show you a side of Barcelona’s food scene which you haven’t experienced”.

The dm (direct message) was from @EatLoveSpain with whom I had exchanged a couple of tweets before this. Never to let go of a chance to see a place through the eyes of a local I quickly agreed.

We met up next evening in front of the General Post Office of Barcelona. EatLoveSpain, whom I got know as Carmen through subsequent tweets before we met, told me that her dad was visiting her and would join her.

If one looks back at the magical evening in Barcelona, seeing the city through the yes of Senor Manuel Rios Lijó helped make it doubly special. This is the city where the kind gentleman with a warm and benevolent smile was apparently once quite the wild kid.

Carmen had quite a clipped British accent and I soon figured out why. Senor Manuel was of the few Spaniards of his generation to learn English. He loves languages in fact. One of the ‘fruits’ of young Manuel’s love for learning new languages was meeting his future wife, a British lady whom he convinced to stay back in Spain. They now live slightly away from Barcelona where they run a school to teach English, provide translations, grow local produce and make olive oil.

Carmen is one of their children. 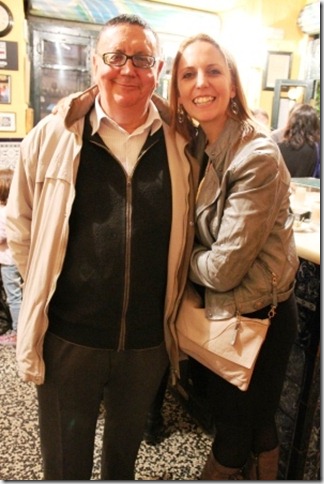 We set off down the winding roads of Barcelona, The picture postcard effect of the pretty city the strongest when the street lights came on and everything around got painted in hues of gold. 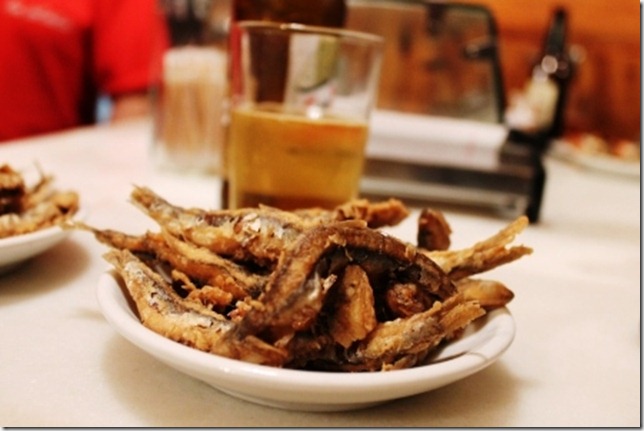 Our first stop  was La Plata. As Carmen promised, very different from anything we had seen before.

This was a tiny little place. Packed with folks. Smelling of fried fish. Very reminiscent of the original Los Damiantes branch in Granada. La Plata is one of Carmen’s favourite places now and her dad used to hang out here when he was young. The twinkle in both their eyes was touching.

This restaurant was opened in 1945, has only 4 dishes in the menu – small fried fish, tomato-and-onion salad, cured anchovies, and pork sausage – and six tables which have been packed with parishoners, tourists and even folks like Bono and Adrian Fera at times I was told. The crunchy fried fish and iced draught beer were the perfect start for the evening with my two lovely hosts. 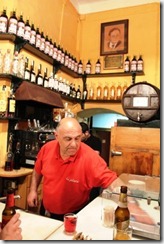 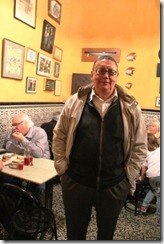 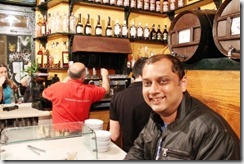 We walked down a few more lanes to reach our next stop. Another family inn. This one called Restaurante Bidasoa. 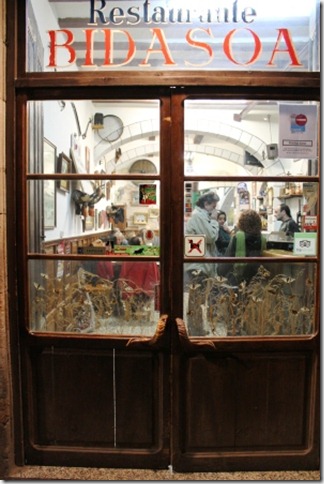 Surrounded by Spanish families we were made to feel at home as we were led to our table. Carmen and her dad were again fully at home here as the owner and his family and the much hassled waiter welcomed us in. If I needed any proof that its a place for locals to eat I suddenly saw Arturo Ortiz of the Spanish Consulate in Mumbai sitting there with his folks. Arturo had come to Barcelona for the conference and his folks had taken him to Bidasoa for the home food which he missed in Mumbai. 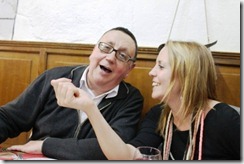 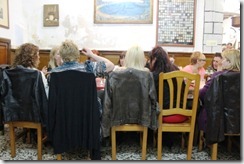 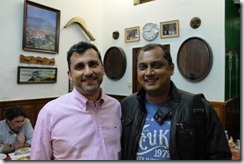 There was a certain honesty to the food in this unpretentious restaurant which really touched one’s heart. 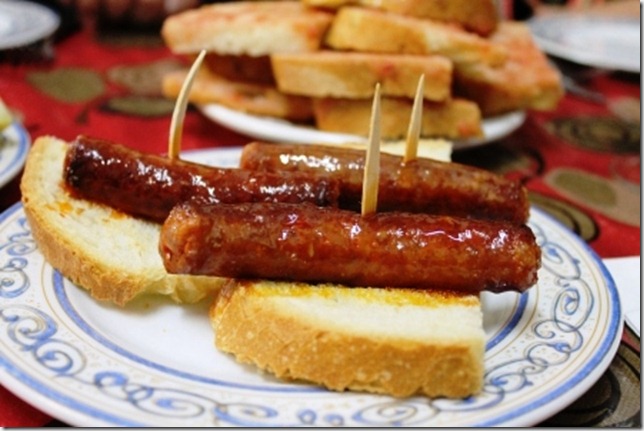 From the batter fried calamari that stayed juicy well after it was fried and was lying on our table,  to one of the best potato bravas that I have had with a bewitching hot sauce and after four weeks in Spain you’ve surely had loads of potato bravas to compare it with, the ubiquitous pan tomate and some great fried chorize that stood out on our table that evening. 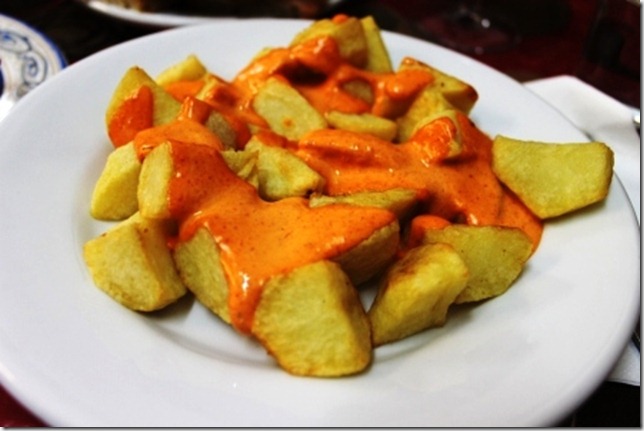 And then the revelation that there was more the ‘creme catalan’ when it comes to Spanish desserts. Carmen introduced me to the delectable curd topped with honey and on the way out one had a look at the pineapple covered with cream flan.

Bidasoa  reminded me a lot of Bhojohori Manna in Mumbai. A place folks would go to when they would miss simple food they have grown up on. 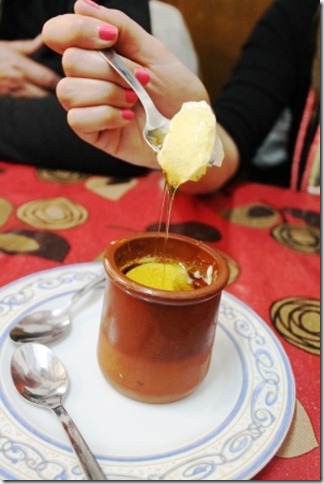 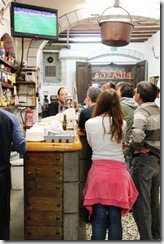 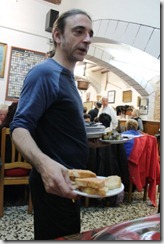 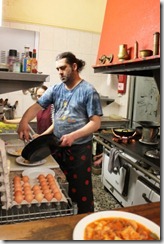 As I chatted with Carmen and Manuel it became increasingly evident to me that her dad’s broad mindedness and openness to cultures had rubbed on to her. I found it very interesting that unlike that unlike everyone else in Barcelona who spoke of ‘Catalonia’, to Carmen it was ‘Spain’. Which to many of us from outside is what Barcelona is, a Spanish city till you get to know more about it.

Carmen is working with local producers of Spanish produce and trying to make their products available to a larger audience through her website EatLoveSpain.com

To end the evening we walked down to Santa Maria Del Mar which is a beautiful cathedral, the square surrounding which was full of beautiful cafes and bars, once again bathed in the golden glow of the street lamps and the moon above us.

Can I use the cliché ‘picture postcard-like’ for the hundredth time during these Barcelona posts? 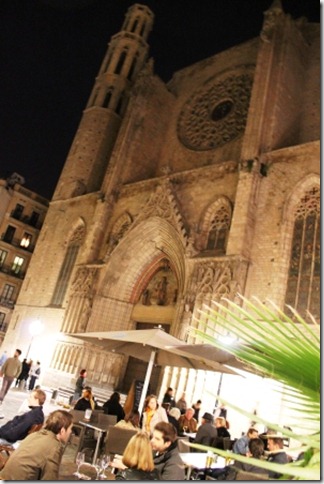 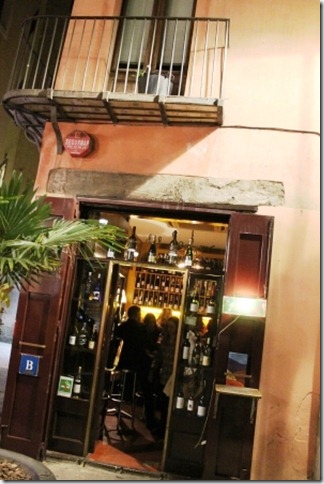 We went to La Vinya del Senyor, a wine bar where Woody Allen either drunk in or shot at, or possibly did both as Carmen told me. I finally managed to convince my hosts to buy them a drink and we said goodbye to the night with some cava and great truffles.

As is opening oneself to new experiences. 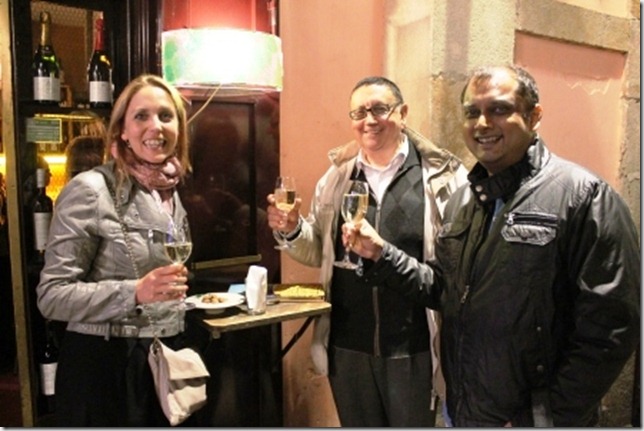 Really touched. Many thanks for your kindness. Twitter is a great wonder and I'm happy to have met you. I look forward to having you back in Barcelona for some more fun times and maybe a trip to Galicia, too!
19 May 2013 at 16:04

Carmen Rios / EatLoveSpain said…
We certainly will, Kalyan! Btw, the curd desert is called "cuajada" and the chocolates are "catànies" http://www.eatlovespain.com/catanies.html#.UZ3mJ3Aq_fI