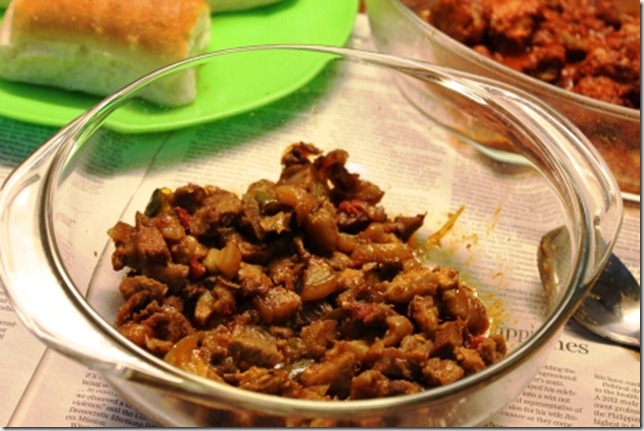 The pork chilli fry that we picked up today from Grub Hub, the tiny little place that has come up in place of MikNeil in Bandra, has got to be one of the nicest meat dishes I have tried this year.

This, mind you, in a year in which I have had the roast suckling pig in Madrid’s Botin, the pork pringa buns at Seville, the many plates of Iberico Jamon all over Spain, the heavenly Spanish Wagyu in Barcelona’s Can Xurrades, the hot salt beef bagel at London’s Biegel Bake and then the game meat at Vivek Singh’s Cinnamon Kitchen, the 7 hour roasted lamb at The Anchor and Hope in London. This has been a year of some memorable meat eats.

Yet the pork chilli that we just had from this tiny little place called Grub Hub just stands out.

I had noticed the change of name from MikNeil to Grub Hub while driving down from Bandstand, down the Yacht Bar and Chimbai Road in Bandra to the lane that leads to Turner Road and Pali Naka. Yet, I had never stopped there till this morning.

I parked the car in front of the tiny shop. It was a sunny morning and we were on our way back after breakfast at Mocha Mojo. I was craving an Indian breakfast like luchi alur dom or kulche chhole or puri bhaaji and the kheema ghotala at Mocha Mojo hit the spit. It was recently recommended to me and turned out to be a great call. 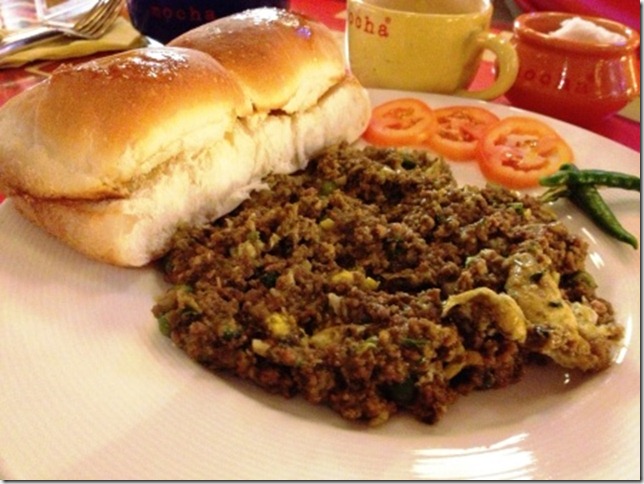 I got out the car, kept the aircon on for K and went into the shop.

There was a gentleman putting cutlets into the shelves at the counter while another young guy was shallow frying potato and beef mince chops. 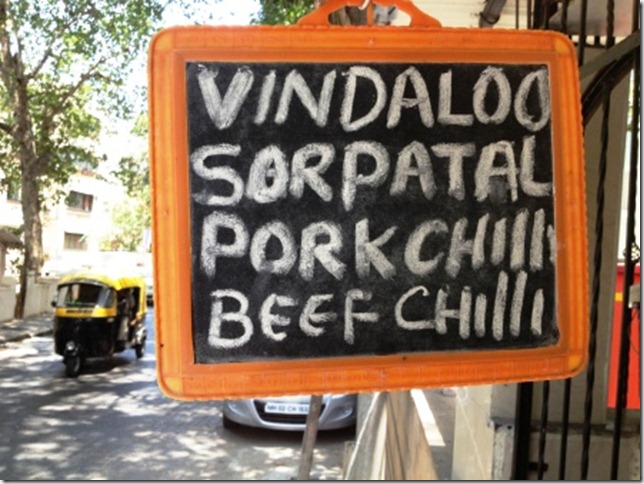 I saw some ‘Goan’ items on the menu – pork chilli fry, vindaloo, sorpotel & vindaloo and after checking with K went back to pick up some chilli fry and vindaloo.

The reason for the quotes around Goan are simple.

The first time that I heard about vindaloo was in the Apache Indian song from the mid 90s when I used to live in Calcutta. With time, after I moved to Mumbai, I got to know of vindaloo, and then sorpotel, as Goan dishes. Our initial source for this was New Martin Hotel, Mumbai’s most popular ‘Goan’ joint.

Well I recently found out that Martin’s is actually run by a Mangalorean gentleman. I had already spent enough time in Mumbai and Bandra by now to know that vindaloo and sorpotel are not just ‘Goan’ dishes. The East Indians of Mumbai and the Catholic Mangaloreans make these dishes too. I have realised that there are subtle differences between the versions made by each community. And there is the vindaloo of Kolkata’s Anglo Indian community that Bong Bong serves in Bandra

As a Bengali I must admit not to be an expert on these dishes. Not the best judge of ‘authenticity’. What is authentic is questionable though given the various versions around.

What I have figured out though is that like the Bengalis in the East, in the West it is the Goans who get most possessive and vocal about the vindaloos and sorpotels of the world just as we Bengalis would about kosha mangsho and rohu curry. They do consider any versions apart from their own just as we Bengalis would not even acknowledge that the Oriyas or Biharis or even Assamese make kosha mangsho or rohu curries in some form or the other.

While Bengalis are slightly less worse off when it comes to an entrepreneurial spirits and there are at least 6 or more Bengali eateries in greater Mumbai, there are next to no Goan run places here. So you have to hope to befriend a Goan to be invited to their place and hope to get a taste of the ‘perfect’ vindaloo, sorpotel, etc. ‘Touristy’ is what they will say with disdain if you mention any place in Goa to a Goan from Mumbai.

Well Grub Hub is not a ‘Goan’ place. It’s owner, Ravi, I found out was originally from Pune. His grandfather was a cook in the houses of the Parsis of Mumbai. Little Ravi used to see his grandpa cook and then from the young age of 10 began to try his hand in the kitchen.

The next part of this story unfolded when the company Ravi used to work in shut its operations in Mumbai. Ravi, now grown up, and his wife decided to move to Rome of all places where they opened an Indian catering company.

“The Italians didn’t like Indian food in the beginning as they found it too spicy but warmed up to it towards the end” said Ravi.

Ravi and his wife were in Rome for about 7 years and then returned to Mumbai where they opened Grub Hub. The two of them and their young assistant cook all the dishes in their house in Andheri and get it the shop. The food is kept in the fridge and customers buy these and take them home. It’s a takeaway joint with no seating or standing space inside. There is a tiny stand where Ravi and his assistant fry the cutlets and chops. 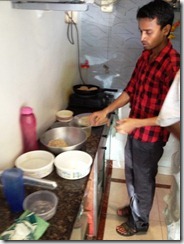 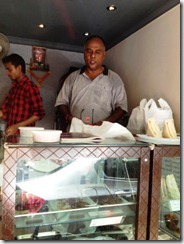 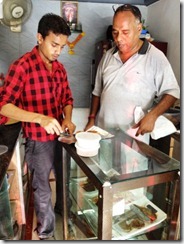 I asked Ravi if the food he served was Goan or East Indian. Ravi said that it was really a mix of all and more a function of what his Catholic Mangalorean wife, Leena, cooked at home.

They were shallow frying the beef and potato chops at Grub Hub when I was there. I just had to take a couple of them home. The aromas of the freshly fried chops wafted through the car as we drove home. We had these for lunch and K said that the taste was similar to those of the chops that her East Indian colleague’s mom would send in his lunch and which all the girls in the team would apparently wipe off. 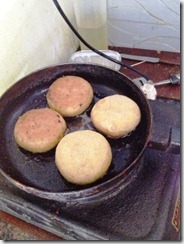 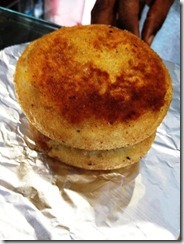 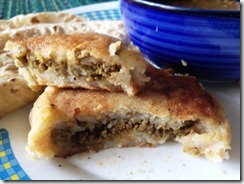 With the floppy mashed potato casing and a flavourful yet non spicy beef mince filling, the chops did have a very domesticated feel to them.

We kept the vindaloo and chilli fry for dinner which we took out of the fridge and heated in the micro before eating. 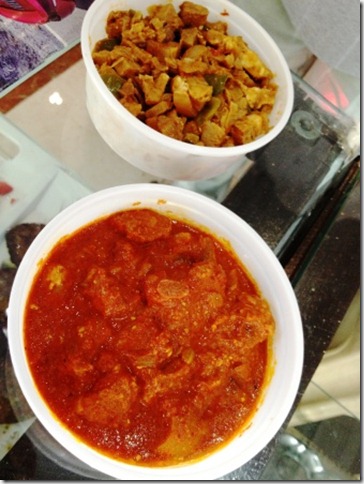 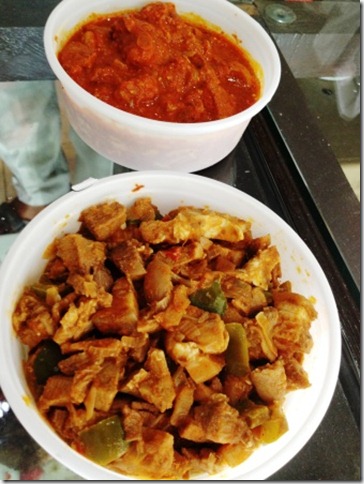 The pork in the vindaloo was extremely tender and there was a strong garam masala taste similar to that of the vindaloo at Bong Bong. The colour redder though and the taste sweeter than that of the spicy Bong Bong version.

K who is the vindaloo lover in the family (I prefer sorpotel) said that “the spice, sugar and sourness are just right and none is extreme. Plus it is not swimming in oil as some vindaloos tend to be”. 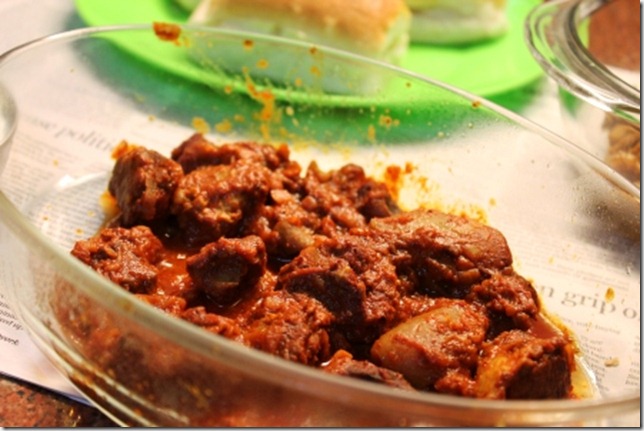 The pork chilli fry won both our hearts. The meat juicy, succulent… goodness which can come only from pork belly. Very subtle flavoured. The dish was all about the beauty of great meat with a few bits of capsicum adding the ‘chilli’ bit.

This was truly poetic stuff with the humblest of origins. Good food at its purest and most honest and earnest. 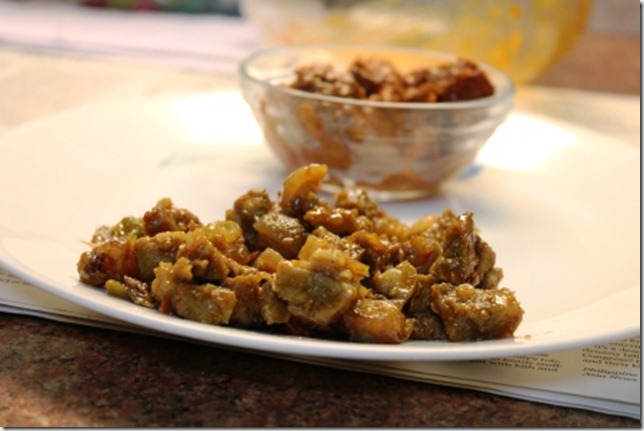 The pork chilli fry was a stupendously great dish. to think that after travelling all over earlier this year, all I had to do was look around and get us a great meal.

The three dishes at Grub Hub amounted to Rs 285 (6 USD). The shop is open from 9 am to 9 pm. They have a fairly eclectic range of dishes. 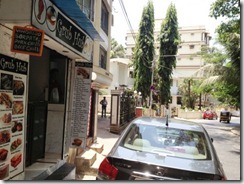 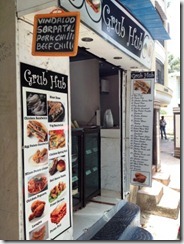 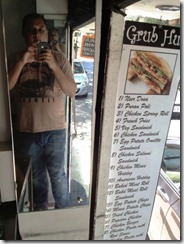 Poorna Banerjee said…
These are the times, Mr. Karmakar, I wish I was in Mumbai. I am planning a trip in August, and I have no idea how I will fit in all these... Already my "to eat" card is overflowing.
9 June 2013 at 11:28

Anonymous said…
nicely written.. they did have some killer sorpotel, vindaloo and aunty's roast beef sandwiches. but sadly, the place is shut.. they leased it out to one of the 20 new frozen yogurt chains in the city. :(
10 November 2014 at 13:27