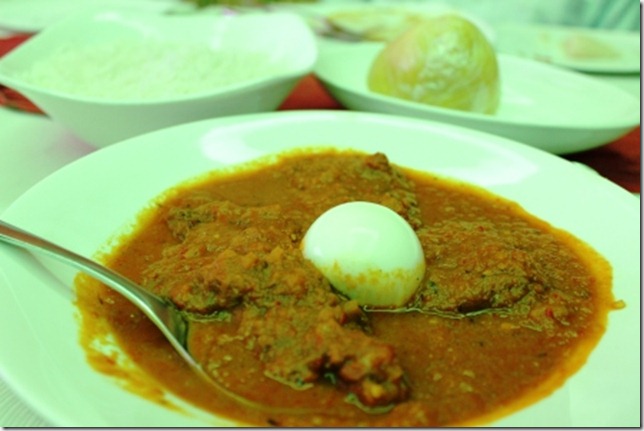 “I am Mr BK Dalal and I am your host today”, said Mr Dalal as he stood up to greet us when we entered the restaurant.

The welcome smacked of a certain vintage charm and graciousness which is a fast fading memory in today’s world. We had come to join our friend, Jamshed Adrianvala and his neighbour and friend Mr Dalal for lunch. We were at the Green Onion. This is a restaurant in South Mumbai’s Marine Line area beside Gol Masjid, Jaffer Bhai and Sassanian Boulangerie. 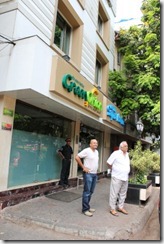 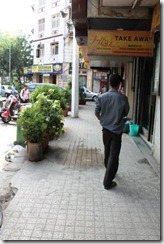 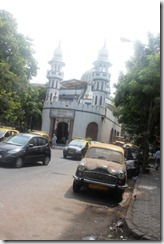 Mr Dalal & Jamshed Uncle had read Antoine Lewis’s article in HT Cafe about the Green Onion and had come to try the Nigerian fare that is available there. 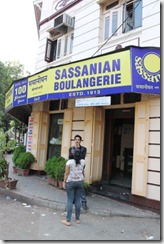 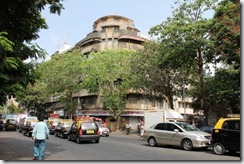 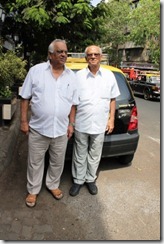 The prospect of a Nigerian meal seemed pretty interesting as I was not aware of any other place in Mumbai that serves Nigerian food. I asked another food loving friend, Suprio, to join in too.

What followed was an afternoon of great conversation as I sat and listened to the journeys and experiences of the three well travelled folks. It was great to have many of my Mumbai food choices vetted by an original Mumbai gourmand. Mr Dalal too felt that Ideal Corner serves the best Parsi food in Mumbai (his wife is Parsi), he loves the kebabs of Sarvi, approves of Swagath for dosas in Mumbai and isn’t too impressed by Swati Snacks (he is Gujarati). A well travelled man with exposure to the best food experiences available, he too believes that good food is rarely to be found in posh places and their food festivals. The place has to have a soul and commitment of the people who run them said Mr Dalal as all three of us agreed.

We also enjoyed our introduction to Nigerian food.

We started with the prawn egusi. We had been warned about the possibly fishy smell of the curry which is made with dried fish and melon seeds. We loved the choppy, Bangaldeshi bharta-like, texture of the curry and its intense flavours. The prawns seemed like they were spiced separately and fried and then added in to the curry. The taste of the prawns stood out from that of the curry and didn’t really gel though one must say that in absolute terms, the prawns tasted really juicy and fresh and the dish was a hit with us. Jamshed Uncle noted that the taste wasn’t very unfamiliar to our palates. 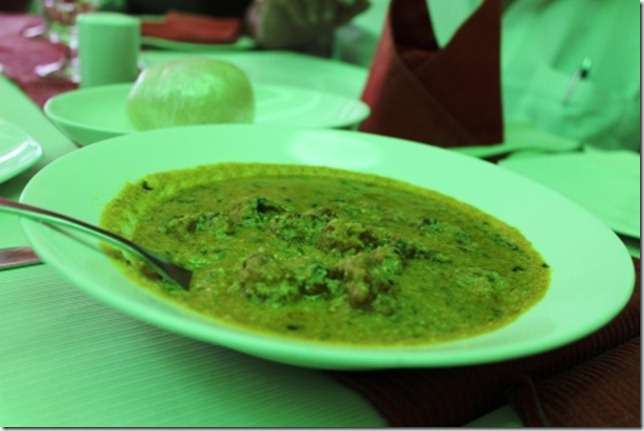 Next on was a Nigerian fish stew. A tomato based stew, delightfully woody in taste with the odd bites of red chilli adding a hint of fire. What won us over was the very tender and fresh fish which, on asking, we found out to be red snapper. If one was to connect with a taste memory then the stew had a slight hint of a Parsi tomato-based ras (curry) and that of a Moroccan tagine stew as served in Mumbai restaurants. 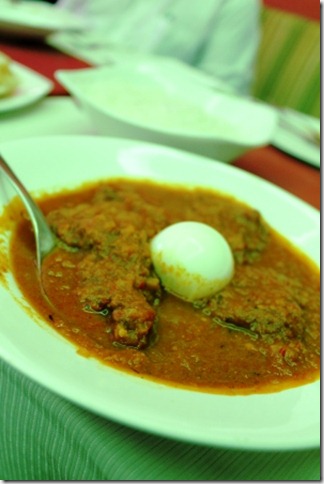 We had the stew with a steamed rice and then had a Nigerian goat jollof rice. Rice cooked with tomatoes and goat meat and served with fried slices of banana, like the Spanish paella, a not so distant cousin of the biryani family. I guess folks all over the world thought that cooking meat with rice at one go wasn’t a bad idea. The sweet taste of the sliced fried bananas went well with the sticky rice and the pretty good quality meat giving the dish a nice sense of contrast. 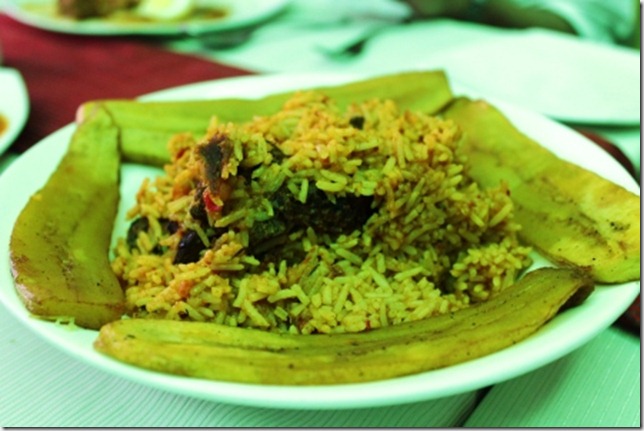 We also tried the Nigerian fufu balls…white pasty dough balls… made with semolina and the other with yam. Then there was a yellow one made with something called kasava. Can’t say that I took to either. 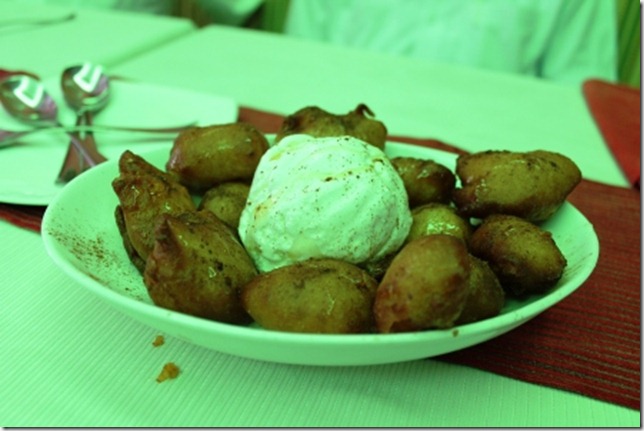 Once done and once we all agreed that we liked the meal, Jamshed uncle smiled at us with a twinkle in his eyes and said “I’ve been to Nigeria thrice. Didn’t really like the food there. This is different though. Not like what I had eaten then” 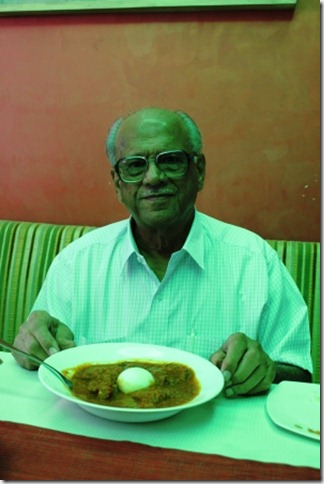 Well there were a few content looking Nigerian gentlemen in the restaurant when we entered and they left before we could go up to them and asked how they found the food. 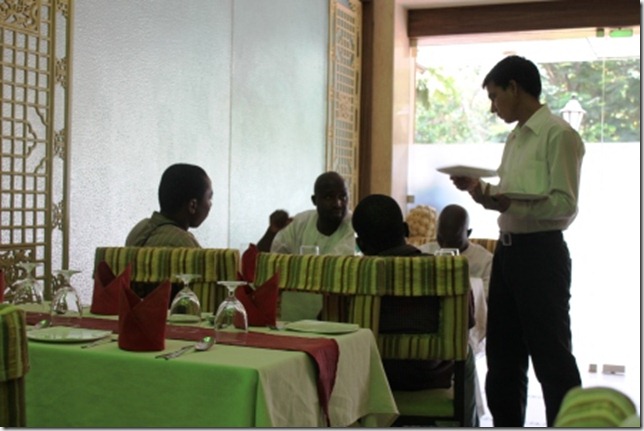 The history of Nigerian food in the Indian and Oriental serving Green Onion is interesting. Ruby Dogra, the Punjabi lady who runs the place, and who guided us through our orders (the waitstaff were quite conversant with the food too) said that Green Onion was attached to the Hotel Sapna Marine. The relatives of Nigerian patients, who came to Mumbai for treatment, would often stay in the hotel. Ruby, got these Nigerian ladies to teach her how to cook some basic Nigerian dishes which she could then offer in room service. Once these worked Ruby and her team got the confidence to introduce these in the Green Onion too. A story slightly similar to that of Kasturi in Kolkata which too was set up to feed the relatives of Bangladeshi patients who come to Kolkata for treatment. 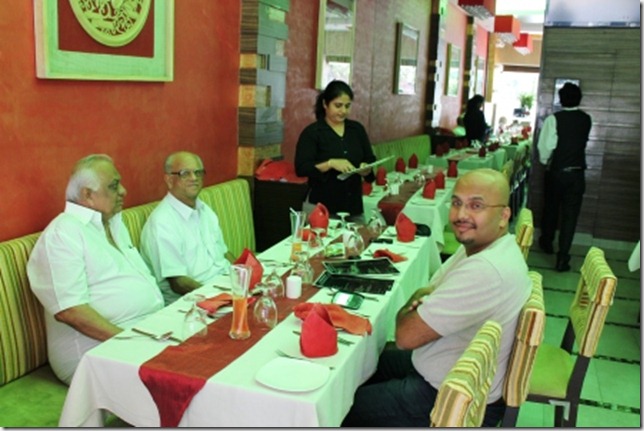 The lunch at Green Onion took me back to the mid 80s in Kolkata and the entry of Cheema Okerie, a Nigerian student who joined the football clubs of Kolkata. Suddenly the goal-less matches between East Bengal, Mohun Bagan and Mohammaden Sporting changed. The phenomenon called Cheema Okerie, the new player who towered over the Bengali footballers of Kolkata, whose rippling muscles awed all, would take the ball and whip it through the field to score the lone goal of the match. Suddenly we realised that football matches needn’t be draws between two teams that would soon loose steam in the heat of the Maidaan.

Whichever team had Cheema in their side, and he would often change teams, would win the League. 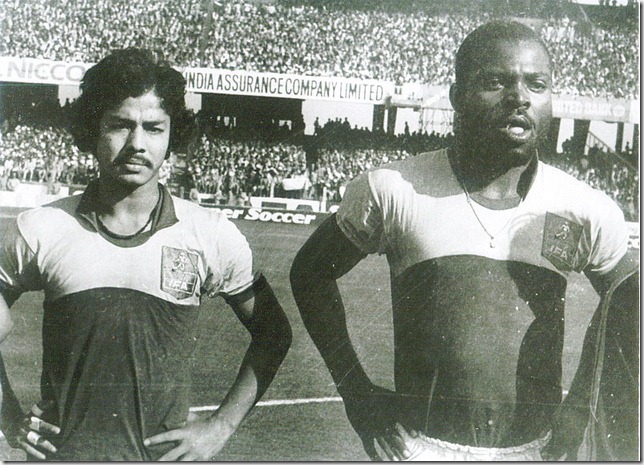 All of Kolkata would tried to deconstruct Cheema’s diet and wondered what fuelled this goal machine. 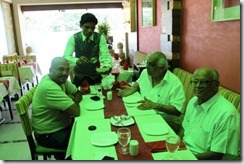 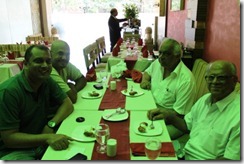 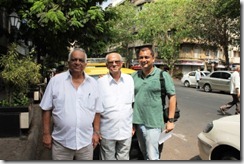 Shravan said…
Loved the piece. You've woven in a lot of interesting bits of history. This is what food writing should be. I'll definitely try and check this place out next time I'm in town.

Mrugesh Samel said…
As much as I love the food part of this article, I really love the Chima reference. He was the one I used to follow... Thanks K. And a wiki link for Chima fans... http://en.wikipedia.org/wiki/Chima_Okorie
19 May 2013 at 01:59

kaniska said…
nice story. the part about cheema really touched me. cheema joined mohun bagan and as a die hard east bengal supporter, we used to dread the derby knowing full well the prowess of the powerful nigerian. i think the person next to cheema in the picture is krishanu dey. untimely death took him away.
20 May 2013 at 11:23

Kalyan Karmakar said…
Blogger really needs to do something about the comment section. Had to refresh continuously before I could even reply to the comments you would have patiently left behind

Thanks Sassy, Kaniska, Shravan, Mruguel...though it a bit of a sobering thought that one's growing up years are now part of 'history' :)

Unknown said…
Very nicely written - must try the Nigerian food there. And yes, the reference and memory rewind to Cheema Okerie was awesome.. thanks again!
4 June 2013 at 09:41