The steak that all steaks want to grow up to be…Bos Taurus Iberico at Can Xurrades, Barcelona 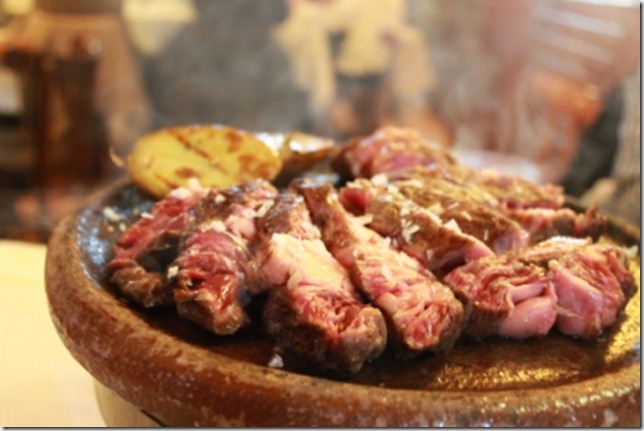 Suprio and I are both back at base in Mumbai reminiscing on some of the great meals we had there. Coincidentally K is in Barcelona right now. What were the chances of both of us returning to the city within 3 months of our first visit. Some hold the city has on us.

There are many reasons why I’d prefer to meet Suprio Bose, of the government of Catalonia’s ACC10, outside his office at Barcelona’s Diagonal than at his office at Andheri E…Can Xurrades is just one of them.

I went to meet Suprio at his head office in Barcelona for a late lunch after I stepped out of the Casa Asia International Congress of Asian Tourism. Suprio was in Barcelona too luckily and offered to take me to a place he often goes to when visiting Barcelona. He spoke highly of the meat tasting plate there. 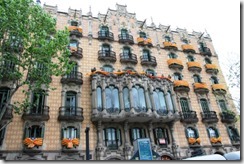 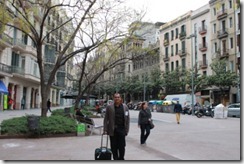 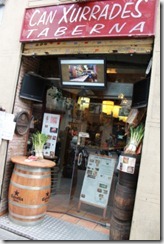 We walked down a pretty lane, close to one of Gaudi’s houses, to Can Xurrades. It was closed for lunch with the last guests finishing their lunch.

Suprio had spoken so highly of the place that I took a chance and suggested that we play the emotional card and the blogger card. We walked in and Suprio saw the chef and owner and flashed my card and told him in Spanish that we had come all the way from Mumbai, wanted to write about the food in Barcelona etc etc…or that’s what I think he said in Spanish and hopefully not “this guy’s come out of the asylum and will dismember me if he doesn't get some meat”.

Well something worked and the genial looking, tall and thin, Chef Rafa let us in. I later learnt that he often visits India and specifically Calcutta  work in charities such as Vicente Ferrer Foundation In Anantpur. His restaurant, Can Xurrades, is a decade and a half old and has a nice traditional look to it and was packed with locals. 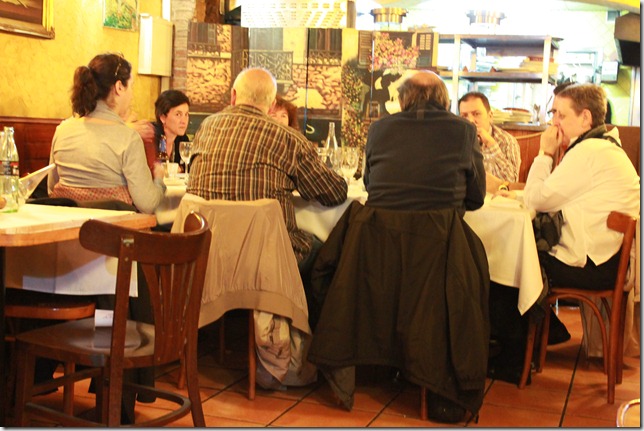 On hearing about my love for meat Chef Rafa decided to order for us. He took out a slab of lusciously marbled meat and headed towards the kitchen. 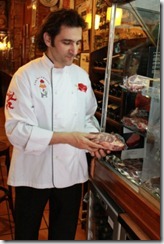 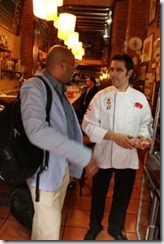 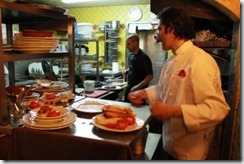 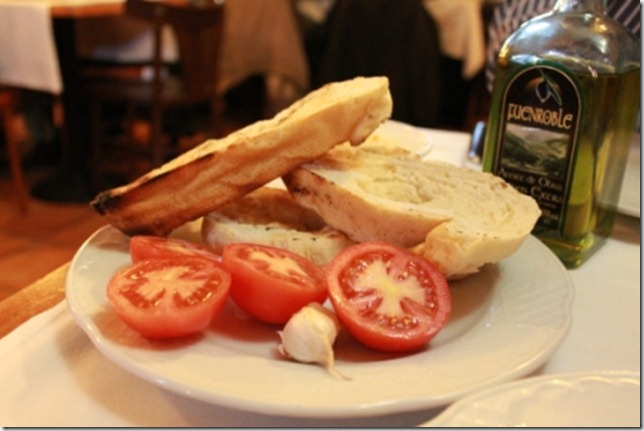 Then he came out with the ubiquitous pan tomate (tomato, garlic and bread with olive oil), the olive oil here so exquisite that I knew we were in a special place. The very kind Chef Rafa then sliced and got us a plate of the Iberico jamon (cured ham from acorn fed pigs) I so fell in love with during my previous trip to Barcelona. This meat had evident pedigree and bewitching bits of plump fat. Rafa said something to Suprio who then translated it as  “this is a gift from the chef”. 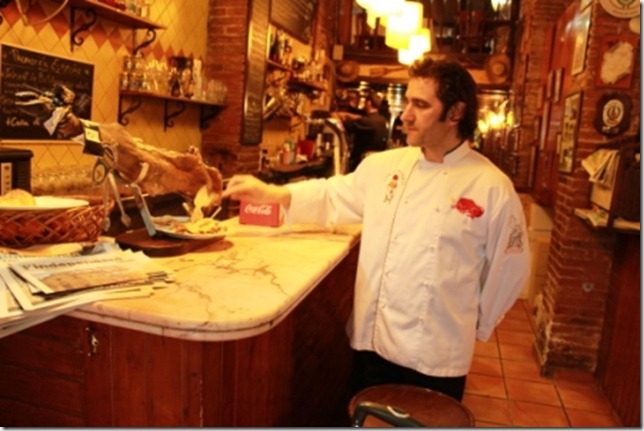 Come to think of it I did speak Spanish later  when I started my talk in the conference with “Little did I know when I left Barcelona that I would be back in two months” translated into phonetic Spanish by Suprio. I only remember the word ‘pronto’ from those lines.

Must have been the call of jamon, the caviar and champagne of cured meats that had called me back. 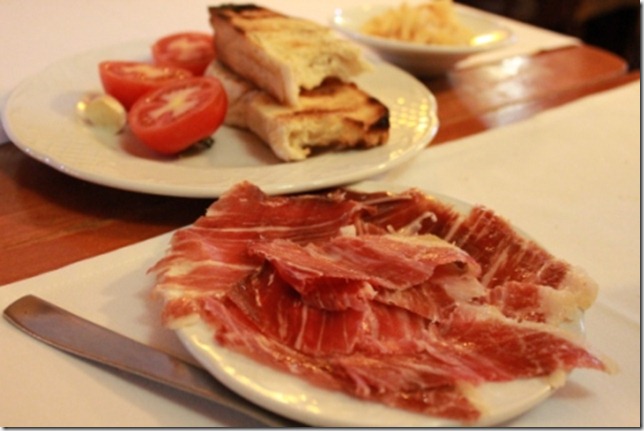 This meat was sayaguesa or Bos Tauras Iberico..the Spanish Kobe. Experts have apparently certified it as being equal to Japanese Kobe and Wagyu beef. I was told that there are only 4 places in Spain authorised to sell it and that apparently Can Xurrades is the only one in Barcelona ‘licensed’ to do so. 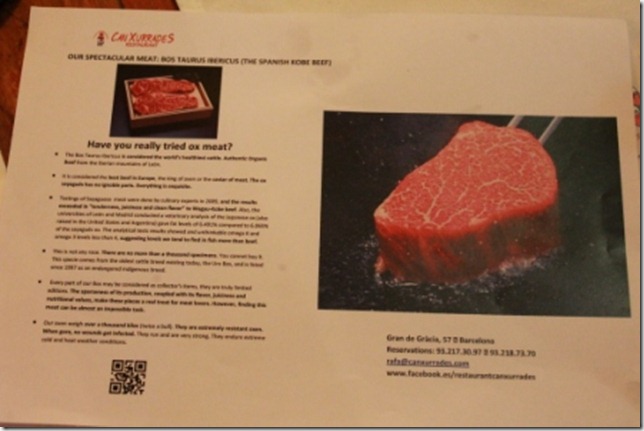 The way Chef Rafa cooked it is that he put the slab on a grill plate and turned it around to seal the flavours, sprinkled sea salt to season it and that’s it. The meat cooked in its own marbling (fat) and needed no other condiments.

He then put it on a hot stone plate and got it to us and then sliced the meat. As the heady aromas wafted out and the Chef looked like a saint in heaven as he was shrouded in the steam coming out of the meat. 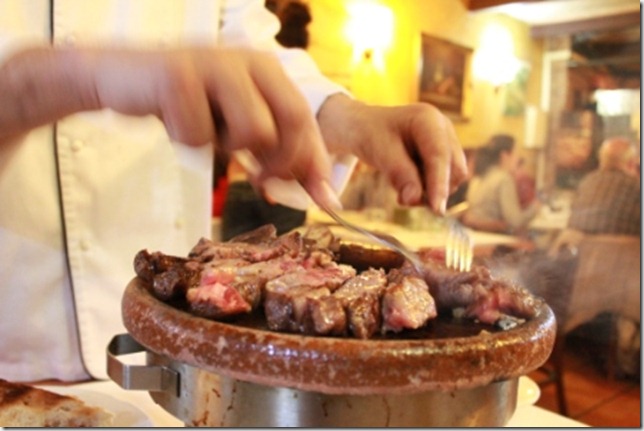 How did it taste?

When I travel I seek out experiences that one can get back as memories of the places one visits. With the Taurus Iberico at Can Xurrades, Chef Rafa & Suprio ensured that I found myself the steak which all steaks that follow in my life have to beat.

Now that’s something to look forward to. 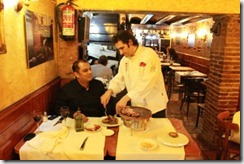 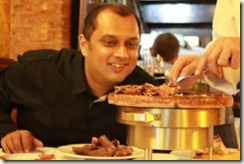 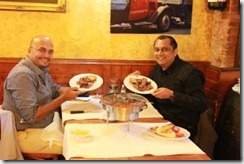 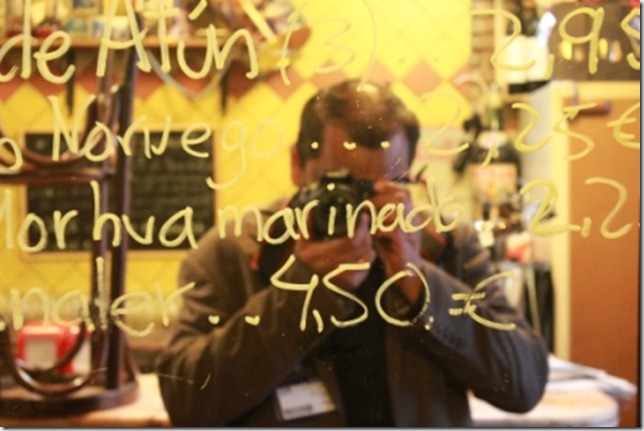 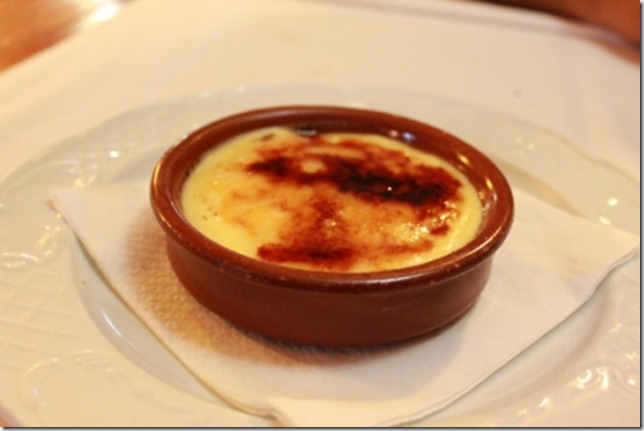 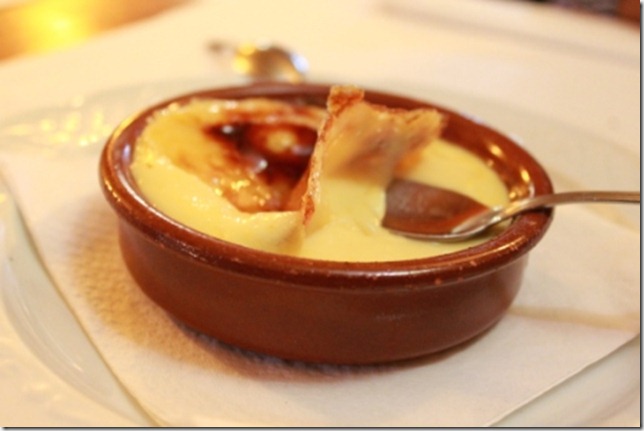 Suprio and I later went to the Plan Marcet football academy in the outskirts. Kids train here under world class facilities and coaches and the academy is a nursery for the Spanish football clubs I am told. They plan to offer training programmes for kids in India in a bit and hopefully something great will come out of that 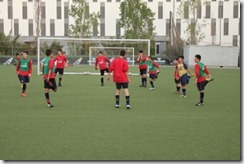 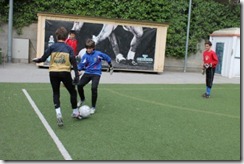 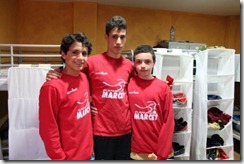