There are many things that bother me.

The lack of good food options in the new office complexes of Mumbai for example. Anyone who has ever worked in the old CBD of Fort, with its paradise of food around, can never reconcile to the lifeless, barren, Darth Vader’s Starship-like steel and glass towers coming up in Mumbai at Parel, Andheri, Kandivli, Kurla, BKC, Vikhrohli and the like. Environments which are so robotic in comparison to places like Fort or Nariman Point before the hawkers were driven away. It’s as if the planners had left the soul out of the drawing boards while designing these.

The other thing that bothers me, on an unrelated note, is the food in coffee shop chains. Barista, CCG, Gloria, Costa…all serve largely inedible stuff. I’ve not tried any of the Starbucks food-stuff here yet and Coffee Bean & Tea Leaf in Bandra at least makes some of their food on site. All the pre-packed food in coffee shops…the sandwiches, puffs, biscuits…all such a rip off.

Which is why I was so pleasantly surprised the other day when I stepped into Lower Parel’s Peninsular Business Park the other day.

I’d gone to the CCD there for a coffee. Pen Park is one of the first business complexes in Mumbai to have a coffee shop. My third grouse is about the very bad coffee and, I assume, tea served in most offices. A coffee shop in the complex is such a relief. 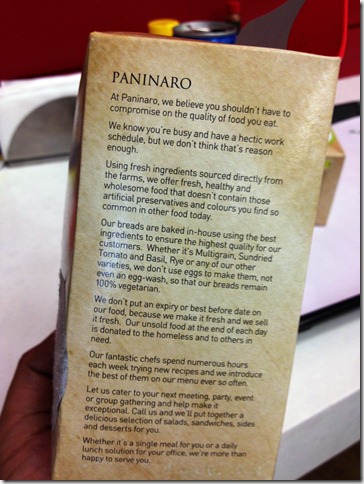 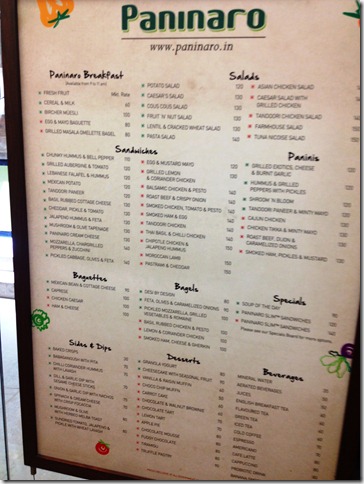 Well, coffee done, looking for a bite I suddenly thought of Paninaro, the sandwich shop beside CCD in Peninsular Park. This had come up just after I’d stop coming to Pen Park and I hadn’t tried out their food before.

We walked into the tine shop which can seat about 10 or so. They have an array of pre-packed sandwiches, bagels and so on. 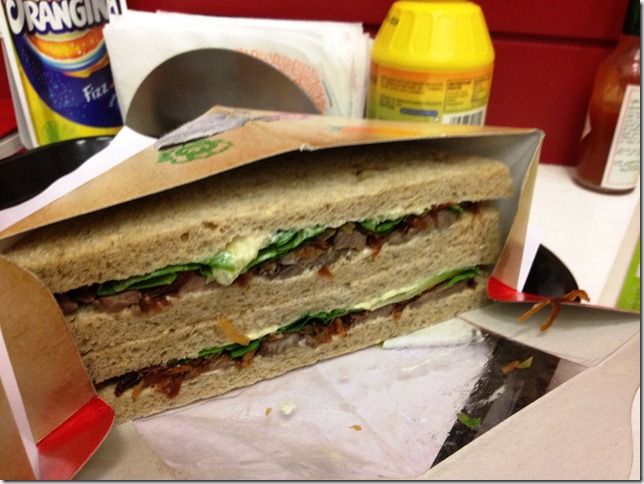 I was with Joseph who likes his food and his meat and who went straight for the roast beef with fried onion. I chose the ham with egg salad. There were other stuff including veg which were cheaper in comparison to our orders.

We picked up our juices and colas and sat down. Had half our own sandwiches and then swapped. With each bite of the sandwiches our smiles spread wider and wider. Like two school boys at lunch whose moms had sent them their favourite lunch box fares.

The bread was soft and yet frim and not limp. The meats thinly sliced but both quite flavourful. The beef paired beautifully with the rocket leaf salad and pickled onions. As did the the thin slices of ham with the flavourful and moist egg salad with salad leaves.

At Rs 140 (2.5 US approximately) each these sandwiches were easily some of the tastiest stuff I have had in an office complex and is one of the best, if not the best, store bough pre-packed sandwiches that I have had. 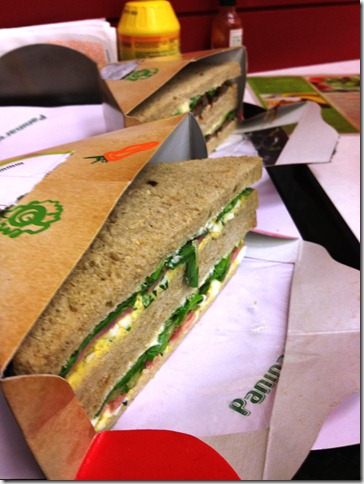 That’s two of my grouses killed with one bite. 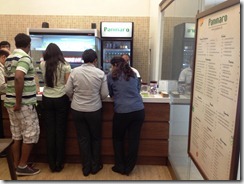 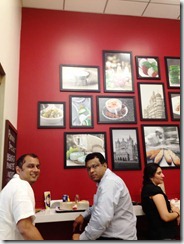 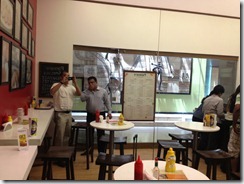 News: Thought I will share some things happening at my end. New beginnings. New ways of working. New people to work with

For those of you who know me as a market researcher, I’ve joined  MRSS as an advisor. The idea is to bring together my love for social media in the search for consumer insights. Looking forward to some interesting times here and you can read about it on Campaign India

And back to food for those who got a bit impatient, I’ve started a weekly column for men on food in www.liveinstyle.com . Here’s the first post and a recipe for a chorizo spaghetti.

Rajvi Bhow @ Straight talk said…
I love paninaro sandwiches! they are so fresh and love the mix of ingredients.. I used to work at Nariman point and the sadnwiches my fav option for lunch or a quick snack on my way back home!
15 June 2013 at 18:00

Rhea Mitra Dalal said…
Wonderful to read about the new column and the new assignment as advisor!
17 June 2013 at 07:34

BongMom said…
Kalyan congrats again on the new role, if I understand correct that is a job right ? not for fun alone ;-)
Congrats on the new column too
18 June 2013 at 07:38

Kalyan Karmakar said…
Thanks for your wishes Rhea and Sandeepa. Yes, it's been an interesting experience.
18 June 2013 at 23:54