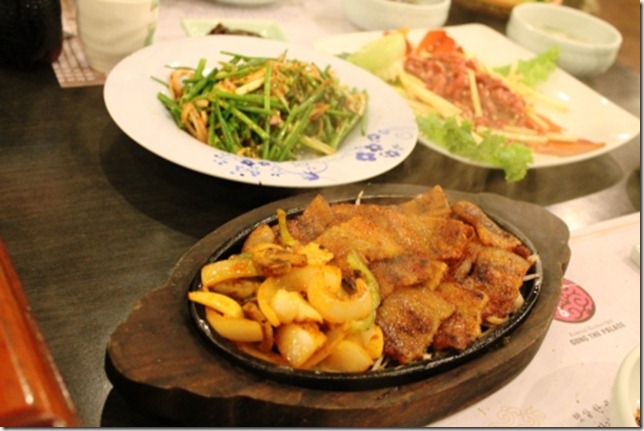 My latest post on liveinstyle.com is out. It’s on Bohri Mohalla and you can catch it here

It started with the lovely dinner at Pind Balluchi and boom…I had three more great eats in Gurgaon after that.

Things seemed to have taken a gastronomic turn for the better when it came to eating out in Gurgaon for me with Pind Balluchi . Each meal competed with the other to wow me. Just as I was settling down to write about the lovely fish koliwada, chicken stew and appam that I had with Rathhin at Swagat came the sliced pork with chilli and ginger that I had at Nooba ordering from the Chinese expat menu that Rathhin suggested I ask for. Then there was the life defining meal at Gung The Palace that almost everyone had recommended that I go to. 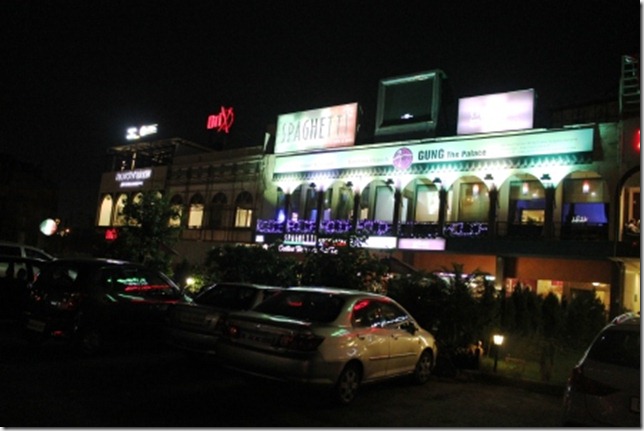 So what do I write about first? Should I go sequentially? Or should I live in the moment?

Look I need to tell you about Gung the Palace first and why it is now one of my favourite restaurants now.

I went to the the branch of Gung The Palace at Sector 29, Gurgaon this evening. It was on my list for a while. I had seen folks talk about it on social media. Everyone told me to go there this time. So I went.

This was also where I got to meet Rajyasree Sen. You might know her through her spunk-filled twitter timeline and her handle is @Rajyasree A quick read of her twitter bio shows that there is a lot that she is into.

And evening of intense adda followed as we spoke about LMG & SJS, JU & Presi…acronyms that speak to folks who have grown up in Kolkata…we talked about experiences in dealing with online and offline publishers, of our career moves, our interests in food, our dislike for pushy folks, our inability to be diplomatic and our stands on not letting drink come in the way of our enjoyment of food, our moves from out of our comfort zones into her caterings and my walks, our agency lives, our wariness of faceless food social media communities, our Calcutta memories and our lives in our new homes, and our shared views on potlucks…it seemed like that we were picking up from when we had last met…except that we were meeting for the first time.

For Rajyasree this evening seemed to be a new experience as I was apparently one of the first folks she has met from twitter. For me this was one more in a series of some great friendships that I have made, conversations that I have had, food that I have eaten, connections that I have made through twitter. Something I feel so lucky about. I mean it was just yesterday that I had the great afternoon meeting Rathhin for the first time (that post will come your way) and then today with the Brown Sahiba. 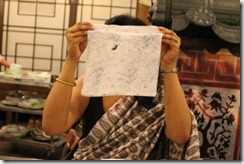 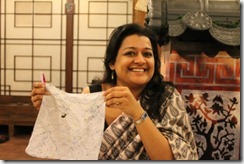 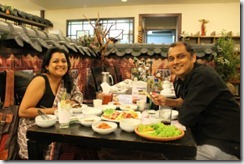 Sorry. I got carried away. This post is about Gung.

Well we went up to the first floor, past the ladies in Kimonos standing in attention. Given bad backs and the complexities of managing a sari we chose a table with chairs over floor seating or the cabins.

The stewardess came to take our order and offered to guide us through the menu while I tapped on the recommendations that I got from people and memories of my first Korean meal in Melbourne. At the end we went and ordered something completely different and came out smiling. 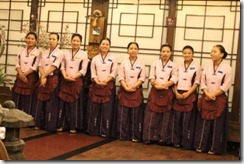 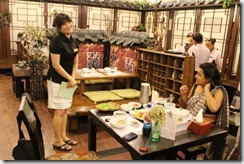 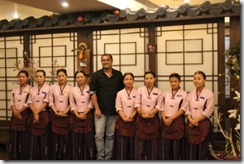 While we waited for our order they got us an array of starters. Kimchis – spring onions, lettuce, water chestnut. Oriental tea fermented eggs. Sweet potatoes in sesame. A lovely palate cleansing fermented (spinach ?) clear soup, soft pancakes similar to a sort of parathas Bengali grannies make and, for some reason, some cold farfalle in white sauce covered with toasted sesame seeds.

This was on the house and swept away the morbid memories of the dry bread with a rosemary overload that they gave with a limp mushroom soup at the Spaghetti Kitchen, next door, the previous night. 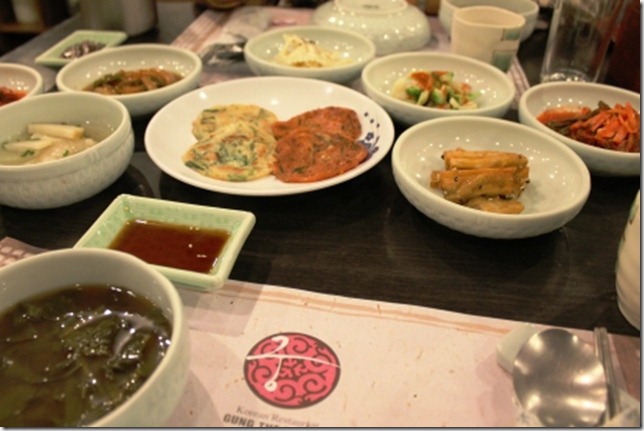 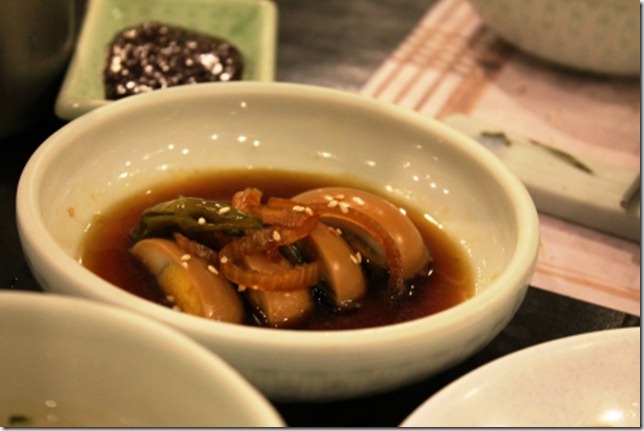 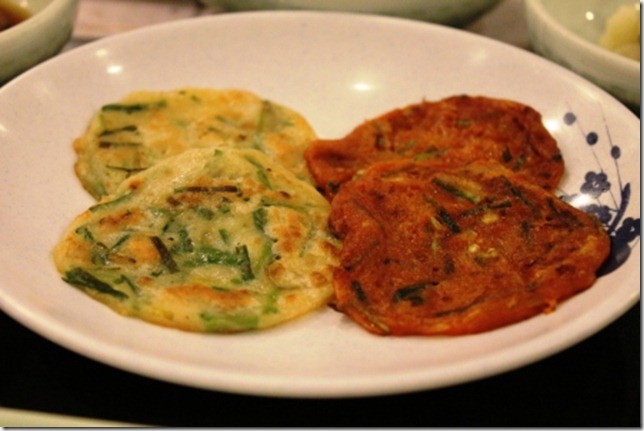 Tortured by K’s reports of steak tartar and foie gras meals in Barcelona and now Madrid and Cannes, I had to order this. Rajaysree was game too. The hostess at Gung was not convinced though.

‘Please sir, try something else’ she said.

‘It is very good. We import it from Korea. No one has fallen ill having it. But you have something else sir’ she said.

‘My wife is sending me pictures of steak tartar from Spain and I have to order this’ I said.

She gave up and agreed. 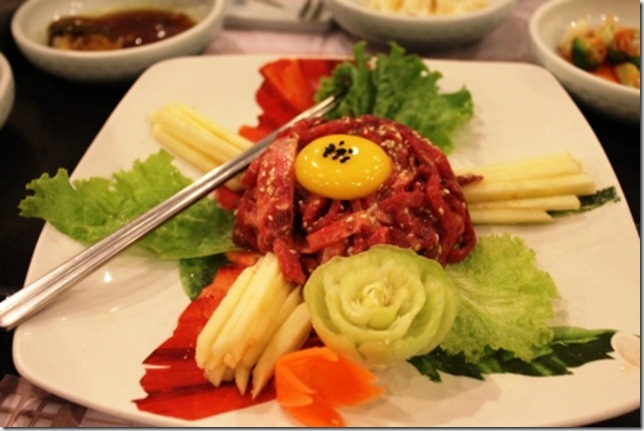 The dish that came to our table was a beautiful example of Oriental art. Noodle-shaped strips of raw beef arranged in a whirl, decked with sesame seeds and topped with an egg. One of the wait-staff mixed the egg yolk into meat and we then dug in. 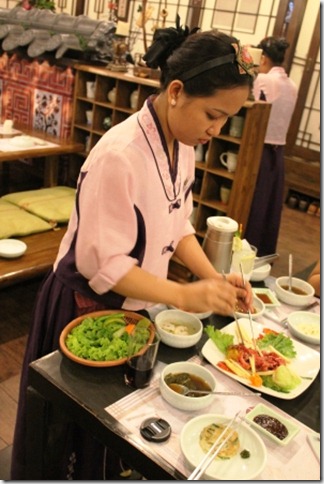 The dish was a great example of a delicacy in a meat packed dish. Extremely light, well flavoured with no spices to come in the way of your enjoying your meat. There was a slight bounce to the dish and the strips of apple adding to the sense of freshness, joy and vitality.

Refreshing is an adjective rarely associated with meat but the beef sashimi at Gung was just that.

Our next dish arrived. A dish that once again was chosen in conjunction by Rajyasree and me and this time without a struggle with the stewardess.

Red chilly paste pork belly served on the sizzling plate that Koreans are so fond of. 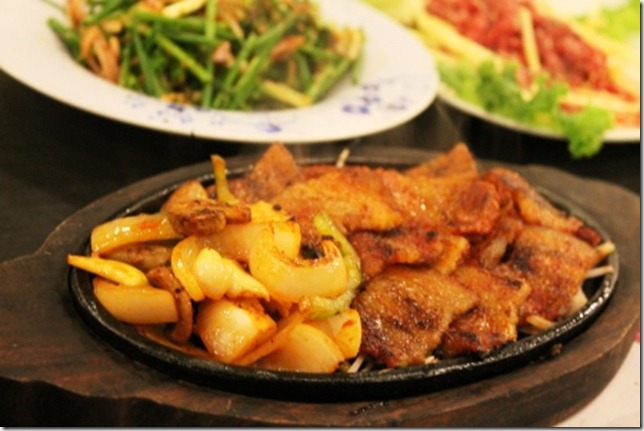 I took a bite of the pork and smiled and smiled and smiled. It was one of the best renditions of pork belly that I have had anywhere in the world. So tender. So Juicy. So poetically flavoured. Served with some greens which we barely picked at like two naughty Bengali kids.

The memory of the rubbery soy sauce overdosed ‘Canadian’ pork belly that I had at Wokamama here a few days back and its red chilli powder decked clammy pad thai were quickly pushed away. The Thai herbed chicken dumplings & Chicken green Thai curry there were quite nice though.

With the beef sashimi and the pork belly Gung The Palace has become one of my favourite restaurants in India and in the world. 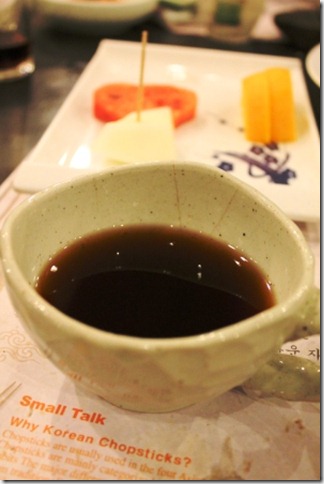 With us too stuffed for desserts, the lovely folks at Gung bid us goodbye with a plate of fruit and a cinnamon cold tea which is similar to the famous ‘Kaya drink’.

Rajyasree and I stepped out and bid goodbye to each other. I headed to the hotel with a smile on my face which stayed with me through the night. This was one happy meal. 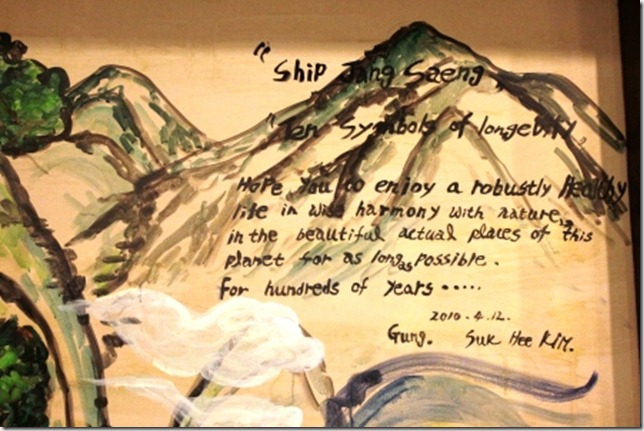 k10 said…
You should have a disclaimer at the beginning of each review post..."Please keep a napkin handy. Drooling on your keyboard is not my responsibility'.
21 June 2013 at 12:10