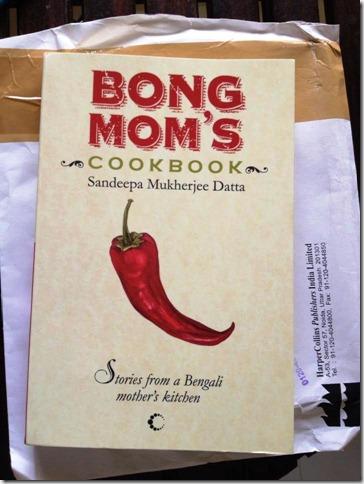 I was quite excited when I received a review copy of ‘Bong Mom’s Cookbook’ written by Sandeepa Mukherjee Datta recently.

Her blog of the same name is one of the earliest blogs that I began to follow and have continued to do so since. We’d been interacting with each other through our blogs for about 3 to 4 years now, if not more, and I was quite happy to know that she was writing a book. I was looking forward to getting hold of her book and pounced on it the moment I received it.

I was a bit apprehensive to be honest after the last time a publisher had sent me a cook book where I couldn’t progress beyond half as the writing was very very mediocre.Sandeepa’s book, however, I finished over two successive evenings.

Her book is everything that one expects while reading a blog. Relatable, engaging, personal.

In the book Sandeepa makes no bones about the fact that she is neither a chef nor an ‘expert’. That she has learnt her cooking over the years after she had to fend for herself when she left home for Mumbai with no mommy to look after her in her new city. And then after she became a mom herself in the US and had to take on the role her mother played, in a foreign land, in a different age, juggling her life as she looked after her husband and her daughters.

In her book Sandeepa writes about recipes she has tried, those that worked for her, and occasionally those that didn’t. She doesn’t claim to be the final word in Bengali. This book is not what you should buy if you are looking for the ‘Ultimate Bengali Cook Book’ or an ultimate guide to Bengali customs and traditions. What is ‘ultimate Bengali’ is questionable of course as Ritu Dalmia points out in her recent book on veg cooking. Ritu talks about how she tried to get the recipe of Bengali begun bhaaja and how her Bengali friends gave her a ‘definitive’ recipe of Begun Bhaaja each from their end. None of which matched.

So what you get in the book are Bengali recipes which Sandeepa has tried and has worked for her. Recipes that would give you a canvas to create your own ones. In a real world. A world where you could be living far away from the rice fields of Bordhoman or the eelish laden water of the Podda. A world where Sandeepa’s pragmatic enough to say that the conventional breakfast for many Bengalis today is (ugh) muesli.

She does give the recipe of luchi and kosha mangsho though.

Sandeepa is a blogger and realises that what makes a blog endearing and enduring are the stories in them. Her book reflects this and is a collection of her recipes stuffed in between her stories in the best traditions of patishaptas or Bengali crepes.

This could often be a recipe for disaster as holding the attention for a paying reader over a book is very different from than writing a blog post. It’s the same as the difference between 20 20 cricket and test cricket. It’s the reason why a Ravindra Jadeja will never be a Kapil Dev. I had once read a book by a blogger whose blog I like. The book was disastrous.

For a first time writer, Sandeepa manages to smartly carry her personalised, light, irony smacked style of writing competently through the book. It is possible for such books to become too culturally referenced and specific and for the humour to become stale after a while. Sandeepa adeptly avoids that leaving us with quite a pleasant read.

Chances are that if you are Bengali you would find something to relate with in her book.

For me there was lots. Using packaged parathas for egg rolls, converting stale bread into savoury French toast, the search for fish in an alien land, adding turmeric to alu posto, getting bugged by snarky Bengali comments on the blog ‘let me teach you the ‘correct’ way types and, most of all, standing outside STD (!) booths in Mumbai to make twice a week calls home.

Good show Sandeepa, proud of you.

This book is currently available on online sites such as Flipkart from what I understand and will be in stores in India soon.

We've recently launched the site Recipes.in where users can search through hundreds of thousands of recipes from Indian food sites and blogs.

We noticed that you have a great number of tasty recipes on your blog and would like to suggest you have a look at our Top Food Blogs section here, where you can add your own blog: http://www.recipes.in/top-food-blogs

Our concept is already live in 36 countries, the US, Mexico, UK, France and Spain amongst others. We deliver thousands of visitors to food blogs daily. Some of the top food blogs receive 10,000+ visitors from us on a weekly basis.

Hopefully your food blog will be up there in the top!

Glutton said…
I think its time you may venture into a restaurant of your own; Finely Chopped! Given your attention to details and knowledge of food amongst other things, it needs to be put into a higher cause for all foodies :-)
14 June 2013 at 22:09

BongMom said…
Thanks Kalyan. You review like an expert I must say and that bit about stories and stuffed patishapta, wow. It has been a pleasure knowing you all these blog-years
15 June 2013 at 10:07

Kalyan Karmakar said…
@BongMom thank you. I am sure being an author is a lot more aspirational than being a reviewer

@Glutton...thanks not sure my interests lie there...would be happy to consult folks but running a restaurant requires a lot of heart and nerves of steel
15 June 2013 at 18:54

Neha Sharma said…
The way the book has been written is really entertaining. The recipes are mostly easy to make but the ones I've tried didn't really turn out great. More than a cookbook it is better to read this book as a diary written by a Bong mom.

There aren't many recipes in the book and there are more of them on the blog. Also the lack of any pictures make it a rather boring cookbook.
5 March 2014 at 19:58