With Marryam Reshii with the divas of a Kashmiri Kitchen…Ghitorni, Delhi 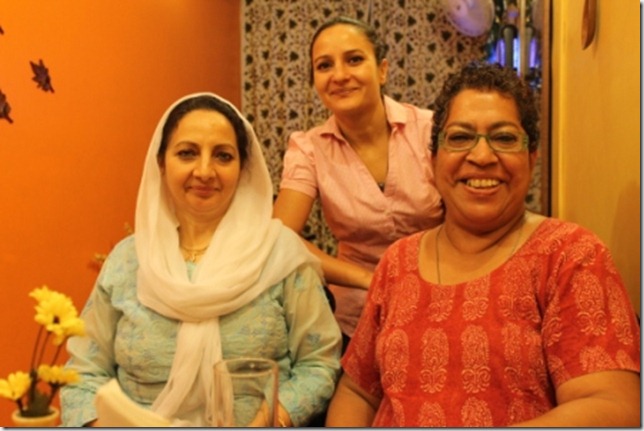 Pic: Marryam with the big grin in red with Pearl and Qamar Khan

I was intrigued to know what would make a Goan girl married into a Kashmiri family in Delhi feel a lot more Kashmiri than Goan.

I am talking of the renowned Delhi based food writer Marryam Reshii. If you follow her tweets ( @Reshii ) you will often find her talking about matters Kashmiri. She is probably the biggest ambassador of Kashmiri food in media and has very recently written about it in the BBC Good Food Magazine India for example. And, as I recently discovered, she speaks very chaste Kashmiri.

Why was it so? I was curious.

I got my answers when I took Marryam up on her offer to feed me some good Kashmiri food recently. I took the Metro from Gurgaon (lovely aircon) to a place called Ghitorni in Delhi while the eminently huggable Marryam, as I call her, drove down 30 kms to meet me. 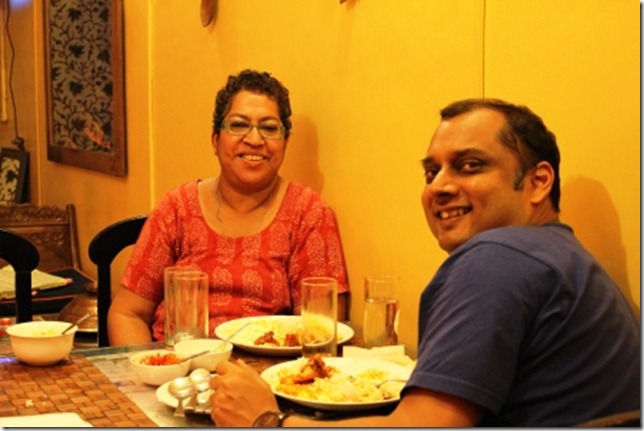 Kashmiri Kitchen is a 2 year old restaurant run by Pearl Khan, a Kashmiri lady who’s lived in Delhi for about twenty years now. Her mother, the lovely Qamar Khan, whom I later realised reminded me of the actress Saira Banu, had moved in from Kashmir a couple of years back to help her daughter out. The two ladies, with loads of courage and spirit, have been trying to introduce the culinary marvels of their home to the people of the city they now call home. 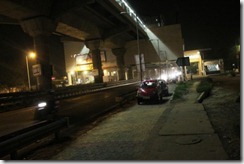 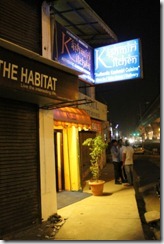 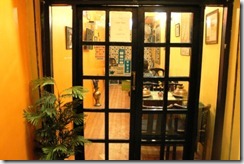 Kashmiri Kitchen is a small place with two tables and one floor seating area. They also deliver out and do corporate orders. When you settle down you feel that you are in someone’s drawing room. Sitting down in Kashmiri Kitchen took me straight back to my Bandra and the places we love there. Places such as The Bagel Shop, Gostana, Khane Khaas, the comparatively larger Candies, Bong Bong and of course Ling’s in Colaba and Bhojohori Manna in Oshiwara… places where we feel so at home, places where we feel that the food is coming straight out of our kitchen, places where a big part of the experience is chatting with the folks who run the place and the staff too.

As Marryam, Qamar and Pearl, the three beautiful Kashmiri ladies welcomed me I began to realise why Marryam feels the way she does.

The food in the Kashmiri Kitchen, I am told, is cooked by Wazas from Kashmir. Wazas are the cooks who cook the celebrated wedding Wazwan feasts in Kashmir. Marryam told me that the trade runs down generations and that you have to be born into a Waza family to be one. Apparently each family in Kashmir has its family Waza. When a wedding is fixed then the groom’s mother goes and checks if the family Waza is free. If not, she goes and tells the bride’s mother that the wedding date has to be changed and fixed according to when the Waza is free.

These Kashmiris have their hearts in the right place. 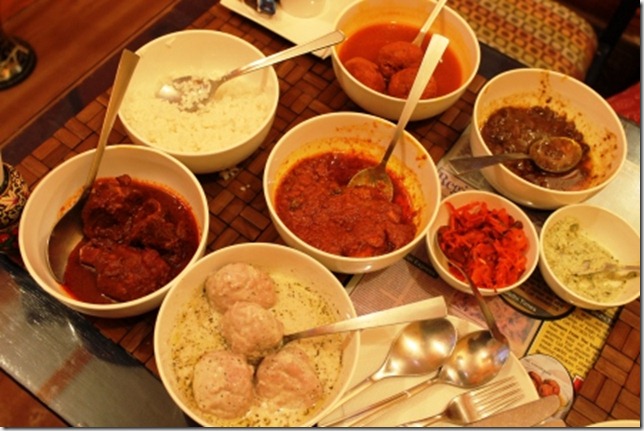 A Wazwan meal is quite extensive and expansive and loaded with meat. People in Kashmir apparently starve themselves for a day or so before a Wazwan meal. Honestly I doubt if folks like us in the plains would be man enough for the whole deal but being able to attend a full blown Wazwan meal would be a great experience I am sure. I did have a glimpse of it at Kashmiri Kitchen through a sampling of Wazwan dishes with Qamar and Pearl making you feel as welcome as I reckon you would be made to feel in a wedding.

The feast started with a sampling of kebabs that Marryam adroitly ordered and which to me were the sort of start to the meal that Saurav and Sachin would give to the Indian innings in their heydays.

There was the shammi kebab which was fried in ghee. The aromas of ghee taking me back to the Tiwari Brothers bus stop in Kolkata and the promises that the lovely aromas from the sweetshop would whisper in one’s ears while one waited in a packed bus. That night the promises were kept but strangely enough on a lovely canvas of meat in the Kashmiri Kitchen with food memories connecting two cities, two communities, two religions, two different parts of the country. 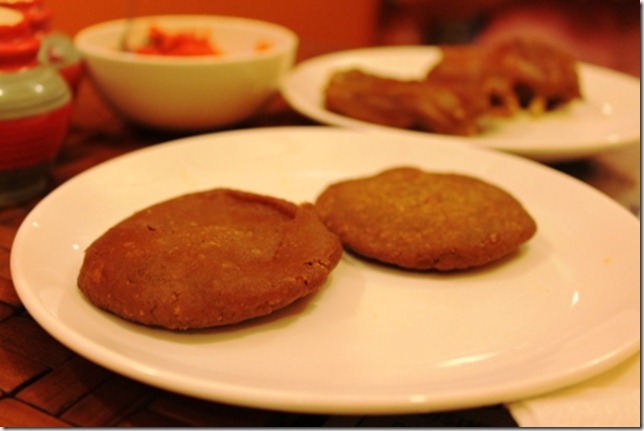 Next on were the sheekh kebabs which were juicy and packed with the flavour and aromas of meat. In Delhi the folks at Kashmiri Kitchen have to use goat meat over the preferred Kashmiri choice of lamb. Yet the aromas were that of lamb to me. Would this qualify as ‘molecular’? 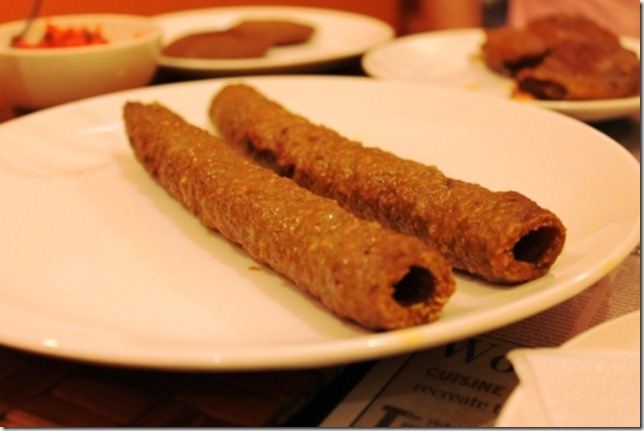 Then came the tabak maaz. Goat ribs fried in ghee. Again evoking memories. This time of the mangsho bhaaja (fried mutton) that I had had when I first came to Calcutta as a kid in more innocent times before red and ghee became bad words in the Bengali food lexicon 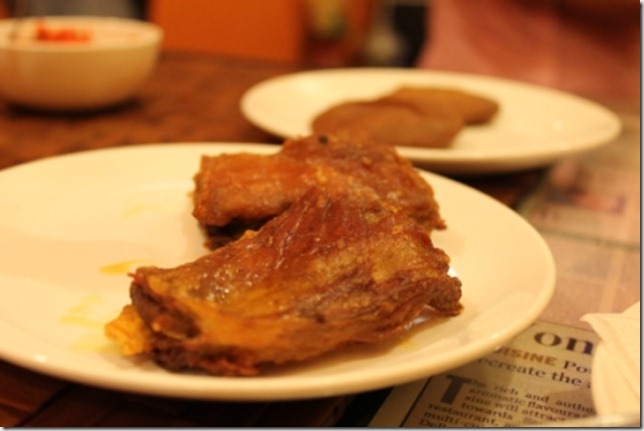 A vegetarian interlude followed. Rajma with soft, short, fat, chubby kidney beans which was quite delightful with rice.

All the mains in Kashmir are eaten with rice I learnt. Slightly sticky rice and not the basmati variety. They don’t eat rotis in the valley I was told. Fresh bread from the bakeries, on the other hand, is quite popular. 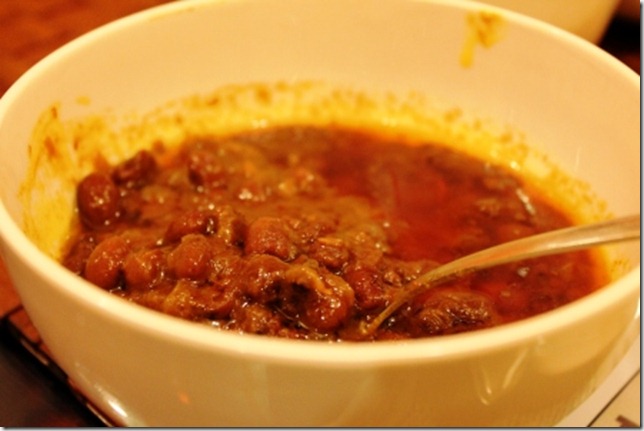 The next dish was paneer served in a curry which smacked with the sharp flavours of tomatoes. Pearl explained that the tomatoes are not ground in Kashmiri cooking. Instead they are often boiled whole, the skin then peeled as the tomatoes with its flavours intact are then blended with the curry. Sounded similar in essence to the way Italians make their tomato based sauces.

Then we were back to meats with fall of the bone mutton in a thick sauce…mutton mirchi qorma…Pearl told me that the dish is served drier in Kashmir but locals here expect more gravy in their curries. The dryish slow cooked mutton dish reminded me in cooking philosophy to the Bengali kosha mangsho. 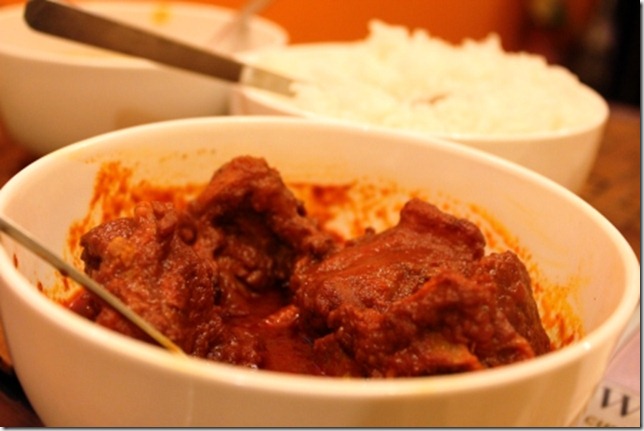 As Marryam wisely later pointed out to me, dishes are not invented, they travel. Our dinner at Kashmiri Kitchen, with the shared memories evoked, was such a splendid example of this statement

I was very stuffed by the last two dishes came but gamely went on.

First was the rista, the uniquely Kashmiri, stone pounded meat ball. The texture slightly spongy. Rare to get. Ideally has to be made with freshly slaughtered sheep. In Delhi the wazis of Kashmiri Kitchen recreate the magic of the hills with fresh goat meat. 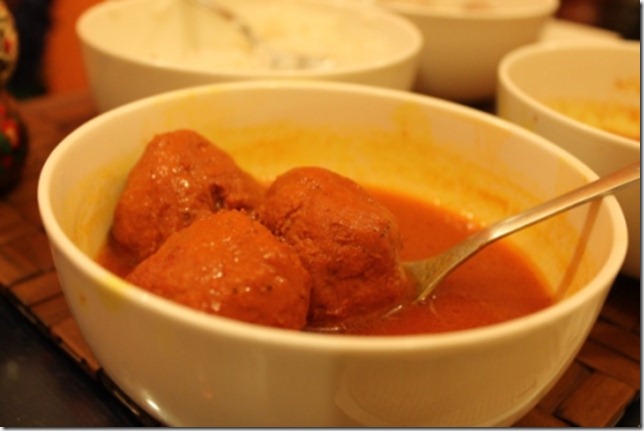 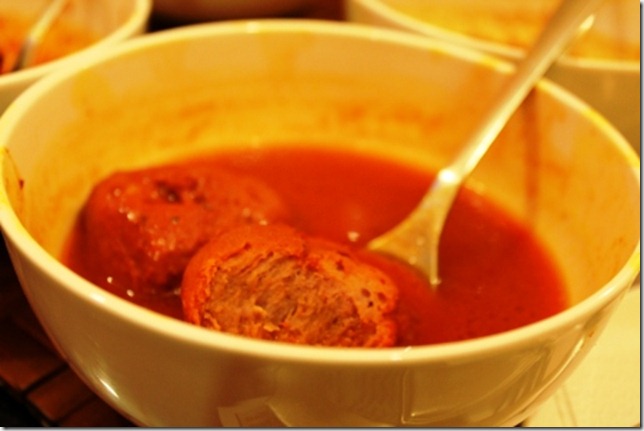 Rista’s consort is the gushtaba where the meat balls are cooked in a demure saffron kissed yogurt sauce. Marryam tells me that the serving of the gushtaba signifies the end of a Wazwan meal. 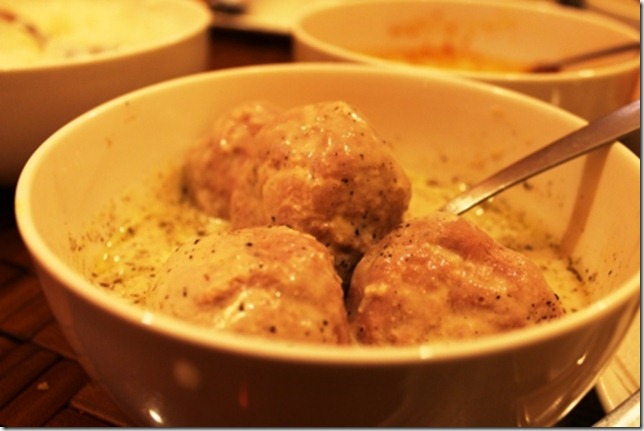 One cautionary note, some of the curries tend to get a bit salty so do see what levels work for you.

For desserts we had the firni that Mama Qamar looks into personally and for me were the high point of  a meal with many highs. The dish was packed with such love and warmth and was such a pleasure to eat before some fragrant Kashmiri kahwa tea to the end the night. 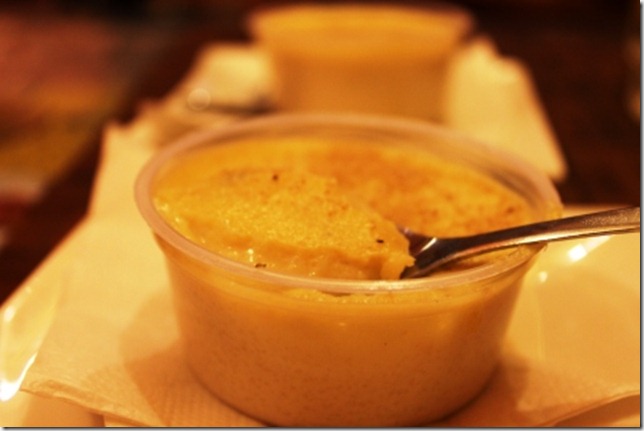 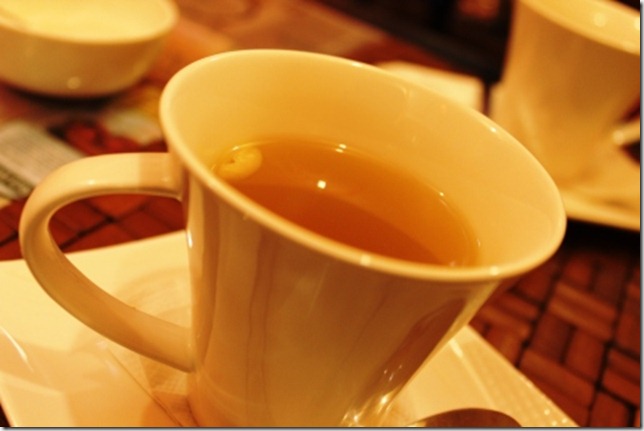 As Pearl went out of her way to very kindly drop me back at my brother’s through the dark empty roads of Delhi and Gurgaon, as Marryam began her long drive home, as I thought of the warm conversations that we had that evening, of the peaceful, easy feeling that oozed through the meal, as I thought of the food which was in a way exotic and yet evoked so many familiar memories, as I thought of the feeling of being at home that one had, I was no longer curious as to why a non-Kashmiri married to a Kashmiri could feel so Kashmiri at heart. 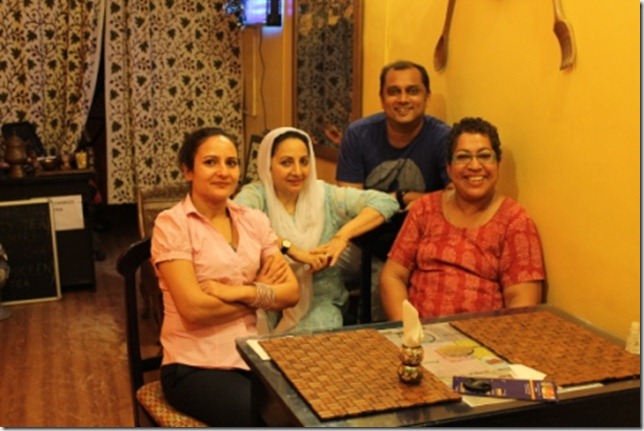 The dinner was hosted by Marryam