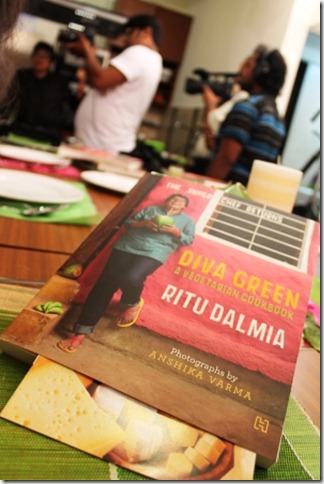 “Why are you here but? You aren’t vegetarian" said Ritu with a twinkle in her eyes and then, “but since you have come here let me give you a slice of pizza”.

I happily took my slice of pizza and munched on its incredible flavourful-ness and beamed at the way the supple pie bent in my hands. It had passed what I call the Finely Chopped Pizza Bend Test!

That was no surprise though come to think of it. I was after all at the Diva from Delhi, Ritu Dalmia's Italian cooking class. This was held at Rushina’s A Perfect Bite Cook Studio last week and was centred around the launch of Ritu’s new book, Diva Green. 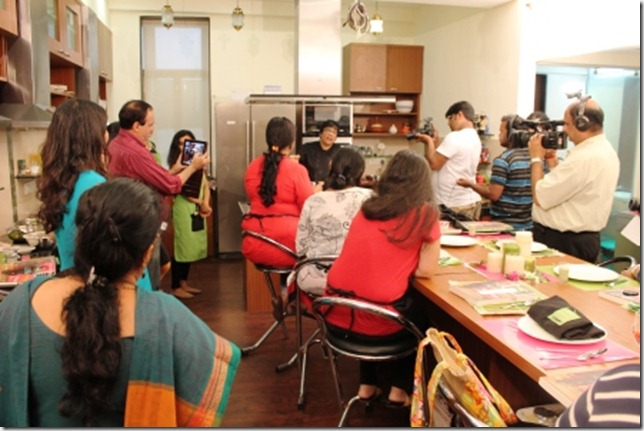 I’d met Ritu at Delhi last year over a dinner at her restaurant Diva in GK2. By then I was very keen to meet her after reading her near blog-like book ‘Travelling Diva’. When I say ‘blog-like’ I mean that there was a certain anecdotal, honest and personal tone to the book. The same disarming charm came through when I finally met Ritu after Marryam Reshii introduced us. Ritu and I met for the first time that evening. Yet, if you were a fly on the wall that evening, there would be no way that you would have guessed that we hadn’t met before as Ritu and I got along like a house on fire. Then again that’s Ritu for you, someone whose warmth is infectious.

When I met Ritu again on Friday at the class you wouldn’t have guessed that we were meeting for the after a year. Or that she was meeting most of the others in the room for the first time. The way she connects with people is amazing. If ever there was someone who should have been a professor it definitely is Ritu Dalmia. 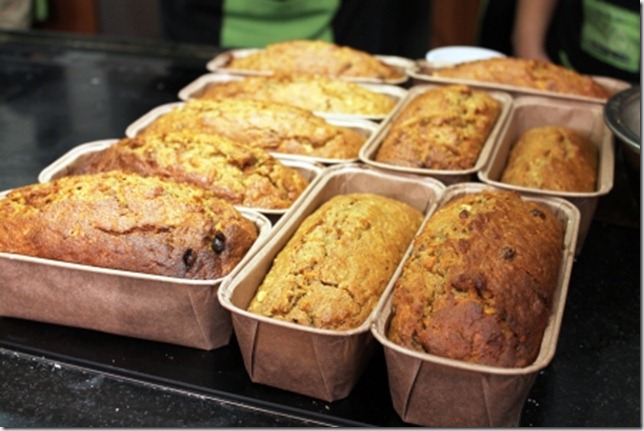 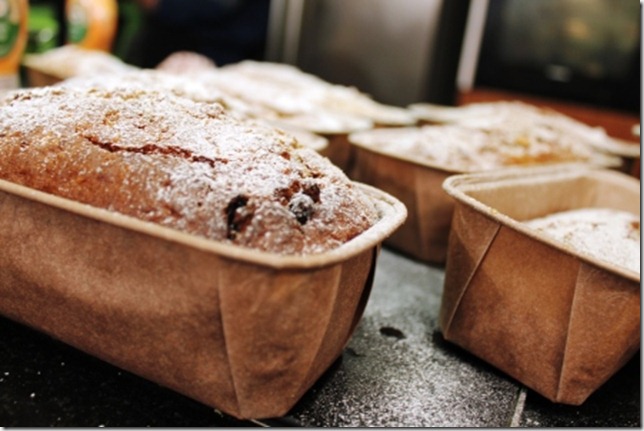 Ritu took us through 3 or 4 recipes from her new book and I later realised that the pizza she served us was probably the potato pizza one in her book. We did a carrot cake and I got to make that with Ritu even though the first egg she asked me to crack went all over the cooking platform! The carrot cake turned out to be pretty amazing and I kept munching on it over the next couple of days at home. We did a mushroom salad which tasted scintillating though I didn’t pay much attention, to be honest, on how it was made. She also made a pasta which was bit like a pasta master class and I hung on to her tips … ‘The French put white wine into their sauces, the basic Italian tomato sauce doesn’t have red or white wine’ and so on. 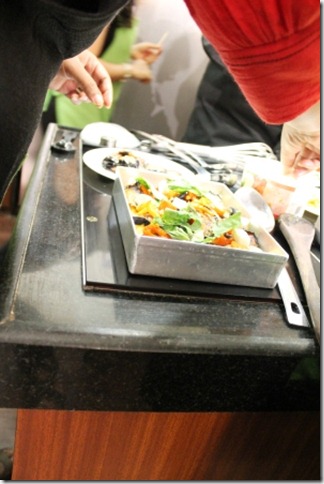 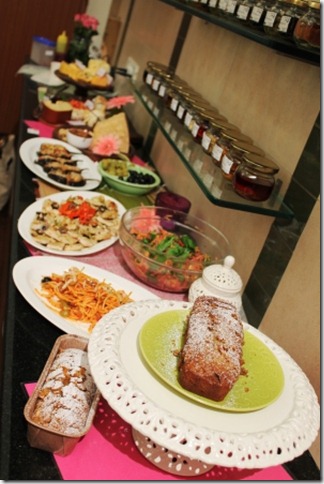 I had wanted to see Rushina’s A Perfect Bite Cook Studio for a while and managed to finally make it that afternoon. The studio turns one in a few days Rushina proudly told me. It’s at Saki Vihar Road which makes it a bit out of the way but then given real estate prices the location is understandable. Once you step in to the Studio you come across a very modern kitchen studio. A central platform surrounded by cooking stations on two sides and a platform for the instructor. A ‘Lust Pantry’ in the corner for ingredients and books that you might want to buy after the classes. The colours modern, bright and chirpy. A neat washing station & loo in the corner making it a pretty self contained cooking studio which I am quite sure is up to international standards basis the ones I’ve seen in Barcelona and Chiang Mai and the sort we see on TV. This is probably the first kitchen studio in Mumbai and full credit to Rushina and her team for putting this up and sticking through with their dreams. You can check their website for classes and activities that happen here. 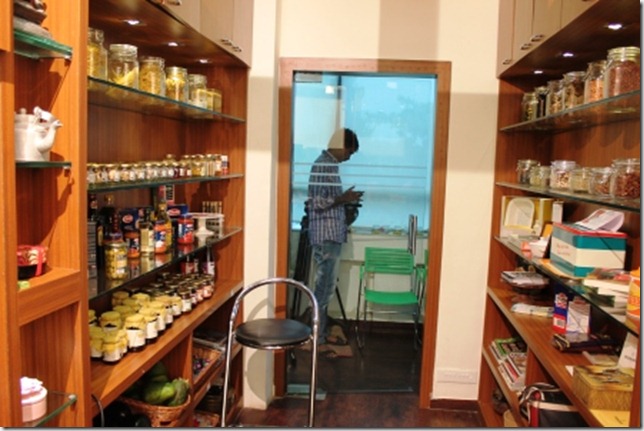 Ritu’s easy going and yet earnest manner made the afternoon engaging and enjoyable. Plus it was great fun to catch up with the lovely bunch of folks there. I met Saee and Harini from the first group of food bloggers in Mumbai. We were meeting after a while. Then there were the newer bloggers,, Pratishtha, Roxanne, Reema and Shanti with whom one had interacted on twitter but hadn’t really got a chance to meet before. Then there was Saransh of Food Food and Sameer of Food Bloggers Association. I also bumped into Monty of The Week whom I’d been in touch with over her article on food walks. Also got to meet Poulomi of Hachette India, Ritu’s editor, with whom I traded stories of Presidency, Loreto and of growing up in Kolkata.

The afternoon reminded me of the food bloggers meets that Rushina used to organise a couple of years back where we bloggers would get to meet and  get to know each other. I am talking of a time before restaurants and PR folks commercialised food blogger’s meets, for some frenetic marketing, leading to a situation where there are now often three or more food bloggers meets a day.

The afternoon with Ritu and Rushina at A perfect Bite Cook Studio was a throwback to simpler times and some of the pics below tell you how much fun we had. 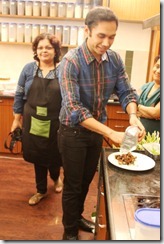 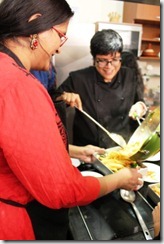 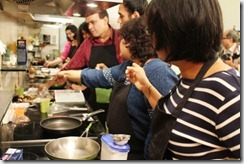 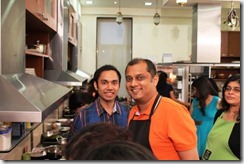 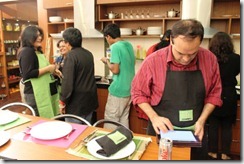 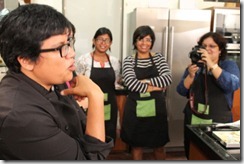 How is the book? 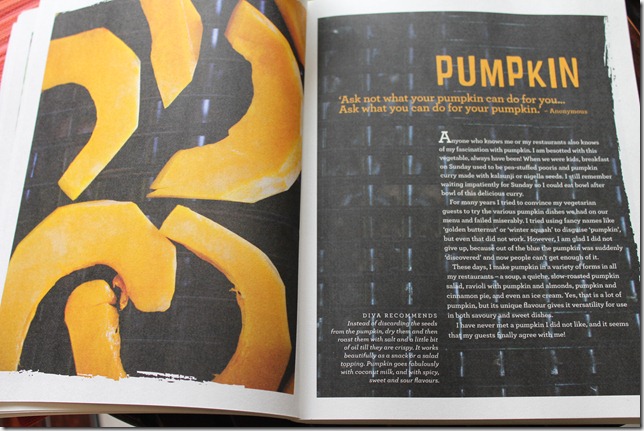 Well, Diva Green has an international feel to it with each recipe having a food photo of its own and the food styling in the book has clearly evolved with time when compared to the Travelling Diva. It’s the sort of book which once opened invites you to read on. Just as it happened when I saw a copy at Crossword earlier and dipped into it. That time I was amused by Ritu’s attempts to get a Bengali begun bhaaja recipe. She apparently discovered that no two Bengalis agreed on the perfect begun bhaaja recipe. Why am I not surprised? 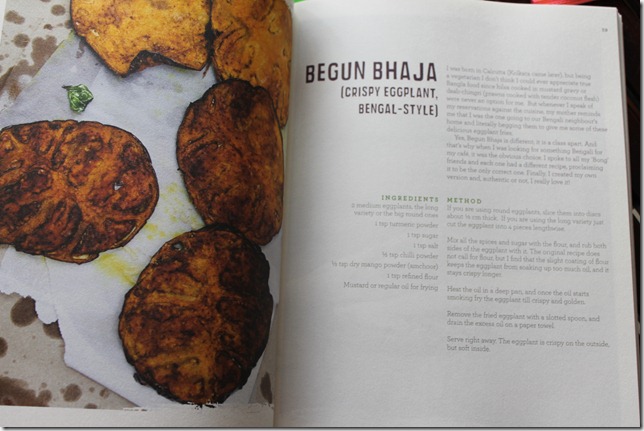 What makes the book appealing to me, once again like the Travelling Diva, is the blog-like writing style. Each recipe comes with an anecdote which reads exactly the way Ritu talks…chatty and interesting. Ritu has no problem giving the sources of her recipes or with sharing recipes from her restaurant…again very blogger-like.

The recipes are a mix of Continental and Asian ones and gives you ideas on what to do with vegetables. At the start of the book Ritu writes about increasing the proportion of vegetables in her diet with time and that’s something many of us are doing I guess these days. I haven’t really read too many of the recipes yet as my mind often blanks out to recipes. I am more a cook from your gut though what a book like this does for someone like me is to give a canvas of ideas to work on.  What I did notice is that most of the recipes in the book are pretty short and to the point. The recipes are unlikely to confuse one but if you ask me, seem to assume a certain amount of cooking proficiencies on the reader’s part and are not meant for absolute novices in the kitchen. 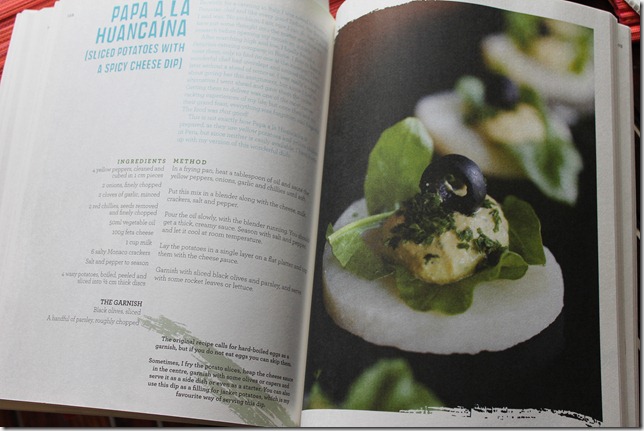 It was interesting to hear Ritu’s thoughts on bloggers that afternoon. She said that she has recently discovered the world of bloggers. She had no qualms in admitting that she draws on the variety of information that is there in food blogs and even said that some of her recipes are collected from bloggers.

Then she quipped with her trademark grin and wry humour, ‘The problem with blogs is that with blogs evolving soon people will stop reading my books!’

This is what Ritu had to tweet about the afternoon and us Mumbai bloggers later that night:

Chef Ritu Dalmia ‏@chefritudalmia 20 Jul @ScrollsNInk @Finelychopped @Saeek @APBCookStudio Thank you guys.. I had a fab time with all u guys. I think I like Mumbai bloggers. 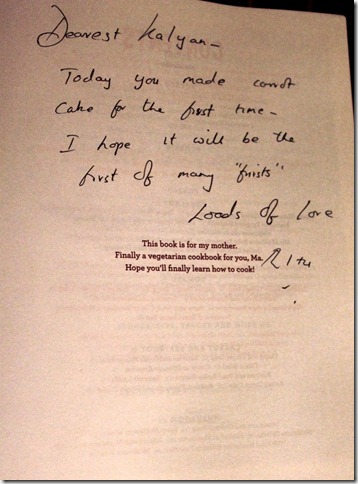 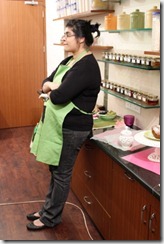 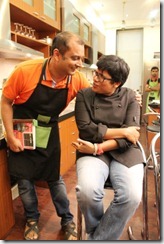 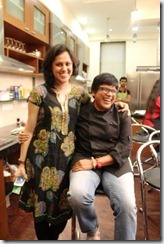 Sassy Fork said…
Sure look forward to meeting Ritu someday!! Till then awaiting "Travelling Diva" on TV
25 July 2013 at 07:46