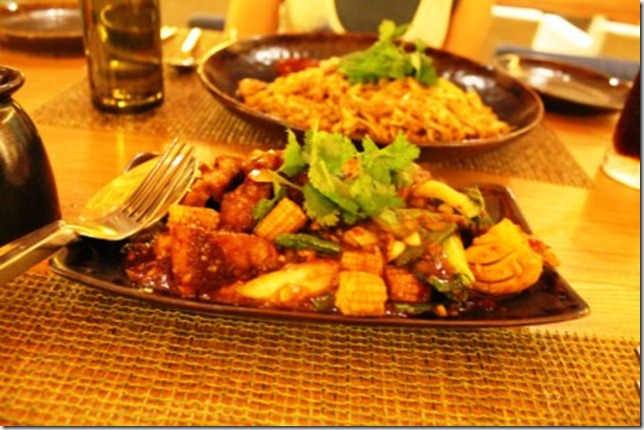 Looking for somewhere special to go for dinner we went to San Qi (pronounced chee) at Four Seasons last night.

K was treating as it was her birthday and I was in the mood for something Asian. We had gone to Four Seasons earlier in the day too and that’s when the idea of going to San Qi struck me. Thanks to the Sea Link, Four Seasons is quite well connected with Bandra, and the drive is not a drag.

We used the spa at Four Season which is now highly recommended by us as a way to relax and unwind in the city and pamper yourself. This is the sort of stuff you see on Discovery TLC luxury shows and for a couple of hours we felt really special and good about life. Mr Martin Hilton (!) the spa director and his team run a great operation there.

San Qi was shut for lunch by the time we finished at the spa. So went to Cafe Prato, the coffee shop for a excellent goat cheese and caramelised onion pizza. The pie was very supple and bent perfectly which is my test for a good pizza crust. The tomato base of the pizza was a tad too tangy for my tastes but the goat cheese and onions combined very well. It was a 13 inch pizza and cost around 900 Rs but then one was at a 5 star coffee shop. The service was pretty good and though we ordered one ice tea they got us a complimentary one. Once they figured out it was K’s birthday, possibly from the spa folks, they gave us a fantastic, pastry sized, dark chocolate mousse cake. 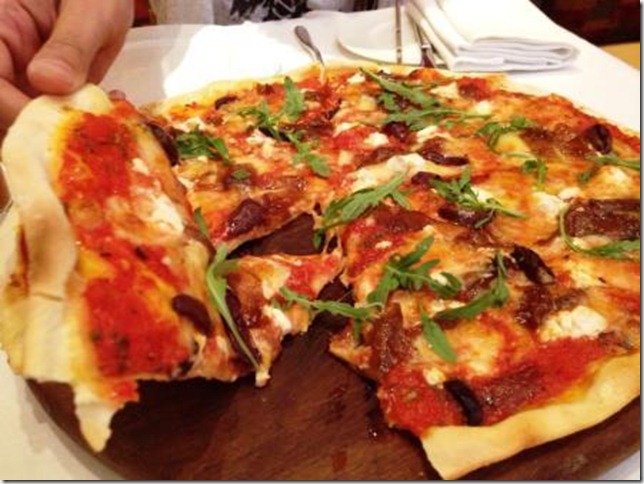 We went back in the evening to San Qi. The drive down the Sea Link at night from Bandra was quite pleasant. We had been to san Qi a few years back and the decor remains the same since then. We once again chose the upper section to sit at. The lower section has the Indian kitchen and I just felt that it would be funny to get the smell of Indian spices from the open kitchen while eating Asian food.

My only problem with the ambience at Sani Qi was that it was too dark and they erred on the wrong side of calm and cosy. You do want to see the food you are eating after all. Plus how do you photograph your food before eating! That’s such an important ritual for many today. Very inconsiderate. As was thrusting a bottle of mineral water and charging you for it. Surely a 5 star has water filters? 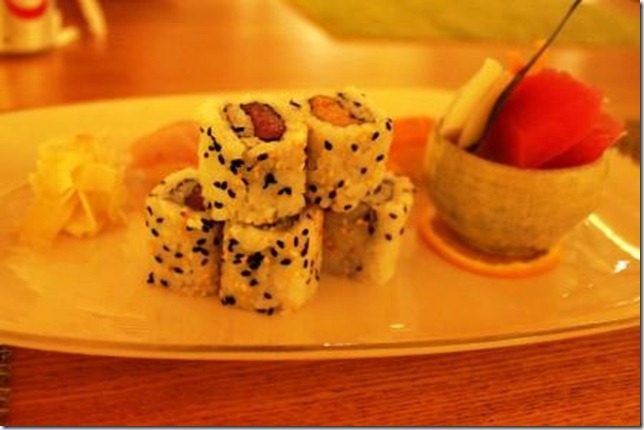 I was in the mood for sushi and we chose the Pacific sushi and sashimi platter. I liked the fact that sushi wasn’t ice cold and seemed freshly made. The chunks of fish were substantial. The sushi at San Qi compared favourably to the ice cold with barely visible fish of the sushi of the Shangrila buffet down the road. One could of course argue that the sushi in latter is from a buffet which is normally the graveyard of eating well while San Qi is a la carte and more expensive.

K, who recently had the sashimi at ITC Sheraton Delhi, felt that the sushi in Pan Asian there was fresher and tastier than the one at San Qi.

For mains I scoured the menu for pork. There was nothing in the Japanese and Chinese sections. The tasting menu of yore was gone and the steward didn’t know about it. We tried the tasting menu on our last visit and had some good pork then. The Thai menu this time had a crackling pork belly with chilli paste. I am on an anti-reflux no chilli diet right now. On asking the steward found out that the chef could do us a completely non spicy version of the pork.

The Indian chefs of the Thai kitchen did a pretty good job of the pork. I was a bit scared by the chunks of baby corn when the dish was got to our table. At the end it turned out that there was quite a bit of pork and in fact we couldn’t finish it entirely. While the menu said ‘crispy’, the belly was well cooked, reasonably tender. Not crispy. I didn’t have a problem with that really and we both enjoyed the texture of the meat. It was cooked in thickish sweet possibly soya based sauce. There were some beans in the dish but not really crunchy enough to give a contrast to the pork. At the end you were left wondering whether they needed to have added so much of foliage as it neither added nor, thankfully, detracted from the pork. It was too dark to see if the veggies added to the prettiness quotient. 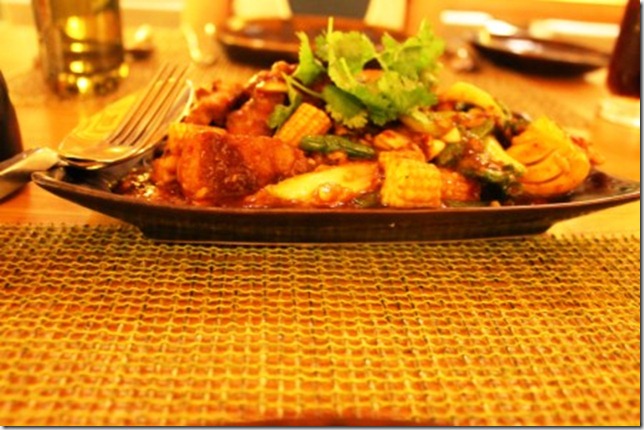 Along with the pork K chose a pad thai. The san Qi pad thai definitely turned one of the best pad thais that I have had in India. What we both loved was the texture of the noodles which was firm and not sticky.

I am still recovering from the chilli powder laden cloggy noodled pad thai and rubber pellet-like pork belly of a place called Wokamama in Gurgaon. The belly at San Qi and the pad thai, no doubt more expensive of course, helped restore my Wokamama- frayed nerves. I know I keep stressing the expensive bit but then I guess that is to be expected in a 5 star. The good thing is that the food lived up to the prices.

At San Qi they gave the chilli flakes (not the Wokamama mirchi powder thankfully) and peanut powder on the side with the pad thai. This was a prawn and chicken pad thai and the juiciness of the large prawns awed us both. I liked the bites of fried firm tofu too which took me back to Thailand and Malaysia. 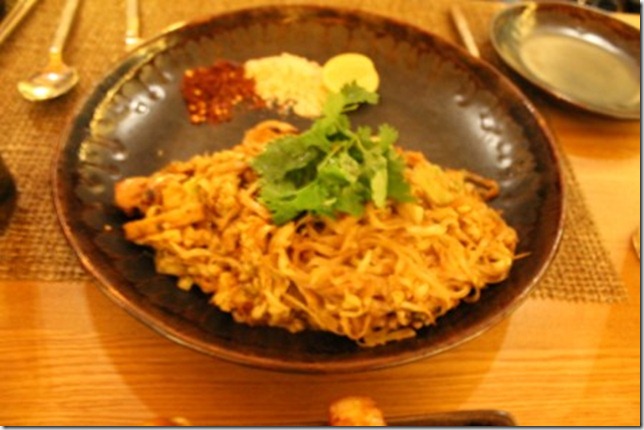 The Indian chefs at San Qi definitely deserve a bow for the great pad thai that they put up.

Was I happy with my choice of San Qi. Yes, we were pretty pleased though would have been nice if I could have seen the food a bit more. The aromas and tastes were all good though! 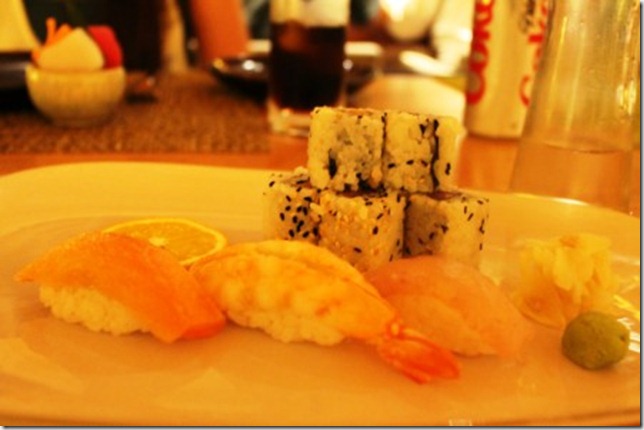 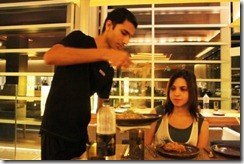 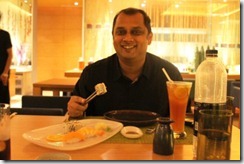 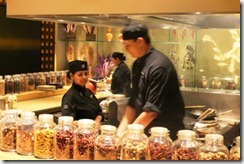 We we got one more of the chocolate mousse birthday cakes. K had half of that as she was saving herself for the rest of the celestial dark chocolate macaron cake that Pooja Dhingra of Le 15 Patisserie sent for her. K had this cake two years running on her birthday and just loved it. The macaron cake is a work of genius. The chocolate inside would make any chocolate lover go weak in their knees and the slightly nutty macaron casing is pretty ethereal too. I finished off the white chocolate disc. This year when I went to pick up the cake I found out that the cake was a gift from Pooja and the Le 15 team to K. A really sweet gesture which will make me feel a bit embarrassed to order it next year but chances are that I will for this cake makes the lady smile wide. 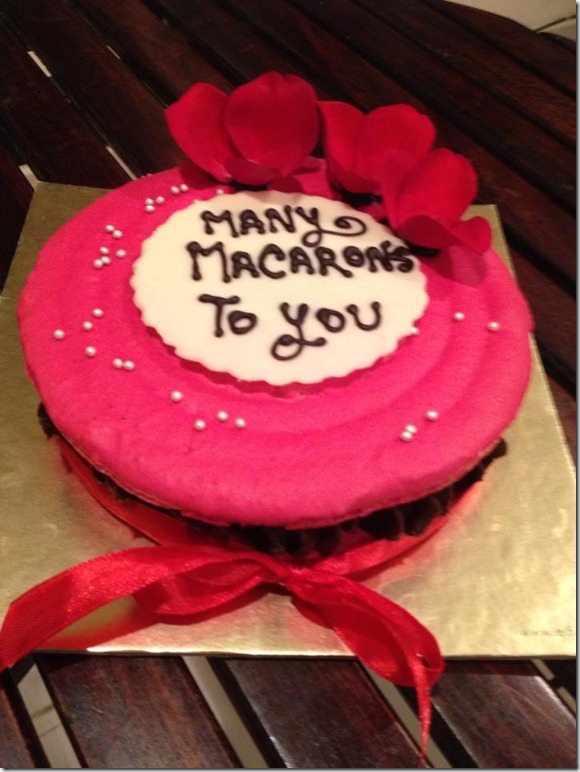 This is the link to my Thai green curry post on www.liveinstyle.com

Talking of meats, my article on my Meat Map of London came out in The Man’s World Magazine in July. 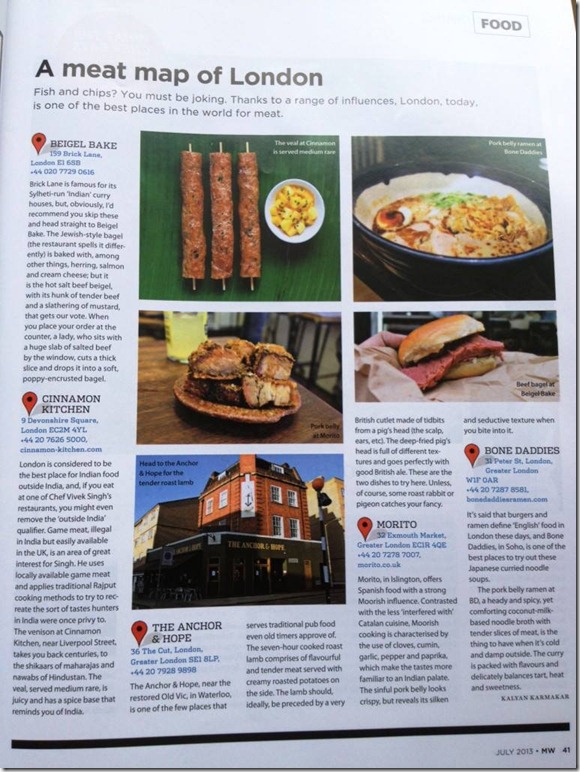