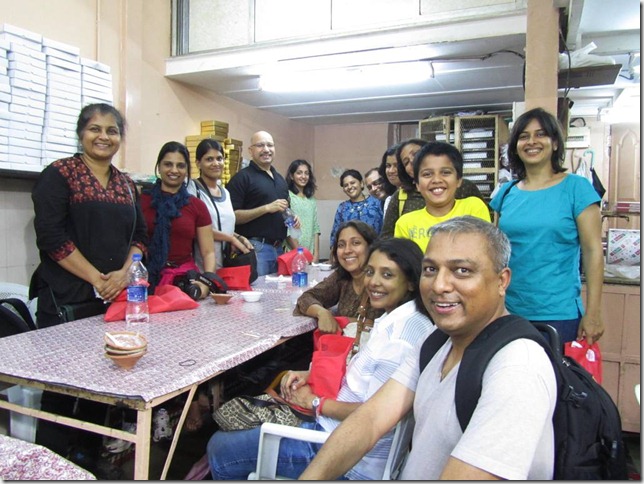 This was the largest group ever on a Finely Chopped Walk and I was a bit nervous to be honest as I set off for Bohri Mohalla last Saturday evening.

At the end we had 16 people with 1 more person not being able to make it. At one point our group was supposed to hit 20 plus but a group of 4 which was insistent on booking a place didn’t turn up. You get used to this after a while. Last minute no shows screw up the planning and block the spots others but you learn to live with it. Like I keep saying the great experiences I have had keep outweighing the odd sour notes. This was  good in a way because 20 would have been too many people and I had already had to say no to a few as the walk was over booked.

In fact I hadn’t planned to do this walk, just a week after the previous Bohri Mohalla Walk. I changed my mind after it turned out that I couldn’t accommodate everyone in the last walk.  When I had started the walks the idea was to do it with about 6 to 8 people so that you can recreate the feeling of being in a group of friends. Plus in a place like Bohri Mohalla you are never too sure about the number of folks who can fit into a place. I was wary of the group being too large and people not having a good time because of that. Then we had 15 last time and then 16 this time!

At the end everything seemed to fall into place beautifully. The traffic was very clear to start with and I reached Bohri Mohalla pretty quickly. The rains had just stopped and unlike the previous week the lanes there weren’t mucky this time. Even though we were towards the end of Ramzan, the larger crowds were at Minara Masjid and we had enough place to move around at Bohri Mohalla.

Our first stop was Taj Ice Creams at Bohri Mohalla where we got to meet the very diverse members of our group which included one very smart 11 year old boy and one vegetarian (!) lady (she said she loved photographing food) and I must say that they both were very sporting and enthusiastic through the walk. There were 4 corporate lawyers led by Anchal who has been a big supporter of the walks and has come to most of them. She couldn’t make it last time so here she was with her friends, two of whom had come for an earlier walk too. Apart from lawyers we had a government official, real estate corporates, people in education, a doctor, a travel hostess and folks in the corporate world. There were some like Vidya and Kaustav with whom I’d been in touch on facebook and twitter and whom I finally met outside of the virtual world. Then others such as Surbhi, Piyali and Yeshwant who had just got to know about the Walks. Anjali, who missed out last time, and it was because of her that I thought of doing a second walk to fit in those who couldn’t make it last time. There were some folks who had got in touch towards the end and whom I managed to fit in including Hema who said she missed the first one last year and has been wanting to make it to Bohri Mohalla since then and Madhavi who called up just the evening before. I felt great that things worked out as there was no more time left for another walk with Eid now on the anvil. 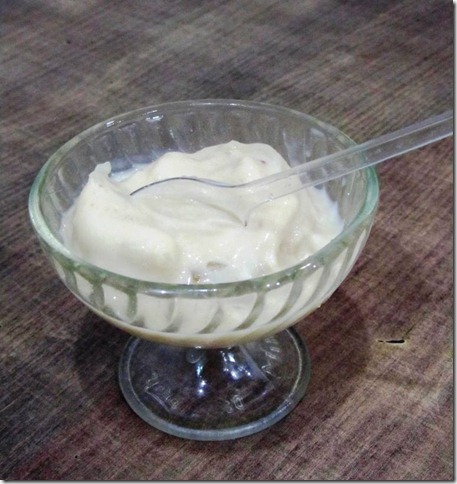 Taj Ice Cream to me is like the Home Dressing Room thanks to the hospitality of Hateem Uncle who this time got the barrel in which the ice cream sancha is frozen for people to see. After the last walk, Vipul, who went back to Taj praised the mixed fruit ice cream to me so I tried it this time. You could taste each individual fruit in it…strawberry, banana, litchi, sitafal…no wonder Taj ice creams are my favourite ice creams in Mumbai. 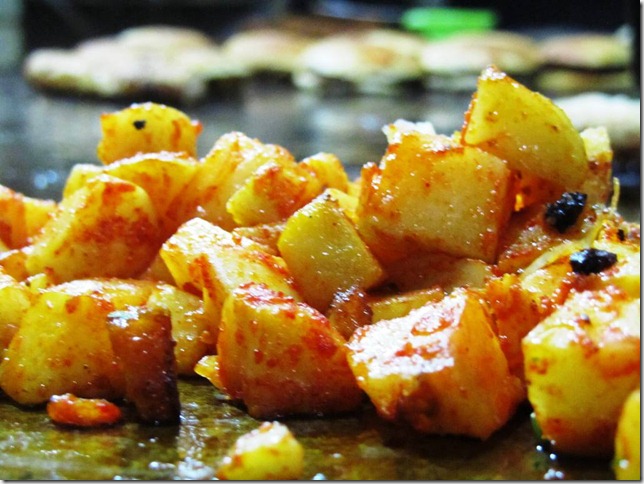 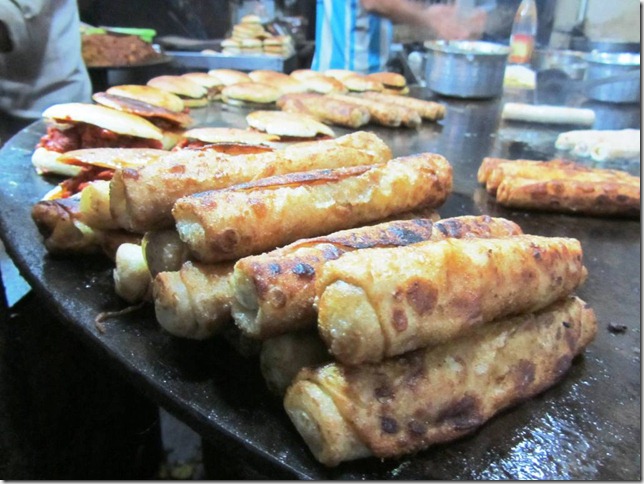 Next stop, next door to India Hotel. A tiny boy named Shabbir took our order as our large group settled down by an aluminium table on plastic chair by the pavement. Much to ,y surprise the little ustaad got our orders all right…Karcahi styled chicken rolls, martabak and Moghlai paratha like baida roti, naan sandwich and then a demo inside on how to make bheja (goat’s brain) masala followed by a tasting. I ordered a tava alu for the vegetarian in the group and everyone pounced on them and agreed that they were quite tasty. 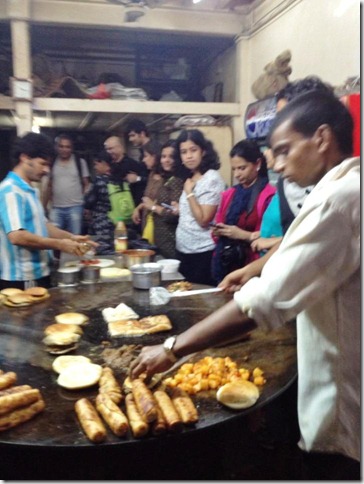 The Bohri Mohalla walk doesn’t involve much walking and we crossed over to Haji Tikkas. There was only one plate of the hallowed khiri (cow’s udder) left and everyone sampled a bite of it and was left for hungry for more. ‘More’ came in the form of beef boti or charcoal grilled chunks of beef which combined beautifully with the lachha maida parathas and, as Anchal showed us, with the fiery chilli & coriander chutney. 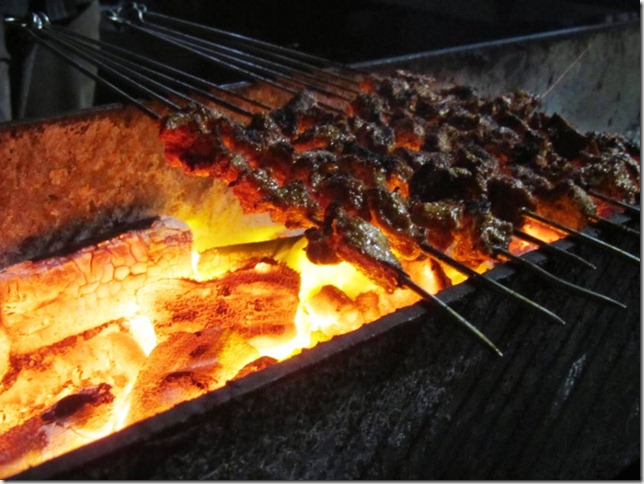 Then came the ‘walk’ bit. All 4 minutes of it to Valibhai Payawallah two lanes away.

Remember I said that everything fell into place perfectly during this walk? Well our timing for Valibhai’s was right this time as it was 10.50 and we had only 10 minutes to wait before the Ustaad started removing the stone slab under which the vessels were simmering and began his alchemy. He also answered the questions of the people in our group about the bara handi process. In the vein of things going right we got three tables in the front where everyone fitted in. I stepped out as the restaurant was too full and managed to take care of the ordering through remote control. My orders at Vallibhai … topa (ox hump) and chhote ke paya (goat trotters) nalli (marrow) maarke and loads of rotis to go with them with express orders to be careful not to burn one’s fingers in the hot curries. 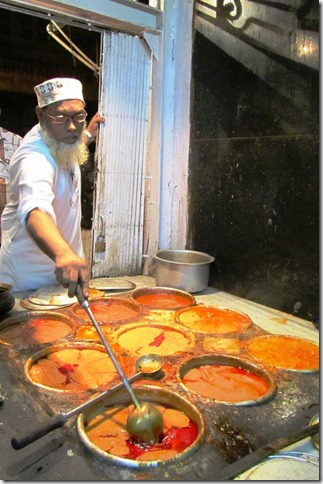 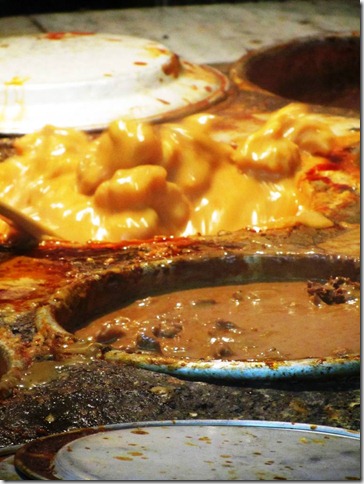 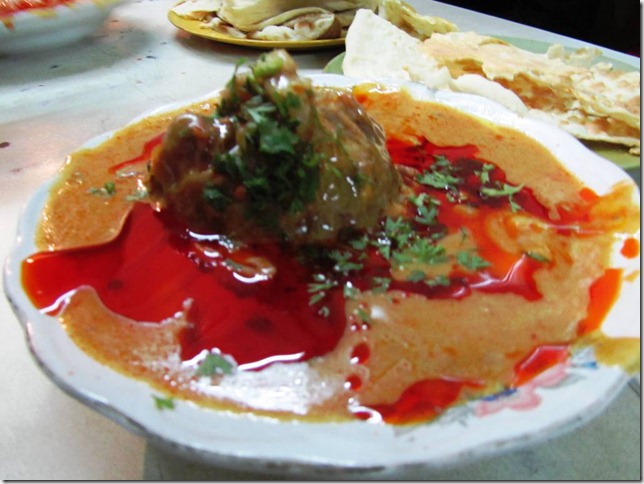 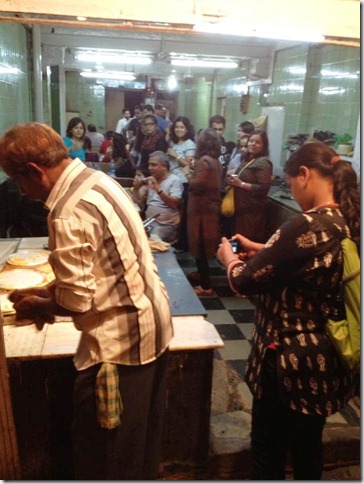 That’s Piyali clicking away in the black salwar

Thankfully everyone seemed happy and well fed even though I managed to go in and check just a couple of times. By then the disparate members of the group had all come together to become friends. We retraced our steps to the Taj ice cream lane. We started with a Bohri Place and ended with another, Tawakkal Sweets where the owner welcomed us in a with a big smile. Once again, a table opened up and all 17 of us got to sit together. Hamid who, like everyone else at Bohri Mohalla, is used to us managed our table adroitly. He got our malpuas and malais and firnis, this time I insisted on white ones, to the table. He had kept the goody bags packed adding the mava pans from Tawakkal to the patrel farsan I picked up from Firoze farsan earlier. 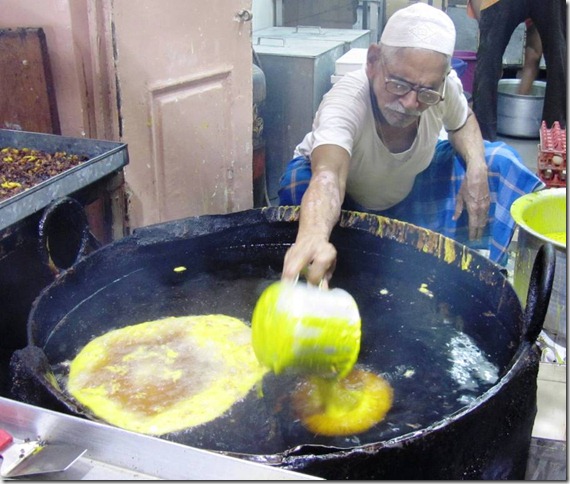 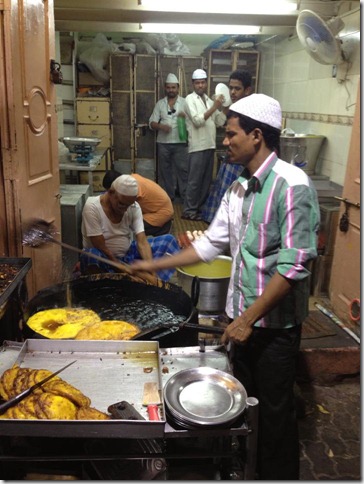 The group said bye and made their way home. I stepped out and began to look for the car among the frenetic Ramzan crowds coming from the Minara Masjid lane. The road seemed like a frenzied whirlwind after the calm waters of Bohri Mohalla.

As I headed home mails began to hit my inbox…from the folks in the walk who were in a post Bohri Mohalla euphoria. It was a moment to feel thankful and reflect on the journey so far. It was just last December that we started the walks, coincidentally at Bohri Mohalla. It’s been less than a year since then.

Some feedback on this walk and a big round of thanks to all those who came to the walk :

Kaustav Roy: Thank you so much. Pritish and I had the most wonderful time - great food and fantastic company. And most importantly to be able meet you in person.

Piyali Dasgupta: This was a very good experience coming for the walk. I hope to be able to do more of these soon.

Vidya Sinha on facebook: A yummylicious food walk, organized by the famous food blogger Kalyan Karmakar, where there was food, food and some more food, along with other foodies as excellent companions! We spent a few happy hours, in the Bohri Mohalla, amidst the festivities of Ramzaan, having such a memorable experience! 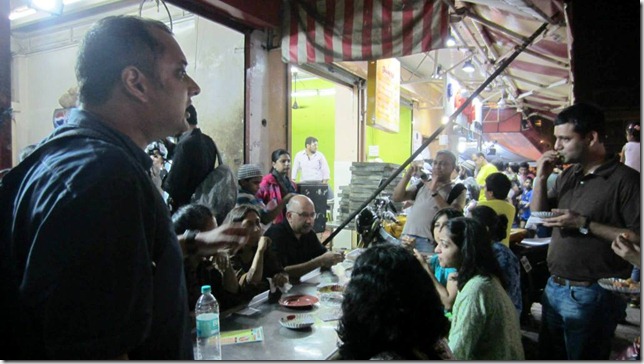 Pic by Vidya Sinha at India Hotel. You can see the other pics she took here