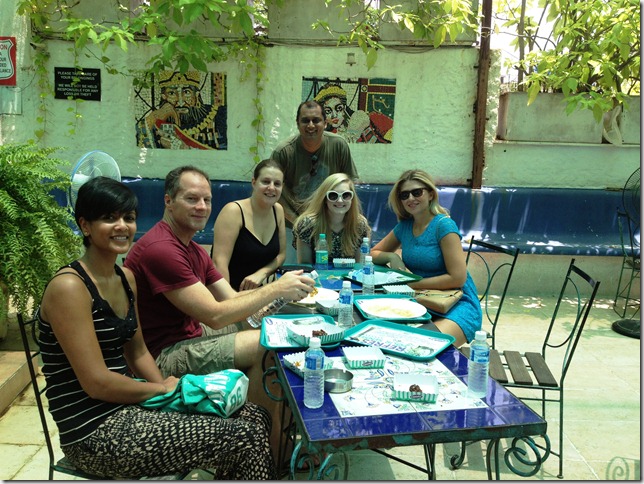 I had no idea that the Finely Chopped Walks had featured along with the Hanging Gardens, Crawford Market & Rhythm House as things to do in Lulu Grime’s feature on Mumbai in UK’s Olive Magazine! 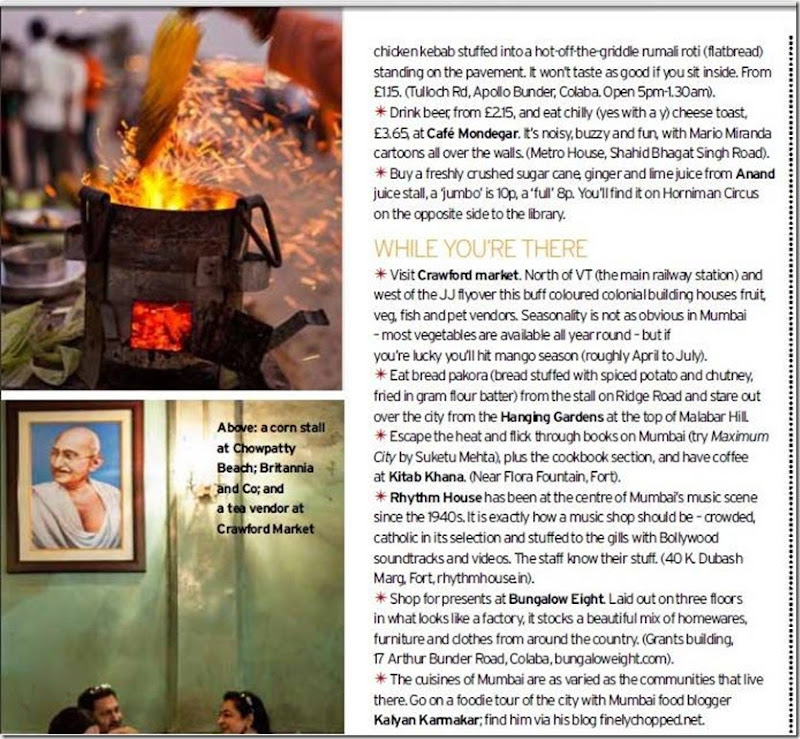 I got to know about the feature when Imogen, who works with Virgin Atlantic wrote in saying that she had read about the Finely Chopped Walks in the Olive and would like to do one on their day of furlough at Mumbai. I was really excited as Olive is probably one of the biggest food magazines in the UK.

We made plans and a couple of days later Imogen and her colleagues from the Virgin Atlantic crew made their way to Bandra from their hotel at Andheri E for a Finely Chopped Food Walk. The walk planned was a variation of the earlier Legends of Bandra Finely Chopped Walk.

They had landed after midnight and yet the crew members and the pilot (whose son writes a food blog on chocolates) looked pretty fresh when they landed at Candies at noon. I was there to welcome our guests from London and Joburg to my adopted home of Bandra.

Candice of Candies kindly made sure that things worked like clockwork and Sylvia at the counter deputed two of staff to get our food orders up to the terrace where we sat. The folks in the walk looked quite awed by the scale of Candies and noted the Gaudi inspired curves and mosaic that Allan has done at the cafe. I decided to go with a menu which was uniquely Mumbai and Bandra and different from most things that our walkers would have tried before. So at Candies my pick were the Goan mutton potato chop, from the Pereira family recipe, the classic Mumbai green chutney sandwich and the sticky brownies. I felt really proud to see the way the Candies food was relished by our guests.

We then walked down Pali Market with a stop at Vijay Stores. This turned out to be a half an hour saffron, garam masala, panch phoron, chilli powder, coriander and cumin buying stop. 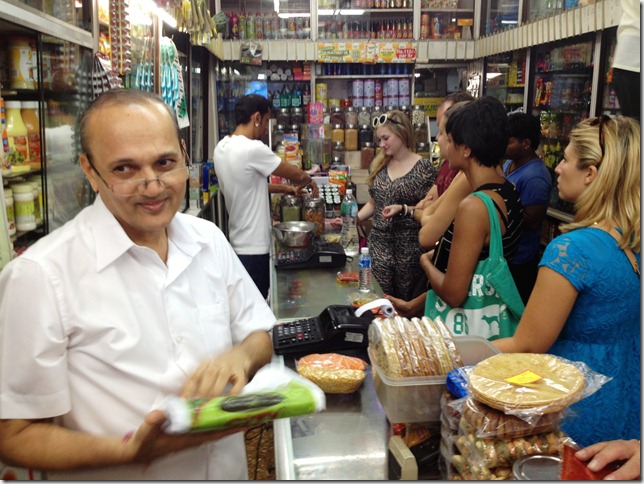 Next on was Punjab Sweets with their promise of ‘mineral water only’ chaats. We couldn’t have the flight leaving at night without the crew could we? Punjab Sweets has an array of chaats but my pick were the uniquely Mumbai sev puri and bhel puri. 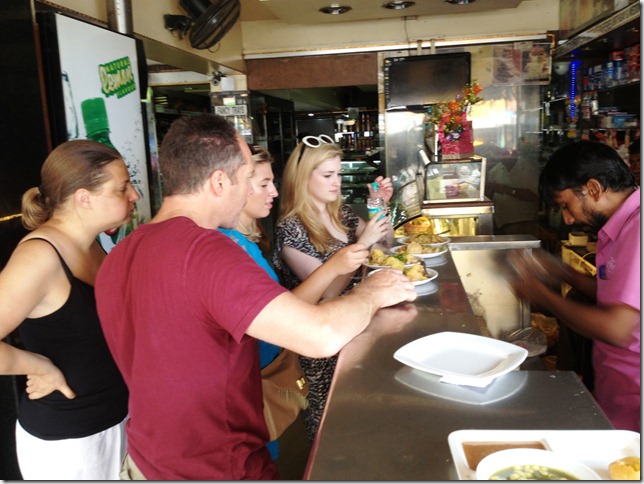 From there we walked down to Sai Sagar where the crew got a glimpse of the Mumbai fast food phenomenon of South Indian Shetty restaurants. The idea was to introduce our visitors to the many splendored world of dosas. I chose a masala dosa, which one of the walkers from SA was familiar with,  spinach dosa, onion tomato and chilli uttappa and a (slightly burnt) rava onion dosa. I think the rava onion and the spinach were the two crowd favourites as was the soothing blast of the aircon after walking in the sun on a sunny day. 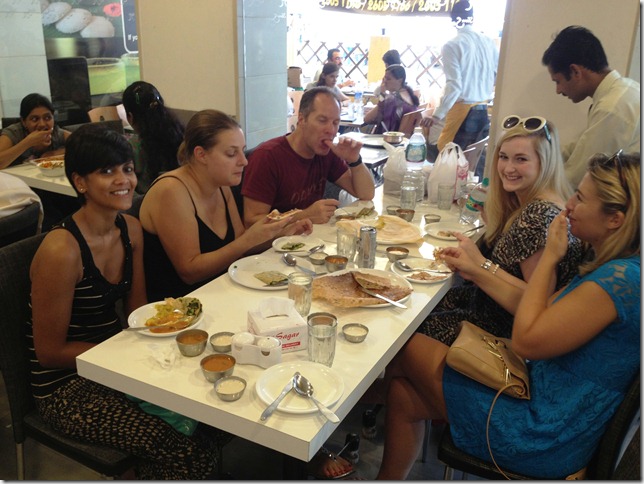 Last stop was Khaane Khaas with Hardeepji of Khaane Khas waiting to welcome us. He got the folks to see a demo of the rumali roti being flipped while everyone sipped on their lassis. We had an assortment of rotis along with the black daal and I must admit that I couldn’t stop munching on the cheese garlic naan which I tried for the first time. The show stopper here was the tandoori chicken which won over even those who had had tandoori chicken before in life. Hardeep very kindly offered us some rabdi before we left.

The goody bags were a mix of mithai and mishti from Sweet Bengal. 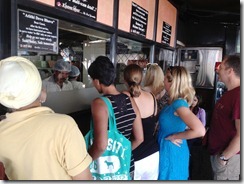 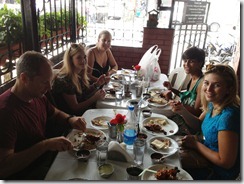 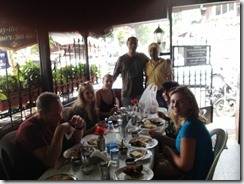 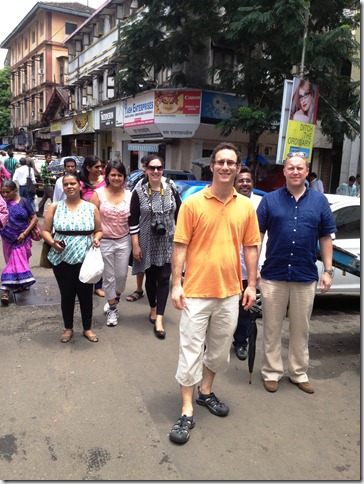 A few days back I did a Finely Chopped Walk at Fort.

Fort is where I’ve probably done the most number of walks if one includes bespoke walks and shooting for The Foodie. The second Finely Chopped Walk and the first this year was at Fort and this was my second group walk here.

We had an interesting mix of people. Someone who has lived in Mumbai for four decades, folks who had come from the Eastern and Northern parts of the country and were looking to explore the city, two expats who have now spent a year or so here and are trying to get to know their new home, someone from Powai discovering South Mumbai and someone from Melbourne who actually postponed his return home from Mumbai by a day to make it to the walk! Last time in Fort there was someone who took the train in from Pune just to come for the walk and then went home and now this incidence of an overseas visitor postponing his return.

I can’t say how thankful and encouraged one feels by events like these. 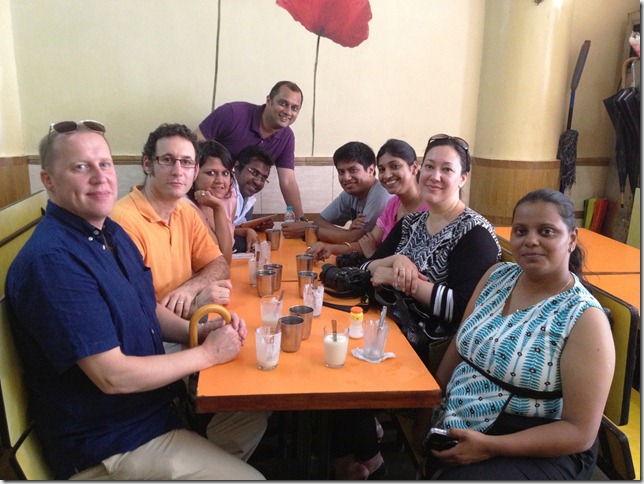 At Fort we retraced the path of the of the Foodie Shoot. First stop was Bombay Store where we did the intros before we moved on to Yazdani with bun and brun maska with Irani chai, khari biscuit and a visit to the bakery. Next stop was Moti Lassi where we got our milk moustaches malai maarke. From Moti it was a stroll down to the Khao Gulley with a coffee buying stop at Philips and Co. We also stopped on the way at the St Thomas Church which is the oldest British built church in Mumbai. The architecture inside is really amazing. 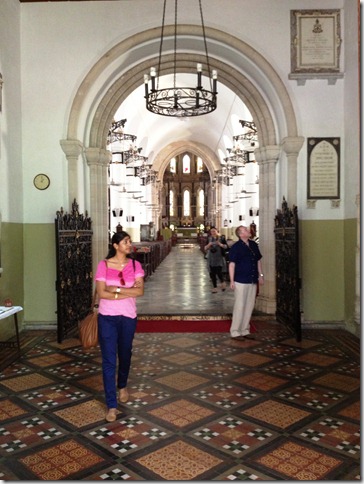 The pao bhaaji and mixed kanda bhaaji were what I chose at Khao Gulley. Those who had tried these dishes elsewhere admitted that these were some of the best renditions that they had tried. Street food done we headed to Pradeep Gomantak for some fresh bombil fry and sol kadi. The sol kadi was served warm here and was incredibly fragrant with the flavours of curry leaves, ginger and chilli giving it a wonderful kick. 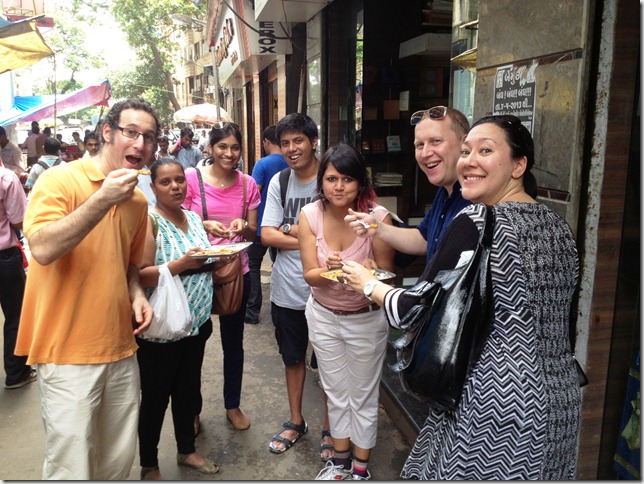 The Gomantak fare of Pradeep was followed by Ideal Corner. Coincidentally Ideal Corner featured on TV on two successive weekends. First the Foodie Fort Walk show and the Saturday after on Aneesha Baig’s excellent Parsi new year special. We went for an eclectic mix of akoori, mutton lacey cutlets and sali boti at Ideal Corner washed down by raspberry. 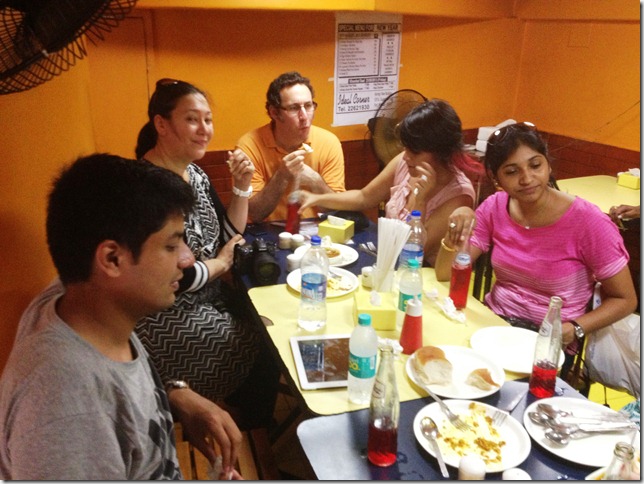 Which primed us for our last stop. Vidya Diary and it’s jalebis and the goody bag featured peda and papdi from there. 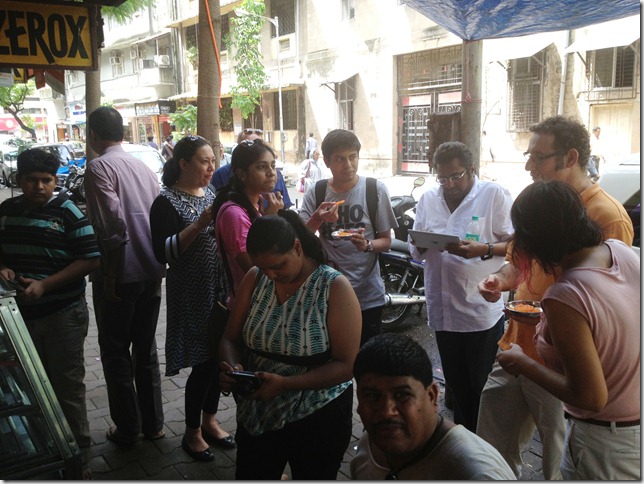 It’s been a fantastic experience taking people around some of my favourite spots in Mumbai. Introducing folks to the people behind the restaurants. Trying out their dishes. Seeing my love for my favourite dishes here reflected on the faces of those who come to the walks. Getting to know a wonderful set of curious and very open minded folks who come for the walks. One just can’t get enough of this as far as I am confirmed.

I am continuously on the look out for new stories, new hidden discoveries, planning more walks.

Sassy Fork said…
Did Julia try the Sol Kadi again?
Must go and see the Gaudi inspired architecture at Candies
25 August 2013 at 12:02

Anonymous said…
Can I join next food trail in mumbai? I am from Mumbai but needless to say curious enough about food, e.g, ready to go for 25 km just for best kheema served in Olympia colaba from my home Bhandup :-) ...please let me know at vinaysg@yahoo.com
11 December 2013 at 10:10