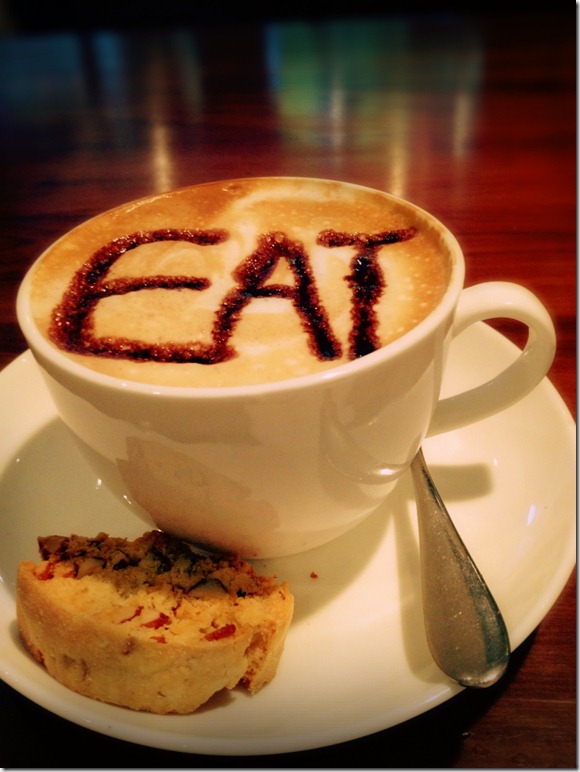 There’s something about the look of the place from outside which made me want to try out Eat Deli Cafe at Bandra’s Pali Naka.

This newest addition to the Bandra cafe scene is also the n’th food place at this spot beside Solanki Medical. There was a bread place before and a chocolate place too and possibly some others as well. Yet waiting to see a place which is able to hold on to its ground here. Will Eat Deli Cafe break the jinx is the question? Well hopefully they will.

I made plans with Sandeep to go to Eat Deli Cafe for breakfast on Sunday. I had checked  with @thebigbhookad on twitter who told me that the all day breakfast there was good.

Sandeep landed up at 10.30 am and found that the place was shut. We ended up going to Eat Around The corner where he ordered the Foul Madames while I went for the English breakfast. I was rather disappointed by my plate with the razor sharp crisp biscuity toast hurting my teeth and the absence of salt of in the egg white omelette paining my palette. The cappuccino at EATC was watery as always. Sad to see the quality dip and I do hope that they get their act right again as we are quite fond of EATC. 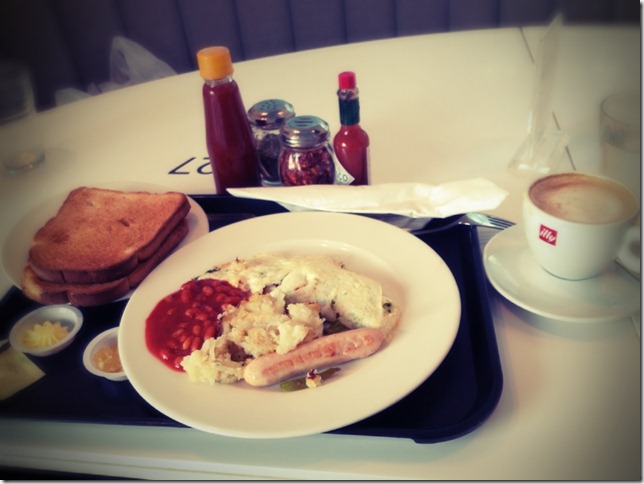 K and I went out for coffee this evening when I suggested that we go check out Eat Deli Cafe. She agreed and we went in.

I quite liked the look of the place. It’s actually quite a narrow space but the designer has used mirrors, a two level eating space, warm light tones, lots of wood, potted plants, chirpy posters to give a sense of space within the compact canvas. I chose a side where I could look out of the window into the Pali Naka traffic and down the stairs to add to the sense of space. they have free wifi too. 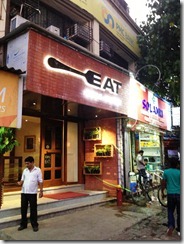 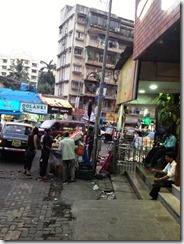 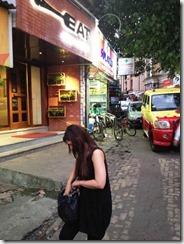 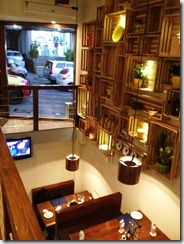 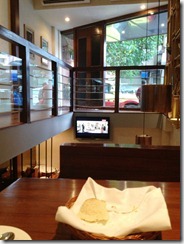 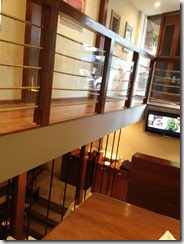 I checked out the drinks section  of the menu and wanted to try out a smoothie. However, on asking I found out they use fruit preserves and not fresh fruit and milk and not yogurt so I skipped this. There was no decaf either and I am quite wary of coffee in the evenings. Cafes should offer a decaf option specially for those who are wary of being up all night.  Later I found out that the cafe has had a soft launch and hence no decaf and the start of 11 am even though the all day breakfast is a big part of the menu.

I settled on a cappuccino and it turned out to be strong the way I like my coffee. It was served with a nice and nutty flavourful biscotti. I nodded in approval at this as I appreciate cafes who give a little something to much on with their coffees.

The coffee was served with a soft, warm garlic bread on the house along with a spice mustard dip which K loved while I added a bit of the parsley butter which came with the bread. 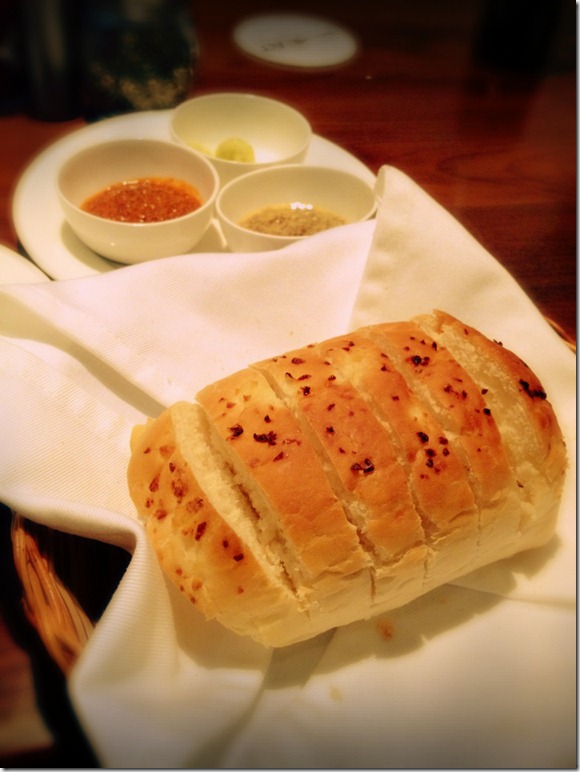 The dish was not exactly what K had in mind. It was more a conventional serving of scrambled eggs on toast with a generous helping of smoked salmon on the side and not within the eggs along with a lemon cream.

We both loved the scrambled eggs and kept admiring how well they were done. The eggs were delightfully luscious and packed with flavour. Scrambled to near perfection. I am not a big fan of scrambled eggs served in restaurants locally but the scrambled egg at Eat Deli Cafe was creamy heaven. By far the best scrambled egg that I remember having eaten in Mumbai. The quality of the salmon was pretty good and the plating very pleasant. 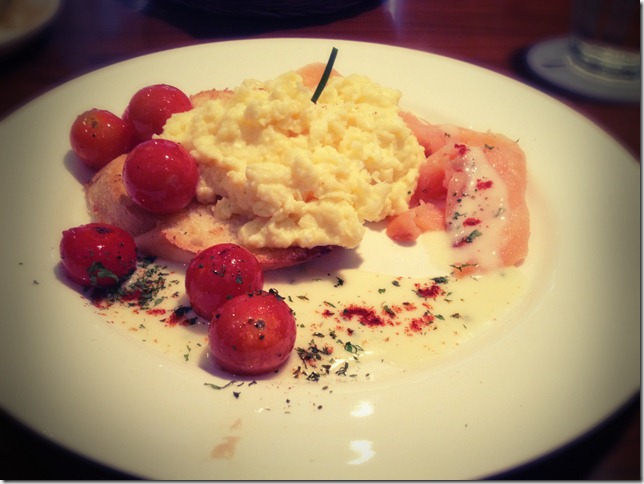 I wanted to order something more and ideally savoury. I wasn’t in the mood for waffles or pancakes. I didn’t feel like a burger so I checked out the pizza section. Turned out that they were 14 “ pizzas. K wasn’t really in the mood for a pizza and I didn’t want to risk such a large pizza specially if it didn’t turn out well.

Egged on by the scrambled egg I went for an egg benedict. K suggested it and I am quite fond of egg benedicts too.

Well to be honest the egg benedict didn’t live up to the standards set by the scrambled eggs. The main problem was the brioche which both K and I found to be too dry and a tad too sweet. The brioche took away from the experience of the perfectly poached eggs and the fairly good quality ham. Plus there was any hollandaise sauce so it was just eggs, ham and a rather weird bread. The roasted rosemary potatoes were truly spectacular but that’s like liking a Batman movie for the popcorn in the theatre if you get what I mean. 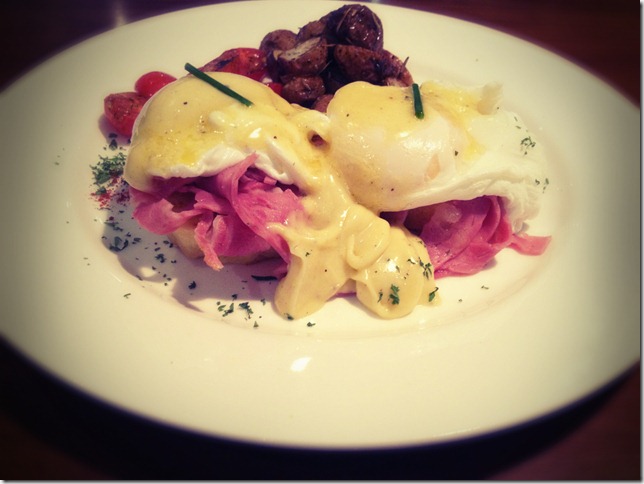 I never rate dishes or places but just to give you an idea, the scrambled eggs would be a 9 out of 10 (slightly more creamy and it would be 10) while the benedict would be 6 or even a 5.5. Both cost Rs 370.

At the end of the day, did we have a good time there?

The answer would definitely be yes especially for the scrambled eggs. 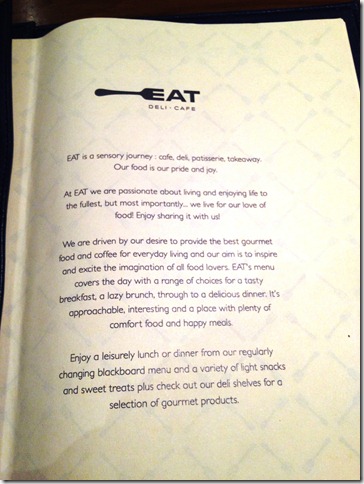 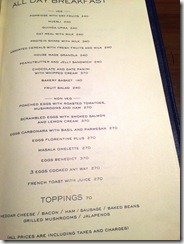 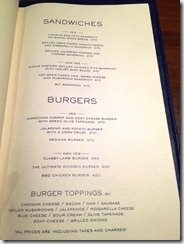 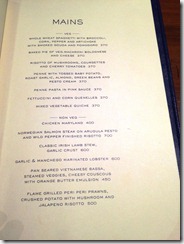 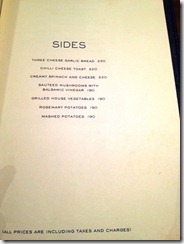 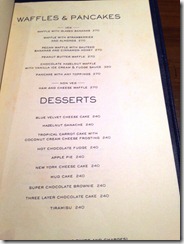 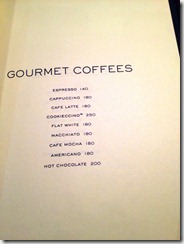