Something to chew on … Bagelwala, Bandra

Bagelwala in Bandra is the answer for those who swear by chewy bagels here.

Bagelwala takes pride in offering ‘New York style’ chewy bagels and delivers on this. I have not been to NYC yet. The closest to an authentic’ bagel experience that I’ve had is at the hundred year old Beigel Bake at London’s Brick Lane recently. That bagel there was soft and almost bun-like. Not chewy at all. Some of the other bagels available in Bandra… Bagel Shop, Saltwater cafe, Basilico, Moshe’s are moderately chewy at the most. Apparently you have to add in more gluten to make the bagels chewy.

Chewy bagels have their fans and many of those swear by Bagelwala. I have a problem with the absolutist school of food and often the fans of chewy bagels tend to run down other bagels as being non- kosher. Well, in this case the folks at Beigel Bake might have an issue with that.

I’ve made a couple of visits to Bagelwala.

The first time was a few months back. I remember the toasted bagels as being distinctly chewy, nice and unique. The jalapeno cream cheese spread was really good. We had the lemonade which was quite refreshing. We met the young software professional from the suburbs who runs Bagelwala. His enthusiasm and earnestness were infectious.

I also remember from that visit that the aircon was struggling in the heat and there was a musty odour to the place which made sitting in there rather unpleasant for me. There were a few expats who came in, bought bagels and left. One lady even came in and told the owner how much she liked the bagels. My friend Sue who is back in London right now was a big fan of Bagelwala too when she was here. The ambience put me off though and I didn’t return for a while.

I went to Bagelwala again last evening. I wanted a quick cheap snack around 8 pm. Bagelwala is just around the corner from our place. The basic bagel with cream cheese is still sub 100 (Rs 90). Outside of Candies, Andora, Snack Shack and the South Indian places, it is near impossible to get a sub hundred snack in any Bandra cafe. The bagels with non-veg fillings are an average of Rs 250 or so. 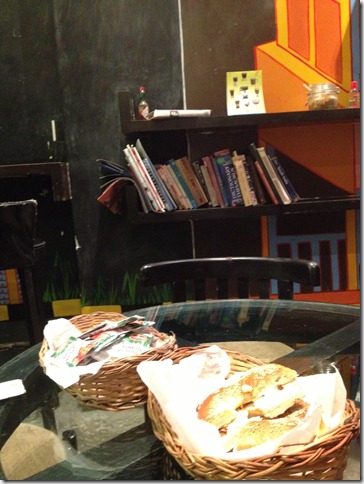 So how was Bagelwala last evening? The aircon worked. The musty smell was still there though! The place was empty.  I was the only person there which makes me a bit uneasy in an eatery. One lady came in towards the end to place her take-away order. The layout of Bagelwala with its tiny iron staircase, grey walls and faux Bal Bharati book-like graffiti could give a pleasant feel. However, the odour, grimy menu card and the very dusty books were a big turn off and I paid and run the moment I finished eating.

I went for a poppy bagel and half and half of onion and garlic cheeses. The jalapeno one wasn’t there. 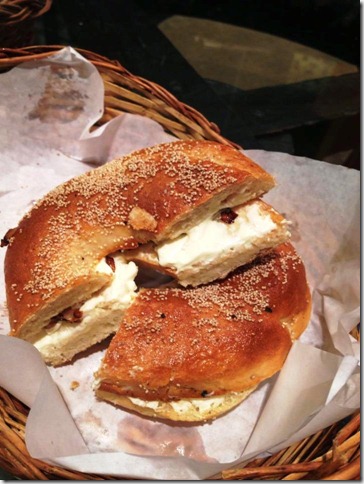 The bagel was served toasted and hot. Temperature was just right and not cold unlike in toasts served in cafes here. The bagel was chewy and filling and left one with a heavy feeling. The advantage of having it with just cream cheese meant that the bagel was the hero. If you went there for the chewiness of the bagels then this is good way of having them. I couldn’t make out much of a difference between the cheeses though. I wanted to try the peanut butter but they were out of stock of that as well. 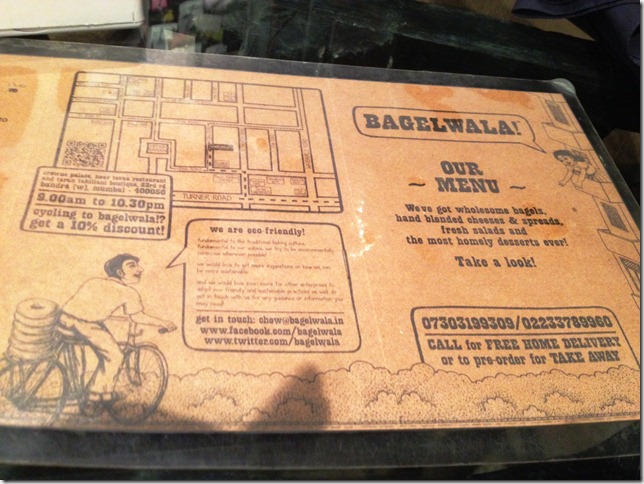 As a few of us discussed later on twitter Bagelwala is possibly a better place to pick up bagels from than sit in and eat. I am not a person hung up on the ambience of a food place but I have a problem if a place leaves you with an unpleasant feel. Given the pricing of their products and the location of Bandra the folks at Bagelwala will be missing a trick if they don’t look into this. Specially since they have a popular product.

As for me, I need a place to sit with my coffee and snack where I feel good about life…thankfully Bandra has some lovely options. 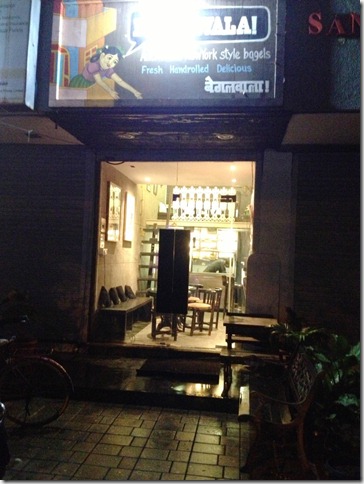 Finely Chopped is on the list of the IndiBlogger 2013 nominees in the food and travel categories. Please click on this link and recommend the blog if you like it. A comment there would be lovely