The Finely Chopped Fort Walk with Kunal Vijayakar AKA The Foodie 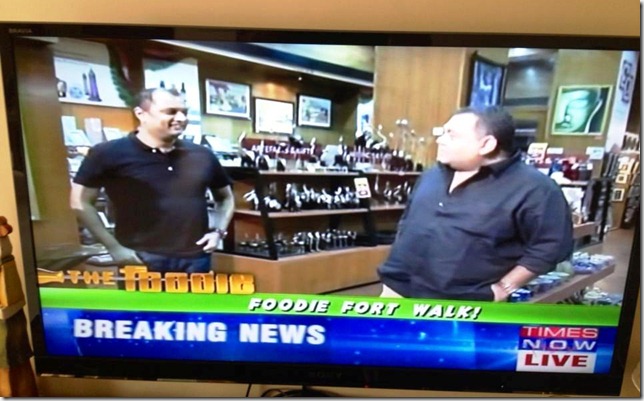 Here are the video links to the episode:

A couple of Tuesdays back we headed to Fort on a very rainy morning for a rather different Finely Chopped Fort Walk.

Walking with us this time was Kunal Vijayakar AKA The Foodie. They were shooting an episode of The Foodie around the Finely Chopped Walks. After going through the options Kunal chose Fort.

It was raining heavily the previous night and through the morning as we headed there from various parts of town. To walk with Kunal I had 5 special guests. Vipul (@sporty_baba), Rishabh, Jyotika, Sameer (@foodbloggerAI) and M. They took time off from their schedules and came for the walk.

We met at The Bombay Stores where Tarana, Mohit, Nick and the rest of the Times Now Foodie team were waiting for us. Bombay Stores has been a supporter of the walks right from the start and has been our base camp whenever we do walks at Fort.

Kunal joined us there. I had first met Kunal when we shot together in an episode around blogger and friend Rushina Munshaw Ghildiyal. She had invited us for a potlock segment in the episode. In the first meeting itself Kunal came across as a very affable and approachable person and mixed easily with all of us. We had met a few times since then and always had effusive chats about food. This time too was no different from the shoot at Rushina’s with Kunal starting off by putting everyone at ease. As a result of which it seemed like all of us knew him for ages when we walked together for the next three hours or so.

From Bombay Stores we headed to Yazdani. As we walked someone who knew Kunal from Mahesh came and chatted with him on the road. If we needed any proof that Kunal is food royalty then we got that at Yazdani. I’ve always gone inside to the bakery at Yazdani when I go with people with Tirandaz Irani of Yazdani very kindly allowing us to go in. Shooting at Yazdani is a different matter though. They had recently sent Rick Stein’s team packing I was told and before that I had heard stories of how an ad film crew had a tough time shooting there. Apparently the crew landed there after getting all permissions but in the morning the elders at Yazdani said ‘no shooting’ and put their feet down. It took all of Irani actor Boman Irani’s charm to finally sweet talk the owners into the shoot happening. Boman, luckily, was a part of the ad. We didn’t have him any such Parsi mascot with us but in Kunal we did have an honorary Parsi. All Irani cafes that I’ve been to talk fondly of Kunal who is known to be really fond of Parsis and Parsi food.

While the Times Now crew had called up in advance at Yazdani, they we were not sure if we were cleared for the shoot. We walked in a bit tentatively and then Kunal stepped in. The moment he did, Tirandaz and his dad came up, welcomed Kunal with a smile and said ‘come, come…you want to shoot? …welcome welcome…go inside also and shoot…is this for cinema?”. (Tirandaz is a big Salman Khan fan by the way).

As anyone who has tried to shoot a film at Yazdani will admit, it really takes something to get this special treatment and like I told Kunal, “you are royalty man”.

Bakery tour, bun, brun maska and chai done we walked on again to our next stop, Moti Halwai. Here we stopped for some of their heart warming  and milk moustache inducing lassis..one of the best in Mumbai. A crowd began to gather as we shoot. Kunal then moved on to Horniman Circle to shoot the programme intro.

All of us then went on to Khao gulley and shot the pao bhaaji and mixed pakoras which were piping hot and so right in the wet weather. Miraculously it had stopped raining as we began our shoot that morning.

Next stop Pradeep Bhojanalya, a place Kunal was particularly keen to try. We went for the Gomantak…Goan & Maharashtrian style thalis…surmai. tisrya (clams) for Kunal, Bombay Duck, mutton, sol kadi, rice and vade. A gentleman from another table popped his head and asked Kunal “where is Cyrus”? Perhaps he thought we were shooting for The Week That Wasn’t.

For Kunal the fare at Pradeep was home food no doubt but the next stop was his home ground. A common favourite of ours, Parvez’s Ideal Corner. We were beginning to get quite stuffed by then but did go in and try some starters akoori or the Parsi scrambled eggs, cutlets and a fantastic omelette encased bheja (creamy goat’s brain fry) all washed down by Pestonjee Raspberry. Kunal loves his Parsi food and told us about his experience of having 50 different dhansaks in 50 different households. He pointed out that most akooris or not the same too though they must be creamy else they become burjis.

We discussed about how every Parsi feels that that his or hers mom’s dhansak is the ideal one when Kunal made an interesting point. He said that standards in dishes like butter chicken or tandoori chicken, which are available in restaurants all over, are defined by the restaurants that serve them. However cuisines like Parsi, Goan and so on which do not have much a restaurant presence are defined by home cooks and traditional Indian dishes do tend to vary quite a bit in form from family to family. Hence the ambiguity in their definitions according to Kunal.

Sufficiently enlightened and fed we ambled out and rolled on to our last stop, Vidya Dairy. Unfortunately our favourite Ustaad wasn’t there but the chhote ustaad, with a much shorter mooch than the ustaad, dished out some pretty lovely jalebis for us.

Kunal looked at the camera and summed up the morning with a huge smile calling us the biggest gang of bhookads (eaters) that he has come across.

As I looked around I saw that Kunal’s smile was infectious and everybody had had a great time.

Thanks Kunal and the team at Times Now for the wonderful experience and for featuring the walks.

Thanks to my friends who took the time out and joined in for the shoot.

And big thanks to Rashmi Uday Singh…this shoot wouldn’t have happened without you Marilyn.

Here are a couple of blog posts on the Walk:

Sassy Fork said…
That's a lovely post! Kunal is indeed a wonderful anchor making everyone around feel at ease!
12 August 2013 at 21:51

Kalyan Karmakar said…
Thanks. It was a lovely and relaxed morning thanks to Kunal
13 August 2013 at 13:25