Ganpati lunch at the Dikshits of Dadar on Ganesh Chaturthi 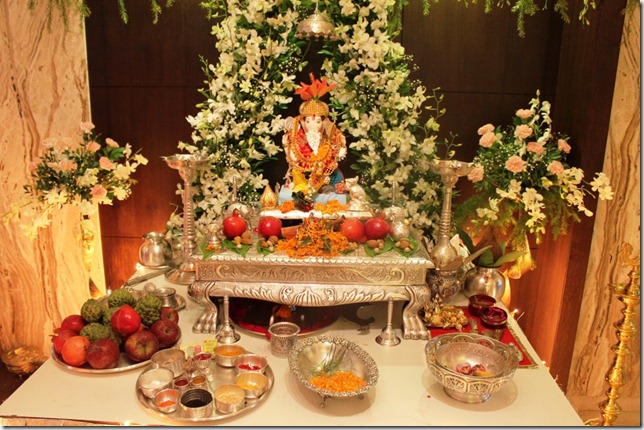 I was quite keen to know what happens during a Ganpati puja and what’s served for lunch after I got a few texts from friends inviting me to the Ganpati Pujas in their houses. Unlike the Durga Puja in Kolkata which is largely a community affair, in Mumbai many observe Ganpati Pujas at home too. I spoke to a friend of mine about wanting to sample the Ganpati food and she organised an invite for me at the house of the Dikshits at Dadar’s Parsi Colony.

I jumped at the opportunity and drove down in the mild rain to Dadar. On the way I passed by a bit of traffic as some of the community Pujas were bringing their deities home in trucks and even bullock carts amidst much fanfare. Unlike the Durga Puja in Calcutta, the city of Mumbai is not shut through the days of Ganpati. This often leads to traffic snarls and loudspeaker related noise pollution problems. I am sure that those who observe Ganpati at home have a tough time balancing work and the festival. What is unmistakable though is the air of festivity that shrouds the city. As Rajani, the proud daughter in law of the Dikshits later said, ‘Mumbai is a such a stressed out city that we need all the festivals that we can get.’ 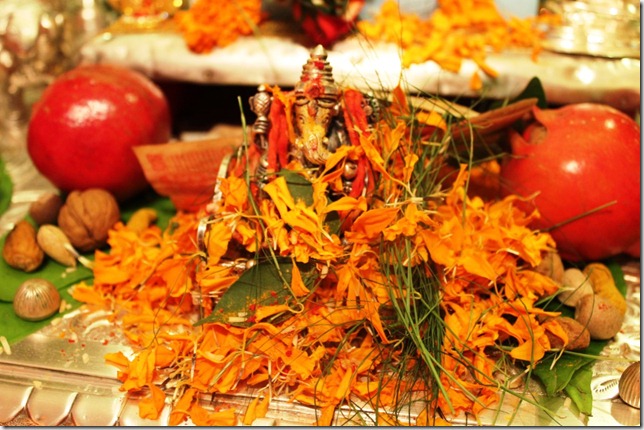 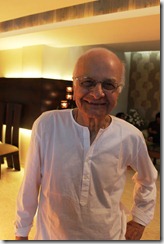 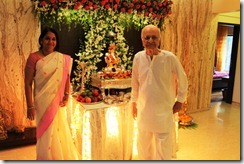 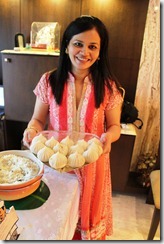 The puja at the Dikshits which is held in their Dadar apartment is 83 years old and was started by the grandfather of the present patriarch, Mr Girish Dixit. Mr Dikshit was the chief photographer with the Times of India and had just been felicitated for his work at the CCI. I suddenly felt very nervous with my camera in front of him. However, with his twinkling eyes and benign smile Mr Dixit put one at ease very quickly.

His son Shirish and daughter in law Rajani invited me to the house and made me feel very welcome even though I was a last minute guest and a stranger to boot. I later realised what a big honour this was for me. The first day of the puja is reserved only for close family I was told as most preferred to spend it with their own families. Family friends and business associates are invited on other days by the Dixits. Yet, there I was curious and hungry and very well looked after. 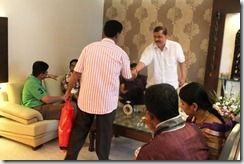 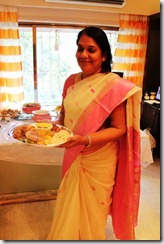 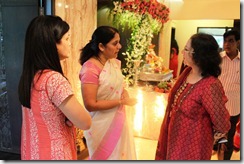 Rajani took upon it herself to answer my questions and was my guide to what was happening around me. I got to know that the puja at the Dikshits, which started 83 years back, has been going on uninterrupted since. Members of the family from across, including from outside of Mumbai, try to make it for darshan and puja here. It is a great opportunity for the family to catch up after being busy with their own lives through the rest of the year. From the smiles around me and the enthusiastic chatter it was obvious that I was at a happy place. The feel that of the Durga and Saraswati pujas in our building in Kolkata. This was obviously the most wonderful time of the year for the Dixits and all devotees of the elephant God.

Rajani told me that Ganpati is the most popular deity in Maharashtra and that he is considered the God of wisdom. She said his name is taken by Hindus at the start of any auspicious activity across the country. We compared customs across the country. In Kolkata Ganesh pujo is part of the overall Durga Puja. Maharashtrians don’t have a concept of a kola bou or a banana tree to which Ganesh is married here unlike among Bengalis. During our chat Rajani remarked that most deities prayed to in Kolkata…Durga, Saraswati, Lakshmi, Kali…were women and said “I like that”.

What’s common across Mumbai and Kolkata regardless of whether you call him Ganpati or Gonesh, or more affectionately Gannu or Gonsha, is that the chubby elephant God loves to eat. I headed to the table where a buffet had been set. At the Dikshits they have a Gujarati chef who comes and cooks through the five days of the Puja. The food is vegetarian, without onion and garlic and the menu is changed every day. During the Navrati festival later in the year I was told, seafood is allowed, though not meat. 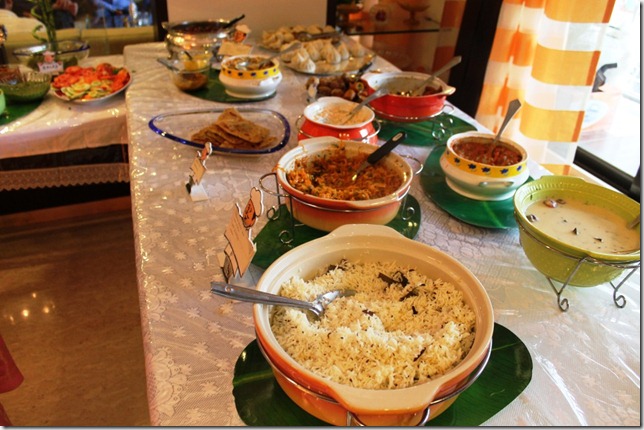 Shilpa looks after the food arrangements at her parents place even after her marriage. She told us that she balances out the modaks (sweetmeats dished out at Ganpati) with two hours at the gym every day.

Though the menu changes, the one constant, Rajani tells me is the fact that 5 sweets have to be served on the first day, viz Ganesh Chaturthi. The elephant god has some evidently sweet tusks. One fixed item here is the puran used also as a stuffing in puran polis. There was also the ukadiche modak which is a jaggery and shredded coconut dessert steamed in a rice flour casing. There was also some lovely home made moong daal halwa and gulab jamun. The shrikhand was the only store bought dish. There’s also a special kin-sized modak bought from the shops that is cut on the last day of the puja. 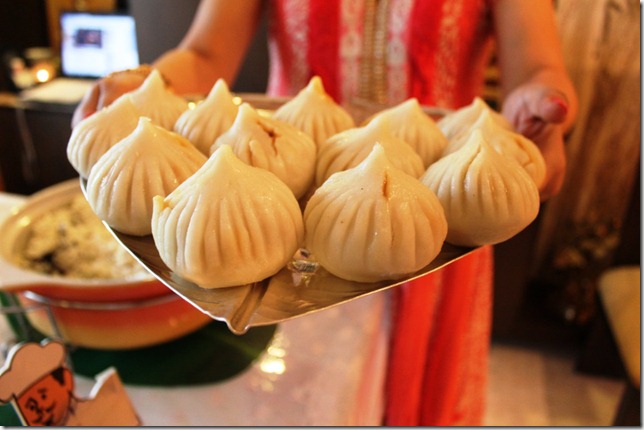 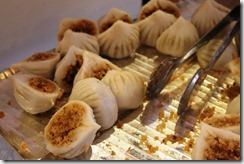 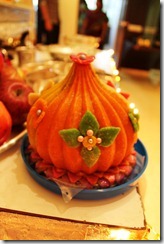 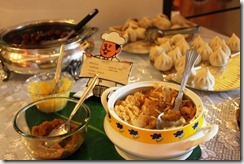 Rajani plated my thali. The sweets are placed in the centre. Lord Ganesha is a very particular about his desserts I guess and doesn’t want them out of sight. On one side of the plate was the salad, pickles, raita and the pakoras on one side. Then there were the parathas and mains…a coconut based korma like gravy, a potato sabzi, rice, kadhi, a cabbage and peas saabzi and a paratha. Truly a feast for the gods. The meal so scrumptious that I didn’t look up even once as I ate. 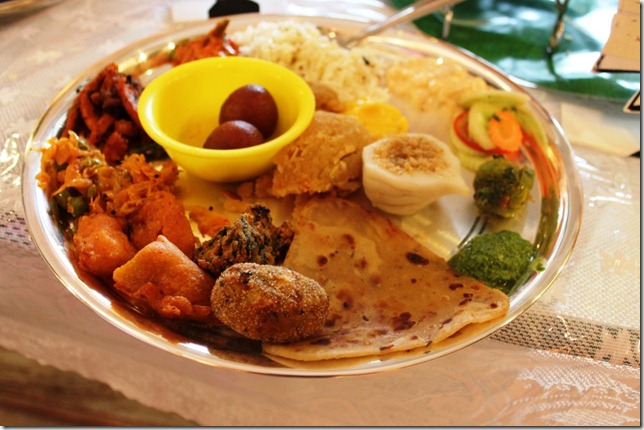 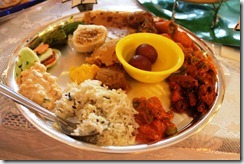 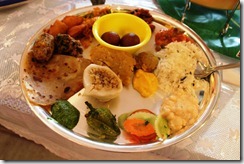 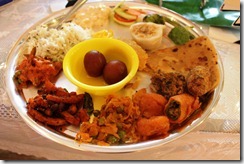 It was finally time to bid goodbye after being hosted for an hour or so by the gracious family. On the way down I passed by the Parsi Colony Puja where there was a sit and draw competition going on for kids. The feel a lot like our building’s Durga Puja in Kolkata as my brother pointed out when he saw the picture. 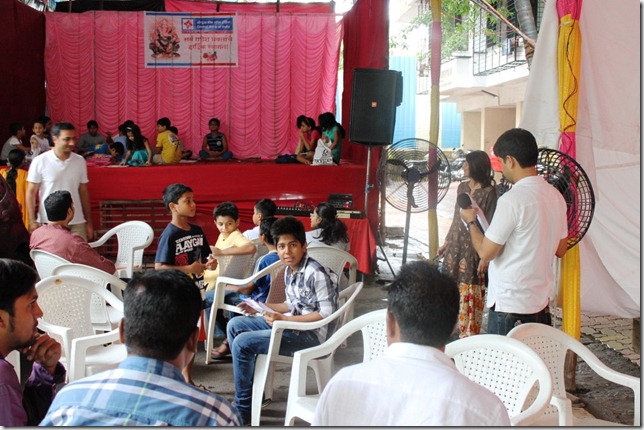 A day later I was stuck in bad traffic as the one and a half day visarjans were on. I was not alone as people tweeted their traffic frustrations from all over. The mood so far of from the warmth and peace of the afternoon at the Dixit.

We must figure out a way where religion and customs are about joy and happiness and not angst. Yesterday was a beautiful example of the serenity that can come through in Ganpathi poojas like those of families such as the Dixits. I would rather hold on to memories and associations like those over the traffic jams and loud decibels that cause such angst.

Hopefully someday we will learn to celebrate in a manner which makes all truly happy.

I can’t thank the Dikshits enough for welcoming us and making us feel like a part of their family…that to me is the true spirit of Ganesh Chaturthi and I was blessed to have experienced it. 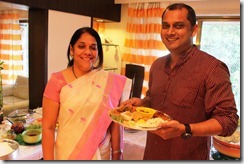 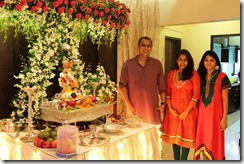 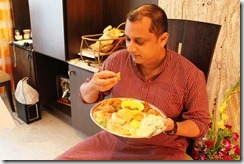 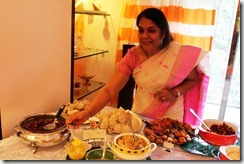 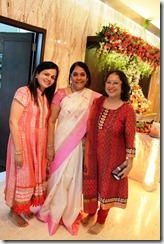 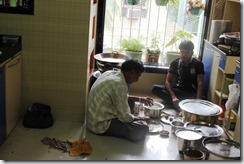 Maunika said…
That looks like an amazing meal Kalyan! Happy Ganesh Chaturthi! Its the perfect way to celebrate. Yearning to do the same in India soon. Maunika x
11 September 2013 at 00:16

Kalyan Karmakar said…
Thanks Maunia and hope you do manage to come to India for Ganesh Chaturthi some day
12 September 2013 at 18:27

IshitaUnblogged said…
Kalyan, what a gorgeous post! The best photographs I've come across in your blog - the inspiration must have been the senior Dixit. The Modaks had taken up 3-D proprtions. Love reading your posts and I realised how much of a time constraint I have nowadays to read up my fav food bloggers' posts.