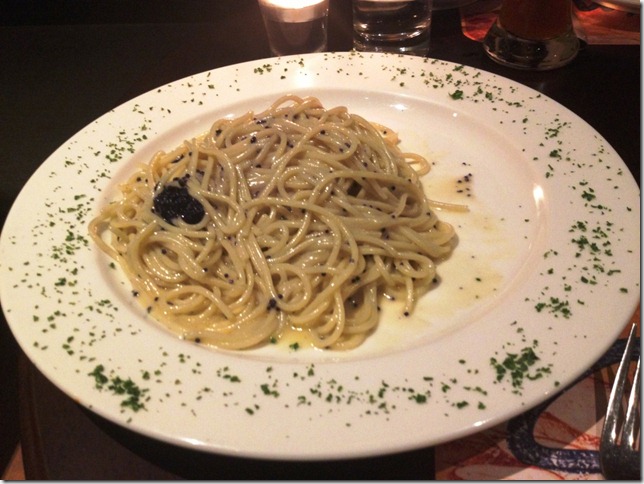 The crème brulee was on the house but this post is not about that. I’ve had the Serafina pizzas before this in the  conference at the Comedy Shop and they were pretty good.

Update after a recent visit at the end.

This blog post is based largely on just one dish in a restaurant.

Rather strange for a restaurant review? Well, as a I keep saying, blog posts are different from journalistic reviews. Blogs are based on an individual’s experience. They come with biases, can be situational. On the other hand one can argue they are more real.

Chances are that if two people go to a restaurant and are not too hungry and if the average dish price there is close to four figures then they might order just one dish and share it. This dish could be ordered basis whatever catches their fancy on the menu. Or the waiter’s recommendation. The dish could be a hit or a miss. And chances are that they would form their opinion of the restaurant basis that one dish.

Very different from a hosted review where a restaurant takes out their full range of dishes for the reviewer to taste. Where the dishes are either on the house or, in rare cases, paid for by the reviewer’s employer. In my experience the latter happens more for television than print. Most shoots I have been a part of have involved the producer offering to pay for the dishes. Most newspaper, magazine freelance assignments that I have had haven’t had a separate budget for the food though. In hosted reviews the reviewer takes bites from a plethora of dishes and passes judgement on the menu. That’s not what happens when a blogger writes from a real life experience. You will just get a glimpse of the overall experience in such a case. Reader’s discretion in both cases is strongly recommended.

I must point out that the dish in question, the spaghetti al caviale (caviar) at Mumbai’s Serafina, is indeed special.

The dish caught my fancy and I ordered it from this Mumbai branch of the NYC based Italian restaurant. It turned out to the dish that woke up fairly jaded palettes. Palettes which are exposed to fairly good food and lots of it. The spaghetti al caviale at Serafina won both of us over.

Its taste ethereal. A perfect example of simplicity which makes the ingredient the hero of the dish. The menu promised us a caviar spaghetti and that’s what it delivered it with every bite. The spaghetti was tossed in just a bit of butter and extra virgin oil and the right amount of salt. The taste, texture, flavour and aroma of caviar permeating through every bite. This was a dish that promised caviar and gave you just that with every forkful. 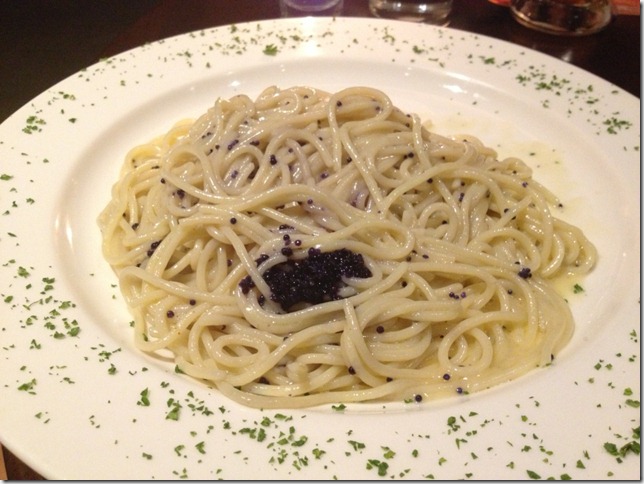 Yes the dish cost Rs 900 plus taxes etc. but at least it made you feel special. Both of us were impressed by the spaghetti and agreed that it was the most marvellous dish that we had tasted in a restaurant in a long, long time.

The menu at Serafina claimed that the spaghetti al caviale was like ‘Rome in the 1960s’ and yes it was pretty much an Audrey Hepburn black and white classic if you know what I mean. 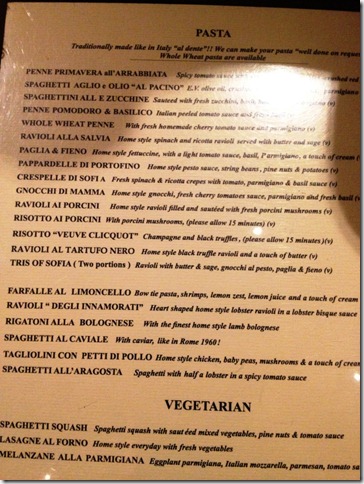 The dish so sensuous. So pure. Living up to every promise whispered in your ear. Making you swoon with every bite. The phrase ‘poetry on your plate’ was never more apt.

If someone was to ask me ‘which is the one dish that you have had this year which stands out in your head’ then I would say without much thinking that it’s the spaghetti al caviale at Serafina. I am sure K would agree too.

We tried the pannacota too and the subtlety of the firm textured dessert, neither too sweet nor too less, and with the enticing nibbles of crushed vanilla nobs was impressive. 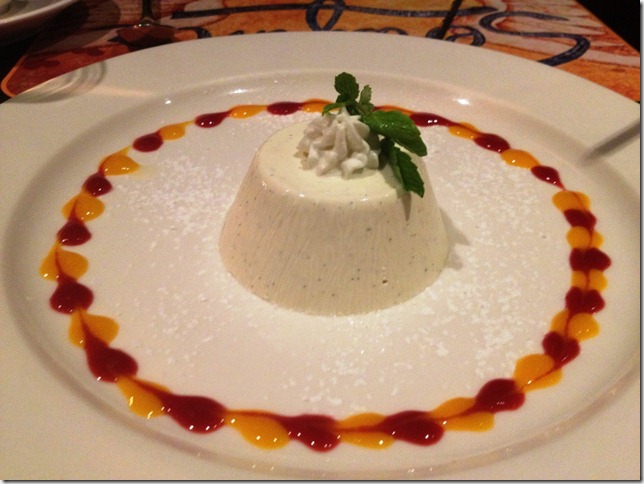 The service at Serafina lived up to the prices. The waiter competently answered my questions on the menu and on the dish we ordered. Noting that we had ordered one dish between the two of us he thoughtfully got two small plates with the dish of spaghetti on his own accord. The bread, which was on the house, was fresh and warm. 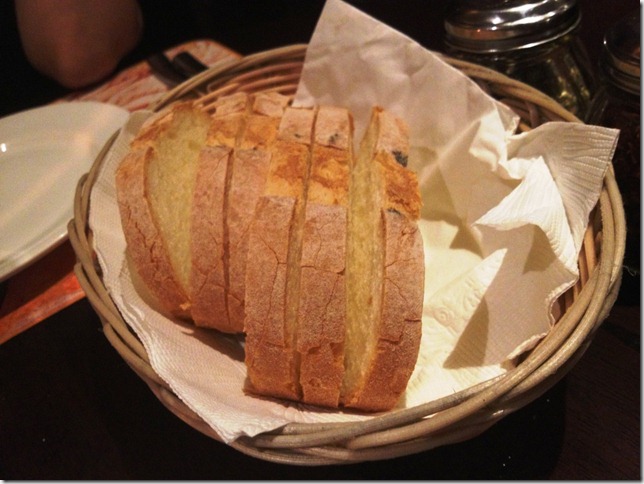 Later the manager came in to ask about our feedback. Pleased on hearing about our unabashed love for the spaghetti he offered to get us a tiramisu on the house. I am not much of a tiramisu fan so requested for a hazelnut crème brulee instead.

It was difficult for anything to match the life defining standards laid down by the spaghetti al caviale of course. If you leave that fact aside the crème brulee really impressed us and the strong undertones of hazelnut and chocolate were quite dervish-worthy. The blow torched caramelised surface with its strong sweetish overtones gave an Indian malpua like feeling to me in a western dish making the experience quite molecular.

We were in a hurry to catch Shoojit Sacar’s very well made Madras Cafe, so thought we would take a few polite nibbles of the brule and run.

We wiped the dish clean. 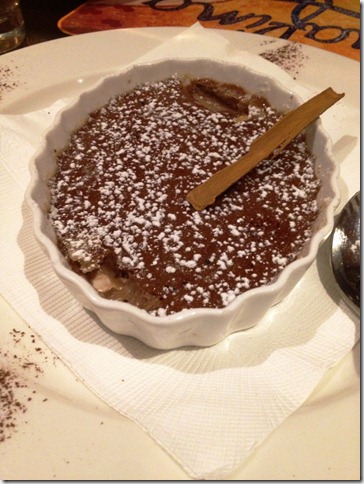 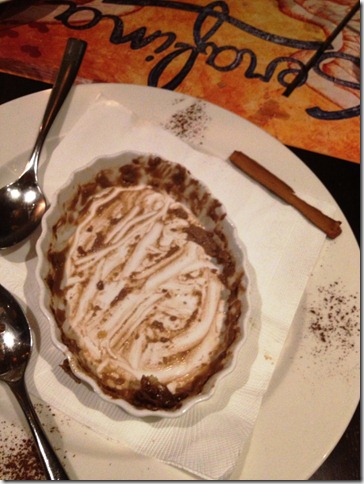 Sometimes it’s really good to go with the flow.

We headed to Serafina again for a long pending treat that I had promised K. Once again we coupled it with a movie. This time, 'Fading Giggolo'. Not a Woody Allen film but his screen presence is such that even though he didn't direct it and was just the second lead it seemed like one.

Coming back to Serafina, we were worried that they were closed as noone picked up the phone when we wanted to book and the the twitter handle @serafinamumbai didn't respond to my query on whether it was open.

Thankfully it was and we had another great meal. This time K had the spaghetti al caviale and loved it.
I went for the lobster ravioli in lobster bisque and was held in a spell by it. The way they flavour of the lobster come through the silken ravioli was just amazing. Brought alive the Italian cooking philosophy of simplicity that I so love and miss in masala laden Indian restaurant cooking. The flavours teased and tantalised the palate and was quite an epic dish. 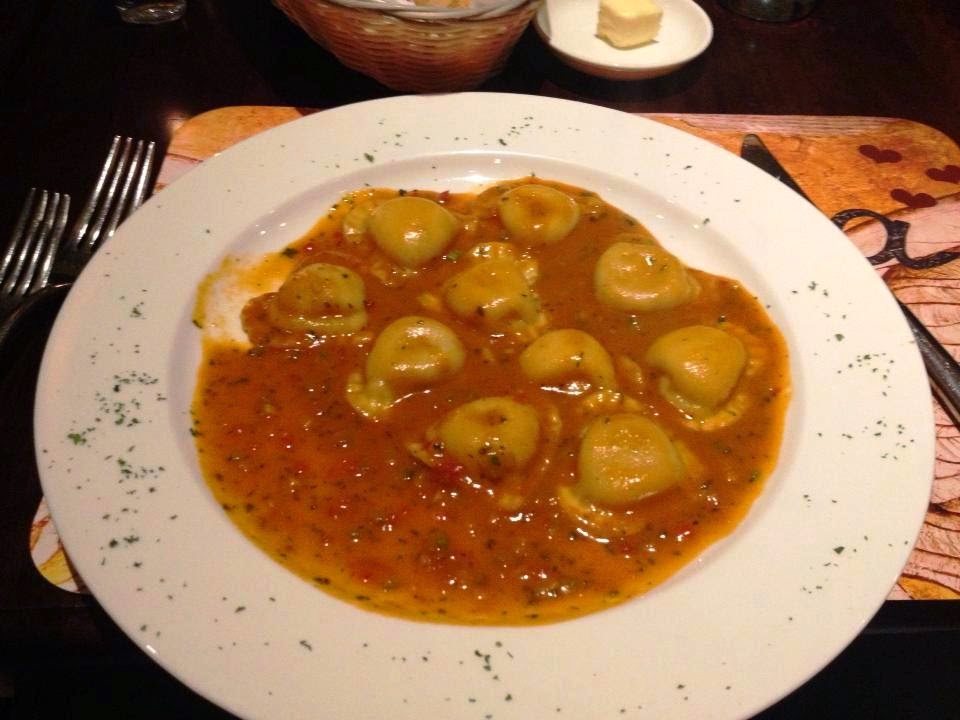 K wasn't too ken on a dessert but I insisted that she try one and at the end she was so pleased I did. We  ordered the chocolate mousse and were blown away by the dreamy, creamy, chocolatey mousse. Possibly one of the best we have had. Reminded one of the Ritter Sport mousse version.

Definitely one of our favourite restaurants for Italian. 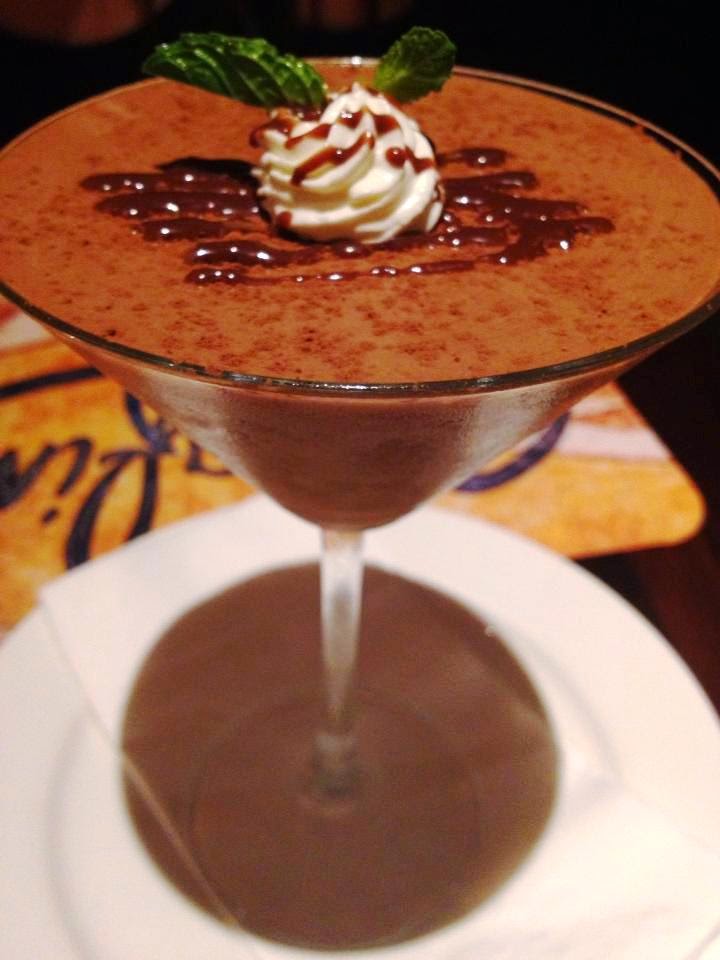 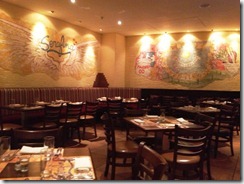 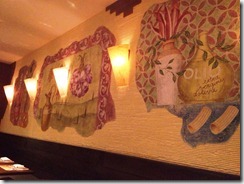 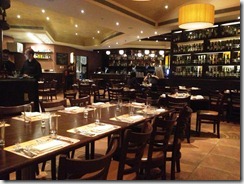 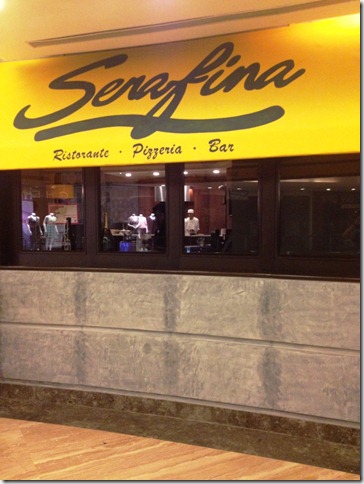