An Assamese lunch with Bengaluru’s Oota Company at Axomi, Koramangla 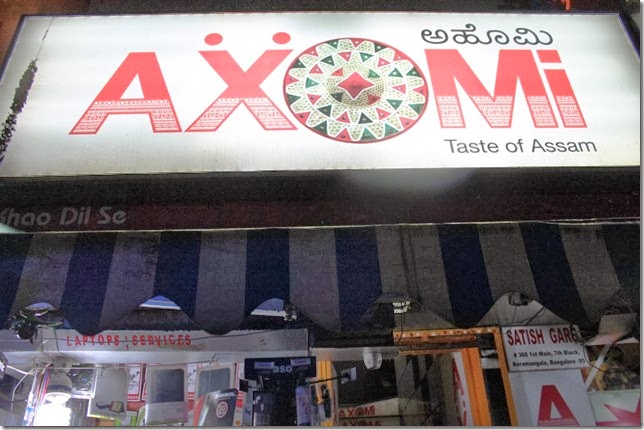 .
You could argue that all of the above are forms of South Indian food and that Bangalore is from the South of course in which case what do you have to say about the smorgasbord of Axomi food from the North Eastern state of Assam that I tried there?


The opinion on the food at Axomi is divided as Panjoy, the young owner of Axomi admitted to me. He told me that while non Assamese guests liked the food at his place he was apparently unable to win over all the Assamese that came here in search of home food. A trend similar to what I have seen for Bengali restaurants that have been set up outside of the mother state which often seem unable to satisfy the clan.


Well what I can say is that I thoroughly enjoyed the Assamese meal that I tried in Axomi (pronounced Ohomi) in Bangalore's restaurant hub of Koramangla. Though I must quickly point out that this was my first experience of Assamese food and therefore while I can talk about how the food was in absolute terms, I have no idea of its authenticity.

I was at Axomi as guests of Shibaji Ghosh of Chowzter. Chowzters is a worldwide group of food  bloggers who curate their favourite food in their cities for readers. I have the honour of being the 'chief Chowzter' or rep for Mumbai. This dinner was strictly not Chowzter business though.

Shibaji and Seema are part of The Oota Company (literally translated: the food company), a group of food lovers in Bangalore. From what  I understand they go out and eat restaurant meals curated by folks like Shibaji and Seema . Those who come for the dinner then go Dutch on the costs.

This time the dinner was at Axomi. 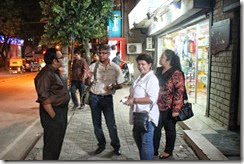 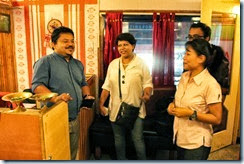 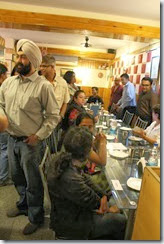 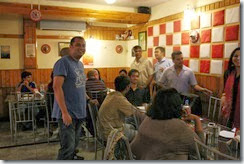 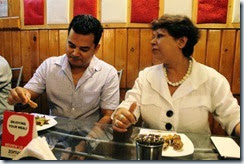 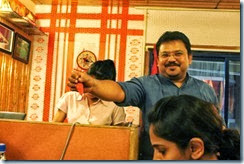 Axomi is a cosy and simple Assamese place at Koramangla in Bengaluru. This spot in Koramangla is a bit of an Eastern corner from what I could see. It is opposite a Bengali restaurant called Panch Phoron. There is a phuchka guy just below and I saw quite a few of them in Koramangla and a bit down the road, I am told, is the Bengali sweet shop from Kolkata, Banchharam.

I was quite interested to see if there was a similarity between Bengali food and the Assamese food that we would get to sample at Axomi. 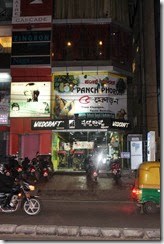 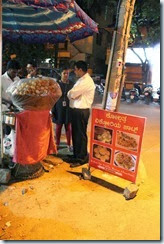 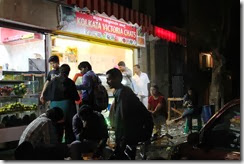 Axomi has thalis or set meals but the folks at Oota Company had curated a long list of dishes from the a la carte menu. Our group had 25 to 30 odd people from different communities, including one Assamese and a Bengali married to an Assamese, who were there.

We started off with something like pakoras and then there was pork barbequed on wooden skewer and you could see a few burning embers on the very juicy pork. These were served with a mix of spicy pickles which included one with the famous bhoot jolakia chillies. 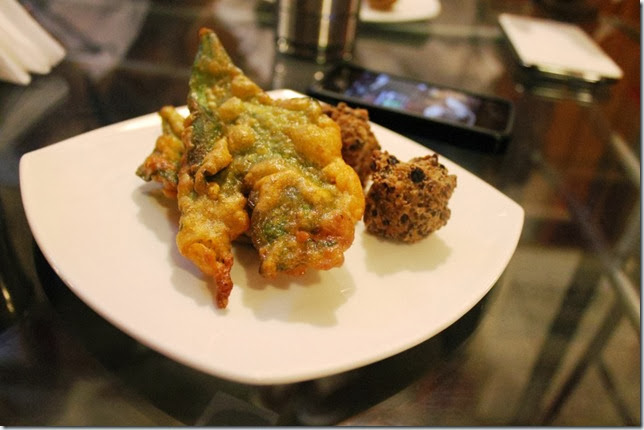 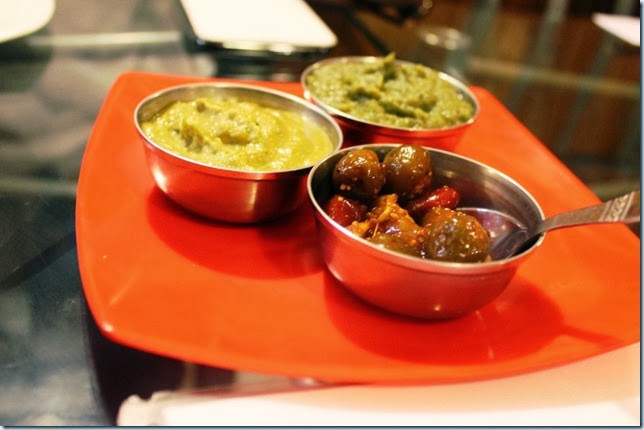 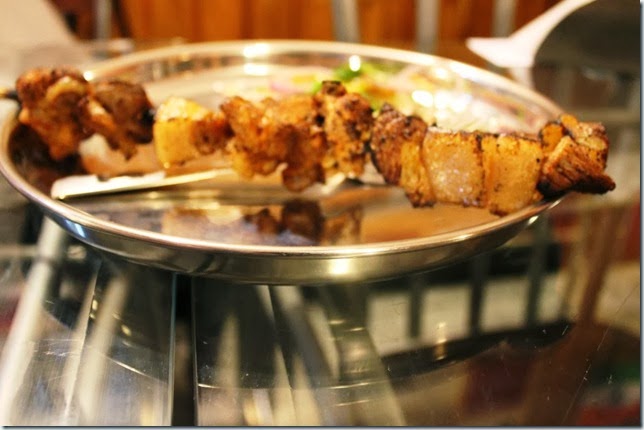 There was a duck curry which had a very rough garlic and turmeric flavour which reminded me of chicken curries (murgir jhols) served in very basic Bengali restaurants known as pice hotels. We just lapped this curry up. The duck was more tough than soft but the curry was incredible. The duck had potatoes in it which made the dish seem like a long lost cousin of the Bengali murgir jhol. 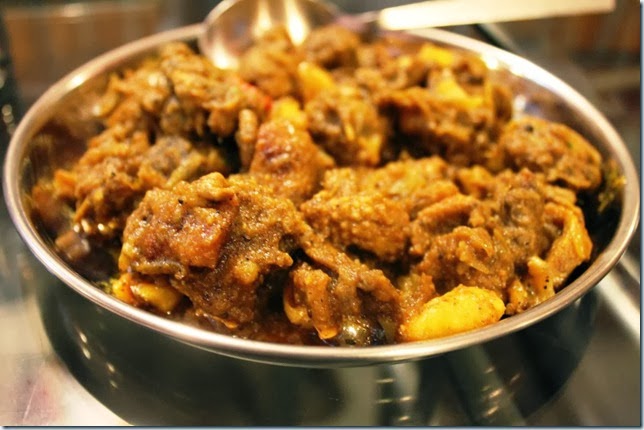 Then there was another pork dish which was truly bewitching. Smoked pork belly cooked with bamboo shoots. Bamboo shoots have a strong taste and need some getting used too. The first bite made one pucker one’s lips. Then slowly one began to appreciate the softness of the pork that spelt succulence like few else can. What was most distinctive for me was the flavour of the smoked pork which imparted an alluring smokiness even to the sauce. The dish held us in its spell.

The pork curry was served with lucy or Assamese for luchi. The fried flour bread and the tender pork belly made it an artery clogging racy combination. 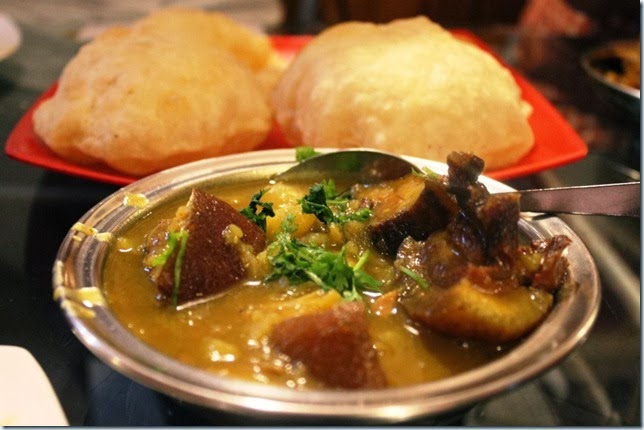 There were a couple of fish dishes. One the famous Assamese sour curry called thenga and the other a dish steamed in a green paste in banana leaves. The looks similar to the Parsi patrani maachhi, the taste very different. Nor was it like the Bengali mustard based paturi. Both fish dishes were made with small rui and were frankly too bony for me to try. 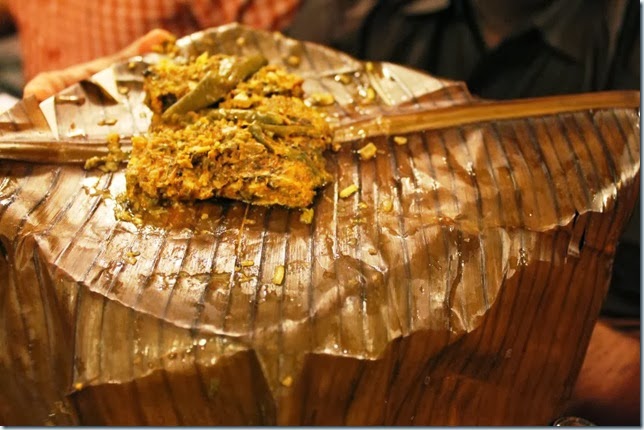 For desserts there was a kheer similar to a Bengali payesh and then a doi gur mihidana which was an interesting combination of plain curd, jaggery and bonde (boondi). Desserts which reflected the sweet smiles of the young couple that owned the place. 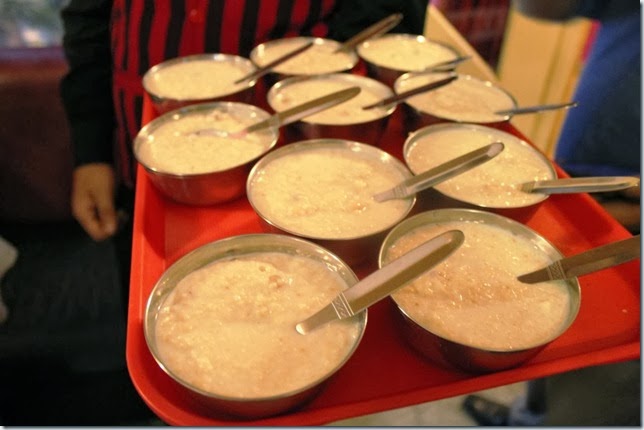 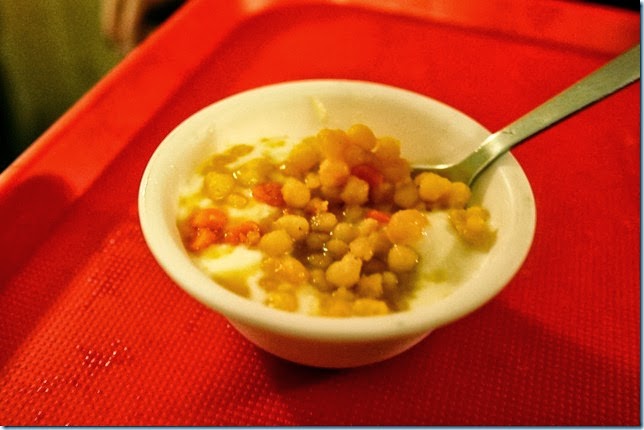 It was truly a wonderful evening and not just because of the food. It was the company of strangers who made me feel at home that made it so special. I also got to meet a friend from years back. The folks at Oota Company come from different backgrounds and are united in their love for food. The lively conversations and the peals of merry laughter the best condiments a meal could have. 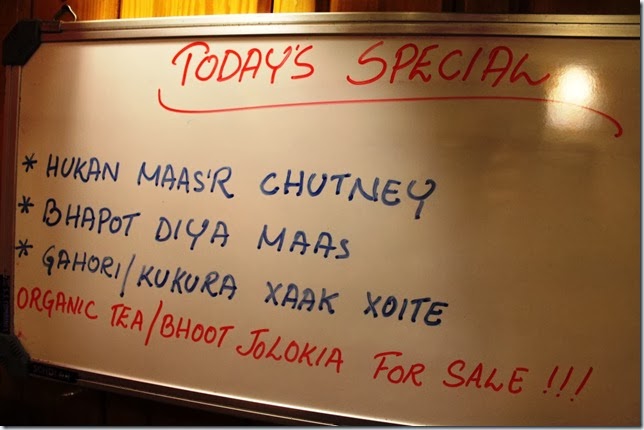 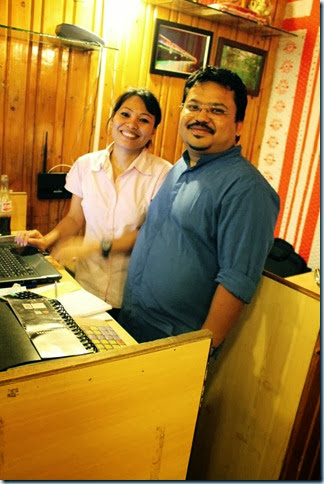 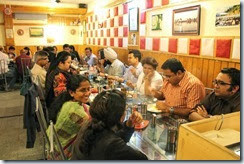 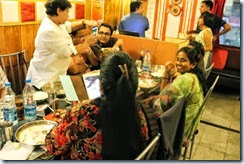 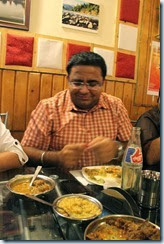 Big thanks to Shibaji, Seema and Sangeeta of Chowzter for inviting me to the enchanted evening.