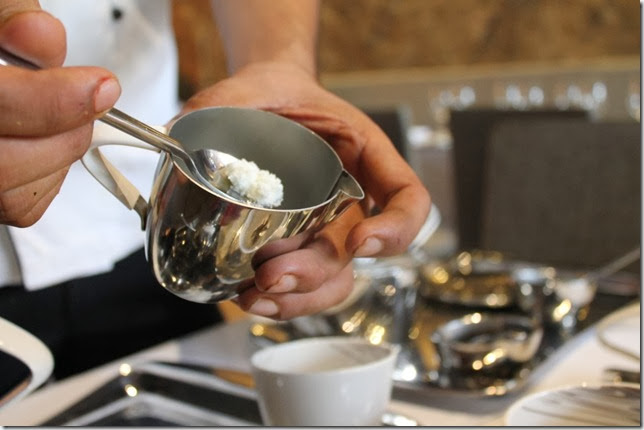 This is not an anonymous review

Shows like Masterchef Australia, the odd episode of Bourdain’s No Reservation and literature from the world of modern food have left me curious about the concepts of molecular gastronomy and modern culinary technology.

What added to this sense of wonder is that restaurants offering molecular gastronomy are not easily available in Mumbai. Plus I have always seen these techniques being spoke in of in the context of European and Asian but not Indian food. I was interested to see how they worked as a concept and how they worked in the context of Indian food. Which is why I readily accepted the invite from Sameer Malkani of the Food Bloggers Association of India to join him for a chef’s table hosted by Masala Library in Mumbai’s Bandra Kurla Complex. I had earlier read reports from bloggers who had attended the FBAI pre-awards party at the Masala Library and it seemed like they were doing interesting things with Indian food at the restaurant.

Masala Library is at Mumbai’s BKC which is emerging as a hub for premium restaurants opening in Mumbai. The ambience of the restaurant has a fairly clean and global feel to it. They do not make an effort to ‘Indianise’ it here. The idea, owner Zorawar Kalra, tells me is to offer a contemporary and modern face to Indian food and the decor reflects this desire. His father, legendary restaurateur, Jiggs Kalra, who joined us for a while, nodded in proud approval. 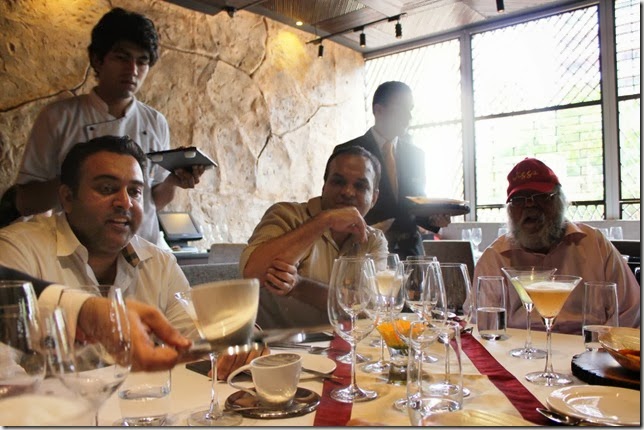 Zorawar told us that the kitchen staff led by the 26 year old head chef Himanshu spent months pouring over books and experimenting with machinery to put the menu in place. No one at Masala Library I am told has had a formal training in any restaurant that practices molecular gastronomy. The folks at Masala Library are self taught it seems.

Zorawar also told us that the food that followed would seem familiar in taste but different in form and the afternoon, to a large extent, showed us why. We tried the chef’s tasting meal (Rs 2,200 possibly with taxes and service charge extra) and a few more dishes too as the restaurant’s best were paraded in front of us. Joining Sameer and me that afternoon were Aneesha Baig of Will Travel for Food, Rushina Munshaw Ghildayal of A Perfect Bite Studio and food journalist, Marcellus Baptista. 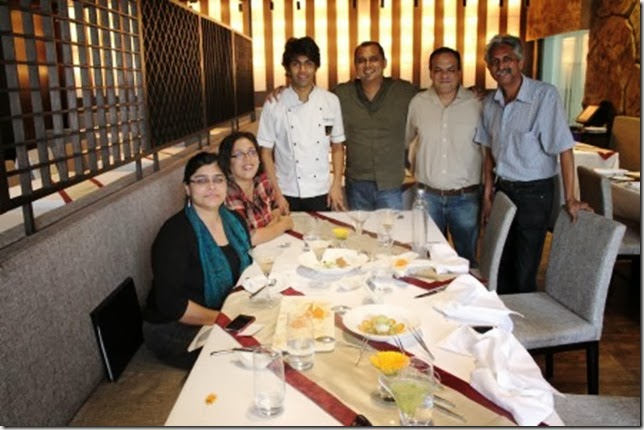 We had a lot of food that day. Too much actually and were left bursting at our seams at the the end. So let me try to categorise them for you.

There was a curry leaf martini and I had both the alcoholic and non alcoholic versions. The use of curry leaves in the drink was perhaps the best example that afternoon of using an Indian element to change the soul of a Western dish or drink. 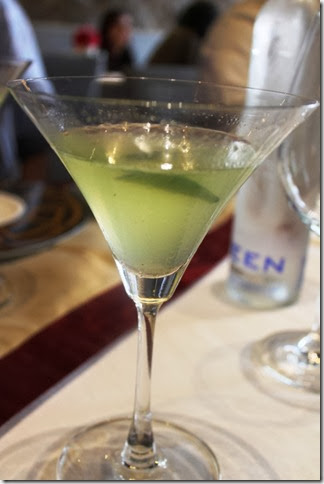 Their treatment of prawns was the best testimony of Masala Library being a ‘modern’ Indian place. Unlike a lot of Indian places, including high end ones, they don’t overcook their prawns here. We saw this in the exquisite, South Indian styled grilled prawns served with banana chips and curd rice. Then in the prawn 65 which didn’t have the red colour of the Andhra versions and was instead spiced with red peppercorns and then the prawns chettinad in the mains. They treat their prawns well at Masala Library and you are served some very juicy and well flavoured prawn dishes here. 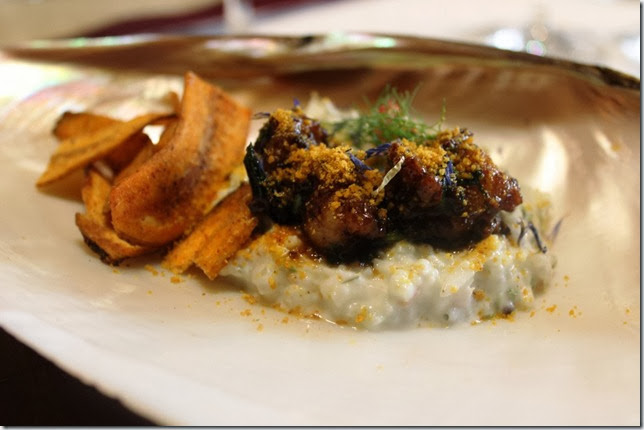 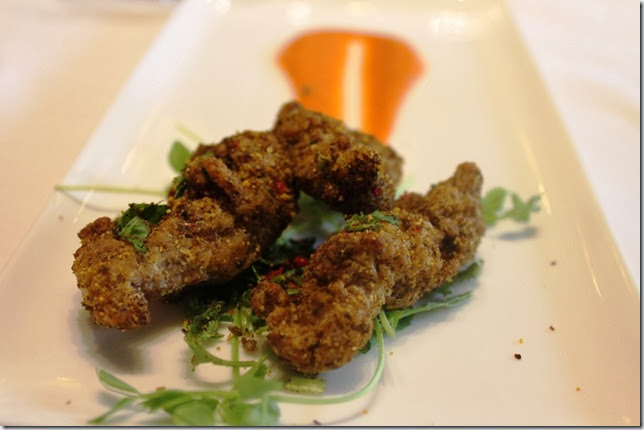 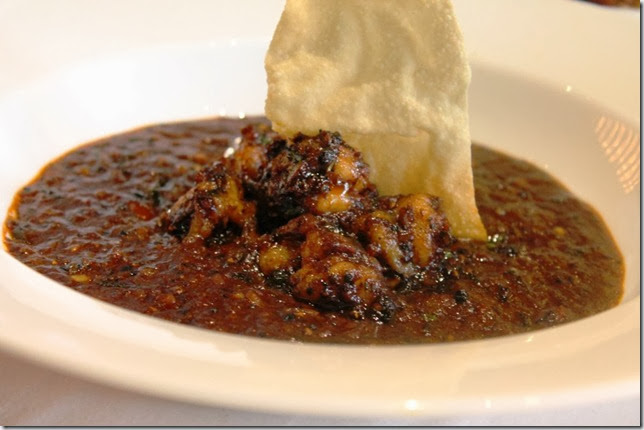 Chef Himanshu and his team has used lot of food gizmos here and we saw examples of that. A papdi chaat sphere, brownies with nitrogen smoke around them, and then a quick frozen mishti doi sorbet stick which had the taste of the perfect mishti doi but was so chilled that it overpowered the strawberry coulis served with it. 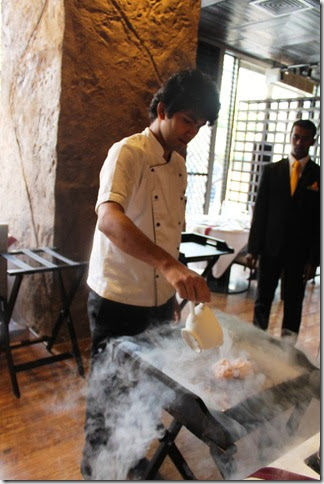 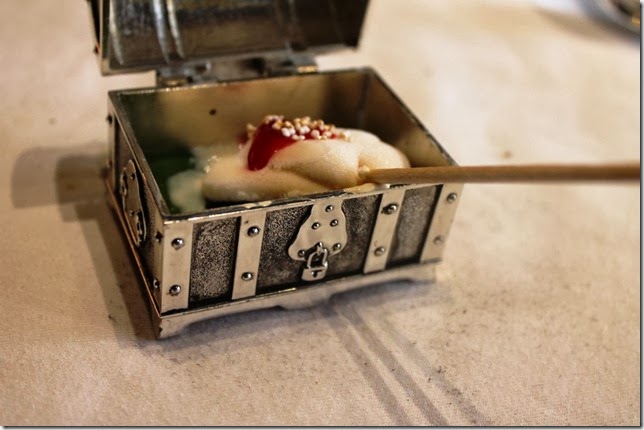 The best example of gizmos was the mushroom consommé. The shitake (I think) mushrooms were dried and carved in a way that they looked like tea leaves. The truffle oil dehydrated to look like milk powder. This was served with a hot water pouted out from a kettle. You expect tea and a you get a very well flavoured clear mushroom soup instead. The best example of razzmatazz meeting good taste that afternoon. 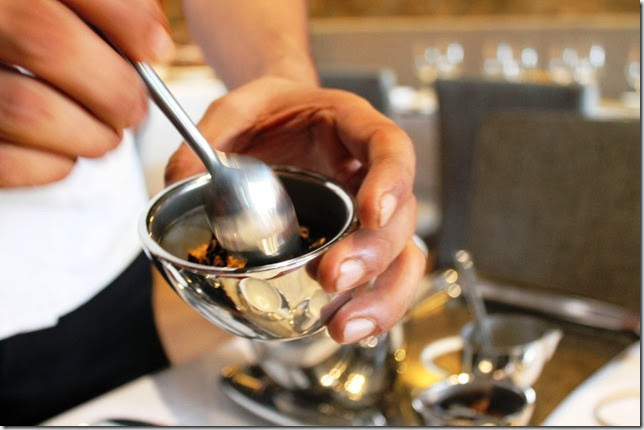 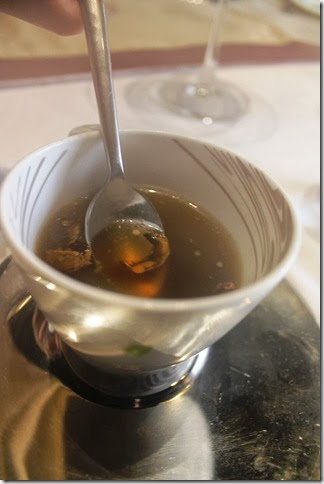 Zorawar had told us in the beginning that we would experience familiar flavours through the afternoon and in different formats and the meal was just that.

The papdi chat sphere tasted of the dahi and spice mix which holds a chat together. The sev puri on the go was regular sev puri served on a little rickshaw figurine. The galawati kebab tasted like a regular galawati but had the tartness of a Goan sausage fry which I was told was not intentional. It was served with a nice bhuna mutton, no beef or pork here. The presentation looked pretty of course. Whether it matched the thrill of eating kebabs at the original Tunday is questionable. 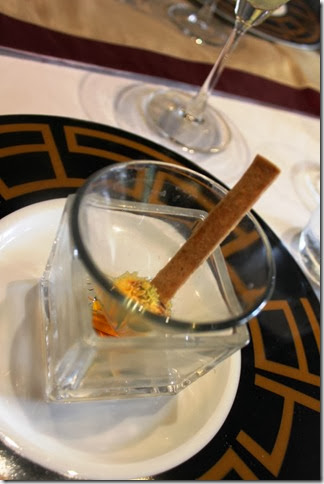 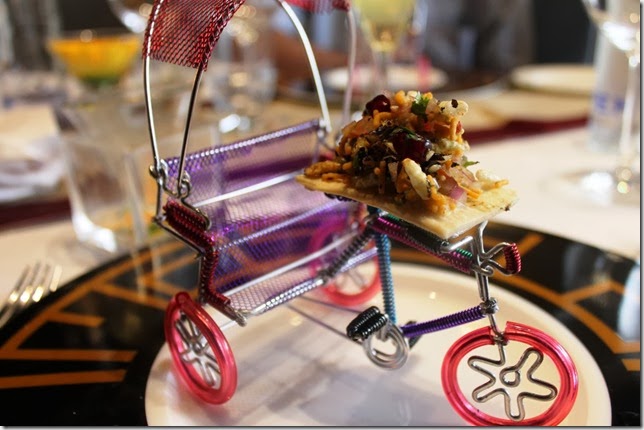 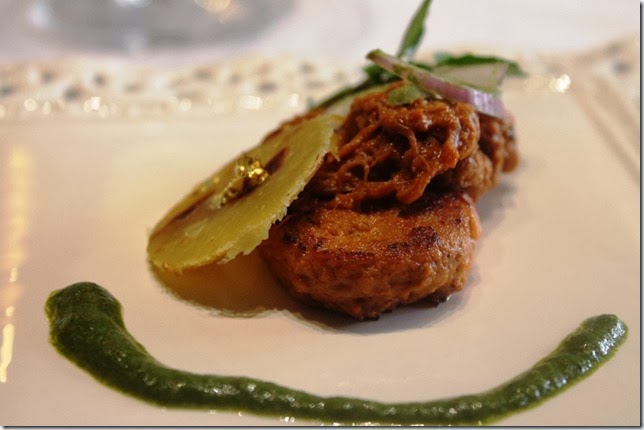 The gulab jamun carpaccio …well thinly sliced gulabjamun. The gevar cheesecake reminded me of a rasmalai. The ghevar base was supposed to replicate the biscuit base of a cheesecake and was overshadowed by the creamy layers. The jalebi caviare with rabdi was  presented very differently from your usual jalebi and rabdi…in your mouth it was still the taste of jalebi meeting rabdi. 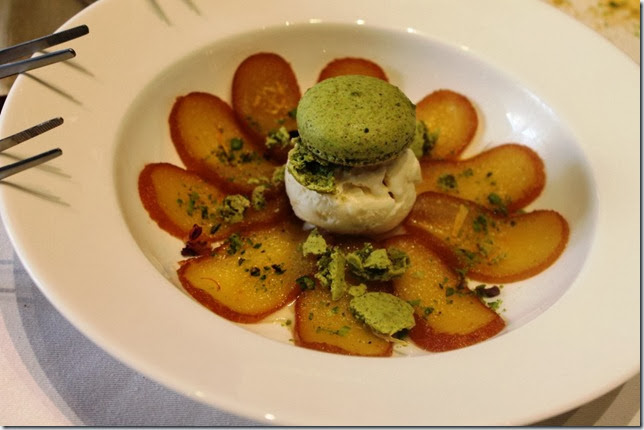 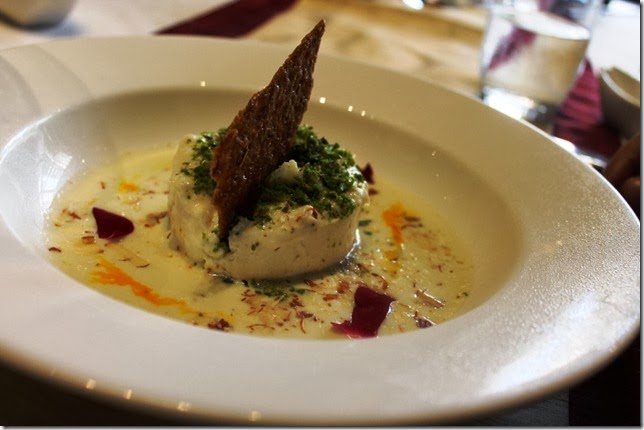 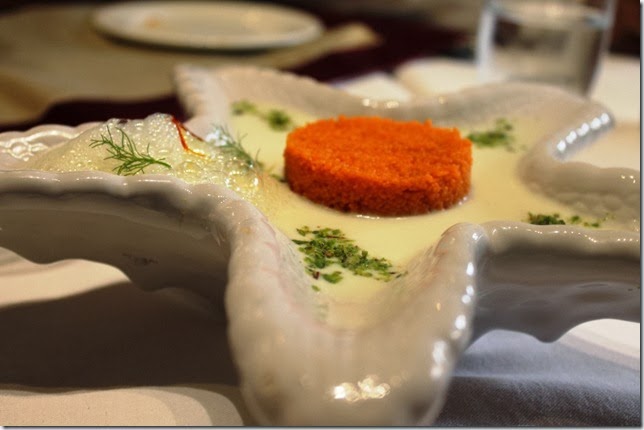 Then there was the kheema matar made with soya which I guess is for those who can’t eat meat but want its flavours. There were some spheres made with pea puree in the dish which didn’t really add much to the dish except visually. 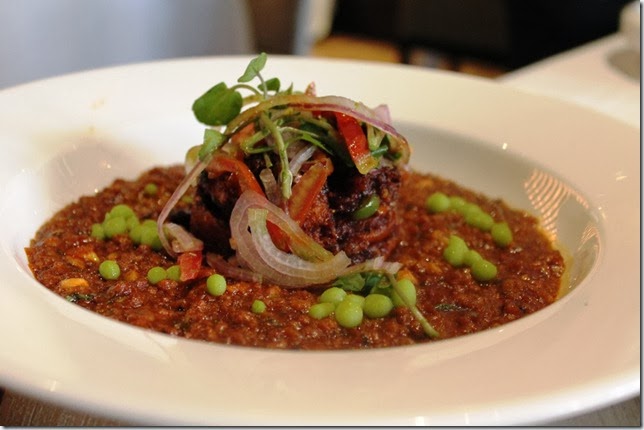 Amongst the other mains was very well flavoured butter chicken and a lal maas which was a tad salty and the meat didn’t really live up to the presenter’s billing of the ‘most tender mutton ever’. The mutton in the biryani of the newly opened Joseph’s tandoori kitchen in Bandra is more tender to start with. As is the mutton of the junglee maas at Handi in Jaipur. And in the mutton curry I made on Kali Pujo for friends. The mutton in the Masala Library’s laal maas was tender but definitely not the ‘most tender’. Nor did it have the chilli heat one associates with the dish. There was a dahi curry with churma and crisp bhindi in a Rajasthani styed combo. The yogurt base made the curry very interesting and helped it break through the heavy flavours of the other mains. The churma was lost in the curry though as was the bhindi (okra). 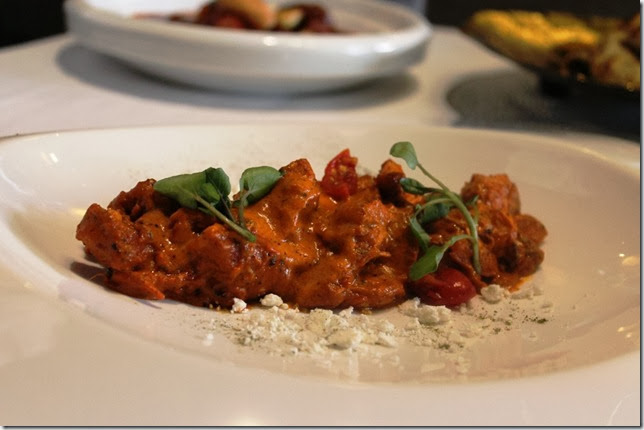 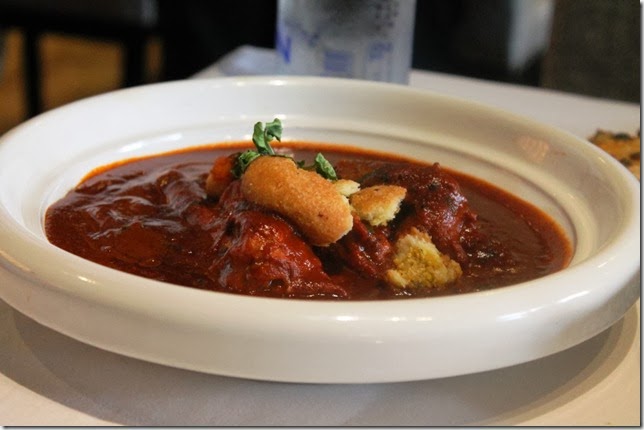 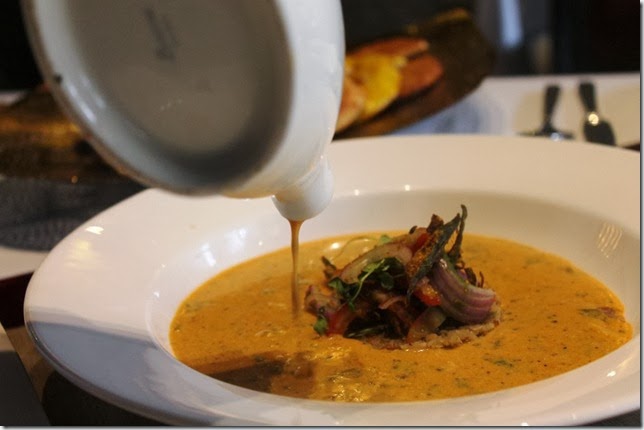 The food at Masala Library got me thinking. They had used modern techniques and equipment to experiment with food and present it differently. But what was the rational behind it?

On the other hand if one looks at the history of Indian food, kakori kebabs were softened with papaya for a Nawab who was toothless according to lore and couldn’t chew meat. The slow cooking on low heat technique of bara handis was developed to make discarded cuts of meat more edible. Ages back bitter gourd was added to shukto in Bengal so that the dish would act as an appetiser.

These are examples of food ‘technology’ or intuition used for a purpose. The interventions in Masala Library seemed directed more at the eye and were designed to enthral. While growing up we were told not to play with our food. Well this is a different time and this is a different philosophy of food that you get to experience at the Masala Library.

So if you like a show around your food, if you love Indian food but are bored by the way it is presented then the Masala Library could be a good place to dip in to. 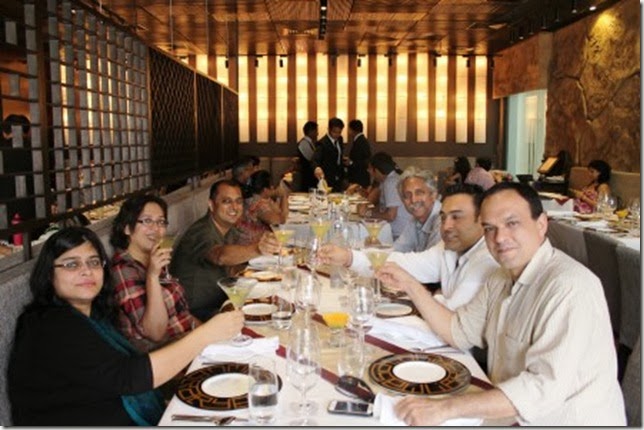 Zoe Perrett said…
So pleased you got to eat at Masala Library - has intrigued me for a while and as always, your walk-though was the next best thing to being there. A trademark thoughtful, balanced critique, never at risk of merely buying into the hype around Jiggs' food! : D
6 November 2013 at 18:14

Rhea Mitra Dalal said…
I couldn't agree more about prawns and how mistreated they are in most Mumbai restaurants! Nice to know the Masala Library treats them right.
The show and the gimmickery can be fun but ultimately it's the flavours that matter. I don't see the point of making spheres of pea purée when you can use peas in their natural form!
27 December 2013 at 22:31