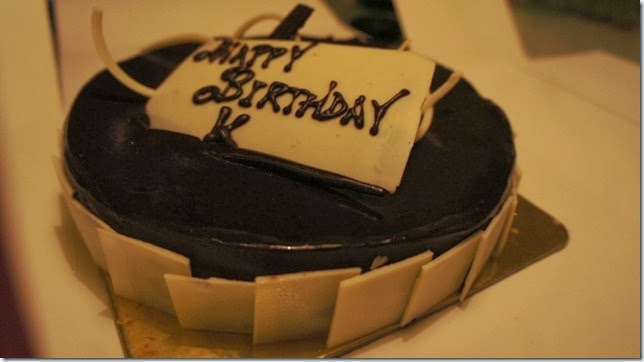 Bringing in the 40s

I must admit that I was quite apprehensive about this. In the run up to the forties I felt that I was getting really old. I wanted to desperately cling on to my 30s. I proudly said ‘39’ each time someone at the bank or the doctor’s asked me my age. I liked the sound of it.

Then the clock struck twelve and I was forty and guess what, it was not so cataclysmic.  It felt normal. I almost felt relieved. As if a great weight was off my back.

Well meaning folks on social media told me that 40s are the new 30s. But suddenly I felt that the forties being just that, the forties, wasn’t that bad either. I had also read that the forties are about making new discoveries and of seeing life in a new light.

Well, that happened. We went to the newly opened Smokehouse Deli in Bandra to bring in my birthday and in the process added a new restaurant to our list of Bandra favourites.

As the evening progressed the crowds at Smokehouse Deli which make it so difficult to get a table at nights made sense. This restaurant has opened where Yellow Tree Cafe used to be on Ambedkar Road and has a menu and look similar to the original branch at Palladium. The pastel shades of the lamps, the yellow glow of the lights, the cream walls with Bandra themed inscriptions make it a cosy place to sit at. We had booked and gone and got a table in the upper section.

We placed our order and munched on the bread from the bread basket which came in, well a quirky plastic shopping basket.

We fell in love with the place with our first dish, the chorizo piccante. Thin slices of piquant chorizo tossed with sweetish fried onions and rosemary baked potatoes which had a most seductive crunch to them. We had the happy smiles of having chosen well. 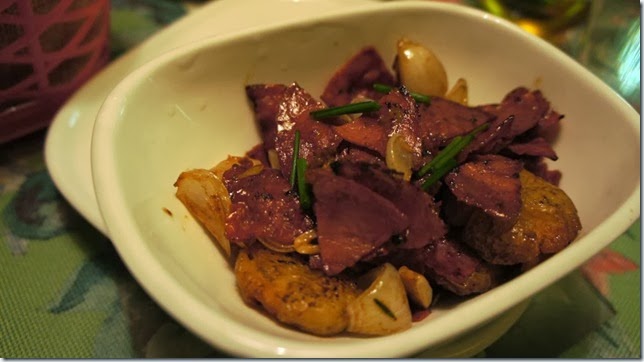 Next was a dish which I can only describe as molecular. Liver pate on a bed of apple jam on slices of baguette. Intriguingly the pate looked orange versus the usual light brown of pates. We took our first bites and were both awestruck by the sharp hit of liver that dominated the bite. The pate was unapologetically about the taste of liver. Not for the chicken hearted. We just loved it and longingly tried to make each bite last as long as possible. This is a dish for which the word ‘savour’ was invented. 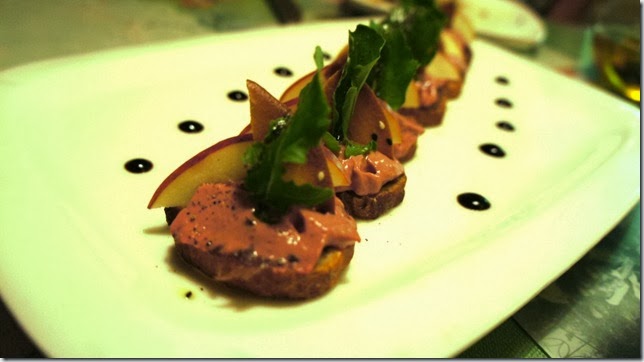 We decided to share our mains and went for the chilli encrusted John Dory and asked for grilled vegetables instead of the risotto that came with. The chilli and lime crust was very interesting though I found the Dory to be drier than the pan seared John Dory at big sister Salt Water Cafe. I looked up my last blog post and saw that even then I had found the John Dory here to be weaker than the Salt Water Cafe one. 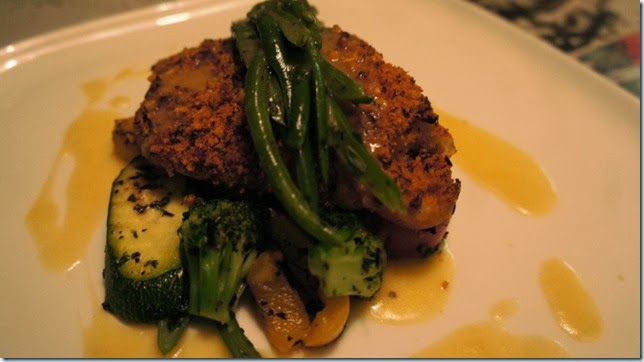 For desserts we had the lovely and gooey chocolate truffle cake that K had got me from Prego. The sweet folks at Smoke House Deli got us plates and a knife and wanted to even get a dessert from their side.

This cake was the reason why we went to Smokehouse Deli over Nido as the folks there said we couldn’t get a cake from outside and frankly attitude doesn’t sit well on me. Plus we ended up having a great experience.

As for Smokehouse Deli, we loved it so much that we went there for our Sunday Breakfast a couple of days later.

Breakfast starts at 10 am right now though I hear that they soon plan to start it at something called 5 am…a time of the day I have no wish to be acquainted with.

Unlike the busy night, breakfast was quite relaxed. We got a seat at the down stair section which I was more fond of in the Yellow Tree days. It’s cosier.

We ordered a 4 cheese scrambled egg which was as cheese laden as the name promised. The scrambled egg was more tight than runny. Mom in law who is a cheese lover couldn’t have smiled any wider. 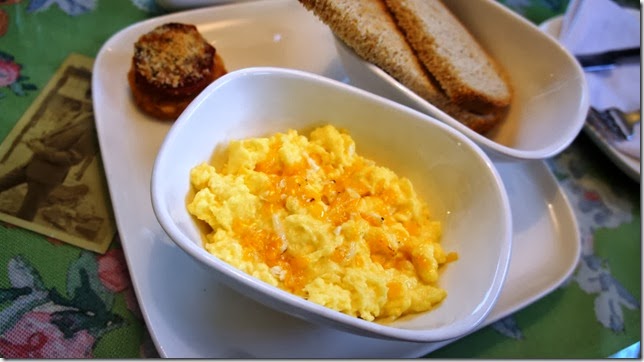 I went for an eggs benedict with smoked salmon which Wikipedia tells us is an Eggs Atlantic or an Eggs Hemingway. This was pretty delicious with the sharp taste of salmon beautifully balanced by the earthy tastes of the eggs and the Hollandaise sauce. The poached eggs were a bit firmer than normal and the yolk didn’t run out when cut which I believe is kosher. I liked it still. 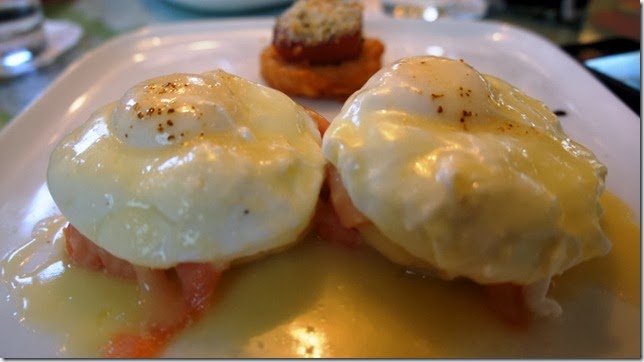 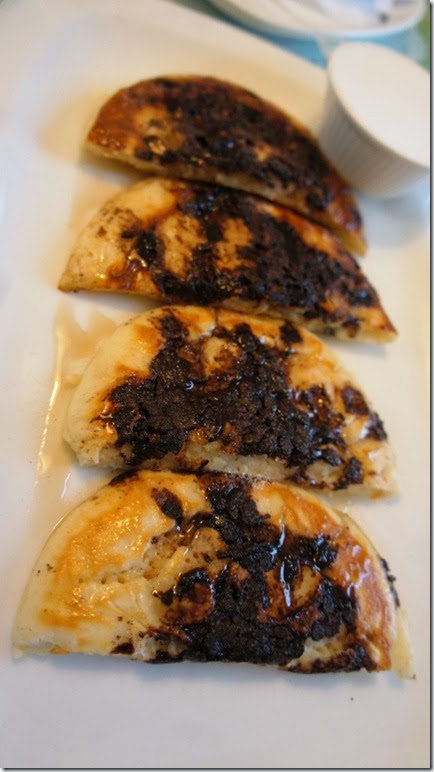 For our coffees I chose a Kenyan blend while K went for a cappuccino which she loved. I sipped a bit of the cappuccino and I must say that it is one of the best that I have had in Mumbai. Reminded me of the cappuccino that I had at Salvation Jane in London and in the cafes of Melbourne with its deep notes. 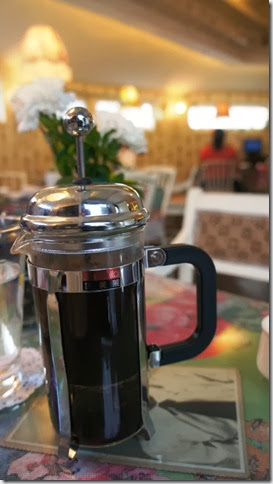 I guess that with Salt Water Cafe, Mocha Mojo and now Smokehouse Deli, Riyaz Amlani’s Impressario group dominates the list of our favourite restaurants in Bandra.

And, if you were wondering, roughly a week after I turned forty it still feels quite OK. 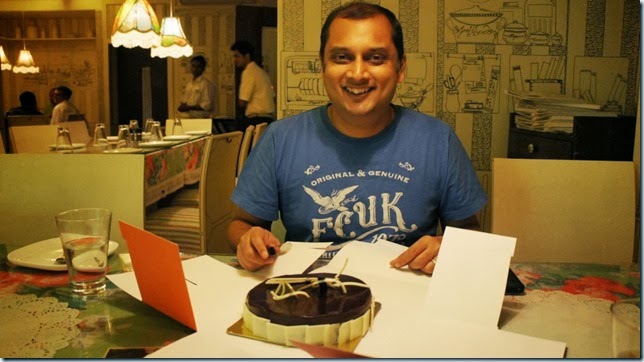 Talking of cakes I was really blessed this year. There was the luscious chocolate truffle that K got from Prego.

Then the folks from work had got this massive, stuff dreams are made of, red velvet cake from Theobroma with some delicious chocolate chip London Dairy ice cream to go with it

And then in the evening Pooja Dhingra of Le 15 Patisserie sent over a delicious strawberries and cream cake. All three are highly recommended and thanks so much guys for the cakes and wishes

Kalyan Karmakar said…
Thanks Sheikha, thanks Evolving Tastes
16 February 2014 at 13:36

Perzen Patel said…
A very Happy Birthday Kalyan! This definately looks like a delicious start to the new year :)
16 February 2014 at 16:36